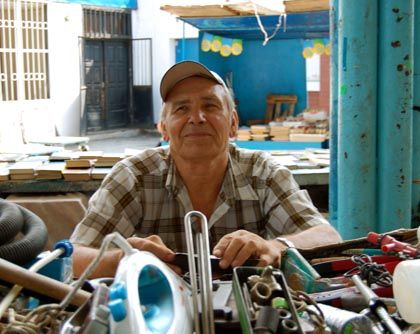 Vladimir Bazamyi is not happy about Ukraine's push to join NATO.

The market table in front of Vladimir Bazamyi in this Black Sea port is heaped with all manner of spare parts -- plumbing fixtures, an odd collection of tubes and hoses, an old iron. The 69-year-old vendor, though, is more interested in talking about his roots.

"I was born in Ukraine, and my first 19 years were spent there," he says. "But the rest of the time, for 50 years, I have lived in Sevastopol."

The fact that maps show Sevastopol as being located in Ukraine is a mere technicality for people like Bazamyi. The city is on the rocky, arid peninsula of Crimea, an autonomous republic of 2 million, the majority of whom are ethnic Russians. Here Russian is spoken instead of Ukrainian. Patriotic Russian songs blare from public loud speakers and its television shows are piped into homes. A statue of Lenin stands prominently on a hill above the city, pointing out across rooftops.

The people tend to think Russian, too. In this city and across the region, talk of grooming Ukraine for NATO membership -- a subject of heated debate at the alliance's summit this week in Bucharest -- is seen by many as a provocation. It is an attitude that hems closely to Russia's own strong objection to NATO membership for Ukraine and other former satellites.

"If Ukraine joins NATO, that would be a knife in the back of Russia," says Bazamyi.

For the moment, it appears as though Bazamyi can set his worries aside. NATO leaders on Wednesday night agreed that now was not the time to extend a Membership Action Plan -- the first official step toward NATO membership -- to Ukraine and Georgia, the other country in Europe's far east up for possible membership.

The decision not to go forward with integrating the two countries into the alliance is a blow to US President George W. Bush. Earlier this week, before the summit began, Bush visited Ukraine in a demonstrative show of support. But many NATO members, with France and Germany leading the pack, say that Ukraine and Georgia are not ready for NATO membership. In Georgia, they point to the difficulties the country is having with the breakaway regions of South Ossetia and Abkhazia. In Ukraine, many say the new government is still too fragile and not enough has been done to mend significant divides in the country.

Both critiques are somewhat disingenuous, as Europe is primarily concerned about not angering Russia at a time when the EU is trying to improve relations with the country. But when it comes to Ukraine, the divisions are indeed substantial. While much of western Ukraine supports both European Union and NATO membership, large populations in the east and south prefer closer ties with Moscow, instead.

That instability is most acutely felt in Crimea, where Russia has long had a military presence in the form of its Black Sea Fleet. Much of the population here links NATO membership inextricably with the question of Russian identity.

"The Crimea is very important and is probably affecting German and French thinking on the (NATO) issue," says Richard Weitz, a Russia expert at the Hudson Institute, a neoconservative think tank in Washington, D.C.

"Ukrainian nationalists view the Russian military presence on the peninsula as an encroachment on sovereign Ukrainian territory and complain about Russian interference in local affairs," Weitz says. "Crimean nationalists believe Ukrainian leaders pay insufficient heed to the distinct needs of their population and (want to) lobby Moscow to allow the primarily ethnic Russian territory to rejoin Russia." 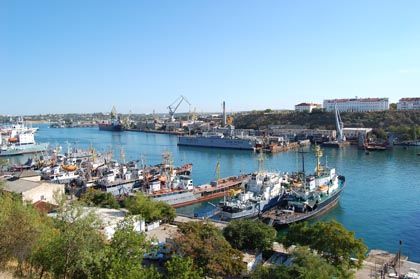 The Russian fleet is stationed in Sevastopol. But for how much longer?

In 1954, the USSRs Nikita Khrushchev handed the Crimea -- long a favorite holiday spot for Communist party brass -- to the Ukrainian Soviet Socialist Republic to mark the 300th anniversary of Russo-Ukrainian unification. It was little more than a symbolic gesture until the Soviet Union collapsed in 1991, which left Crimea a part of a newly independent Ukraine.

During the course of a number of interviews in Crimea, many people said they often feel like persecuted minorities: The state doesnt recognize Russian as an official language, and Ukrainian schools have been steadily squeezing out Russian ones across the peninsula. There is little feeling that Kiev is listening, while Russia offers €6 million for social programs in Crimean cities, according to local news reports.

"Crimeans are different. We dont think in the Ukrainian way. We think in the Russian way," said 20-year-old Svetlanya Drotsevich, while riding a bus leaving Yalta. "We turn out to be patriots of Russia. We will not betray Russia."

"Some (in Ukraine) are mostly for NATO and more European ways," she adds, "but frankly I dont believe in this."

The last time Ukraine tried to stage NATO exercises in the Black Sea -- inviting the US Navy to visit the Crimean port of Feodosiya in 2006 -- violent protests erupted among locals and the exercises were cancelled. Soon thereafter, the Crimean parliament voted to declare the peninsula a NATO-free zone.

For years, Sevastopol has been home to 14,000 Russian naval officers who are stationed in barracks around the sweep of the citys harbor, part of Russias Black Sea Fleet, which is headquartered here.

The fleet is a major source of pride for locals like Sergei Malyshkin, who stops by the citys monument to the Soviet Unions 12 "Hero" cities that stood up to Nazi invasion, Sevastopol among them. He points it out to a visitor and ponders it intently, like a painting on a museum wall.

But the Black Sea Fleet also keeps tensions between Kiev and Crimea high. NATO membership would would make it necessary for Russia to move the fleet, and already it seems that both Ukraine and Russia are preparing for that reality. Despite the €60 million ($94 million) in rent Russia annually pays Ukraine -- in the form of debt write-offs for Russian energy supplies -- to keep the fleet in Sevastopol, Ukraine says it will not extend Russias lease beyond 2017, when it expires, and has been pushing for closure of the base even before the agreement runs out.

Russia, for its part, is currently building a new naval base across the Black Sea, in the Russian port Novorossiisk, to be completed in 2012.

Some politicians have played up fears that a greater wave of Russian nationalism could surface here if the fleet is kicked out of Crimea and replaced by NATO, a suggestion that the peninsula feels theres more security in Russias shadow than there will be under NATOs umbrella.

As long as the Russian fleet is stationed in Sevastopol, the Crimea will be stable and calm, Ukrainian Transport Minister Mykola Rudkovsky told a Crimean TV channel last fall, according to the Interfax news agency. As soon as the fleet leaves, things we did not expect to happen will begin to happen.