Bulky diving cylinders, decompression equipment and diving suits: the deck of the vessel Loyal Mediator is cluttered with all the things the wreck divers need.

"Dives in Scapa Flow aren't for beginners," says Horst Dederichs. "Some of the warships lie fairly deep down, the water temperature is just 9 degrees Celsius (48 degrees Fahrenheit) and you can get dangerous currents at the edge of the bay."

The 39-year-old historian and diving instructor is one of Europe's leading experts on exploring underwater wrecks. He was the first German to explore the wreck of the Lusitania at a depth of 93 meters (305 feet) below the surface of the Irish Sea. Dederichs regards Scapa Flow as Europe's most interesting wreck diving area. There's no other location where you find so many ships so close together.

The destination for today's dive is SMS Markgraf, a king class battleship with a length of 175.4 meters (570 feet) that lies upside down on the seabed 45 meters (147 feet) down.

Dederichs lets himself sink slowly into the dark green water down a cable laid from the boat. He has two diving cylinders on his back that contain Trimix, a special gas mixture of oxygen, nitrogen and helium.

The two bottles are connected via a bridge that contains two breathing regulators, a security feature for cold-water dives. In the cold, breathing regulators can freeze up and blow gas out of the cylinder. If that happens, Dederichs can block the connection and transfer his air supply to the other cylinder.

At a depth of 25 meters, the first outlines of the steel giant emerge amid the green murk, and shortly after that Dederichs has reached the hull. The ship once had a crew of 1,100. These days it's populated mainly by spider crabs bigger than tennis balls. They scuttle off to escape the beams of the underwater lamps.

"Warships usually lie upside down or on their sides due to the heavy superstructures," says Dederichs. "When you land on their mighty hull you feel like an ant exploring a sleeping whale." Dederichs glides along the hull looking for suitable entry points.

In the light from the strong lamps, aerials come into view, then the crow's nest becomes visible and one of the many deck guns. A frightened crab hurriedly scrambles to safety down the barrel. Suddenly the divers come across a hole in the hull. A large cod darts out as the explorers enter gingerly. Details emerge in the beam of Dederich's lamp: rust-brown walls, bent pipes and small hand-wheels that will never be turned again. And a boot. 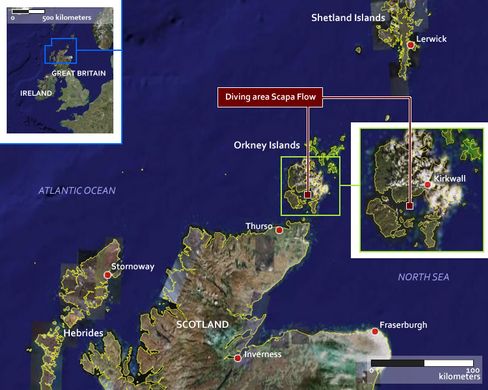 Map showing the location of the sunken German fleet at Scapa Flow.

It's only possible to see a few meters ahead, and if the divers make a wrong move and whirl up the fine dust-like sediment that covers the entire ship, they won't be able to see anything for hours. That's how long it takes for the sediment to settle again, and this far down, divers don't have that kind of time.

Dederichs has run a cable from the entrance to the ship to guide him back outside. Too many wreck divers have lost their lives by getting lost in the labyrinth of passages in the submerged steel giants.

On June 21, 1919, SMS Markgraf was interned in the British Royal Navy base at Scapa Flow, together with 73 other ships of the Imperial German High Sea Fleet moored there under the terms of the Armistice that had ended World War I in November 1918.

The internment was to last as long as it took to decide on the fate of the German fleet. But on June 21, it became clear that the British were not prepared to release the ships. To prevent the heavily-armed ships from being seized by the victors of World War I, German Admiral Ludwig von Reuter decided to scuttle the fleet.

At his command, 59 warships sank in front of the Orkney Islands. Many of them were later raised and turned to scrap. Markgraf wasn't spared -- huge steel plates were cut from her hull and her engines were also retrieved. Parts of the wreck are as permeated as Swiss cheese, making it ideal for professional wreck divers like Dederichs.

Panic Lurks in the Confined Darkness

"Entering deep into large wrecks has little in common with normal sports diving," says Dederichs, who has been on several thousand dives. "These dives demand vast experience and corresponding levels of training. The deep, the cold, the darkness and the confined environment frequently cause anxiety in inexperienced divers, and that often develops into panic."

Is he ever afraid during his dives? "Down there you work like a machine. It's good to have respect but you shouldn't be afraid," says Dederichs.

He advances ever deeper into the belly of the ship. It's virtually impossible to orient oneself exactly inside this monster, he says later. He gradually glides towards the stern, past steel shelves covered in rust and sea anemones.

As he passes through the vessel, Dederichs tries to imagine what could have happened in this particular room, or what that particular lever was for. Who sat on the chair, what was his task on board? Wreck dives are a descent into the past, they're an attempt to lift the veil of time and to enter a long-gone epoch.

One question nags at the historian: how did the reduced German crew manage to prepare the scuttling of the ship so thoroughly under the watchful eyes of the British 89 years ago? He hasn't found a satisfactory answer. Not yet, at least.