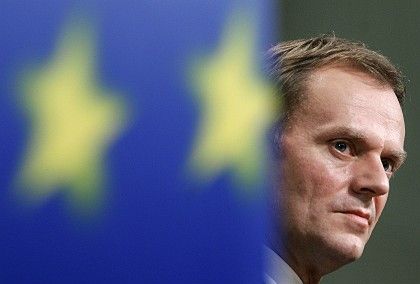 Poland's new prime minister, Donald Tusk, opened a new chapter in his nation's relationship with the European Union on Tuesday with a visit to Brussels, but he also had critical words for Russia's parliamentary elections which indicated an ongoing chill between the two Slavic nations.

"Alongside others who have fought for the European Union," Tusk said in English, "I will stand up and defend the European interest."

He also said Poland might revisit an earlier decision to opt out of a European human-rights charter in the new EU reform treaty that will replace the failed draft constitution. Poland's previous conservative Catholic government rejected the charter, in part because of language about the death penalty and gay rights protections.

Tusk told reporters that Poland could reconsider that decision after the broader reform treaty is signed and implemented in Poland. Doing so before then could hurt chances for ratifying the reform treaty, he said.

Tusk won power in October from his nationalistic predecessor, Jaroslaw Kaczynski. Tusk's liberal, pro-business leanings are seen across Europe as a relief from the anti-European tone of Kaczynski's leadership.

"It's a real pleasure to receive my good friend Donald Tusk," EU Commission President Jose Manuel Barroso said on Tuesday. "Poland is a very important partner, and the voice of Poland matters."

Jaroslaw Kaczynski and his twin brother Lech, who still serves as Poland's president, seemed to resent having to cooperate with the EU after coming to power in 2005. In 2007 they almost collapsed delicate negotiations over the EU reform treaty by insisting on a greater share of the European vote for Poland -- based on the 6.5 million Poles killed by Germans during World War II.

"They seem not to have got the idea of give and take," one senior Brussels diplomat said, according to the DPA news agency.

Relations with Poland's eastern neighbor, Russia, were also strained under the Kaczynskis. But two days after widely criticized parliamentary elections in Russia -- which saw President Vladimir Putin's party double its power in the Duma, or lower house -- Prime Minister Tusk was not in a conciliatory mood

"We should not in Europe be tolerant of a situation where certain democratic standards are being broken," he said, referring to Russia. Tusk went on to describe Russian opposition leader and former chess champion Garry Kasparov, who spoiled his ballot on Sunday in protest, as "my political friend."

The comments were in line with an EU statement released Tuesday which expressed "regrets" about "many reports and allegations of media restrictions as well as harassment of opposition parties and NGOs" during the Russian campaign season.

But it stood out sharply against French President Nicolas Sarkozy's reaction on Monday. Sarkozy made a personal phone call to Putin to congratulate him on Sunday's landslide. Both human rights groups and members of the EU objected to the French president's zeal.

"Sarkozy's reaction, which was totally isolated, is both incomprehensible and scandalous," said Patrick Baudouin, president of the Paris-based International Federation of Human Rights, according to AFP.