Nicolas Sarkozy's weekly agenda looks like a political marathon these days. On Monday, a meeting with Spain's prime minister in Madrid; on Tuesday, shaking hands with farmers in the Midi-Pyrénées region; and, on Wednesday an invitation to business and labor leaders for a crisis summit in Paris. Meanwhile, Thursday offers up a welcome address to companies in Lyon, Friday includes New Year's greetings to the diplomatic corps, and Saturday is a detour to the overseas department of Guiana.

Every day features a media-worthy event, a weighty announcement and, therefore, an opportunity for generating headlines and gripping TV images. Almost three months before the first round of the presidential elections, France's head of state has dusted off his role of "hyper-president," which characterized the first phase of his time in office. The effect of the G-20 summit in Cannes and the accolades from US President Barack Obama? Forgotten. The New Year's address full of rousing appeals? Over.

Sarkozy shuttles quickly back and forth between Paris and the provinces, and though officially not a candidate, in reality, he is already in campaign mode. He is a haunted, restless president, battling his crumbling popularity amid economic misery. He faces rising debt, a growing budget deficit, endemic unemployment and then the embarrassing downgrade by the ratings agency Standard & Poor's last week. Sarkozy seems both stricken and nervous.

Despite a temporary rise in the poll ratings for Sarkozy, most opinion researchers are currently predicting a clear victory in the French election for Francois Hollande, the candidate of the Socialist Party (PS).

Even among Sarkozy's faithful followers, the negative ratings have caused widespread anxiety. "He has been hit and is groggy, like a boxer on the ropes," the newspaper Les Echos, which is close to his conservative UMP government, recently quoted a prominent member of the party as saying. The statement came after the president gave a hot-headed response at a news conference in Madrid to a question about the ratings downgrade. Others are even worried because Sarkozy, instead of looking like a fighter, recently displayed a "crestfallen facial expression."

He has enough reason to do so. In France, feelings of dissatisfaction, hostility and sometimes even bitter hatred run deep toward the president. Sarkozy -- once ridiculed as buddy to the Glitterati, a friend of the rich and the king of scandals -- wanted to bring the country in line with the practices of the 21st century with his "policy of disruption." But even among conservative voters, these targeted attacks on old taboos were seen as an attack on the symbols of the Republic. And the mix of the private and public spheres -- displaying both marital crises and domestic bliss -- proved to be a faulty attempt at generating sympathy for the president.

Now, at the end of his term and beyond the emotions, it is the hour of reckoning. A flood of books, articles and comics are portraying the Sarkozy era as over.

In the weekly news magazine Nouvel Observateur, an entire team of former ministers and colleagues have unloaded their frustrations with the president:

"The French know by now all facets of his personality," says Brice Teinturier, head of the research firm Ipsos. "But they want a steady and protective hand."

Meanwhile, the president acts according to his proven pattern of behavior: always in action, always on the attack. Employing a "Strategy of the Moving Target," according to the newspaper Canard Enchaîné, the Socialist candidate should, above all, be exposed as bland and lacking in ideas. At meetings, to the surprise of even German Chancellor Angela Merkel, Sarkozy pulled out the idea of a financial transaction tax, the so-called "Tobin Tax" that he himself had once called "absurd." Then he stunned observers with his proposal for a "social value-added tax" and announced a dramatic "crisis summit" with labor and business leaders, which took place earlier this week.

The four-hour meeting on unemployment did not deliver agreement on the major sticking points. The unions rejected the suggestion to lower the incidental wage costs of companies as a counter move to what they call the "unsocial VAT." An increase in the VAT would primarily affect the low-income population in France. What remained at the end of the meeting were a host of promises, which the president hopes will improve his image shortly before the end of his term.

With his powerful voice and his demands for "courage" and "cold-bloodedness," Sarkozy presents himself as an experienced leader during a time of crisis and globalization.

In doing so, the head of state is freely putting all his eggs in one basket. Indeed, even if his followers ensure that Sarkozy turns the corner, it remains unclear if the "new measures" he plans to introduce to the French on TV before then end of January will bring a positive response. This strategy of promoting unpopular measures as "brave" or "cold-blooded" has been characterized by the left-wing newspaper Libération as the risky move of a "kamikaze President."

"The atmosphere definitely has something of a doomsday feeling," one foreign diplomat said of the political melee in Paris. "Maybe the president has been looking beyond the election and is possibly already working on his historical legacy. Were Nicolas Sarkozy to be defeated by Hollande, he could then at least gloat over the fact that he sacrificed his career for the future of France." 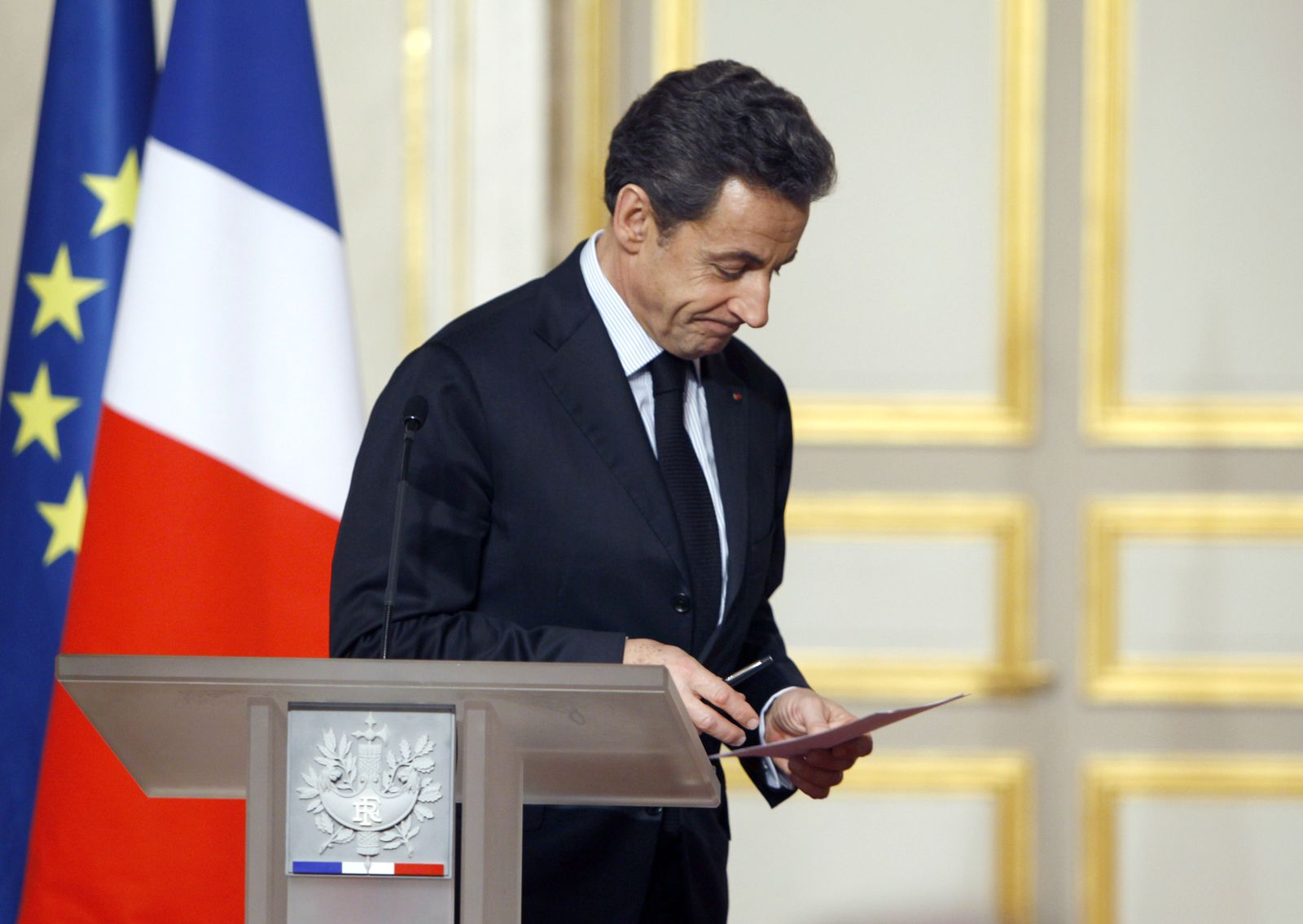 French President Nicolas Sarkozy leaves after a crisis summit with business and labor leaders in Paris on Jan. 18.