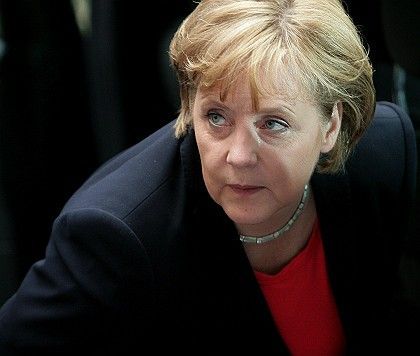 German Chancellor Angela Merkel is trying to cajole the EU leaders into agreeing to a new draft treaty. A task that has been described by some as trying to herd cats.

Everyone had warned that the negotiations at this week's crucial European Union summit were going to be tough. The EU leaders have gathered in Brussels to hammer out a deal to replace the now defunct European constitution. But while some may have been hoping against hope that the posturing at home would give way to compromise in Brussels, it seems that instead most leaders are digging their heels in and are even finding new issues to argue about.

The delegates to this week's European Union summit were told to take an extra shirt -- the talks are expected to go on well into Friday night, and even Saturday morning. Summit host German Chancellor Angela Merkel is reported to have presented a revised draft treaty to EU leaders late on Friday afternoon. Now they are going to have to pull up their shirtsleeves and look for a compromise.

The summit is intended to resolve the issues that divide Europe, but over the course of the last 24 hours it seems that European leaders have failed to make any headway on outstanding issues, but have added more points of division to the pot.

While Poland and the UK had already laid out their opposition to the treaty, French President Nicolas Sarkozy was one of its main promoters. But France's attempt to persuade EU leaders to drop a reference to the goal of "undistorted competition" in the treaty has succeeded in putting another spanner in the works.

Under the original proposal, one of the EU's main objectives was listed as an "internal market where competition is free and undistorted." But France persuaded Germany, current EU president, to put a full stop after "internal market" in the new treaty. This may have intended for domestic consumption, but the UK and the Commission have found it distinctly unpalatable.

Blair Looking for Clarity from Sarkozy

Blair met with Sarkozy on the sidelines of the summit on Friday to discuss the issue. Afterwards a spokesman for Blair told Associated Press: "The best way to summarize the discussion is that there will be a need for clarity on this issue." A French spokesman said Sarkozy was sticking to his guns and insisting that the reference to competition not be reinserted.

France's move is part of a longstanding disagreement between Paris and other nations over how the EU should deal with globalization. Blair and European Commission President Jose Manuel Barroso have been in favor of making the EU attractive to business by adopting more liberal economic policies. But other governments would like to be able to bail out struggling national companies.

Meanwhile, Sarkozy's push to have a "mini-treaty" accepted has met with opposition. Luxembourg's Prime Minister Jean-Claude Juncker said the expression meant nothing. "Eyeryone agrees we must find an agreement to improve the functioning of the European Union, and to maintain a good amount of substance of the constitutional treaty." And European Parliament President Hans Gert Pöttering said that the parliament had demanded a substantial treaty and didnt want "a treaty without substance."

Britain has also indicated that it would take a tough line in negotiations. Earlier in the week Tony Blair had talked about "red lines" that would not be breached: London is objecting to the Charter of Fundamental Rights, has questioned the role of a single EU foreign minister and does not want to give up British control over justice, foreign policy or tax and benefits arrangements.

Austrian Foreign Minister Ursula Plassnik said on Friday that Britain's position was if anything hardening. "This is a development that should worry all of us, including Britain," she told Reuters.

Poland Not Giving In

As for the issue that everyone was expecting to the main sticking point, the Polish opposition to the new voting system -- there seems little sign of progress here either. Poland has called for a change to the proposed "double majority" voting system, which is says favors larger countries, particularly Germany.

Poland's intransigence has succeeded in enraging many European leaders in the run up to the summit, and they did themselves few favors by chosing to bring up Poland's treatment at the hands of Nazi Germany during World War II just a few days before the summit.

Since the summit began on Thursday evening, Chancellor Angela Merkel has held talks with Polish President Lech Kaczynski three times in 12 hours, but Warsaw is still digging in its heels.

After the EU leaders met on Friday Czech Prime Minister Mirek Topolanek told reporters that Kaczynski "froze the debate" by ruling out any compromise on the planned re-weighting of voting powers. And he added that Britain was also causing problems by sticking to its "red lines."

But there is some progress. Reuters reports that EU leaders reached broad agreement on the job title, role and powers of the bloc's future foreign policy representative.