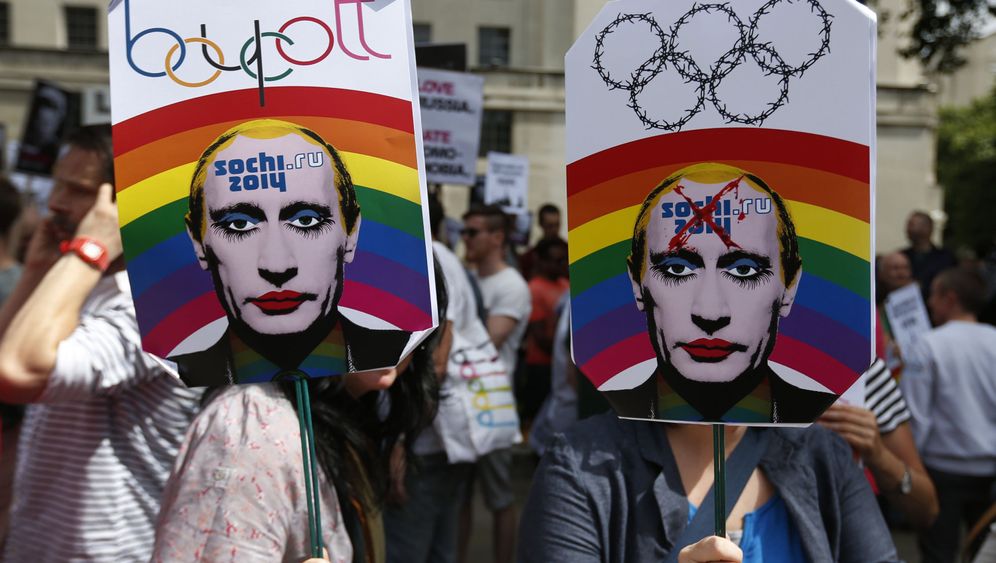 Andrey Kavaltshyan's transformation into Shushu begins at midnight. At the Mayak nightclub, he powders his cleavage, puts on a gold-colored sequin dress and slips into pumps. Swinging his hips, he struts onto stage. He is now a drag queen in Sochi, a familiar figure in the southern Russian city, partly because he was one of the first openly gay men in the Soviet Union.

Kavaltshyan, 44, performs a schmaltzy love song. Then another drag queen, Armen, aka Brenda Bond, who has flown in from Moscow, performs the title song from "Cabaret" in a Liza Minnelli outfit with garter belts and a blond wig. When he is finished, Armen steps up to the microphone, and says: "To the foreigners in the audience and the visitors to the Winter Games, welcome to Russia, welcome to Sochi and welcome to my anus."

This is what gay Russia looks like in Sochi, the host city of the 2014 Winter Olympics. Outside, workers are erecting hotels and high-rise buildings, excavating and hammering away, so that everything will be ready for the Winter Games in just under three months. Andrey and Armen are the only thing that could get in the way now, or rather, a boycott of the games because of Russia's anti-gay policies.

In June, Russia's parliament signed a controversial bill into law that bans "propaganda of nontraditional sexual relations among minors." It serves as an excuse to incite hatred against gays and lesbian. This is a popular position in Russia, where 85 percent of the population opposes same-sex marriage.

There have been many assaults on homosexuals since the law was passed. Gay organizations report that they are now often asked about the possibility of seeking asylum abroad. City council members in St. Petersburg openly announced that it was acceptable to physically assault marchers in gay pride parades. A politician in eastern Russia proposed using Cossacks and paratroopers to publicly whip gays and lesbians because, as he said: "After all, that's what the ass is traditionally made for."

Homosexual athletes, in particular, face a dilemma: Should they remain silent, as Olympic officials are demanding? Or should they protest? American actor Harvey Fierstein has compared President Vladimir Putin's games with Hitler's 1936 Munich Olympics and called for a boycott.

And how does a gay man in Sochi address the issue?

When the show is over, after the performers have ranted about the costs of almost €38 billion ($51 billion), and about the figure-skating building, which looks like a pair of ample buttocks, Kavaltshyan talks about the law. He doesn't like it, because it incites hatred of gays and lesbians. But he isn't against Putin, he says, and why should he be? "Our president has such sensual lips and such a toned body."

Should there be a boycott? Absolutely not, he says.

Sochi, he says, is actually a tolerant city. Already since the Soviet days, there has been a gay section next to a nudist beach. "Sometimes I lie there in a bathing suit and a wig and enjoy attracting stares," he says. But, of course, there are also open expressions of hatred against gays and lesbians. There is, for example, the case of a 17-year-old high-school student who fellow students recently spotted in Lenin Park, a traditional gay meeting point. He was tormented so much afterwards that he was forced to switch schools.

Kavaltshyan and two other men dressed in women's clothing were chased by teenagers years ago, and they only managed to get away by running into the club. Kavaltshyan sighs. He doesn't want to talk about the issue, and he says that he is upset about the people who "try to get me to say how terrible the situation is for gays in our country." But, he adds, many things have improved for homosexuals in Russia. "I know what I'm talking about," he says. "In the late 1980s, I was one of the first to stop making a secret of being gay."

When Kavaltshyan began wearing his sister's clothing, at the age of seven, and when he had sex for the first time at 13, "sexual relations between men" were still punishable by up to five years in a prison camp. "I didn't think much about it," he says. "I didn't even know that it was banned." It was only President Boris Yeltsin who, in 1993, revoked the law, which was originally enacted under Stalin.

Kavaltshyan had just moved from his hometown of Apsheronsk to Sochi. After initially working as a cook, the new freedoms that came with the fall of the Soviet Union enabled him to capitalize on being gay and make money in the process. He has been performing as a drag queen since 1995.