The sum is enormous: €6 billion ($7.9 billion) is how much the Irish government wants to cut from the public finances next year. The drastic course of treatment, the fourth budget in two years, was passed by the Irish parliament late on Tuesday night. It will be a huge test of strength for the small country: The average Irish household will be €7,500 worse off by 2012, according to the Irish Independent.

The Dublin government has been congratulated and encouraged from across the European Union for being so brave in sticking to its austerity goals. The unemployed, low-income workers, pensioners, students -- hardly any sector of society has been left unscathed.

Yet this huge national sacrifice will not significantly improve the country's massive debt problem. The sometimes severe cuts to social welfare payments, public sector pay and state investment pale into insignificance when compared to the massive gaps in the Irish banks' accounts. That is why investors are continuing, undeterred, to speculate on Ireland's eventual insolvency.

The bailout loan of €85 billion that the EU, the European Central Bank and the International Monetary Fund agreed to extend to Ireland just over a week ago had failed to calm market jitters. And why would it? After all, it actually exacerbates the country's financial problems.

The EU has failed to make the foreign bondholders take a hit on the losses from toxic real estate loans. In particular, the ECB insisted that the interests of the German, British and French banks would continue to be protected. Instead, Irish taxpayers are being asked to pay the bill: at a hefty interest rate of 5.8 percent, to ensure the foreign creditors will get their money back rather than face any losses.

That may be something German banks welcome, but it is a disaster for Ireland. And many economists now predicts that it is just a question of time before the country defaults. "This 'bailout' will sink the Republic," warns economist David McWilliams in the Belfast Telegraph. "It is the EU giving us enough rope to hang ourselves in the hope that we don't hang all of them."

If Ireland fully exhausts the EU bailout then it will double the national debt to €175 billion by 2014, he calculates, and the interest on that would come to €8.5 billion a year -- more than even the thriftiest of governments could afford.

To make sure that the state does not drown in its debts, the annual rate of growth has to be significantly higher than the interest due on the national debt, McWilliams argues. If the Irish economy does not grow by 8-10 percent, then the country will end in a debt-deflationary spiral. And even the most optimistic government projections are just below 4 percent.

Barry Eichengreen, a professor of economics at the University of California, Berkeley, makes a similar argument. It would be neither politically nor economically sustainable to force Ireland to pay 10 percent of its national income as reparations to bondholders, he wrote recently in German business daily Handelsblatt, "as anyone who remembers Germany's own experience with World War I reparations should know." It would be more sensible to have a debt restructuring and offer the bondholders 20 cents on the euro, he argues.

Such a restructuring would with one fell swoop cut the Irish public debt from 130 percent to 100 percent of GDP, he says. And it would have shown the Irish that the European Union was on their side, writes Kevin O'Rourke, economics professor at Trinity College Dublin, for the Eurointelligence website. Instead the EU is forcing "pro-cyclical adjustment onto countries that are already sinking."

'We Face a Negative Spiral'

O'Rourke's prognosis is as foreboding as that of his colleagues. "We now face a negative spiral in which austerity causes emigration, which increases the burden of the debt, which ultimately leads to more austerity," he writes. He recommends as a way out the path pursued by Iceland. In a referendum, the voters rejected a proposal to pay back their banks' international creditors. Ireland, O'Rourke argues, needs a "radical change."

The Irish government, however, is determined to play according to the EU's rules. It is above all about credibility on the financial markets, argues Irish Finance Minister Brian Lenihan, who was just named Europe's worst finance minister by the Financial Times.

The budget that he presented to the parliament on Tuesday, a mix of cuts and tax hikes, will just further depress an already weak economy. And the cuts will continue: According to the government's four-year plan, which it unveiled in November, a total of €15 billion will be cut by 2014.

It is, however, doubtful if the government will be around long enough to implement its plans. Although the budget itself passed through the Dáil, the Irish parliament, with the backing of some independent parliamentarians, the next government, due to be elected in spring at the latest, will likely make changes to the plan.

And the austerity measures will achieve little if Ireland does not get a handle on the problems with its banking sector. It is still the country's Achilles' heel. Ever since the Irish government's fatal decision to provide a blanket guarantee for all debts and deposits at the banks, the fate of the state has been linked to that to the financial institutions. And those toxic debts left over from the real estate boom are still lurking in their accounts.

The banks have already started erasing those toxic debts from their books -- either by moving them into the state's so-called bad bank, NAMA, or by selling them on at a discount price to investors. However, no one has been able to calculate yet exactly how high the losses are.

Of the €85 billion EU/IMF loan, €35 billion alone is earmarked for the Irish banks. And €10 billion of that is to be a direct capital injection, while the rest will be kept as an emergency fund. Aside from the scandal-hit Anglo-Irish bank, the country's two biggest banks, Bank of Ireland and Allied Irish Bank, will soon be majority-owned by the state.

The size of the EU/IMF bailout was calculated on the basis that the banks could bear a default of up to 10 percent on all mortgages. This super-stress scenario would cost around €15 billion, according to the Irish financial regulators. The rescue package would suffice for that.

However, the high interest rates mean that Ireland has no prospect of paying back the loan. There remains only the hope that the government won't have to avail of all the funds. But no expert believes that this will be possible -- after all, the Irish banks have repeatedly sought fresh capital over recent months. 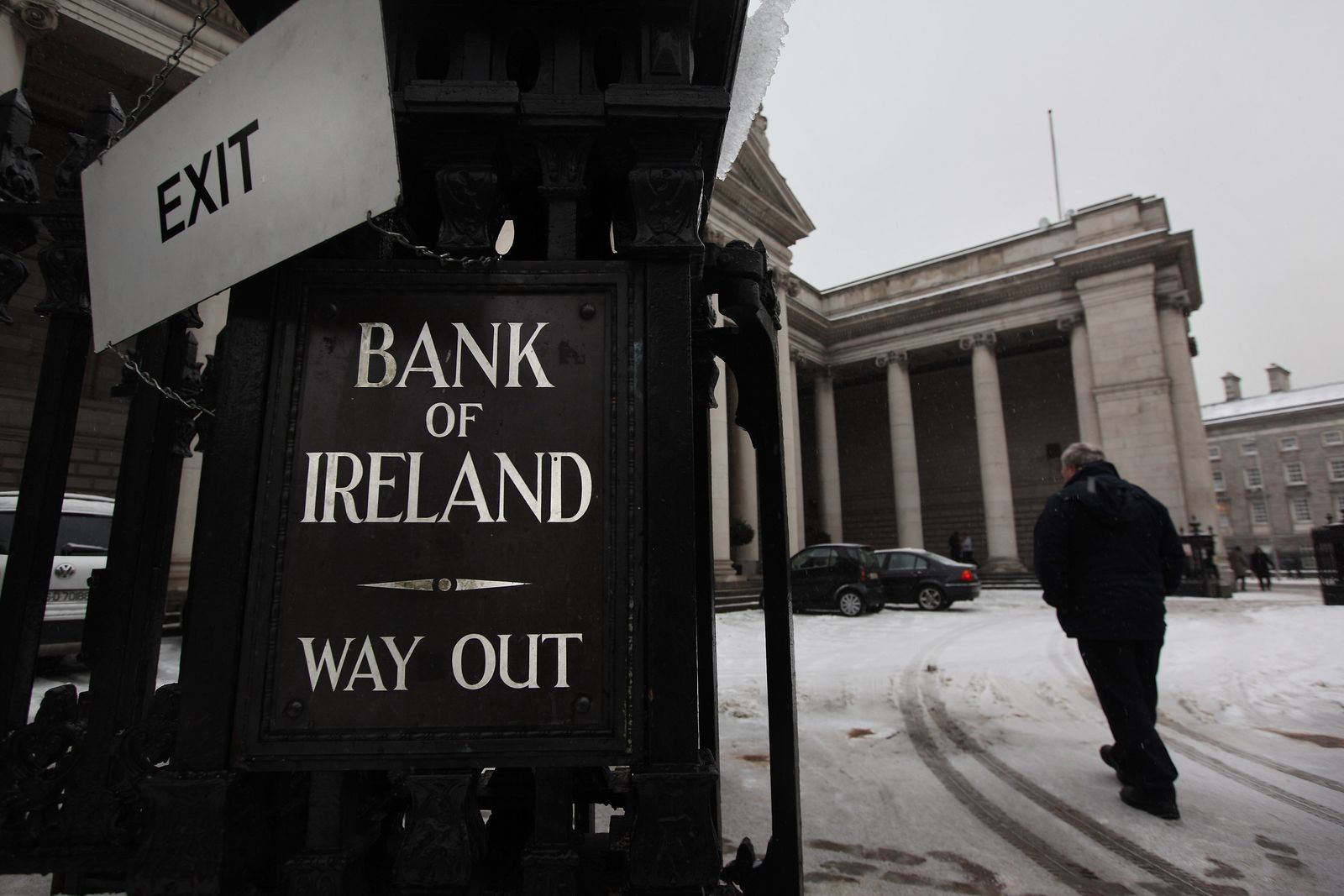 One of Ireland's struggling banks: The banking sector is Ireland's Achilles' heel.