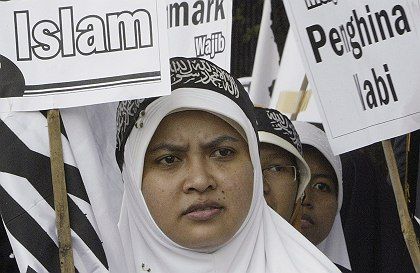 Protesters took to the streets again on Wednesday to protest the reprinting of Muhammad cartoons.

Draw a picture offensive to Muslim extremists, and you might find yourself without a roof. Ask Kurt Westergaard, one of the twelve Danish cartoonists whose autumn 2005 Muhammad caricatures lead to violent protests throughout the Muslim world. He was booted from his police-protected hotel room on Feb. 15 for being "too much of a security risk." And now the 73-year-old cartoonist and his wife are without a place to live.

Westergaard was forced to leave his actual residence in November after the Danish security and intelligence agency, PET, informed him of a "concrete" plan to murder him, according to the paper that originally published the cartoons, Jyllands-Posten. Westergaard and his wife have been living under police protection since.

PET had been gathering information about the plot for several months, leading to a Feb. 12 raid carried out in the western Danish city of Aarhus. Five suspects -- "people with a Muslim background," with both Danish and foreign citizenship -- were taken into custody. The Associated Press quoted PET as stating that the raids were intended "to prevent a terror-related murder[and to do so] at an early phase to stop the planning."

In response to last week's arrest, a number of Danish newspapers republished the original cartoons the following day. Among those reprinted, of course, was Westergaard's caricature: Muhammad with a lit bomb in his turban. "We are doing this to document what is at stake in this case," the Copenhagen paper Berlingske Tidende wrote, "and to unambiguously back and support the freedom of speech that we as a newspaper will always defend."

While protests in Pakistan saw Danish flags burned in response to the republishing of cartoons, reaction in the Danish Muslim community reveals how much attitudes have been tempered. "We are so unhappy about the cartoon being reprinted," said Imam Mostafa Chendid, head of the Islamic Faith Community. "[But] no blood was ever shed in Denmark because of this, and no blood will be shed. We are trying to calm people down, but let's see what happens. Let's open a dialogue." The Islamic Faith Community had led the protests in Copehagen in 2006.

Westergaard, however, has transformed fear for his life into anger at the entire situation. "Of course I fear for my life after the Danish Security and Intelligence Service informed me of the concrete plans of certain people to kill me," he said in a statement printed in Jyllands-Posten. "But I have turned my fear into anger and indignation."

The newspaper's editor, Flemming Rose, also the subject of death threats, told SPIEGEL ONLINE in a recent interview that, regardless of events, he does not fear for his life and that he will continue to speak out.