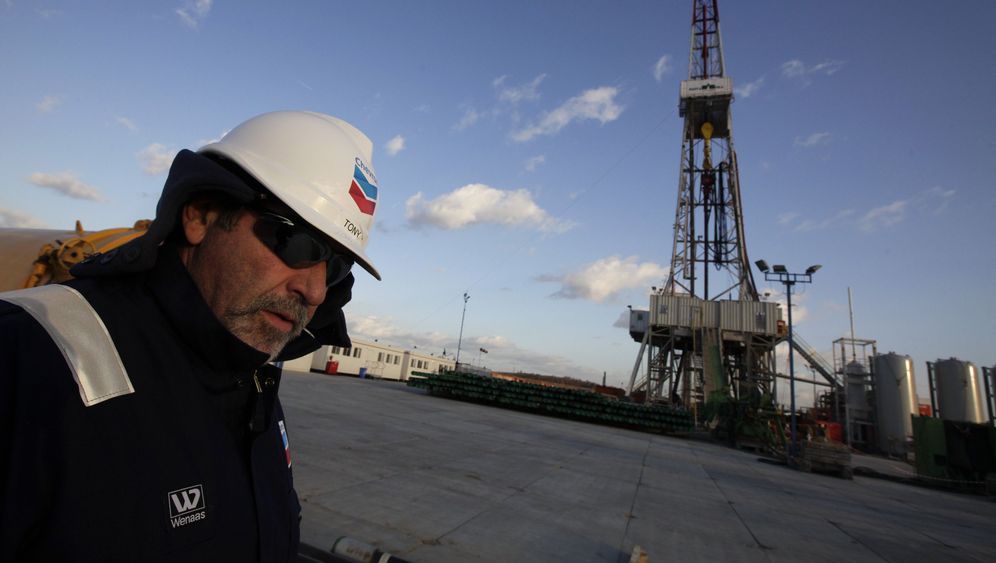 On the construction site in the northern Polish village of Trzebielino, bulldozers and graders drive around, and construction workers struggle to dig with their shovels in the icy wind. In the center of the plot is an apparatus, some 20 meters (66 feet) tall, which pumps water from the ground. Shale gas is thought to lie about four kilometers (2.5 miles) below the surface. Four different men approach this reporter. "No camera and no microphone, please," they say.

Otherwise, the two Americans and two Poles -- all employees of the gas company BNK Polska -- say they have nothing to hide. "We respect the environment; we respect the Polish laws," a man with sunglasses and a hood says in English. He says he is a "petroleum engineer," but declines to give his name.

BNK Polska is a subsidiary of the California-based energy company BNK Petroleum, Inc. The company holds six of the 110 permits granted thus far for test drilling in Poland, the country with the largest shale gas deposits in Europe.

The estimated 5.3 trillion cubic-meter deposit of recoverable natural gas is stored between layers of argillaceous rock that is often also called shale. Of that, at best one-fifth is considered to be accessible, but even that fact has led to a gold-rush-like situation in Poland over the past two years. International companies including Chevron, ExxonMobil and ConocoPhillips, as well as the national energy giant Polish Petroleum and Gas Mining (PGNiG) and some smaller local companies, are currently conducting test drilling in Poland in a "gas strip" stretching from the Gdansk region in the north, past Warsaw, to the southeastern part of the country.

A Possible Break from Gazprom

The Polish government is excited about shale gas because it represents a shot at energy independence. The country is currently one of the largest customers of Gazprom, the Russian energy giant, buying 10.25 billion cubic meters of natural gas from it last year alone. Gazprom's opaque pricing policies related to Poland are a constant source of tension between the countries. The fact that the Kremlin-cozy company has delivered 7 percent less gas to the Poland since last Thursday, while Europe suffers from a record cold snap, hasn't helped, either.

With the help of American expertise, Poland now has in its sights not only on the chance to become independent of Russian gas, but also on the possibility of becoming an exporter of the energy source. Indeed, when it comes to the future of gas, the normally opposed Civic Platform Party of Prime Minister Donald Tusk and the opposition Law and Justice Party under Jaroslaw Kaczynski have finally found one thing to agree on. Piotr Wozniak, who served as a gas expert when the Law and Justice Party led the government and is now serving as deputy environment minister, has been put in charge of the permit-allocation process.

Rising gas prices are expected to make up for the added expenses involved in this costly method of gas-extraction. In order to release the gas from the stone, highly pressurized water enriched with chemicals and quartz is injected into the borehole. This process, called "fracking," is one that energy companies would like to use in Germany. In conventional natural gas deposits, about 80 percent of the gas can be extracted; but with argillaceous rock, the figure is only 10 to 20 percent. In the process, the waste water of the fracking procedure is polluted with dangerous substances, including cancer-causing benzene.

Reports of environmental damage from the United States, where shale gas mining has been extensively practiced for more than a decade, are making their way to Poles directly affected by the test drilling. There have been isolated protests, and some residents of Miszewo, a village lying directly on the edge of the drilling field, are upset.

Szczepan and Teresa Jaciubek are sitting in the living room of their farmhouse. The news program TVN24 plays on the television, and the 61-year-old farmer says he reads three newspapers a day, one of which he has rolled up in his hand to use as he gesticulates. "Ten tons of chemical materials are being pumped into the earth!" he says. It is a fact, he says, claiming that BNK representatives told him that directly. As a result, the couple fears that highly flammable methane will soon be released from their water taps, as was shown in a memorable scene from "Gasland," a 2010 US documentary about natural gas drilling.

Szczepan says he sold two hectares (five acres) of the three-hectare plot now owned by BNK at a normal market price to a middleman representing an energy expert in Lodz, who then apparently turned around and sold the land at a higher price to the American gas company.

The Jaciubeks feel like they've been steamrolled. They first learned from community officials that there would be drilling near the village in mid-December, and the work began a few days later. American engineers reportedly gave chocolate Santa Clauses to the village's children and promised them free lessons on how to safely deal with traffic because trucks and heavy equipment have now been barreling through the once quiet development at full speed.

Teresa Jaciubek says she fears her grandchildren might get hurt. But not everyone in the village is opposed to the drilling. Zenon Drobinski, for example, one of the Jaciubeks' neighbors, supports it. "We need to move forward, not backward!" he yells across the field before adding, "Maybe I can soon operate my tractor on cheaper gas!"

Organized opposition to shale gas drilling has yet to form in Poland. In fact, independent environmentalist Marek Kryda disapprovingly notes that even members of Poland's Green Party refrain from criticizing the use of coal, from which roughly 90 percent of country's electricity is generated. What's more, although he lacks proof to back his claims, he says that many affected residents are letting themselves be silenced by bribes and intimidation.

So far, there have only been a few cases of proven official corruption related to the awarding of drilling permits. One involved someone working at the Warsaw-based Polish Geological Institute, which called off all collaboration with petroleum companies at the beginning of the year.

The strain at the institute is palpable. Just like the BNK engineers at the drilling site, spokesperson Miroslaw Rutkowski doesn't allow cameras or microphones during an interview. Shale gas expert Pawel Poprawa nervously plays with his hands while speaking. "One cannot yet tell if shale gas extraction in Poland is at all worth it," the geologist says, explaining that it all depends on international gas prices and production costs.

Since these costs are high with fracking, the state wants to provide incentives to the gas companies in the form of especially low tax rates. Indeed, it stopped being a matter of business management a long time ago. Instead, now it's about the dream of being independent from Russian energy. The gas is scheduled to start flowing in 2014, says Polish Prime Minister Donald Tusk, or one year before the country plans to adopt the euro.