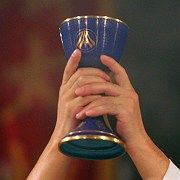 Bad Blood: Priests in Ireland are concerned that lowering the legal drinking level for drivers might leave them stranded after Mass.

The job description for a Catholic priest doesn't include a lot of perks -- perhaps one reason that their numbers are shrinking rapidly across the Western world. In Ireland, though, the gig might be further complicated by a new proposal to lower the legal blood alcohol limit for drivers. Priests there are speaking out against the proposal because it could render them legally drunk after performing Mass.

"Perhaps it could be enough for you to fail a drink-driving test," the Rev. Brian D'Arcy, a priest from Enniskillen, told the Irish Times. "I don't like to use the word wine, as it is Christ's blood in the Eucharist -- but it still has all the characteristics of wine when in the blood stream."

Ireland's Road Safety Authority is advocating a reduction in the legal driving limit from the current level 0.08 percent blood alcohol content to 0.05 percent. Government officials in Northern Ireland are pressing for a similar reduction. Priests say the new limit would put them over the legal limit after fulfilling their duties during the Mass, which include drinking all consecrated wine not distributed during communion.

The problem, they say, is exacerbated by the shrinking population of priests, who often have to drive long distances in their quest to administer the sacraments. "I would often have three Masses to say in one day and while I had not thought about the impact of driving with the wine, it is probably now a factor that needs to be seriously considered," the Rev. Stephen Farragher, a priest in Tuam, told the paper.

He added that non-alcoholic wine is not an option. The Catholic Church dictates that "mustum," or grape juice, must be approved on a case-by-case basis, and such status is rarely granted. Irish priests are saying that even if the lower limit is enacted, Catholic doctrine and the needs of their parishioners would trump the law.


"If a call comes in that somebody is nearing death, I have no choice but to drive to where that person is and give him or her the last rites," one priest told the Irish Independent.

Another protest against the proposed lower limits made headlines last week when it was suggested that even a hearty swig of mouthwash might put a driver over the legal limit. Most mouth washes contain a minute amount of alcohol, which, opponents to the lower limit argue, could be enough to send a hygiene-conscious gargler to the slammer. A spokesman for the Garda Siochana, Ireland's national police force, assured the Indendent that such a small amount of alcohol dissipates to undetectable levels within minutes. "There is no way that a mouthwash alone would result in a positive breath test," the spokesman said.