The guest from the Middle East doesn't stand out much in the lobby of his Berlin business hotel. He's in his late forties, has gray hair and wears a gray suit, a blue shirt and a gray-blue tie. A gray laptop bag hangs over his right shoulder. Only a handful of people in the German capital know that this apparently unassuming man is a top diplomatic weapon in efforts to halt Iran's nuclear program.

The visitor is on a secret mission that has earned him the nickname "Mr. Sanctions." As an expert on the penalties the international community is imposing on Iran, the globetrotter is in constant demand at the moment, especially with Europe's leaders. He claims he has visited almost two dozen capitals in less than a month. Only last week, he lobbied at Chancellor Angela Merkel's office, the Chancellery, and the Foreign Ministry for imposing stricter sanctions.

When he departed, his hosts in Berlin were left in no doubt about his message: The most serious option -- military intervention -- should not be considered until all the possible sanctions have been exhausted. An Israeli attack on Iranian nuclear plants, which Benjamin Netanyahu's government recently threatened again, is seen as a nightmare scenario by leaders from Berlin to Washington. But for the time being, Jerusalem is still going the diplomatic route, all the while seeking to win over its partners in Europe to the idea of tougher sanctions.

In contrast to his previous stay eight months ago, Mr. Sanctions got a warmer welcome when he visited last week. "We have found a common position," diplomatic sources say. The acceptance that tougher sanctions are necessary is not only the result of this flying visit. After protesters attacked the British Embassy in Tehran on Tuesday, the previously reticent German government simply didn't have a choice anymore.

Their passions stirred up by public agitation, furious demonstrators -- allegedly students -- had marched on the British Embassy. The mob hurled Molotov cocktails and bags of dye at the building, chanting "Death to England" before eventually storming it. At the same time, fanatics in the north of the capital occupied another diplomatic mission. A short-lived hostage-taking briefly brought back memories of the occupation of the US Embassy during the Iranian revolution of 1979. Government represenatives in Tehran apologized for the incident, blaming it on "public anger."

But was the attack simply a tit-for-tat move in response to London's decision to follow Washington in increasing sanctions on Iran? Was this "appalling and disgraceful behavior," as British Prime Minister David Cameron called it, intended to send a signal to other Western governments that their embassies would burn if they too took a stronger stance?

Observers in Tehran are convinced the incidents at the very least got a tacit nod from certain parts of the Iranian leadership. Such action would be unthinkable otherwise in a police state like Iran. But if anyone in the bitterly divided regime thought they would intimidate the West, then that person miscalculated.

London gave all Iranian diplomats in Britain 48 hours to leave the country. Norway closed its embassy in Tehran in solidarity, while German Foreign Minister Guido Westerwelle summoned the Iranian ambassador and recalled Germany's representative to Iran back to Berlin for consultation. France and the Netherlands ordered their ambassadors home too.

The Europeans also showed remarkable unity at a meeting of their foreign ministers in Brussels last Thursday. Tougher sanctions have been on the cards ever since the International Atomic Energy Authority presented its latest report in Vienna, in which it listed detailed evidence of a "possible military dimension" of Iran's nuclear program.

Voicing their "shock" at the attack on the British Embassy, the European ministers took remarkably firm action, banning an additional 180 companies and individuals from traveling to or trading with Europe.

More damaging for the leadership of President Mahmoud Ahmedinejad and Ayatollah Ali Khomeini, however, is the announcement of further sanctions intended "to hit the financial system and the energy sector hard." This would see the entire European Union following the route taken by Britain and the United States.

In concrete terms this would be an attack on two pillars of the regime: The Iranian central bank, through which the country processes most of its international trade, worth an estimated €150 billion ($200 billion) a year; and oil exports, which last year brought the country the equivalent of almost €50 billion in foreign currency and therefore accounts for nearly half of government revenues.

Nevertheless, the decision would also be painful for certain European nations. Italy and Spain, already shaken by the debt crisis, covered just over 13 percent of their oil needs from Iran during the first half of 2011. In this period alone, they purchased oil worth more than €5 billion from Tehran.

Greece would be hit especially hard by the sanctions. Athens has been buying its oil reserves from Iran on credit for a long time. According to one embargo expert, Tehran's willingness to deal with near-bankrupt nations like Greece is a sign of its growing frustration. "They're willing to accept a lot to stay in business," he said.

Of the 41 international oil companies that once did business with Iran, only 16 allegedly still do so today. And since the embargo is preventing plants from modernizing -- or at least slows this process down considerably -- output is falling by 5 percent a year. Meanwhile, less and less gasoline is being produced for domestic consumption because the country's oil refineries are outdated. As a result, Iran can't meet well in excess of 40 percent of its gasoline needs. Because of the sanctions, imports can now only cover about a quarter of this.

The outcome is clear: "The mullahs have been hit, but not yet hard enough to force them to make concessions on their nuclear program," said a high-ranking diplomat in Jerusalem. "We must now fire off every bullet in the barrel of our revolver."

Cutting business ties with the central bank would undoubtedly deal the Iranian economy a big blow. Although this wouldn't "dry up all sources of funding for the Iranian nuclear program," as German Foreign Minister Guido Westerwelle demanded in Brussels, it would hit Tehran's trade in a vulnerable spot -- even though it would also damage Iran's partners in the EU. After all, trade with the EU amounted to the not inconsequential sum of €25 billion last year.

The Europeans won't decide until early next year whether they will really go as far as they are currently threatening. That's when the foreign ministers are due to consider their sanctions options. In the meantime, they are seeking further expert advice. Mr. Sanctions is therefore looking forward to receiving plenty of visitors from Europe. 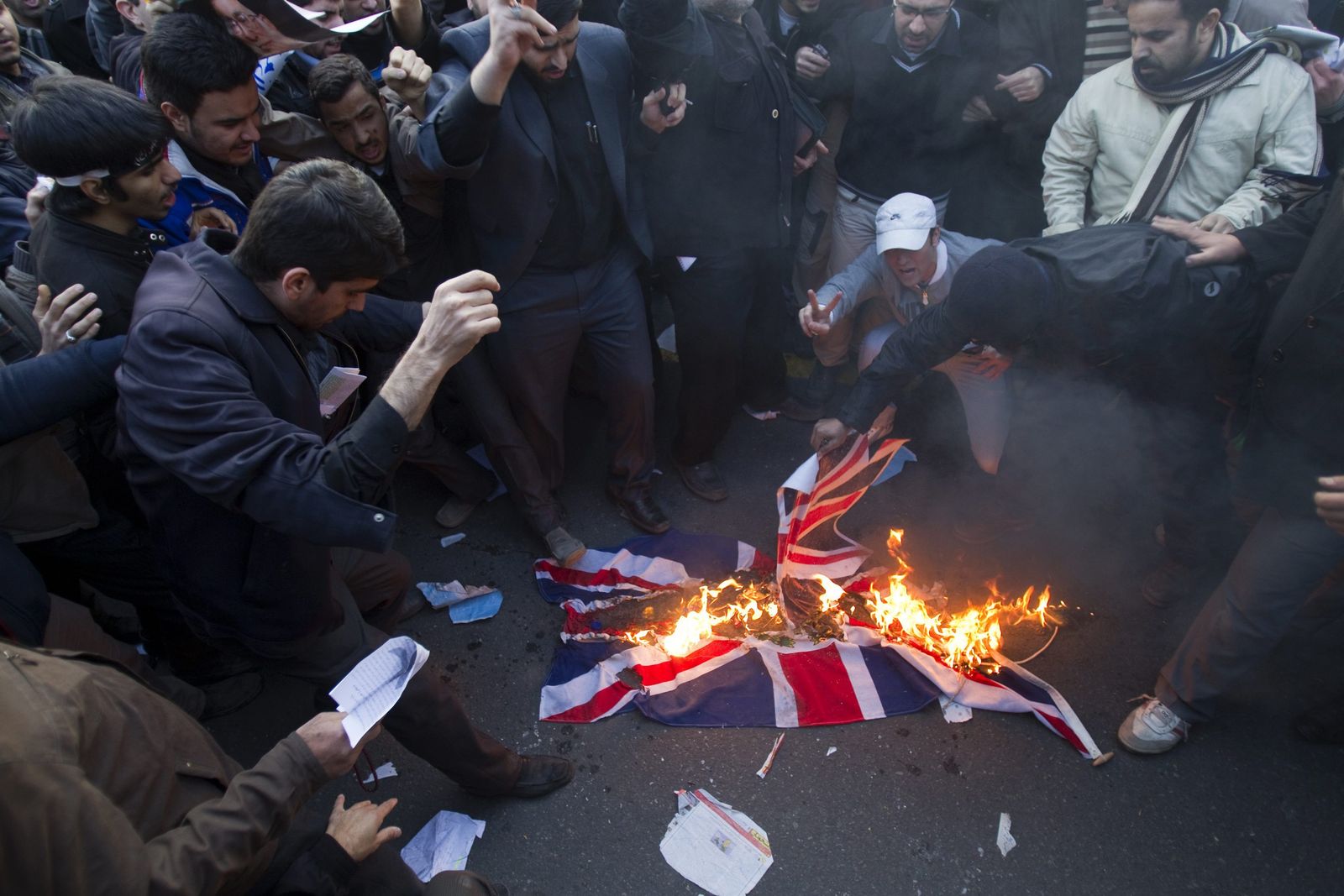 Protesters in front of the British Embassy in Tehran on Nov. 29