German Chancellor Angela Merkel doesn't have many fans in Greece. Many in the Mediterranean country feel that Germany was aggressively accusatory earlier this year when it came to Athens' severe national debt and budget deficit problems. Bitterness has only increased as tough austerity measures have taken hold.

Now, though, it would appear that Merkel's popularity has plummeted in several more European countries, Ireland being chief among them. Ever since European Union leaders agreed in late October to a Berlin proposal that foresees the possibility of bankruptcy proceedings for euro zone countries -- including potential losses for holders of sovereign bonds -- interest rates have skyrocketed on those bonds. On Wednesday, Irish bond yields rose for the 12th day in a row -- closing at 8.7 percent on Wednesday -- indicating that investors are increasingly losing faith in the country's ability to pay back debt.

"The main reason why spreads have remained under pressure isn't further divergence in budget fundamentals," Luca Jellinek, head of interest-rate strategy for Credit Agricole, told Bloomberg. "Rather, it stems from fresh evidence that inter-government solidarity within the European Monetary Union remains limited and possibly fragile."

While European officials have spent the week insisting that the EU would come to the support of Ireland should it become necessary, both Merkel and French Foreign Minister Christine Lagarde have increased pressure on Ireland in recent days. On Wednesday, Lagarde made the clearest statement yet that France supports Germany's position on debt restructuring for crisis-ridden euro zone countries.

"All stakeholders must participate in the gains and losses of any particular situation," Lagarde told Bloomberg television.

Merkel, for her part, has refused to soften her stance. In Seoul on Thursday for the G-20 summit, she said "we also need creditors to be involved in the costs of restructuring. ... We can't constantly explain to our voters that taxpayers have to be on the hook for certain risks, rather than those who make a lot of money taking those risks."

The EU plans to present an initial proposal for how such a restructuring mechanism might work by December. The idea is to draft rules that will take effect once the €750 billion euro ($1.02 trillion) rescue package, set up earlier this year, expires in 2013.

European Commission President Jose Manuel Barroso, in reference to that bailout fund, insisted on Thursday that Brussels was prepared to come to Ireland's aid. "What is important to know is that we have all the essential instruments in place in the European Union and euro zone to act if necessary, but I am not going to make any speculation."

The fund, worth a total of €750 billion (close to $1 trillion), includes €440 billion in guarantees coming from members of the euro zone and a further €60 billion coming from the European Union. The International Monetary Fund is contributing the remaining €250 billion to the fund. And the IMF's involvement in the fund and the specter that it might be involved in setting the terms of any bailout contributed to driving up the country's borrowing costs on Wednesday.

Ireland has continued to insist that it will not have to tap into the EU fund, with Finance Minister Brian Lenihan saying this week that Ireland -- which has temporarily ceased issuing sovereign bonds due to the high interest rates -- has enough money to pay its debts through next April at least.

Still, investors are eagerly awaiting the details of Ireland's austerity program, set to be released this month. Ireland plans to cut €6 billion from its 2011 budget deficit and a further €9 billion in subsequent years. The country hopes to be able to reduce its budget deficit, currently at a whopping 32 percent of gross domestic product -- a figure that ballooned because Ireland had to include the one-off costs of bailing out its banks this year -- to below the euro-zone limit of 3 percent by 2014.

Ireland isn't the only euro-zone country seeing a rise in its sovereign bond yields this month. Portugal, Spain and Greece have all suffered from investor uncertainty about what a future EU debt restructuring mechanism might look like. Concerns are growing that tough austerity measures in Ireland, Greece and Portugal, in particular, might hamper future growth, further limiting those countries' ability to eventually pay down their debt loads.

"The focus is now shifting from fiscal consolidation towards economic growth," Carsten Brzeski, chief economist for ING in Brussels, confirmed to the Associated Press this week.

The renewed concern over European sovereign debt has once again spread to the euro. Despite the US Federal Reserve having announced plans to dump $600 billion into the US economy in the coming months -- a move which normally would have resulted in the dollar losing value against the euro -- the European common currency has actually dropped against the dollar this week. While the euro briefly climbed above $1.40 on the Fed's announcement last week, it is now at $1.37 and falling.

European Economic and Monetary Affairs Commissioner Olli Rehn has been doing what he can this week to throw investors off Ireland's scent. In Dublin on Tuesday, Rehn said: "You are a smart and stubborn people. Time and again you have proved you can overcome adversity. And this time, you do not face the challenges alone. Europe stands by you."

Still, even if the European debate about debt restructuring mechanisms has triggered this most recent round of sovereign debt panic, the onus is on Ireland to convince investors that it has a workable plan. Parliament is currently set to vote on Prime Minister Brian Cowen's budget on Dec. 7. But even though there is widespread fear that the crisis will be exacerbated if the budget isn't passed, the country's two major opposition parties have indicated they will vote against the budget. Cowen is deeply unpopular in Ireland, and a failure of the budget would almost certainly lead to new elections.

Last year, the Irish government already cut public spending by €4 billion, reductions which primarily hit public sector workers and social welfare recipients, although they were felt in all sectors of society. Many wonder where further cuts could come from. This week, labor unions have said they plan to hold a day of protest later this month.

Still, even if Cowen manages to push through his budget, there is no guarantee that Ireland's cost of borrowing will drop to affordable levels. Indeed, even EU money would include 6-8 percent interest.

"The interest rate would be high," John McHale, an economics professor at the National University of Ireland at Galway, told the AP in reference to EU funds. "And there would be huge reputational damage done to Ireland. So we might as well solve this problem ourselves." 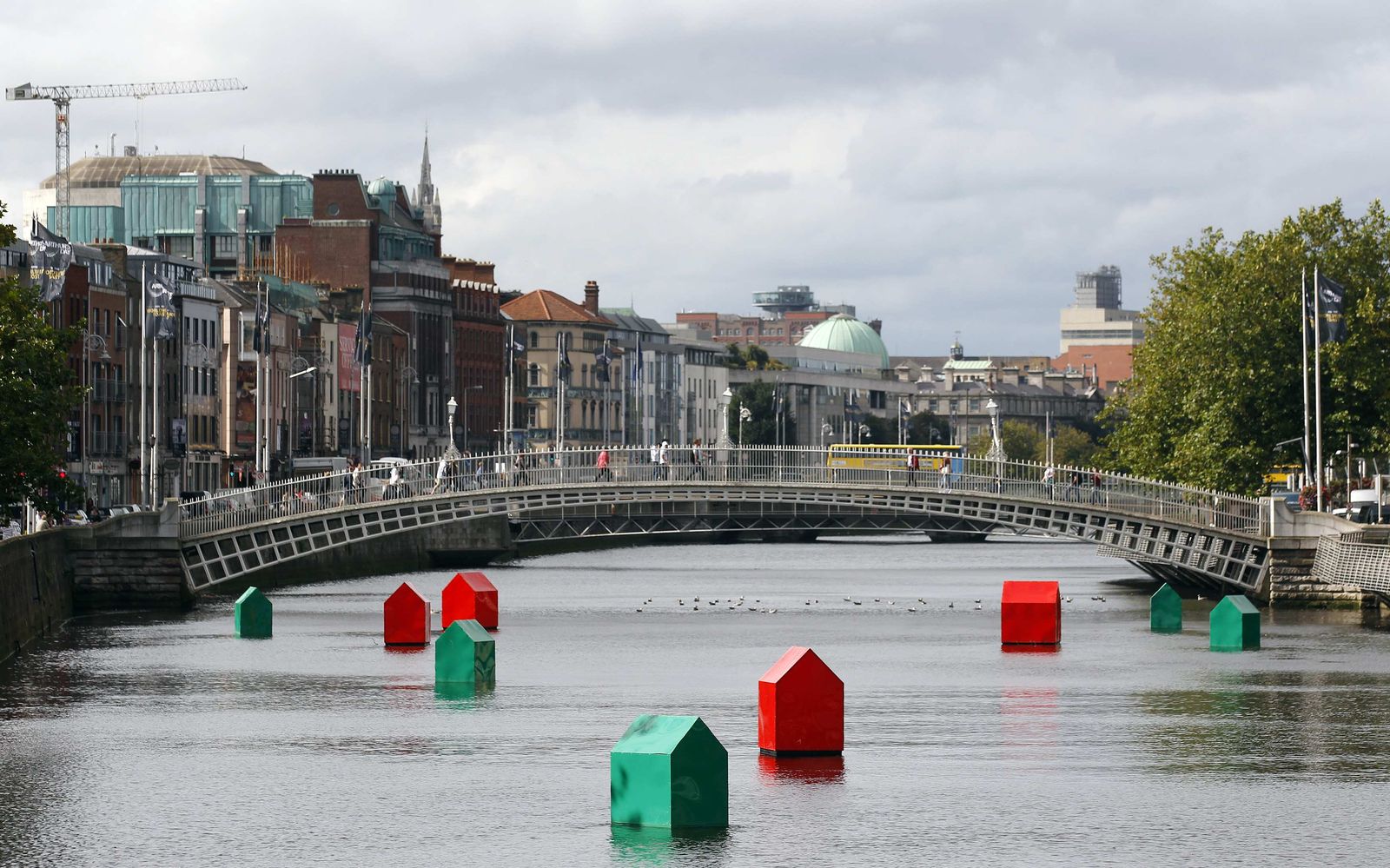 Monopoly houses and hotels in the Liffey River in the heart of Dublin: Investors are once again concerned about Irish debt.