The Big Bazar in Winterswijk is, as usual, full of "Big Deals!" despite the coronavirus. Plastic footballs, clothespins for hanging laundry, flower pots and various other things are for sale at the store in the Dutch border town. There’s a stand with jackets in front of the clothing shop next door and the drug store Kruidvat across the street has a special offer on creme. People seem relaxed as they stroll through the pedestrian zone and there's not a face mask to be seen. If you visited Winterswijk last Saturday, you could have been forgiven for thinking that the pandemic doesn’t even exist here. But just 10 kilometers away, in the town of Vreden on the German side of the border, almost all the stores have been closed for several days.

Still, the Saturday here in Winterswijk isn't completely normal. After all, there’s nothing going on in the market square. The city’s municipal administration cancelled the popular Winterswijk weekly market at short notice for the first time in at least 60 years -- market records only go back to the 1950s. Only a few cars are parked where thousands of people would normally be crowding around cheese, flower, candy and fried fish stands. Some of the shops here have closed on their own.

The Hesselink family, a couple with two of their grown up children, are standing in the pedestrian zone eating chicken nuggets. The father says he’s annoyed that they drove for an hour to Winterswijk just to go to the market, only to find it closed. "But now we’re making the best of it.” The four went for a stroll and they have a number of shopping bags to prove it. When asked if they’re afraid of contracting the virus, the mother says: "No. Sooner or later, everybody’s going to get it anyway.”

It's an attitude that is widespread in the Netherlands. The country has thus far been much less strict in its handling of the coronavirus pandemic than many other countries. There are no curfews in place like the ones in France and Spain and no contact bans as comprehensive as those in Germany. Schools and restaurants have had to close, but most shops are still permitted to open.

The Controversial Idea of Herd Immunity

A week ago Monday, Prime Minister Mark Rutte made headlines around Europe when the economically liberal politician said: "The reality is that in the near future, a large part of the Dutch population will be infected with the virus.” He then said: "We can slow down the spread of the virus while at the same time building herd immunity in a controlled way.”

Not long later, Rutte had to clarify his remarks, particularly because of his use of the controversial term "herd immunity.” The controversy stems from the fact that it envisions a more resistant segment of the population to be infected as extensively as possible as a way of building a kind of "protective wall” around the old and weak, who will have to be strictly isolated until such herd immunity builds up. The strategy has a welcome spin-off effect: It doesn’t require restricting public life or putting the economy in a deep freeze. But there are significant doubts as to whether it can really work - especially with a virus like SARS-CoV-2, for which so little research exists. 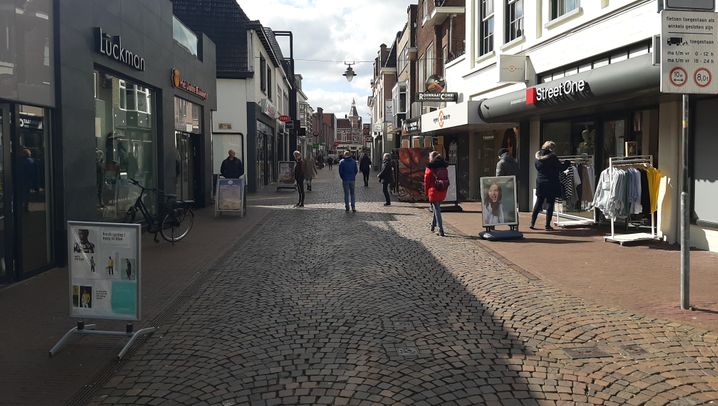 Public Life Goes on in Holland

Opposition politicians in the Netherlands have been highly critical of the strategy. "Many Dutch people feel like they are being made part of a big experiment,” Lodwijk Asscher, the head of the country’s center-left Social Democratic Party has said. Right-wing radical politician Geert Wilders has said: "Rutte is playing Russian roulette with our people. Many people will get sick as a result. People will die.” Scientists believe that 60 to 70 percent of the population would have to come into contact with the virus to achieve herd immunity, the equivalent of more than 10 million Dutch people. Even with a low mortality among the young and the fittest, this would mean thousands of deaths. And the health system would soon be at its limits.

An Angry Letter to the Chancellor

Rutte had to clarify in a parliamentary debate that herd immunity was merely a foreseeable consequence and not his government’s actual aim. The speech also caused an uproar in neighboring Germany, with eight regional councils near the Dutch border joining the mayor of the city of Münster in issuing a warning to Chancellor Angela Merkel and North Rhine-Westphalia Governor Armin Laschet in an angry letter that the open border could be a "gateway" for further infections if the rules in Germany and the Netherlands were different. They called on the German government to close the borders as a measure of last resort.

The local council in the Borken district likewise advised its residents not to visit areas in the Dutch border region. But there has also been concern on the Dutch side of the border. That’s what prompted Winterswijk Mayor Joris Bengevoord to cancel the planned Saturday market. "It was a painful decision,” Bengevoord told DER SPIEGEL. "But the market has great appeal for Germans, and we have seen that infections have increased. We couldn’t take the risk of having many people from different regions come to Winterswijk right now.” At the time of the interview, there hadn’t been any cases of coronavirus infection, but that has since changed.

Rutte’s most important adviser in the corona crisis -- Jaap van Dissel, Director of the Center for Infection Control at the Dutch National Institute for Public Health and Environment -- holds views on the disease similar to his prime minister. Van Dissel explains that the virus must not be allowed to spread freely, otherwise the health system would be overwhelmed. And that herd immunity is not the goal. But he says it could become a weapon in the fight against the epidemic.

After all, he says, the virus is already here. And, he adds, the majority of people who get it will likely become immune to the coronavirus once they have recovered from the disease it causes. "Together, this group forms a shield around our vulnerable citizens. And drastic measures can then perhaps be rolled back somewhat in the future.” Because if the curve of infections doesn’t flatten out as much as in other countries, it might be easier in the future to loosen the social distance and boost the economy again without the infection rates immediately rising rapidly again.

Even Britain, where the government initially considered herd immunity as a strategy, is now relying on curfews. Experts attribute the fact that stricter distancing measures of the kinds being seen in other European countries aren’t being adopted in the Netherlands, despite 200 corona-related deaths already, in part to the country’s political culture. Instead of putting curfews and bans in place, Dutch politicians - led by economic liberals like Rutte – traditionally rely on the reason and personal responsibility of the country’s citizens, says Pim van den Dool, a public health expert for the respected daily newspaper NRC Handelsblad. But such expectations seemed rather misguided last weekend when people crowded the beaches and DIY stores, while some weekly markets remained open.

Rutte’s government has since been tightening the reins. On Monday evening, the government expanded its restrictions on public gatherings. Among other steps, it now gives municipalities the possibility to prohibit the formation of groups of more than three persons from different households in places like playgrounds, beaches or parks and to impose fines if those rules are violated. Hair salons and cosmetics and nails studios have also been forced to close for the next two weeks. But most retail operations are allowed to remain open as long as they can ensure that customers are keeping enough distance from each other. Children from different households may also continue to play with each other. And NRC Handelsblad has reported that weekly farmer’s markets are also exempted from the bans on gatherings. Rutte has announced that if these measures don’t work that the government will extend the lockdown to other aspects of public life.

And it may ultimately have no choice. On Thursday, the number of cases topped 7,000 for the country. Fully 1,019 of them were new ones. 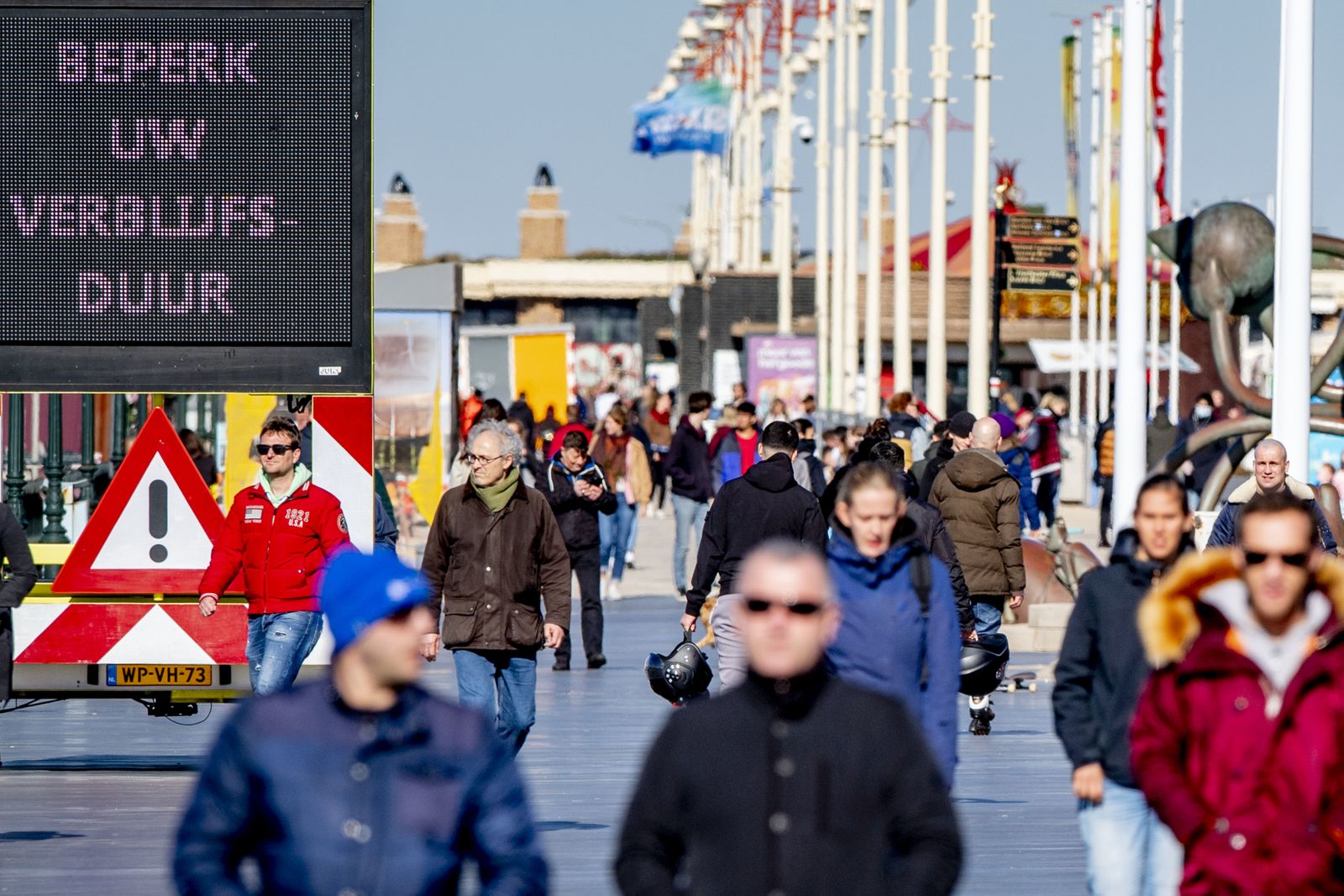 The Scheveningen beachfront prominade in The Hague on Sunday 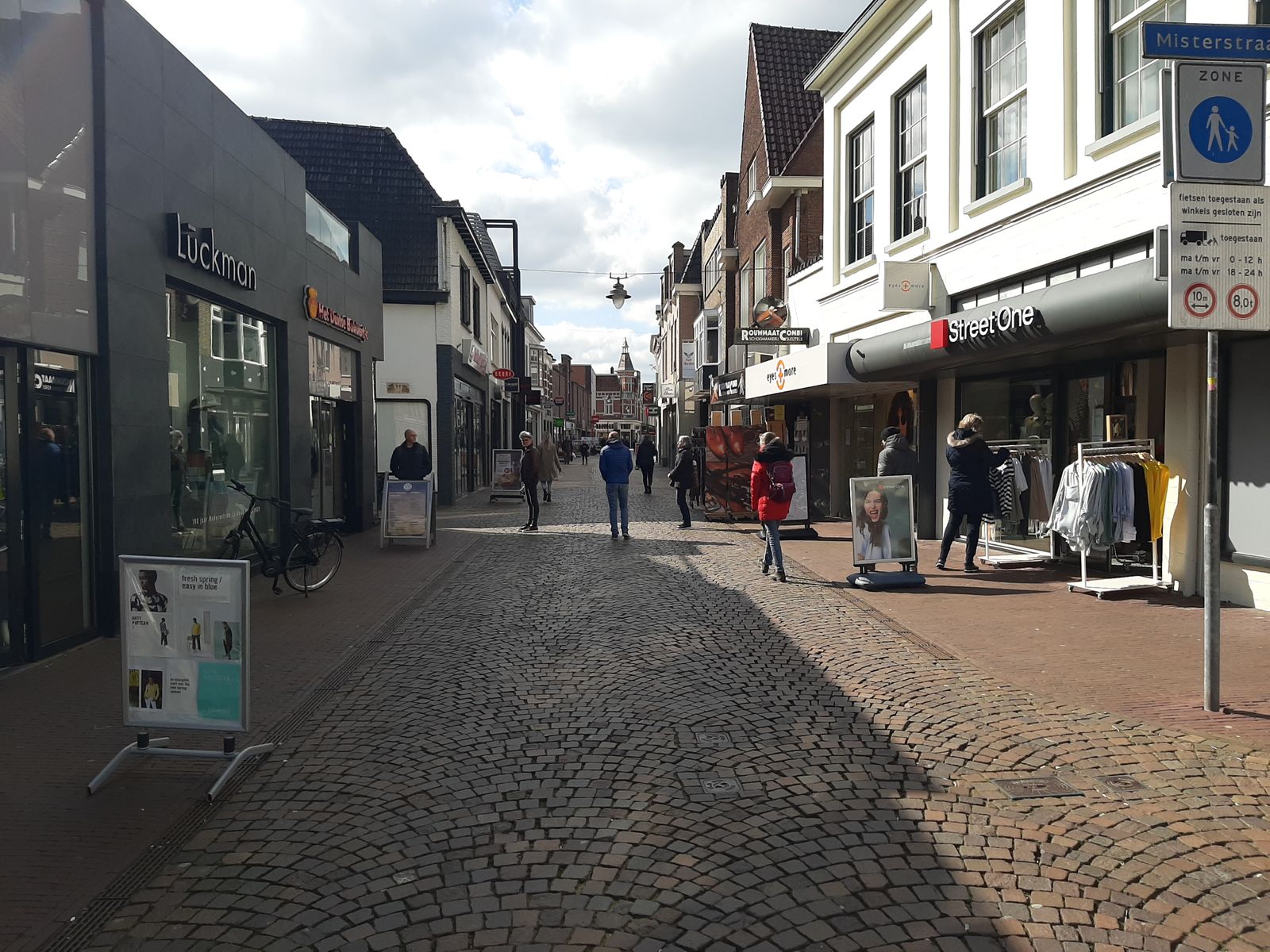 Winterswijk's city center last Saturday: Shops are still allowed to open, but restaurants are closed. In the Netherlands, the far-reaching bans on public gatherings and lock downs seen in other parts of Europe have not been put in place. 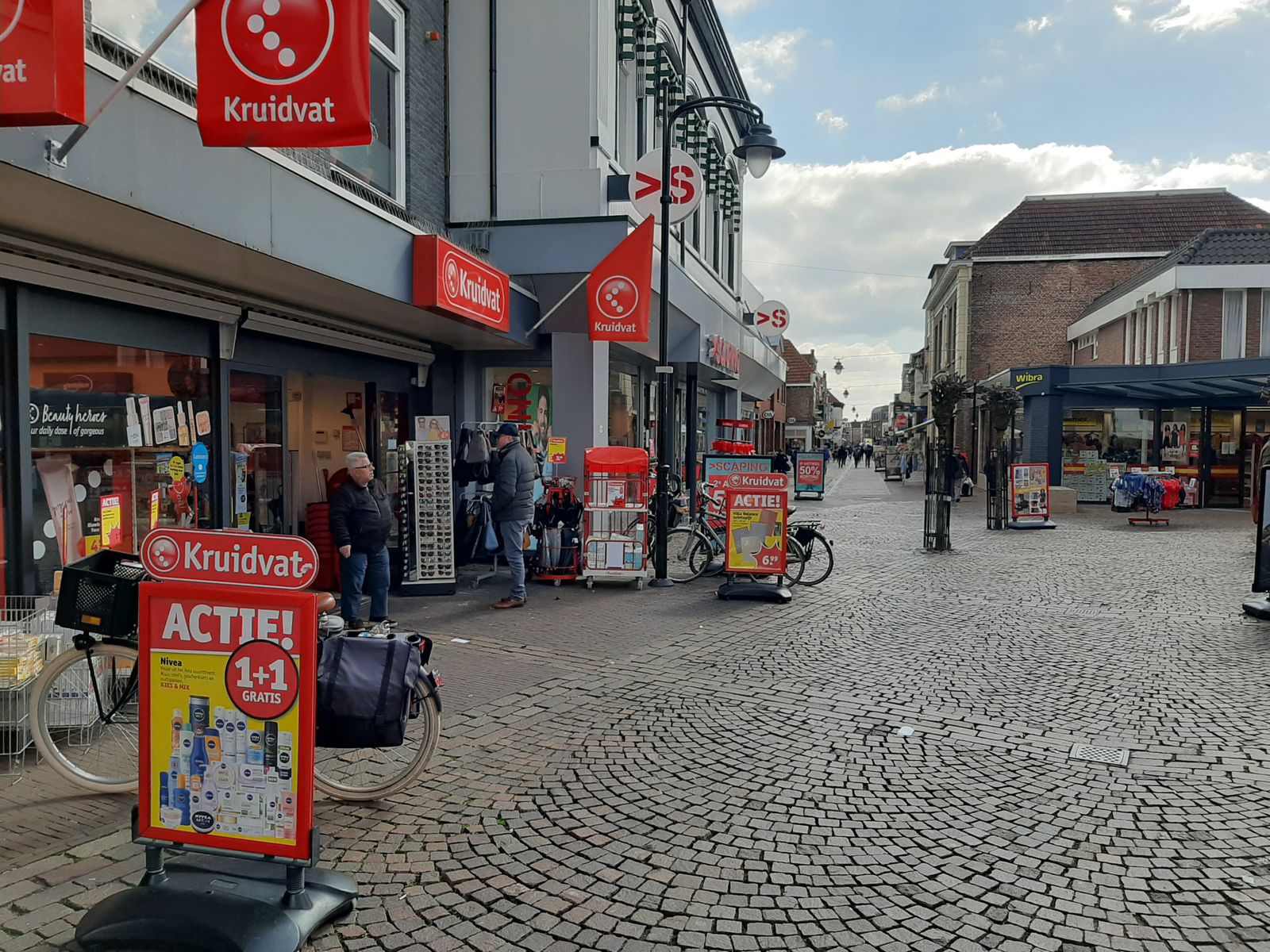 But Winterswijk did cancel its weekly farmer's market last weekend in order to prevent attracting people from out of town and to protect local residents. 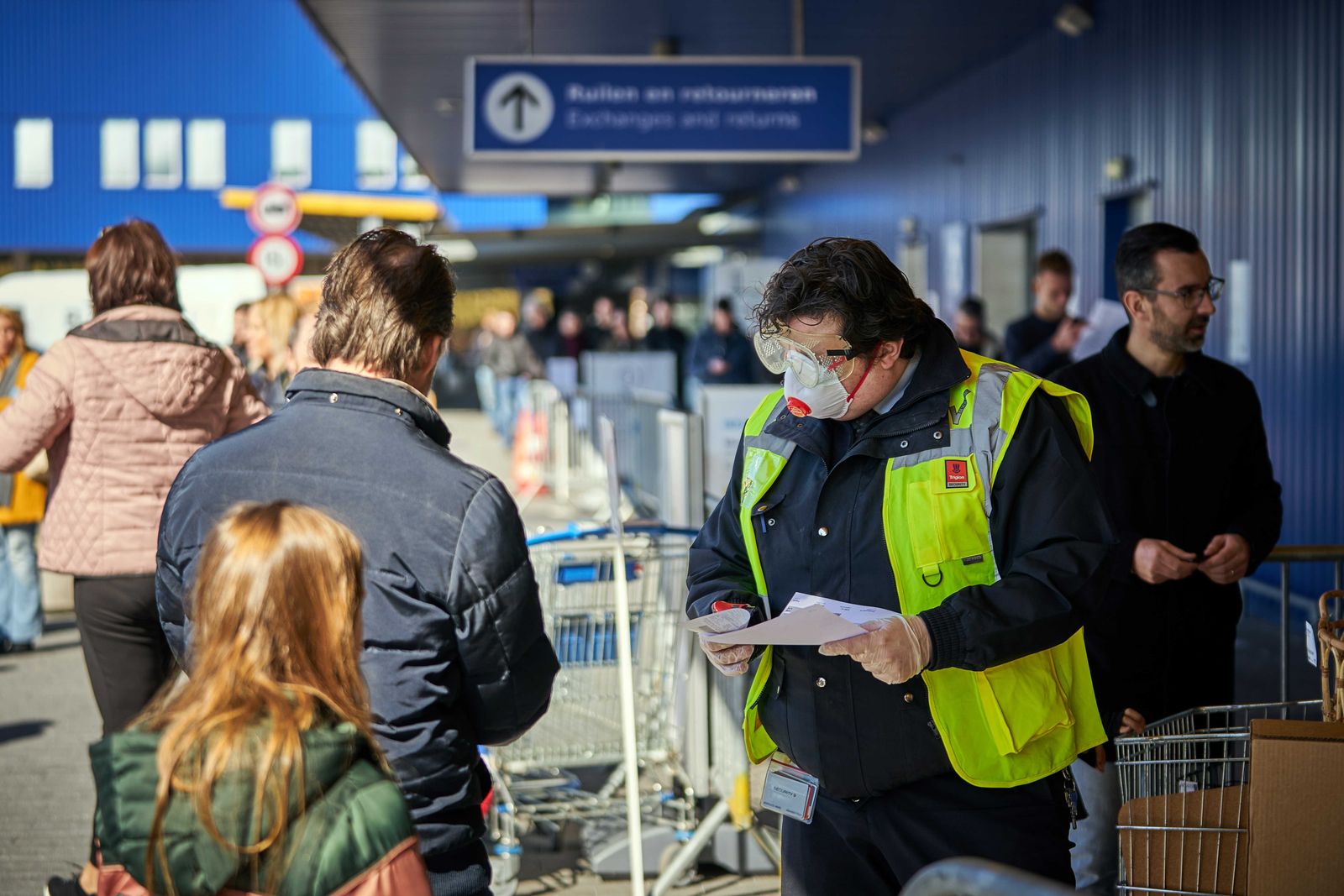 Waiting in line at IKEA: The Swedish furniture chain has closed its doors to shoppers in the Netherlands, but they can still pick up items they have ordered. 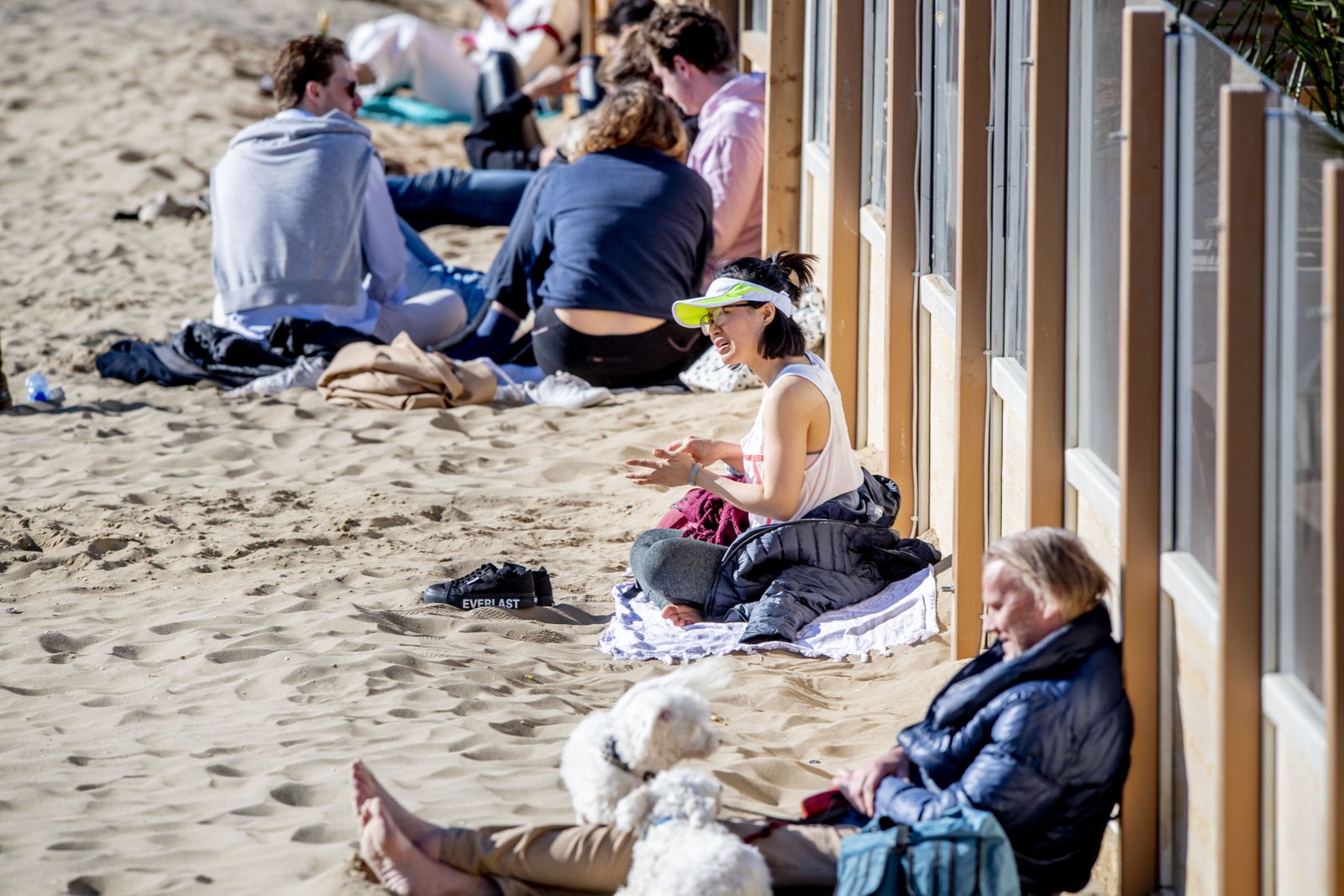 The government is also relying on people's common sense. But last weekend, public places like beaches in the country were crowded.

A lot of people could also be seen walking around the beach areas in Scheveningen in The Hague. The government has said it will consider more restrictive measures if people don't take the spread of the disease more seriously.