Two utterly contradictory images of the Netherlands circulate in the international press. One is the idea of a wild, unruly place where policemen smoke marijuana, gay men dance in the streets, and euthanasia can be arranged in an instant, a multiculti society that is so tolerant that even violent Islamic extremists are subsidized by the state. This caricature is especially popular in the United States.

But after the sudden emergence of populist demagogues, such as Pim Fortuyn and Geert Wilders, who rant and rave about the "Islamization" of Europe, a very different image has dominated the press: a country of reactionaries and racists, leading the rest of Europe in a march towards a new dawn of fascism.

Both images are wildly exaggerated, of course. And both seem to contradict Heinrich Heine's famous notion that in placid, sleepy, bourgeois Holland everything happens fifty years later than everywhere else. They also contradict the image of a calm, phlegmatic people, who can never get excited about anything. In fact, on the whole, people are relatively calm in the Netherlands. But there is indeed something a little frenzied about the new populism, exemplified by Geert Wilders, just as there was something overexcited about the social changes in the 1960s: sex, drugs and rock 'n' roll as a reaction to centuries of dull Calvinism. Long periods of calm, then, occasionally interrupted by bouts of hysteria: That might sum up much of Dutch social history.

The Radical Reaction to Faith

The populism of Fortuyn and Wilders actually reflects both images of Holland, reactionary on the one hand, and oddly modern on the other. Wilders hates being compared to such leaders of the far right as France's Jean-Marie Le Pen. And Fortuyn was openly, flamboyantly homosexual, something no other European right-wing demagogue would dream of emulating, not even the late Jörg Haider, whatever his habits might have been in private.

The far right in France, Austria, Belgium, Italy or Germany is associated with a tradition of fascism or Nazism. There is a direct line between the Action Francaise and Le Pen, or Mussolini and various far right parties in Italy. Holland had a National Socialist movement in the 1930s, to be sure, but the anti-Islamic demagogues of today have little in common with the prewar blackshirts. Fortuyn was once a socialist, who took up an anti-Muslim agenda because he saw Islam as a threat to gay rights and other cherished fruits of the social revolution in the 1960s. As he once famously put it: "I don't see why we should fight for gay rights and female emancipation all over again."

He is not the only person to talk like this. Quite a few former leftists have joined the hysterical chorus about an impending "Eurabia." In Holland, many leftists who came of age in the 1960s grew up in conservative, often religious families. Their rebellion was often as zealous as the institutions they rebelled against. The idea that religion is once again a serious factor in Dutch society, this time in the shape of Islam, fills them with rage.

In other respects, Fortuyn was closer to more traditional populist demagogues. He attacked the "elites," encouraged a cult of the strong leader (himself), and promised a way back to a more disciplined, mono-ethnic, mono-cultural society -- as if such a society ever really existed.

Defending the 'Gay Capital of the World'

Geert Wilders is not a flamboyant homosexual, but he is just as eccentric as Fortuyn. Perhaps as a way to disguise the dark hair inherited from his partly Indonesian ancestors, his hair is permanently dyed peroxide-blond. He, too, professes to be a champion of liberalism, and of free speech, for himself, at any rate. The Koran, which he compares to Mein Kampf, should be banned in his view, or at least heavily censored. He also advocates deportation of Muslim immigrants, and a special tax on headscarfs. Without such radical measures, he believes, "Judeo-Christian civilization" is doomed.

One thing that distinguishes Wilders from some of his populist colleagues in other parts of Europe, is a somewhat sinister form of philosemitism, which is driven by his loathing of Islam. A frequent visitor to Israel, Wilders approves of the Israeli hard line on the Arab population. He also finds support among right-wing Jewish organizations in the US, where he finds sympathetic audiences, often in synagogues, for his diatribes against Islam. One wonders what his audience at an "anti-Jihad conference" in Jerusalem made of his remark that Muslims were threatening Amsterdam's status as the "gay capital of the world." But this observation says something about the peculiar nature of modern Dutch populism.

Wilders, and before him Pim Fortuyn, is exploiting anxieties that go beyond the fear of Islam. A combination of economic globalization, murky EU politics, financial crises and uncontrolled immigration has eroded many people's trust in traditional politics and undermined their sense of belonging. More and more voters, in Europe as well as the US, feel unrepresented by the traditional parties. Old neighborhoods have been changed by immigration, and the sense of national identity has been shaken.

The social democratic elites are blamed for these anxieties. They are blamed for having allowed so many immigrants to settle in Europe, after welcoming them as guest workers or asylum-seekers. They are also blamed for having discredited national pride by promoting a pan-European identity and multiculturalism. These accusations are not entirely unjust. It is true, in Germany for obvious reasons, but in Holland too, that the expression of national sentiments almost became a taboo after World War II. Such feelings were confined to the football stadiums, which functioned as places of last resort to let off patriotic steam, especially when Holland was playing Germany. The EU, alas, is neither democratic, nor can it replace the nation as a focus of popular sentiment.

This would not have mattered so much in itself. But coupled with economic anxiety, as well as fear of violent terrorist attacks, it has become a serious problem. In times of high anxiety, the easiest thing is to turn those anxieties into aggression against unpopular minorities. The fact that a violent revolutionary movement has emerged from the Islamic world, and that some people are prepared to commit atrocities in the name of their faith, has made this problem worse. But the real target of popular discontent, certainly in Holland, is not the Muslims themselves, but the liberal elite that allowed them to settle there. And so Dutch populism contains an odd paradox. Even as the demagogues talk about resisting intolerant Muslims in the name of traditional Dutch liberty, the tolerance promoted for decades by the liberal establishment is denounced as well, as typical elitist propaganda.

Not long ago, if you asked a Dutch person what the Dutch identity was, he would probably have included tolerance, openness to other cultures, and hospitality to foreigners. Whether this kind of self-congratulation was truly justified is questionable. But the attitude among Wilders' supporters now is that tolerance has gone too far, that the multicultural society is a terrible failure, and that "foreigners" (even if they are citizens born in the Netherlands) must be forced to assimilate or be kicked out. When Queen Beatrix pleaded for tolerance in her Christmas speech a few years ago, Wilders expressed his disgust for what he called the Queen's "multi-culti nonsense."

Tea With Muslims, as a Jew

The question, then, in Holland as well as other democracies, is how to restore confidence in liberal politics. Without wishing to revive the more dogmatic forms of multiculturalism, which sees assimilation, or even integration into mainstream society, as a kind of cultural betrayal, people in Holland, as well as other parts of Europe, will have to get used to treating immigrants from non-Western countries as equal citizens. This also goes for European Muslims. Only then can the violent revolutionary element be effectively isolated.

In fact, the reality in Holland is not as bad as the harsh rhetoric of populists might suggest. Geert Wilders is popular, but not nearly as popular as the former social democratic mayor of Amsterdam, Job Cohen. Ever since he tried to calm things down in Amsterdam after the murder of Theo van Gogh by a young Muslim terrorist, he has been attacked by his critics as a cowardly appeaser of Islamic extremism. He personifies, in the eyes of his enemies, the liberal elitism and soft tolerance that people blame for everything, from street crime in immigrant neighbourhoods to violent Islamist extremism.

It is true that Cohen did his best to talk to Muslim citizens, to drink tea in mosques, and to take the problems of immigrants seriously. He did this, as he himself has often pointed out, because he knows what it is like to be excluded. Cohen is from a secular Jewish family. His parents survived the Nazis' attempt to exterminate them.

The next general election will be held Wednesday. Since the Netherlands has a complicated system of proportional representation, it is by no means certain that Cohen's Social Democrats (PvdA) will manage to form a majority government, despite his high personal standing. But his chances of becoming prime minister is much better than the chances of Wilders taking power with his one-man Party for Freedom (PVV). Even if Cohen succeeds, the problems of terrorism, street crime, or economic anxiety, will not disappear. But Holland will have a better chance to restore a degree of sanity, and be a country that is neither wild, nor bigoted, but the calm bourgeois place it should be. 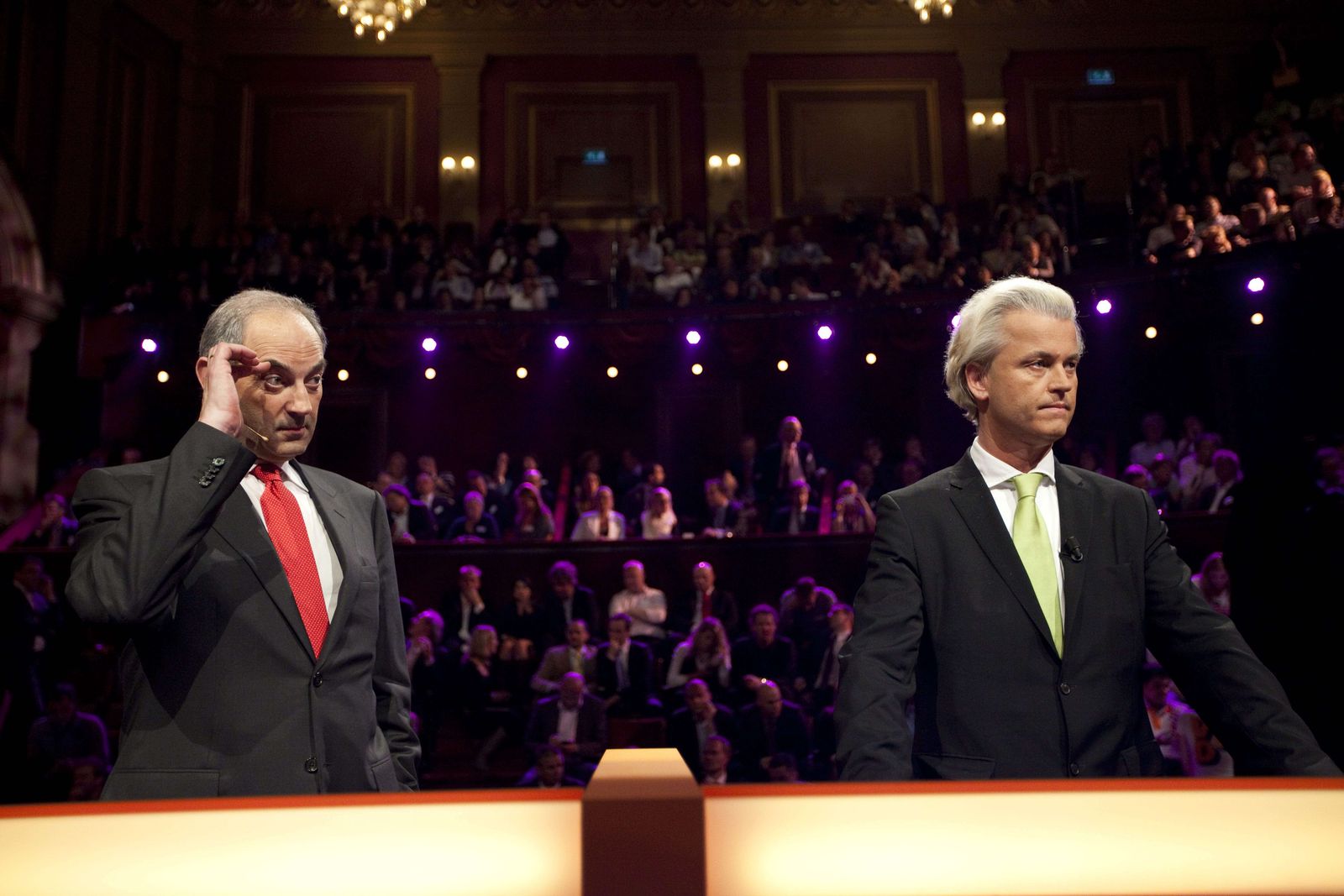 Job Cohen, left, is more popular in the Netherlands than the right-wing populist Geert Wilders, though Wilders' party is set for a bounce on June 9.