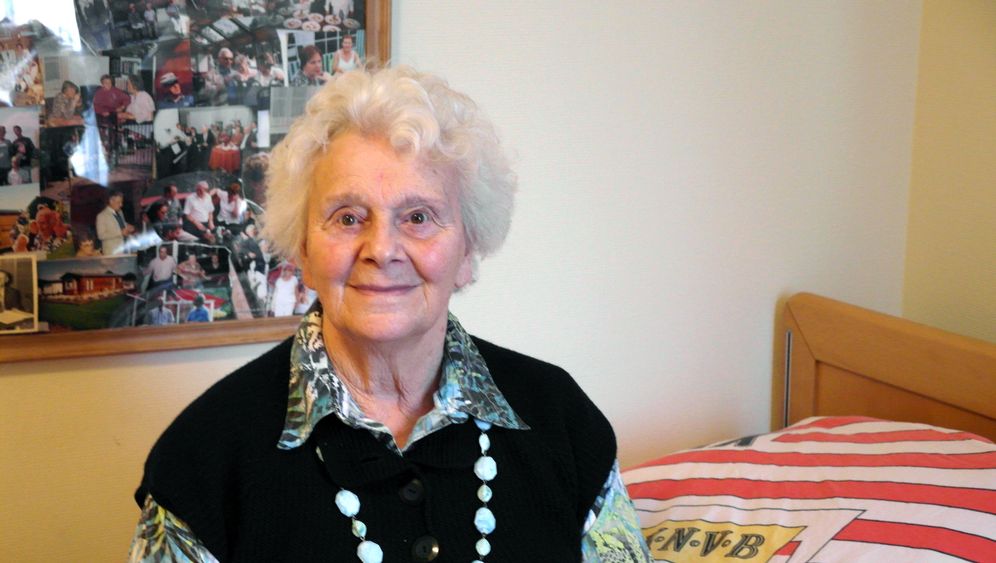 The moment that the world turns out to be illusory happens unexpectedly. "If you would please follow me," says Jo Verhoeff, before taking a brisk step forward. Verhoeff is a proud woman, and her living room is her realm. "It's nice that you are here," she says. Good manners are important to her. She leads the way through the hallway, where photographs of the last New Years' Eve party hang, then past the front door that is never closed and into the yard where a laughing snowman still stands, even though winter has already passed. The spring sun shines on his plastic belly.

Seasons, customs, daily routines, stories -- they all blend together in the tiny village of Hogewey, located in the Dutch community of Weesp. It's a place for people with dementia who no longer have either proper judgement or a feeling for their own security, but long for freedom. If one thing defines this place, it's serenity. Residents venture outside without coats in the winter and wear two in the summer. They feel the rain on their skin and leave their umbrellas at home. They drink coffee before bed and eat chocolate for breakfast. They cross the street in a rage and sing to themselves down hallways.

"It's good to speak German again," Verhoeff says after a long greeting. "It's nice to have you visit; I'll gladly show you around."

But then she asks: "Who are you? Do you speak German?"

Verhoeff is a joyful woman who smiles often and enjoys exercise. She is also a bit vain, fidgeting with her curled hair, knit pullover and pearl necklace until they are just right. Her hands display composure, mainly moving only at the tips of her delicate fingers. A well-educated woman, Verhoeff attended college, learning English, French, German and accounting. She was ambitious, a bank worker whose daily life was defined by money, order and clear oversight.

But she is also a forgetful woman. Since the dementia laid waste to parts of her brain, chaos rules her mind. The past has grown into a thick clump, occasionally spitting out moments of memory that may relate to the present, though not necessarily to reality. But what remains is the rhythm of her life, which is punctuated with decorum revealed in straight posture at the dining table and politeness to strangers.

The village of Hogewey creates ties to what remains despite the dementia, the partialities and feelings that are more important because the brain no longer functions properly. The facility outside Amsterdam offers an answer to how society can handle the disease, from which some 1.3 million people in Germany alone suffer. Instead of isolating these people in care homes, Hogewey keeps them dry, fed and clean while still making arrangements for their individual wants and needs.

Freedom in a Protected Environment

Jo Verhoeff has 85 years of life in her head, but what remains is only the present. She lives in the moment. But the here and now is also forgotten in an instant. It's as though she's being constantly reset. "I'm Brenda," her caretaker says each day dozens of times. Verhoeff is surrounded by strangers, though she has lived with many for years. They share the kitchen, sofa, television and dining table, but nothing binds them. Everything is always new -- the route to the toilet is a riddle, as is the need to go at all. For those who don't know anything anymore, everything is threatening.

But Hogewey aims to ease this fear by taking it seriously.

The facility, which opened in December 2009 and was built with a total of €1.5 million (around $2 million) in funding from sponsors, is the only institution of its kind in Europe. The Netherlands' Alzheimer Foundation has praised the village as "exemplary," and it is attracting the attention of caregivers across Europe and around the world. A number of institutions in Germany that provide care for the country's close to 1.3 million dementia patients have even sent workers to Hogewey for training. And plans for a similar village are afoot in Switzerland.

Hogeweay's 152 residents live in groups of six in a small community that is closed off to the outside world. There are seven accommodation styles that correspond to Dutch lifestyles that have been meticulously researched by a polling institute: rustic, urban, Christian, upscale, Indonesian, culturally accomplished and familial. Hogewey is a shrunken Dutch city.

Residents are allowed to freely roam the streets, sit in the sun, stroll in the rain or enter each others' homes -- the doors are always unlocked. Hogewey offers freedom in a protected environment. Those who get lost are brought home by carers. There's a supermarket where those who forget their wallets can still check out, and patients who fill their carts with 14 jars of apple sauce are allowed to bring them home. An attendant will return them later.

The house Verhoeff calls home is of the urban type, filled with residents from Amsterdam and nearby. They worked in the city as bankers, business owners and truck drivers. They prefer folk music to Bach. They fold laundry on the dining room table, peel their own potatoes and eat simply. Meals are cooked in every home each day, and the aroma of sautéed onions lingers in the air.

Living Together with Strangers

The environment is full of references to the past, from wallpaper patterns to antique clocks and opulent light fixtures. In Hogewey, time stands still, just as it does for residents there.

"When was I born?" Verhoeff asks, looking at the ceiling as though she's been asked an inappropriate question. "In 1927, Aunt Jo," says Brenda Smart, her nurse. "That's a long time," says Aunt Jo, nodding as though she ought to confirm it.

Three seats away sits a wiry old man dressed in a jacket and tie with his gray hair neatly parted. He visits his wife each day and plays solitaire as she is rolled into the room in a wheelchair. He takes her hand, still playing cards with the other, and they do not speak. At some point she begins to sob, tears running down her cheeks. Dementia suspends inhibitions and sets emotions free. Without a word, the man plays on while his wife cries. She will break into tears frequently this afternoon, but she won't speak.

Verhoeff sits near the people with whom she shares her home, but she doesn't see them. Even together, it's every man for himself.

Meanwhile another resident, Corry Otter, is having a bad day. Physically compressed by age, she prowls through the apartment, her black trousers fluttering around her thin legs, a grey cardigan baggy over her belly and stretched tight across her back, which is hunched over from years of scrubbing, polishing and washing. Her hair is dyed a caramel color -- there's also a beauty parlor in Hogewey.

"It's going to be a bad summer," she says, gripping at the winter jacket she wears. "A bad summer." She goes to the window, where she lays her head down like a child, then grimaces, baring her teeth and ranting in an imaginary language. It will be like this for the rest of the day. Back in the hallway, she takes a new route -- out the front door in her house shoes. That's no problem in Hogewey.

"I'm taking a vacation here, did you know?" Verhoeff says while sitting on her bed, which has bedding emblazoned with the Ajax Amsterdam football team logo. She's a happy woman. Her college diploma as well as multiple certificates of achievement hang on the wall, proof of the depth of her education. "The next time you come to Amsterdam," she adds, "I'll introduce you to my parents."