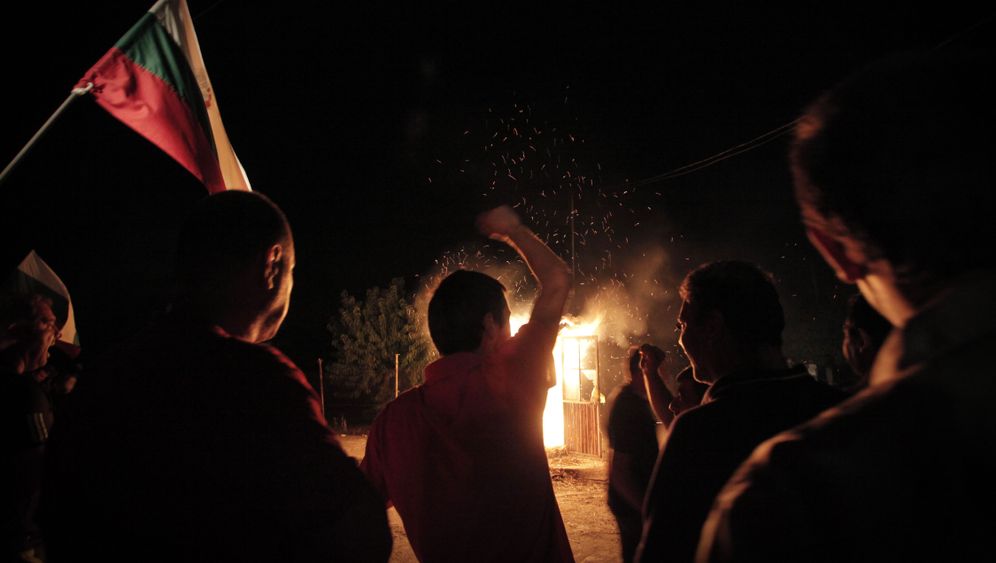 In several eastern European countries, a modern form of civil war is being waged. The governments of the Czech Republic and Bulgaria have been down-playing it for years, and the western public knows little about it: It is a war against the Roma. There are marches against them. Self-proclaimed vigilantes bully and threaten them. Walls are built around the sections of town where they live. Their houses are set on fire. They are forced out of their homes and sometimes brutally murdered.

This war is being waged in part by paramilitary organized right-wing extremists or right-wing terrorists, in part by hooligans, and in part simply by enraged and otherwise respectable citizens. Almost everywhere, the authorities have stood aside and watched for a long time. In the end, law enforcement only prevents the worst, sometimes.

"We are almost outlaws," says the Hungarian Roma activist Aladár Horváth, who, after more than three decades of human rights work, feels he is fighting a hopeless cause.

In Bulgaria, the situation is much the same, with persistent violence against the Roma. It often starts with private, at times banal disputes between Roma and non-Roma. About debts, petty theft, or simply insults made while drinking. The actual causes of such disagreements are seldom able to be reconstructed. They often end in injuries, and sometimes in death. In the end, it can result in pogrom-like riots and vigilante justice that has nothing to do with the initial event.

The scale of the violence against Roma in eastern Europe could be curbed if authorities cracked down properly on crimes, be it crop theft, organized crime, or vigilante justice. But that is not the case. The countries in the region have a serious authority problem. Their institutions are weak, ailing and corrupt. In the "Wild East" people get their way if they have the right connections and are willing to pay high bribes.

In such circumstances, the Roma are easy scapegoats. They're at the bottom of society, have no lobby and are poorly-organized politically. There is societal racism against them, and it is legitimized by a majority of the ruling elite. Many observers are already talking about a breakdown in civil society in eastern Europe. In reality, many countries in the region only look on paper to be well-integrated into modern Europe. Often overlooked by western Europe, the discourse among eastern European elites is filled with racism and nationalism, and violence against minorities is indirectly legitimized.

But the web of reasons behind the escalating violence against Roma in eastern Europe is more complex. The various Roma communities differ strongly from each other but are united by poverty and an immense lack of modernization. Under the Communist dictatorships this deficit was concealed, but not eliminated, through compulsory education and work.

After 1989, the post-Communist governments abandoned the Roma. Poverty and ghettoization rose sharply. Extremely precarious living conditions, including illiteracy, a lack of healthcare, unemployment, dependence on limited state assistance, or a downward slide into prostitution and petty crime have, in many Roma groups, been a valid model of existence for generations.

Not a single eastern European country or the EU has proposed a comprehensive strategy for helping the Roma get out of this situation. Although individual countries and the EU make millions available in aid to the Roma, the money is soaked up by authorities, for studies or conferences, or by Roma organizations themselves. Recently, the Romanian sociologist Nicolae Gheorghe, a long-time representative of the Roma at the OSCE, stated that the tiny Roma elite in eastern Europe has not succeeded in helping the majority of Roma out of their misery. Instead, everywhere in eastern Europe there is a small, bureaucratic Roma elite that spends aid monies on itself.

The lack of prospects for the Roma in eastern Europe has prompted tens of thousands of them, primarily from Romania and Bulgaria, to head west. Roma refugees have come to Italy, Spain, France, England, and recently also to Germany's large cities. In the western European countries they work for a couple of euros an hour doing cleaning, construction, or they beg. Some steal.

Depending on their legal status, they receive social welfare. For many, it is more than they could have ever imagined in their home countries. But naturally, western Europe can't solve the decades-old social problems that built up back in eastern Europe.

A coherent Europe-wide strategy is needed to help the Roma with their lack of prospects in their home countries. No one should be under the illusion that success will come quickly. What is called for is time-consuming social work that will take years.

But more is needed in order to stop the civil war against the Roma in eastern Europe. Above all, empathy is needed. That is something that is widely lacking among the political elite in eastern Europe, at least when it comes to the Roma. In 1993, after three Roma in the Romanian village of Hadareni were lynched with the involvement of the police, the government, in its official explanation, expressed understanding for the "anger of the villagers."

And in February 2009, when right-wing extremists in the Hungarian village of Tatárszentgyörgy set the house of a Roma family on fire and shot the father and his young son as they fled from the flames, no member of the Hungarian government called on people to unite to stop the violence.