The senior members of the German central bank, the Bundesbank, regarded Axel Weber with a look of anticipation. What would Weber, the Bundesbank president, say about the serious crisis that had them all so worried, they wondered? And what did he intend to do about it?

Weber said nothing and, as some who attended the meeting report, even his facial expression was inscrutable. The Bundesbank president remained stone-faced as he acknowledged the latest figures, which indicated that by the end of last week the European Central Bank (ECB) had already spent close to €40 billion ($50 billion) on buying up government bonds from Spain, Portugal, Ireland and, in particular, Greece.

The ECB already has about €25 billion of Greece's mountain of debt on its books, and it is adding another €2 billion a day, on average. The Bundesbank, which has a 27 percent stake in the ECB, is responsible for €7 billion of the ECB's Greek government bonds.

Many Bundesbank members are wondering why the ECB is buying Greek bonds in the first place, particularly on this scale, now that the euro-zone countries' €110 billion bailout package for Greece has been approved, and the first tranche of the funds has already been disbursed.

The general €750 billion rescue fund for the remaining highly indebted countries has been approved but not yet set up. For this reason, it certainly makes sense to stabilize the prices of Spanish, Portuguese and Irish bonds. Nevertheless, some of the central bankers have a sneaking suspicion that there is a French conspiracy at work.

By buying up Greek debt, the ECB keeps the prices of the bonds artificially high. French banks, in particular, benefit from this policy because it enables them to sell their Greek bonds to the ECB, as an inexpensive way of cleaning up their balance sheets. France's banks and insurance companies have a total of about €80 billion in Greek government bonds on their books.

German banks, on the other hand, are not potential sellers, because they have made a voluntary commitment to Finance Minister Wolfgang Schäuble to hold their Greek bonds until May 2013.

Thus, in a roundabout way, the Bundesbank, by spending €7 billion to purchase the Greek securities, has already made a substantial contribution to bailing out banks in neighboring France.

It was ECB President Jean-Claude Trichet, a Frenchman, who, in an alarming and provocative speech, initiated the extensive euro rescue package that was approved on the weekend of May 8-9. And it was Trichet who yielded to massive pressure from French President Nicolas Sarkozy and, soon afterwards, violated a long-standing ECB taboo, namely that the central bank should never buy its member states' debt. This, however, was precisely what Sarkozy had demanded of his fellow European leaders, including German Chancellor Angela Merkel.

Weber, the Bundesbank president, voted against this measure in the ECB council and criticized it the next day in an interview with the German financial newspaper Börsen-Zeitung. For a central banker, this is a very clear signal of dissatisfaction. But the Bundesbank president faces a dilemma, because he hopes to take over as ECB president when Trichet's term expires next year. The general consensus in the German government is that if he continues to fight against the purchase of the bonds, his prospects for securing the top ECB post will dwindle.

But many German central bankers expect Weber to remain steadfast and not give in. For them, the purchase of government bonds is a betrayal of the principles of the once-proud institution. By deciding to do so, they say, the ECB has lost its status as an independent central bank -- and, along with it, so has the Bundesbank. And then there is the fear of the consequences of such a purchase, which many central bankers believe could jeopardize the very existence of the ECB.

However, European central bankers do not know how long the ECB will continue to buy government bonds. That depends on how bond prices fluctuate in the euro-zone countries in question.

Every morning, the so-called Market Operations Committee (MOC) of the ECB analyzes the situation. The committee, whose members the ECB does not identify, supports the central bank in its monetary policy affairs, foreign currency transactions and the management of currency reserves. But the MOC has also become the bridge from which the central bankers are managing the euro crisis.

The Bundesbank's representative on the MOC is Joachim Nagel, head of the central bank's markets department. In closed-door sessions, he and his fellow committee members determine when and for what amounts the ECB and the euro-zone central banks, in concerted actions, buy up the government bonds of highly indebted euro countries to support their prices and thus maintain yields at a tolerable level.

The central bankers have informally agreed on what constitutes this tolerable level. The MOC's goal is to manipulate the markets in such a way that bond prices level off at the values that were in place on April 9, before investors, fearing that the governments could default on their bonds, launched into a massive sell-off of the securities.

Bonds worth about €3 billion are now being purchased on every trading day, with €2 billion of the bonds coming from Athens. At the moment, there is no improvement of the situation in sight. "The ECB and the national central banks operating on its behalf are currently the only buyers to speak of," says one market insider.

This policy effectively makes the ECB a so-called "bad bank" (a bank that buys up toxic assets as a means of helping out other institutions), all protestations of its president to the contrary. The pile of junk bonds on the ECB's balance sheet continues to grow. The fact that the ECB is keeping prices artificially high is downright encouraging banks to unload their risky assets onto the central bank.

Thorstein Polleit, the chief economist of Barclays Capital Deutschland, puts it this way: "The ECB is creating excess supply by buying at overinflated prices." In other words, many creditors are more inclined to sell their risky assets to the central bank under these terms. "It's a free lunch," says a top Frankfurt banker. "Anyone who doesn't take advantage of this opportunity to get rid of his securities now only has himself to blame."

But in pursuing the policy, the ECB has backed itself into a corner. What will happen if it stops supporting the market? Will the prices of the bonds of highly indebted countries then hit rock bottom?

Time for a Haircut?

To make matters worse, very few financial experts believe that the governments in question, particularly in the case of Greece, will get a handle on the debt crisis. Deutsche Bank CEO Josef Ackermann recently voiced such doubts, saying that such a failure would result in a so-called "haircut" -- that is, a debt waiver on the part of creditors. If that happened, Ackermann said, the ECB itself could be in jeopardy. The central bank's capital, currently about €70 billion, most of which is invested in the national central banks, would be severely affected or even completely exhausted, depending on how much longer the central bank continues to buy Greek bonds.

The member states would also have to inject new capital into the ECB, a particularly difficult undertaking for highly indebted countries.

Another option for the ECB would be to issue its own bonds to recapitalize itself. But this too creates a problem: At what interest rate would investors lend money to the central bank under these circumstances?

The only remaining solution would be one that has always led to inflation in the past, namely firing up the printing presses.

Although that scenario is unlikely to materialize, those who have always believed that a few days of robust ECB market intervention would be enough to reassure market players and bring yields back to a normal level were mistaken.

At first glance, the ECB's efforts to support the bonds of highly indebted countries would seem to have a neutral effect on its balance sheet, because it reflects a value for the bonds corresponding to their price. But the truth is that good money is being paid for bad debt.

The German finance minister, in particular, will feel the effects of this policy. The Bundesbank normally transfers its profits to the federal government at the end of each year -- in euros, not Greek bonds.

But paying for the bonds ties up available funds, thereby reducing profits, presumably for years to come. This too has a seriously adverse effect on the self-confidence of the central bankers.

Things could get worse. If creditors were in fact forced to forego a portion of their claims, this flow of payments could even be reversed. Under that scenario, the federal government would have to transfer money to the Bundesbank to offset its losses. 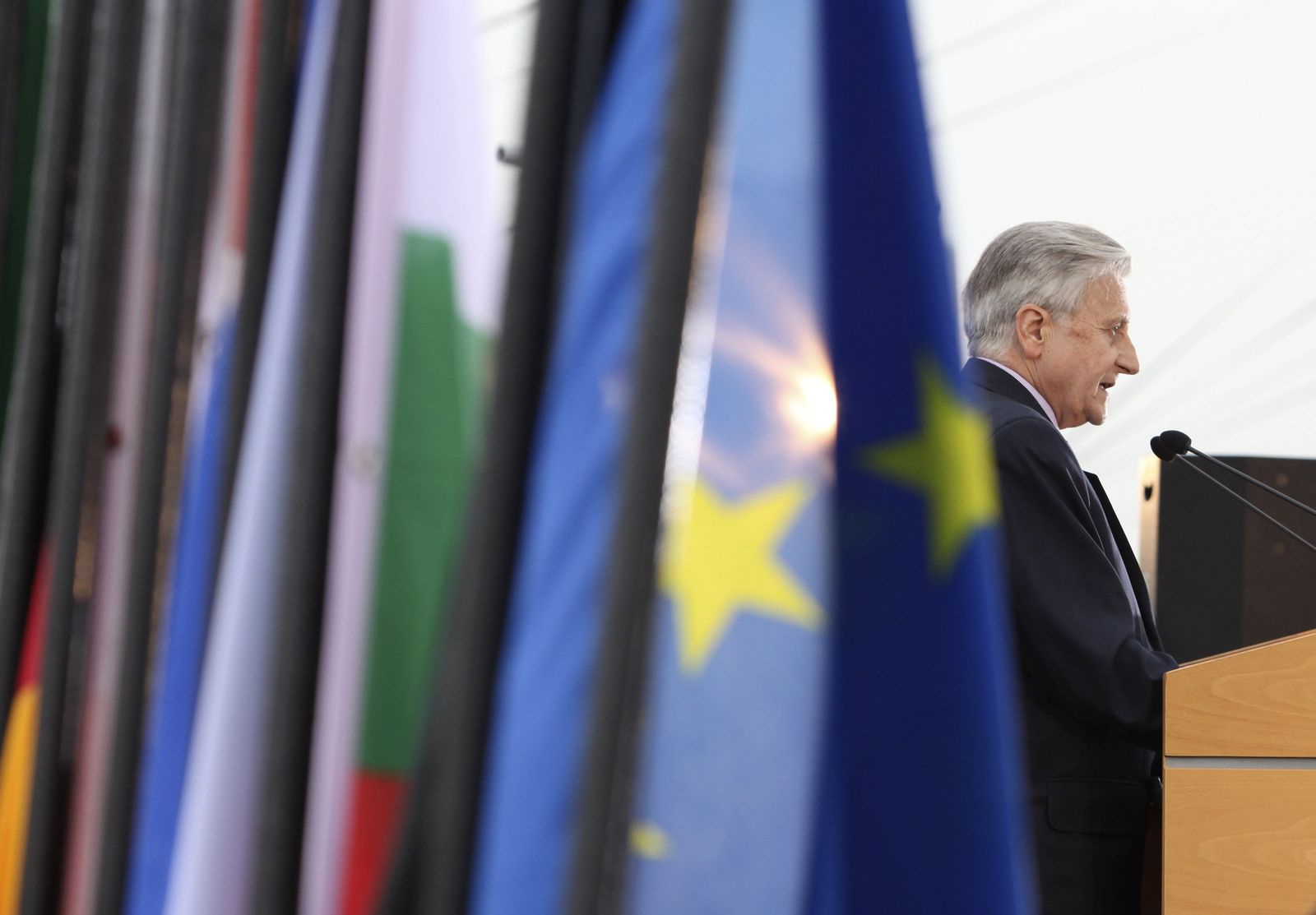