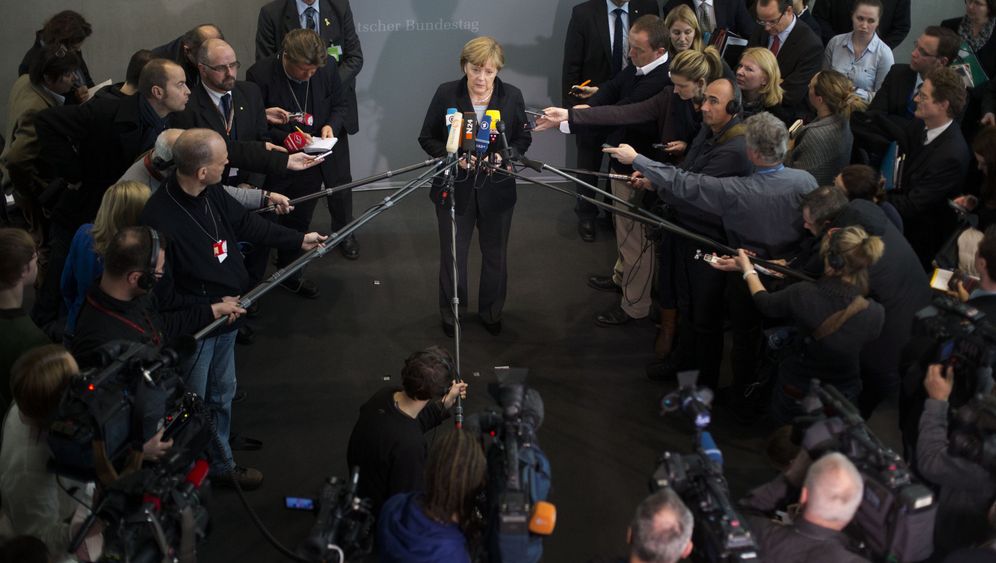 Following the Cypriot parliament's Tuesday evening rejection of the euro-zone bailout package for the country's ailing banks, many have begun looking to assign guilt for the debacle. And in both Nicosia and Berlin, many have identified Chancellor Angela Merkel as bearing much of the blame.

More important, however, is identifying what to do next. And even as Cyprus has turned to Russia on Wednesday in the hopes of finding billions in emergency funding, some European leaders have begun increasing the rhetorical pressure on Nicosia, clearly articulating the potential consequences of the country's move.

German Finance Minister Wolfgang Schäuble on Tuesday night told German public broadcaster ZDF that Berlin "regrets that the Cypriot parliament has rejected the program negotiated by the Euro Group and the Cypriot government." He then implied that the common currency area still holds all the levers. Two of the country's largest banks, he said, are being propped up by emergency liquidity from the European Central Bank (ECB). "Someone needs to explain this to the Cypriots," he said, ominously.

Merkel said that "of course Germany wants a solution" but added that "the current banking sector is not sustainable."

For anyone who somehow missed the message, ECB Executive Board member Jörg Asmussen spelled out the potential consequences on Wednesday in an interview with influential German weekly Die Zeit. The ECB, he said, "can only provide emergency liquidity to solvent banks." He made clear that he has doubts that Cypriot banks are solvent.

Austrian Finance Minister Maria Fekter likewise threatened an ECB funding stop. If Cyprus didn't come up with a new plan quickly, she said, then "the banks won't open on Friday because the ECB will not provide any more liquidity. That is a more horrible scenario than what is on the table now. We will certainly help the Cypriots, but only under conditions that make sense. Certainly neither the ESM nor the ECB can allow a bottomless pit."

Media reports appear to back Fekter's assessment. Citing sources within the Cypriot government, German news agency DPA reported on Wednesday morning that banks in the Mediterranean island nation might remain closed through the end of this week. Because next Monday is a bank holiday, they wouldn't reopen until next Tuesday.

Still, Fekter's "bottomless pit" warning would seem to be something of an exaggeration. The numbers involved are not huge; the plan rejected on Tuesday called for the European bailout fund, the European Stability Mechanism (ESM), to provide a €10 billion emergency loan. A further €5.8 billion was to come from a one-time levy on those who hold accounts with Cypriot banks. The modest size of the bailout is likely the reason for the apparent lack of concern with which financial markets have taken note of the Cypriot rejection. The euro is up against the dollar on Wednesday and the German stock market is also trading in the black. A Portuguese debt sale also went off without a hitch.

Anger with Germany, though, remains high. Indeed, images of Merkel wearing a Hitler moustache -- similar to posters used from Madrid to Athens -- have begun to appear in protests in Nicosia.

Merkel, of course, has become used to the insults from abroad. But now, following the Cypriot parliament's clear rejection on Tuesday evening of a bailout package designed to prop up its ailing banks, the attacks are coming from much closer to home. Germany's opposition Social Democrats, who have long begrudgingly backed Merkel's euro-crisis course, have blasted the chancellor for bungling the Cyprus bailout.

The Difficulty of Restoring Trust

"Even if Merkel would prefer to ignore it: The Cyprus disaster bears her handwriting," SPD head Sigmar Gabriel told SPIEGEL ONLINE on Tuesday evening. "Angela Merkel has made it possible that a country with fewer inhabitants than (the small German state of) Saarland has plunged the entire euro zone into chaos."

He said that she was deeply involved in the negotiations over the package, which called for holders of accounts in Cypriot banks to be charged a one-time levy to help raise money to prop up the country's financial institutions. "Merkel is partially responsible for the fact that in Cyprus, small savers are to pay the bill while bank owners are untouched," Gabriel said. "Restoring trust in Europe will be difficult."

SPD parliamentarian floor leader Frank-Walter Steinmeier joined in on Wednesday morning, although he shied away from frontal attacks on Merkel. "Yesterday evening, the euro crisis returned," he said on public television station ARD. "The chaos is complete."

The comments, no doubt, were made with an eye toward general elections this autumn. The SPD has repeatedly signalled that it would no longer simply rubber-stamp Merkel's bailout plans and had threatened to veto aid to Cyprus if certain conditions were not met. Given the significant number of euro-crisis rebels in Merkel's own ranks -- and growing frustration among the German populace -- the threat is one that the Chancellery has taken seriously.

But the initial reactions also reflected the concern that Nicosia's "no" has triggered. Casting blame is the easy part; coming up with a solution is another matter. Initial hopes that Russia might jump in to help out may not prove realistic. Steinmeier, formerly Germany's foreign minister, said "we are misleading ourselves a little bit when we assume that Cyprus is a particular favorite of Russia's."

Should Moscow refuse, the Church of Cyprus has said it would be willing to leap into the void. Cypriot Archbishop Chrysostomos II says he would put all of the church's assets at the country's disposal to help pull it out of crisis.