It looked like a showdown: Mario Draghi, the head of the European Central Bank (ECB), versus Jens Weidmann, president of Germany's central bank, the Bundesbank, and Draghi's sharpest critic within the ECB Governing Council.

Representatives of both the ECB and the Bundesbank have been summoned to testify before Germany's Federal Constitutional Court on June 11 and 12, when the court will address German policy on the effort to save the euro. But Draghi won't be there. In his place, German ECB Executive Board member Jörg Asmussen will be traveling to the southwestern city of Karlsruhe, where the court is located. Even though Draghi -- like Weidmann -- would only be asked to testify as an expert witness, he apparently knows that he would be treated like a defendant.

What is ultimately up for debate is Draghi's most spectacular rescue effort for the euro to date: the new ECB program to buy up government bonds, the announcement of which last summer was already enough to bring some calm to the euro crisis.

Meanwhile, politicians and a citizens' initiative have filed a constitutional complaint in Karlsruhe, and Weidmann is also relentlessly fighting the project. In a rather sharply worded statement, the Bundesbank declared that the program would jeopardize the ECB's independence and warned against a "slippery slope" on the issue of monetary policy. It was an affront to Draghi.

Draghi and the Germans

The relationship between the two men is now so badly broken that all attempts by ECB colleagues to reconcile them have failed. An exasperated Draghi perceives Weidmann's constant admonitions simply as a "Nein zu allem" strategy. German for "no to everything," it's one of the few German expressions the ECB president has mastered since moving to Frankfurt, where the ECB is headquartered.

Draghi feels misunderstood in his new home, both by Weidmann and by a majority of Germans. For Draghi, Germany's staunch insistence on principles means putting the euro zone on the line. For example, his fellow monetary watchdogs in the ECB tower fear that if the Federal Constitutional Court in Karlsruhe declares the bond program to be unlawful, the relative calm in the financial markets could end very quickly.

This is why Draghi has often said "yes" since assuming the ECB presidency in November 2011: yes to enormous amounts of liquidity for euro-zone banks, yes to the purchase of government debt and yes to the idea that going forward, the ECB should supervise the 6,000 banks in the euro zone.

For Draghi, the ECB is not just a central bank, but apparently also a massive think tank focused generally on euro rescue policy. The organization must sometimes act as an "intellectual catalyst," Draghi said in an opaque statement to a confidant.

He is pursuing a dangerous path, and Weidmann isn't the only one who is skeptical of Draghi's experiments. The ECB president's latest project, a funding program of sorts for cash-strapped small and medium-sized European businesses, also puzzled other governors on the ECB Council.

Draghi has long been concerned about the financial troubles of a number of small and medium-sized companies in crisis-ridden countries, such as Spain and Italy. For months, he has repeatedly pointed out his worries. Credit is either unduly expensive or "not there" in some areas, even for healthy companies, he says. The experiences of the financial crisis have made the banks cautious.

The liquidity assistance the ECB has been pumping into the banking system almost limitlessly since the financial crisis began is just as unhelpful as the historically low interest rate of 0.5 percent at which banks can borrow from the central bank. This is why Draghi was planning a new coup: He wanted to stimulate the seemingly dead market for collateralized debt obligations, securities with which banks can sell the risks of outstanding loans to courageous investors.

The only problem is that packaging debts in such a way is part of what triggered the financial crisis in the United States. When there were growing calls in the ECB to possibly buy the arcane securities, an old rift was reopened. Representatives of the south, who regularly ask for more help, found themselves at odds with governors from the north.

Critics raged that the ECB is not a development bank, and that it would run the risk of being misused as a so-called "bad bank" for non-performing corporate loans. In addition to Bundesbank President Weidmann, there were even members of Draghi's Executive Board who opposed the idea.

The Finance Ministry in Berlin also stood behind the attacks. Finance Minister Wolfgang Schäuble even speculated that the program could indirectly signify "hidden government funding" for Draghi's native Italy.

Meanwhile, there is talk within the ECB that the issue is not of "the highest priority," but rather only one option of many. For now, it is being considered by a task force that is searching for solutions together with the European Investment Bank (EIB).

The episode shows how Draghi is sometimes forced into the defensive at the ECB. Even Asmussen, whom Draghi long viewed as a loyal ally, has repeatedly opposed his boss recently. Not only was he among the opponents of the program for small and medium-sized businesses, but he also voted against the ECB's most recent decision on interest rates.

It was apparently a decision based solely on the facts.

But Draghi, with a wink, sometimes divides the governors on the council into "friends" and "not-so friends." At the moment, he can't be quite sure who belongs to which group. 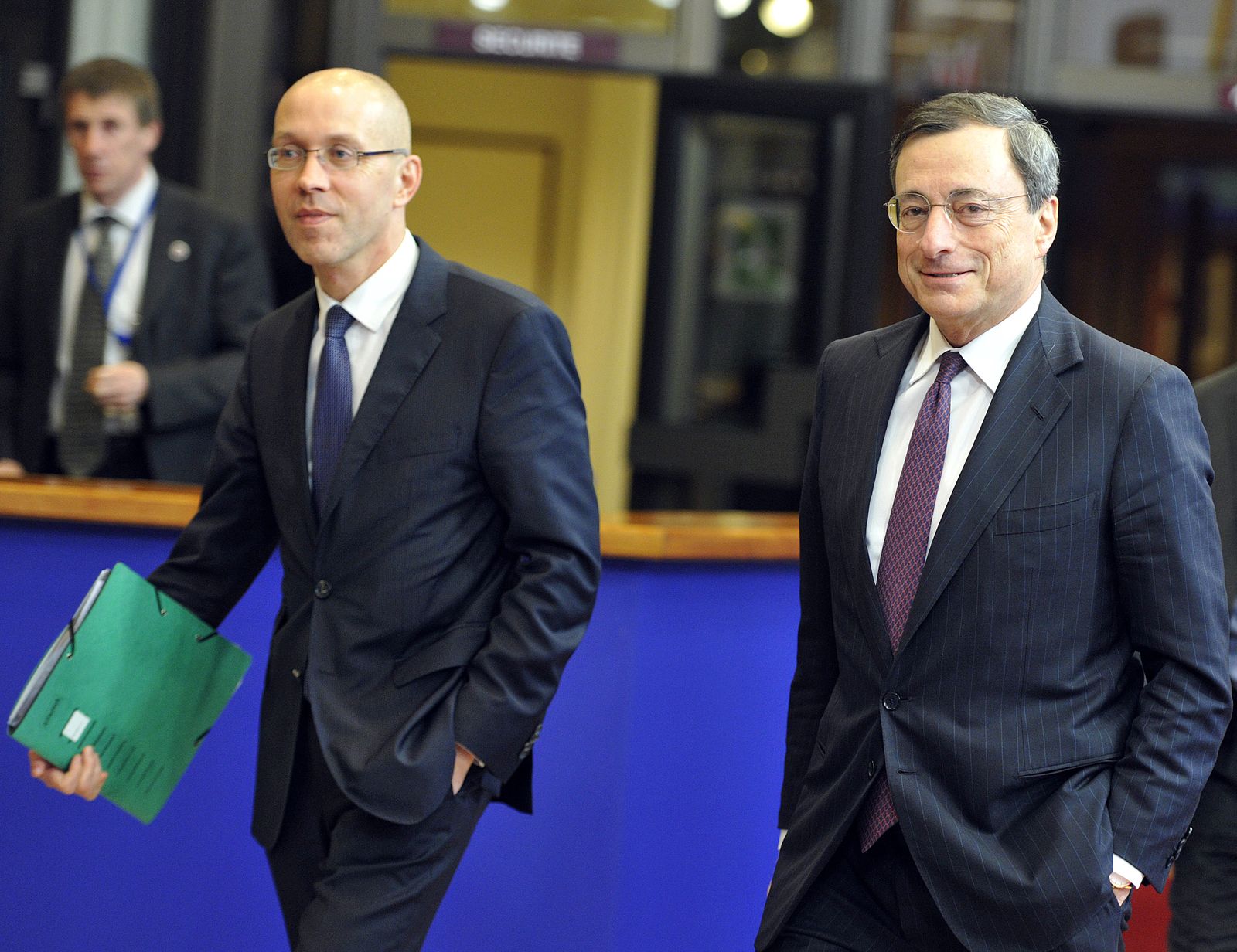