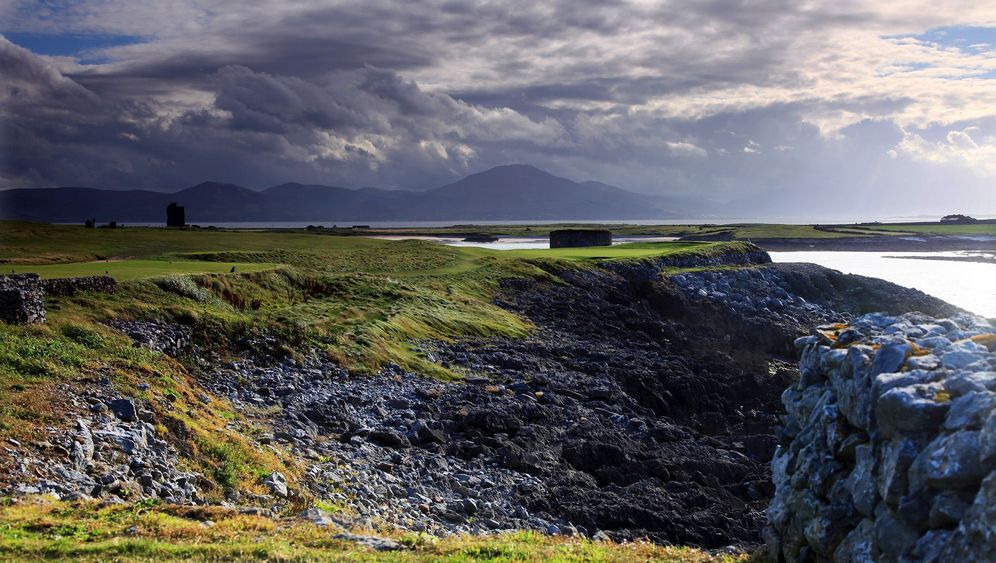 A thick fog blankets Kilfynn. Despite poor visibility, Mike Parker steps on the gas. It's half past midnight, and it's been a long day. He can only go to bed once he's gotten John and Dan home safe.

"The two had a few beers in my pub," he says. And it would be "much too dangerous" to let them go home alone and drunk in this weather along the narrow roads that wind through the countryside here in County Kerry, in southwestern Ireland.

Once Mike has locked up his pub at midnight, his second shift begins, driving his patrons back home. On a normal weeknight, he puts in more than 30 kilometers (19 miles) behind the wheel. On the weekend, he can be on the road for up to 2 hours. Kilflynn has about 300 residents, two pubs, two churches, a general store, a small restaurant and a post office.

Out here in the countryside, there aren't any cabs. And even if he orders one from Tralee, the closest city, it takes almost half an hour to show up. In any case, taxis are too expensive for many patrons. So now Mike is offering free rides. "Without this service," he says, "I would've had to close down my pub a while ago because many guests would stay home."

Ireland's economy is in shambles, and the country is stuck in one of its deepest recessions in decades. The government is implementing austerity measures, and average people are paying the price with higher taxes and fewer social services. Many Irish are buried in debt or can't find a job -- or both.

Under these circumstances, they can't afford to spend about €4 ($5.30) on a pint in a pub, buying it instead for roughly half as much at supermarkets or gas stations. With patrons cutting back since the crisis struck some five years ago, more than 1,500 have gone under.

Through Good Times and Bad

Parker is also feeling the effects of the crisis at his pub, which has been in the family for three generations. "Things have gotten quiet," he says, "especially during the week." The local farmers used to stop by before noon for a quick beer, he adds, but now he doesn't even open until around 5 p.m. because nobody would show up before then.

The idea for the ride service was his father's. At first, Mike was only driving a few people home. But now that word of his service has made the local rounds, he says, "some people are coming to me just for that."

Today, the pub is full. It's Thursday, and the local hurling team is playing in the neighboring town and expected to drop by after the match. Parker is sporting one of the team's warm-up jackets, which he wears with pride.

Many people have come to spend time with the team. Men sitting around small tables are talking about the government and the bad weather. In the corner, five young people are getting their instruments out to play traditional Irish songs.

"We grew up here with this music, and we already start learning to play the instruments as children," says 14-year-old Susie Rice. Her violin once belonged to her grandfather. "It means a lot to me to play on the same violin he did," she says.

John Brennan is listening to the music and rocking his leg to the beat. "The pub is a meeting place for young and old, for musicians and farmers," the 67-year-old says. "It's not about the beer, but about meeting up with friends and other village residents."

John and his wife live a few miles outside Kilflynn, where he sells trucks. Business was a lot better before the crisis, but he prefers not to complain. "Many had very good years, but now times are bad again," he says, adding that that's just how it is. The Irish suffer in silence.

The Golden Days Are Over

The door opens, and another violinist walks in. Three years ago, he moved from Galway, a city in western Ireland, to tiny Kilflynn. "Seán came for love," John says while patting his shoulder. "That's not true," Seán jokes. "Love is what keeps me in this nest." Then Seán takes out his violin, sits on a stool, slides over to the other musicians and joins in the song.

A little later, seven men from the hurling team finally show up, heads hanging after having lost the match. A guest orders a round of drinks for the men from Mike and nudges their shoulders encouragingly. "The golden days are gone with sport, too," Mike says. Two years back, the team won the Country Kerry championship. But, these days, it's been losing one match after the next.

"We're having trouble just fielding a team," Parker says. In just the last month, five of the team's players have left Ireland because they couldn't find a job here. Three headed to Australia, while the other two are trying their luck in the United States. "The young people generally don't come back once they've left the country," Parker says.

Unemployment is a problem all over Ireland, but it's especially bad in Country Kerry. Almost one in four are without work, most of them young men who can't find a job. The suicide rate in the area surrounding Kilflynn is much higher than the national average. All of Ireland is currently focused on figuring out how it can offer young people a future.

Milk Too Expensive, Beer Too Cheap

John, the truck salesman, can understand why so many young people would want to leave the country. "If I had my whole life in front of me, I'd probably seek my luck abroad too," he says. Still, he's not just worried about the young; he also frets for the old. "Friends of mine live so far outside a village," he says. "Hardly any cars drive by for days."

Social isolation is the second biggest problem in rural Ireland. Just a few weeks ago, a television crew came to the area around Kilflynn to film a report on conditions there. It found that in many villages stores have shut down because of the recession, post offices have been closed, and even the police were forced to shut down rural substations -- in just another way the government is trying to cut costs.

It's gotten late now. Whoever doesn't have far to go has already headed home. John and Dan, a farmer, are sitting at one of the tables, drinking beer and talking about milk and beer prices. Milk is cheap, Dan says, but beer prices keep going up. That's not good news for many Irish. Mike approaches the table. "I'm closing up now," he says. "Drink up and go ahead and get in the car." Mike plans to first run the two home before coming back to take the members of the hurling team home.

As the van pulls into John's driveway, he suddenly gets antsy. "What's wrong? Lose your key?" asks Mike. "No," John answers. "I remembered that. But I fear I forgot my wife back in the pub. She was standing by the hurling fellows."

On this night, Mike will have to make an extra trip. But he says he doesn't mind -- just as long as people keep coming to his pub and enjoying themselves.