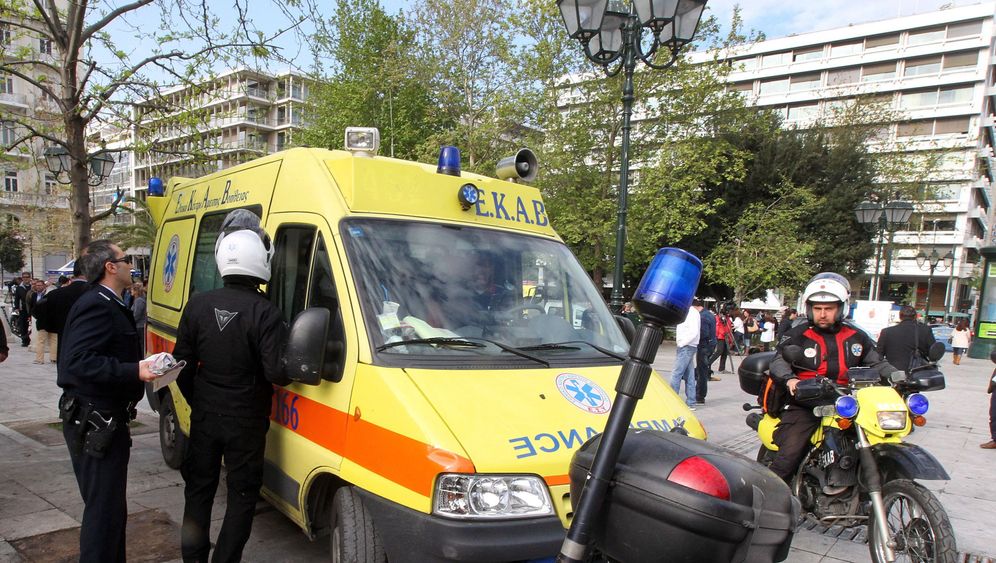 Photo Gallery: Fighting with Their Lives

These are also reports from Greece, reports that, at first glance, seem to have nothing to do with the economy. They come together to form a grim statistic, raising questions of what is triggering the suicides and whether the high incidence is merely a coincidence.

Or do people see suicide as a way out of the crisis that has taken hold of their country and their lives? Are they bowing out before things get even worse? Germany and the International Monetary Fund (IMF) are opposed to a new bailout package for Athens. The country faces a shortfall of at least €40 billion ($49 billion). Greece could very well be officially bankrupt by the fall.

Greece, a country whose Orthodox Church does not condone suicide, has always had one of the lowest suicide rates in Europe. But now, there were 350 suicide attempts and 50 deaths in Athens in June alone. Most of the suicides were among members of the middle class and, in many cases, the act itself was carried out in public, almost as if it were a theatrical performance.

On April 4, shortly after 9 a.m., a 77-year-old pharmacist shot himself to death on Syntagma Square in downtown Athens. Dimitris Christoulas, a short man, stood against one of the large trees on the square, held a pistol to his temple and pulled the trigger.

"My father was a political person, a fighter," says his daughter, Emmy Christoulas. Weeks after her father's death, she is sitting in her living room in Chalandri, a northern suburb of Athens. She is a slim 42-year-old wearing oversized jeans, her short black hair streaked with gray.

Her father was politically active, a member of the "We Won't Pay" movement. He repeatedly called for an international review of Greece's national debt because he was convinced that it wasn't the fault of the people. He had come to beleaguered downtown Athens every day last summer to take part in rallies and to lend a hand, usually in the Red Cross tent.

When he went to Syntagma Square for the last time, on April 4, he sent his daughter a text message consisting of one short sentence: "This is the end." Then he switched off his cell phone. "It was at exactly 8:31 a.m.," says Emmy, pulling a cigarillo from a crumpled pack. When she was unable to reach her father by phone after receiving the text message, she and two friends drove to his apartment.

She heard a news report on the radio that someone had shot and killed himself under a tree on Syntagma Square. "First the text message, and then that report," she says. "I was sure it was him."

Since her father's death, Emmy Christoulas has taken the subway to the square, nine stops from her apartment, many times. She visits the memorial to her father two or three times a week, usually in the evening. When she does, she stands a short distance away from the tree.

It's become quiet in the square, where a band is playing and the sound of guitar music is wafting through the warm air. Christoulas crosses her arms over her chest and looks at the people who stop at the memorial. It consists of wreaths and a few stuffed animals leaning against the tree, as well as notes pinned to the trunk. "Don't walk like a robot! Open your spirit!" one note written in red letters on a piece of cardboard reads. The lines that Dimitris Christoulas wrote in a suicide note are engraved into a marble plaque.

The government has annihilated all traces for my survival, which was based on a very dignified pension that I alone paid into for 35 years with no help from the state. I see no other solution than this dignified end to my life so that I don't find myself fishing through garbage cans for my sustenance.

The words "Dimitris' gesture cannot be repeated" are written on a piece of paper above the plaque. But his gesture is repeating itself on an almost daily basis. The newspaper Ta Nea describes the mood among Greeks as a "society on the verge of a nervous breakdown." The uncertainty over what the next day will bring is growing by the day.

Christoulas ended his farewell letter with the words: "I believe that young people with no future will one day take up arms and hang the traitors of this country on Syntagma Square."

The sadness brought on by her father's death is not diminishing, says Emmy Christoulas, as she sits in her apartment. She twists the silver ring on her thumb and says: "When I don't think about it for a moment, I realize that I am no longer merely playing the role of his daughter." When she thinks about Greek society and the suffering around her, she says she wants to send her own messages to the country. One of them is: "Progress and change come through loss."

The way she describes it, it almost sounds like her father's suicide had been a political necessity - and that she has realized she has to make the best of it and continue the fight he began.

Emmy was five when she attended her first demonstration, perched on her father's shoulders. It was April 25, 1975, after the end of the Greek military junta. When she speaks, she quotes the Bohemian-Austrian poet Rainer Maria Rilke and the German philosopher Jürgen Habermas, and she talks about models of democracy and an open society. She believes in big ideas and, in this sense, she is very much her father's daughter. When she doesn't go to the bar in the evening to drink a glass of vodka, she stays home alone with her dogs. She doesn't talk much about her pain.

On the morning of April 4, Dimitris Christoulas put on his light-colored trench coat, stuck his pistol in one pocket and the farewell letter in the other, and set out for the square, as he had done so many times before, and wrote the last text message to his daughter.

On the day after the memorial service for her father, Emmy Christoulas drove her father's body 13 hours to Bulgaria to have him cremated. The Greek Orthodox Church denies church burials to people who have committed suicide. Her father had left her the money for the trip.

Christoulas, an assistant to a member of parliament with the left-wing Syriza Party, didn't go to work for two days. She resumed her life on the third day. Citizens shape politics, not the other way around, she says, repeating her father's mantra.

At first, she would remove the notes and collect the stuffed animals, which she kept in a box at home, whenever she went to visit the tree on Syntagma Square. When she goes there these days, she hardly glances at the notes and letters anymore, and it doesn't bother her when people come up and talk to her. "On the contrary," she says, noting that strangers often congratulate her. "It makes me proud and strong," she says. As long as it doesn't disappear from people's minds, she says his death has meaning. She sees it as an opportunity for those who want change -- and for those who use the only thing they have left, their life, to influence politics.

Nikiforos Angelopoulos, an Athens psychiatrist, has kept track of suicides and, with each new death, he has become more afraid. He tries to see each act as the failure of an individual, confused person.

The 60-year-old did his doctoral dissertation on the subject of "hostility." Suicide is a disorder, he says, a form of hostility -- a person's hostility against him- or herself. He is sitting in his office in the upscale Kolonaki neighborhood, a wiry man with a fringe of white hair and alert blue eyes. He is determined to prevent copycat suicides, but he fears that the wave is growing. It reminds him of the 1920s, when intellectuals committed suicide after Greece lost a war against Turkey. He wants to prevent more people from hanging, poisoning and shooting themselves to death.

The 90-year-old woman who fell to her death from a rooftop terrace on Vathi Square jumped together with her son. But the truth is that she didn't jump at all. Her son pushed her. Then he waited three minutes and followed his mother. It was a 15-meter (49-foot) drop to the pavement below. His name was Anthony Perris, a musician and writer, a quiet, 60-year-old man.

The spot where he hit the ground is three kilometers (2 miles) from Syntagma Square, next to the building where he lived with his mother. Perris had cared for his mother, who had Alzheimer's and cancer, for 20 years. He took her for a short walk in the small park outside every day. On the evening before the suicide, he closed the blinds in the apartment. The next morning, he took his mother into the elevator and up to the roof terrace above the sixth floor.

Perris also left a suicide note, placing it on the kitchen table. "My life has become a constant tragedy," he wrote. He tried to sell his house, but no one had the money to buy it. He owned a house, a boat and a moped.

"What's the use of owning things when you don't have any money to buy food?" Perris asked in his suicide note.

Everything that the papers are saying about the rash of suicides is "misleading and dangerous," says Angelopoulos, the psychiatrist. People who commit suicide, he notes, are not political fighters, even if the public turns them into heroes.

The pharmacist who shot himself to death on Syntagma Square was a desperate individual, just like all the others, says Angelopoulos, who sounds a little desperate himself. He is fighting a lonely battle. All the same, the Greek Ministry for Health set up a suicide hotline a few weeks ago. Despite all the budget cuts and austerity measures, it feels the expense is justified.

When asked whether she had any idea that her father would take his struggle as far as he did, Emmy Christoulas thinks for a while before answering. In retrospect, she says, there had always been signs. Shortly before his death, her father signed over to her the red VW Beetle the family used to drive through Europe. "He was suddenly in such a hurry," she says, but she didn't understand why.

On the morning after our visit with Christoulas, the Athens police received another emergency call. A 61-year-old man has hanged himself from a tree on a hill in Aghios Philippos Park, not far from his house. He was a sailor who had recently lost his job. He had a wife, a son, a daughter and a dog. His body was removed by the afternoon, a few hours after his death.

The red-and-white strip of crime scene tape is still hanging between two trees, fluttering in the wind above the big city.