Straubhaar: With the court's approval of the ESM, at least one important precondition for the euro rescue is now in place. Whether it ultimately succeeds depends on whether investors start feeling confident again that the euro will still be there for a while. But even if it doesn't succeed, I have no doubt that, if need be, politicians in all of the euro-zone countries are prepared to employ additional means to preserve the euro.

SPIEGEL ONLINE: Additional means? But we already have the ESM. And, on top of that, the European Central Bank (ECB) has announced an unlimited program of purchasing sovereign bonds from crisis-ridden countries. What more can be done?

Straubhaar: For now, the ESM can lend a maximum of €500 billion ($645 billion). But we know full well that this amount won't suffice, especially if Spain and Italy, for example, are cut off from the private capital market. If that were to happen, we'd have to either load up the ESM anew, or the ECB would need to intervene more aggressively. In a currency union, when there are worries that the shared currency might collapse, one has to be willing to do everything to re-establish the lost confidence in its continuity.

SPIEGEL ONLINE: Will the ESM now be the first to move to help crisis-ridden states, or will the ECB take the lead?

Straubhaar: ECB president Draghi has made it clear that the purchasing of sovereign bonds is also tied to ESM participation. In any case, I think it's better in economic terms if the assistance runs through the ESM. First, Germany has veto power in this case, while things in the ECB are decided by majority. Second, it's more effective to combat a problem having to do with fiscal policies with measures that also have to do with fiscal policies, in other words, with the money of the states and not via ECB monetary policies. Today's ruling once again gives fiscal policy the power to act, and that is completely sensible.

SPIEGEL ONLINE: If the ECB and ESM intervene, there is a dramatic increase in Germany's potential liability. With the ESM, that liability is currently limited to €190 billion, but it can be raised with the consent of Germany's parliament. From the very beginning, there has been no cap on Germany's liability through the ECB. Is Germany running the risk of overextending itself?

Straubhaar: What does overextension mean? That makes it sound like a state is a company that can go bankrupt and vanish from the market. That's a major misapprehension. A country can perhaps become insolvent, but it can't disappear any more than its population can. In this case, it's not about surviving; it's about redistribution issues. In the future, who will bear which burdens for solving problems? That's a political question, not an economic one.

SPIEGEL ONLINE: How does the Federal Constitutional Court's ruling affect the issue of redistribution?

Straubhaar: In general, it means that we will have to accept the idea of more redistribution -- and, of course, that means redistribution from the top down. Germany is a very prosperous economy in Europe, and a share of that prosperity will be redistributed to comparatively poorer European regions. That can be absolutely sensible if it causes the pie that supplies the basis for this distribution to grow larger.

SPIEGEL ONLINE: Does that mean we're on the path to becoming a transfer union?

Straubhaar: Yes, for sure. But, in the final analysis, we've been on that path since the founding of the European Economic Community in 1957, and we've always been going along it step by step. The only thing that's new is the scale.

SPIEGEL ONLINE: Is this path good for Germany?

Straubhaar: Yes, because the goal is a unified, peaceful, free and democratic Europe. That doesn't happen over night, but we'll get there step by step. The American states in New England and Texas, for example, also had to go through this same experience. They were thrown into the grinder in the name of centralization, which they didn't want in the first place, and they had to cede part of their sovereignty to Washington. That's a long process. And the only possible alternative was going back to a world of small states -- and, indeed, in economic, political and social respects, as well. 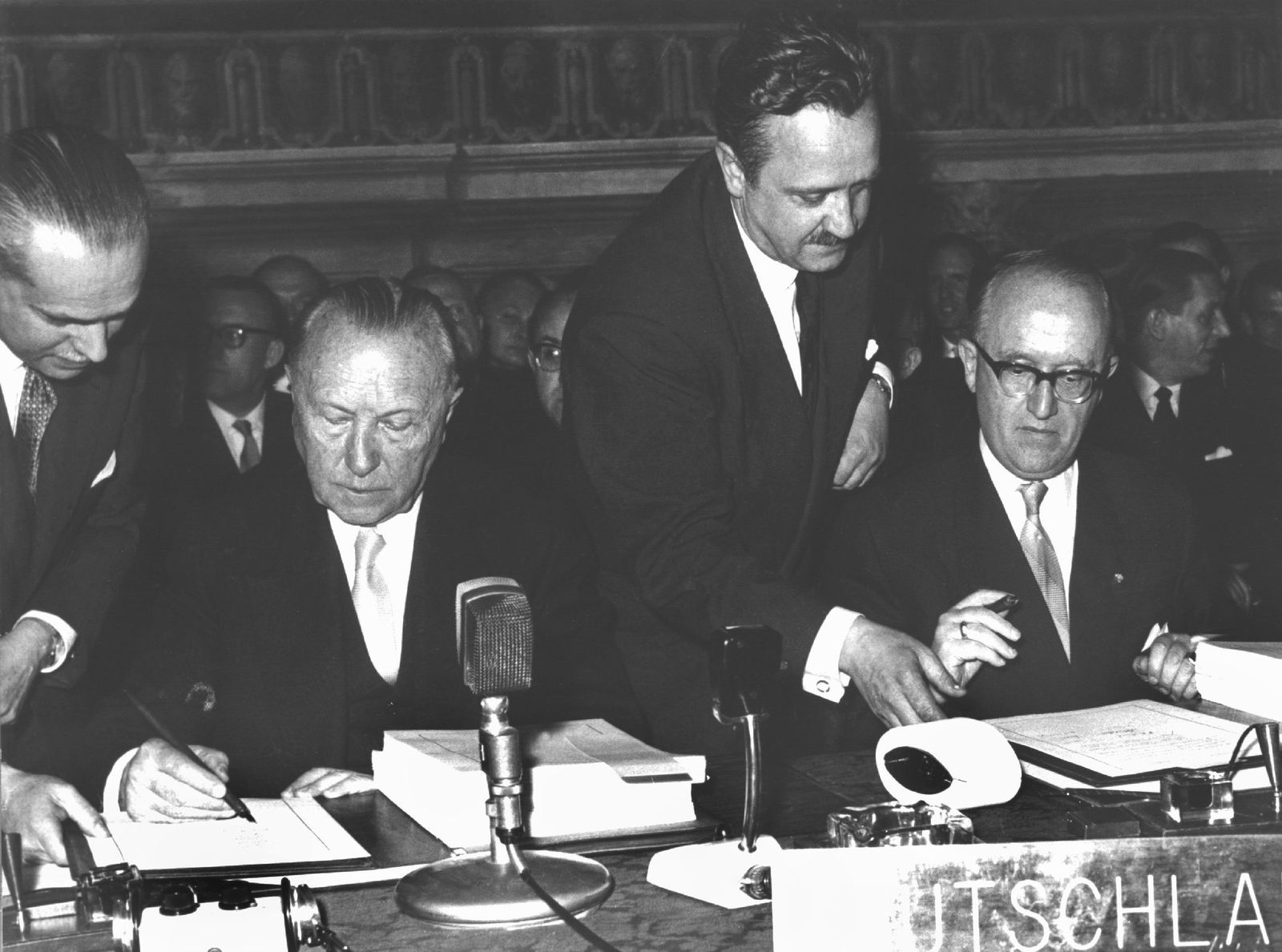 German Chancellor Konrad Adenauer (l) and senior Foreign Ministry official Walter Hallstein during the 1957 signing of the Treaty of Rome, which established the predecessor of the European Union.