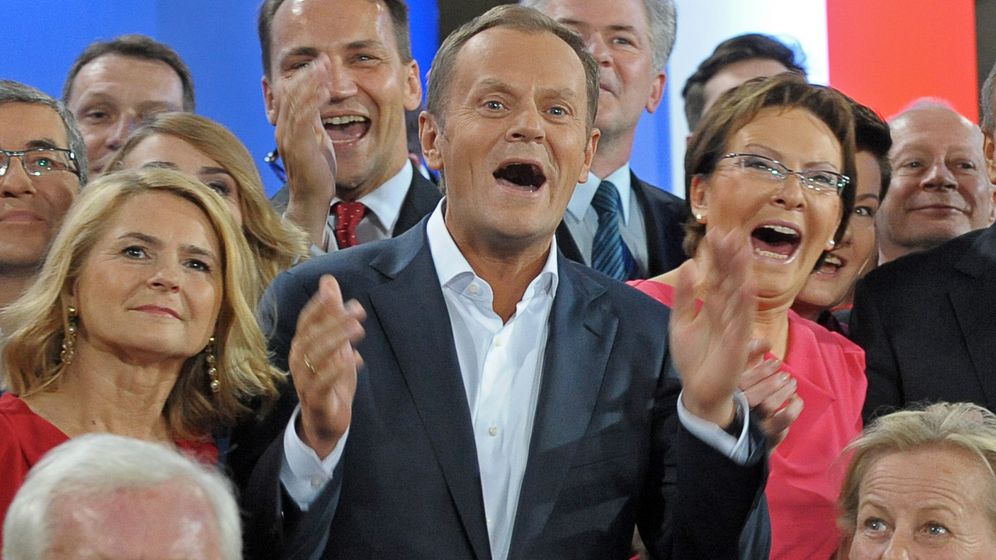 The polls in the last few days before the election had seen opposition leader Jaroslaw Kaczynski narrowing the gap with Donald Tusk more and more. But in the end the incumbent Polish prime minister won Sunday's Polish parliamentary election with a convincing lead over his conservative opponent.

Tusk's center-right Civic Platform (PO) won over 37 percent of the vote, according to the preliminary results, compared to Kaczynski's Law and Justice party which got just under 31 percent. The Peasants' Party (PSL) won around 8 percent, while the center-left Democratic Left Alliance (SLD) also got around 8 percent, a surprisingly poor result. Tusk will now try to renew Civic Platform's coalition with the PSL, with which he has governed Poland for the last four years.

Tusk is the first Polish prime minister to win a second term since the fall of communism. And yet he cannot be satisfied with his victory. After all, more than half of Poles who were eligible to vote stayed home on Sunday: Turnout was just under 48 percent, according to the polling institute TNS OBOP. Some 20 years after the end of communism, politicians and their staffs have a terrible reputation in Poland. Many Poles regard them as incompetent, petty, uneducated and often even corrupt.

The election winner is considered nice but boring. In recent weeks, he traveled the country in his blue "Tuskobus" in a bid to win votes. It did not help very much. Poland is doing well, but Poles do not attribute their country's success to Tusk.

Poland was the only European Union country to get through the global financial crisis without seeing its economy shrink. But most Poles do not really regard that as an achievement of the prime minister, who came to power in 2007. After all, during his term in office he has chosen the path of least resistance and neglected to carry out reforms. The country's public sector is still large and expensive, the roads are terrible and the Polish rail system leaves much to be desired.

It is not even certain that booming Poland will manage to get the stadiums for the 2012 UEFA European Football Championship, which the country will co-host with Ukraine, ready in time. The national debt has grown over the past four years. Recently, economic sentiment has also dampened. The euphoria of the boom that followed Poland joining the EU in 2004 has given way to a feeling that the good times will not continue indefinitely.

Tusk did not win because of his political achievements, but only because Kaczynski has no answers to offer for the crisis that is now beginning. His Law and Justice party has now lost its sixth election in a row, counting local elections.

Ever since his twin brother Lech, who was Poland's president at the time, died in a plane crash in Smolensk, Russia in April 2010, Jaroslaw Kaczynski has been practicing a kind of death cult. He is the high priest of a traditionalist Catholic nationalism, which appeals to about 20-25 percent of voters. But elections are won in Poland, as elsewhere, in the center. Voters in the middle regard Kaczynski's irascible nationalism as anachronistic. That's something that campaign events with the children of PiS deputies could not change. And appearances by Kaczynski's so-called "angels", a troupe of young, pretty women from the PiS, just seemed ridiculous.

Ominous allegations that Kaczynski made about Germany and Angela Merkel in his new book "The Poland of My Dreams" also did nothing to help the PiS. In Poland, even conservatives regard Merkel as being particularly friendly to Poland.

But it's a formula that clearly appeals to a lot of Poles. His new Palikot's Movement party won a surprising 10 percent of the vote.