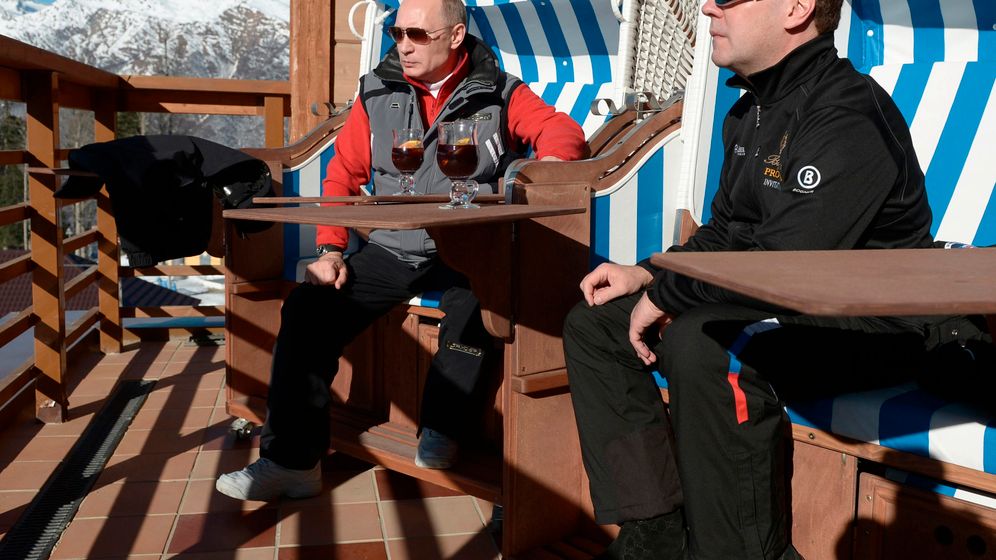 When Alexander Mikhailov speaks about the threat of terrorism at the Winter Olympic Games in Sochi, he comes face to face with his own past. "My comrades are doing everything they can to prevent a tragedy like back then," says Mikhailov, the colonel of an elite unite of Russia's Federal Security Services (FSB). "It would be a catastrophe for our entire country."

Mikhailov wears cowboy boots, jeans and a leather jacket. He's dressed all in black, just as he was on that autumn night eleven and a half years ago, when he commanded a combat patrol during a hostage crisis at a Moscow theater. The operation ended in disaster, when logistical errors resulted in the deaths of more than 130 of the 900 hostages at the hands of Chechen Islamists. "We could have been heroes," says Mikhailov. "Instead we Russians stood there before the whole world as idiots and losers."

Such a thing should never happen again, Mikhailov says, not in Moscow and certainly not at the Winter Olympics, which begin in four weeks. "Sochi is the ultimate goal of the Islamists," fears the colonel. "The terror in Volgograd is probably just the beginning."

Preventing an attack in Sochi is about the safety of athletes and spectators from all over the world. It's also about Putin's pet project, the most expensive Olympic Games of all time -- and thus the reputation of a world power striving for new heights.

Picking Sochi to host the Olympics was a risk from the beginning. For years, tensions have been brewing in the region east of the Black Sea city. Riots continuously erupt between Russians and Caucasians. The federal subjects of Kabardino-Balkaria, Chechnya and Dagestan -- only some 300 kilometers (186 miles) from Sochi -- are active operational zones for Islamist terrorists.

In the past year, 33 attacks shook the North Caucasus. Since October alone, 139 people have been killed by terrorists. Back in September at a meeting of the Security Council of Russia, Putin called for the mobilization of all forces to ensure the safety of the Winter Games.

The Kremlin has deployed 50,000 police, intelligence officers and soldiers. Submarines patrol the Black Sea coast, drones monitor the Olympic host city from the air. Modern S-400 anti-aircraft missile systems have been put in place, capable of shooting hijacked aircraft out of the sky in an emergency.

Units of Interior Ministry troops, who number 170,000 nationwide, are charged with protecting the transport routes, ensuring that elite soldiers can arrive at any potential crisis point within Greater Sochi within minutes.

This is a daunting task. The 400,000-inhabitant city of Sochi stretches along the coast over a length of more than 100 kilometers. The Olympic Stadium, the press center and halls for ice hockey, speed skating and figure skating are located along the shore. A new 71-kilometer-long express train route runs from there through the mountains to one of the two Olympic Villages, ski slopes and luxury hotels -- a nightmare from the perspective of security experts.

A crucial role in the protection of this hard-to-manage terrain falls to the "Spetsnaz" troops, the legendary special forces made up of officers from the Army, the intelligence services and the Interior Ministry. The elite fighters are comparable to the British SAS or the American Navy Seals, who were responsible for tracking down and assassinating Al-Qaida leader Osama Bin Laden in Pakistan.

The most famous Spetsnaz unit, Alexander Mikhailov's "Alpha" group, has already been deployed in Sochi for more than six months. The counter-terrorism specialists scour the city, Olympic Villages and sports facilities for explosives. They also make preparations for emergency operations and hostage rescues. "We've taken security measures here that have only been used before at G-8 summits, when we are charged with protecting Putin, Obama, Merkel and Co.," says one officer.

The Spetsnaz fighters' principle target are Islamist militants from the provinces in the Caucasus. Led by Chechen rebel leader Dokka Umarov, terrorists there want to win independence from Moscow. Umarov's goal is the establishment of an Islamic emirate of North Caucasus, governed by Sharia law. In July he called on his fellow Muslims to hinder the Olympic Games in Sochi, "this devilish dance on the bones of our ancestors," through acts of terrorism.

A Vast Network of Extremists

The Interior Ministry in Moscow estimates there are some 600 underground fighters in the region, organized in some 40 gangs spread throughout the territory of the North Caucasus. In September, the domestic intelligence agency FSB announced that up to 400 additional extremists from the Caucasus are currently in Syria fighting with Islamist groups against President Bashar Assad. The intelligence officers monitor all flights and travel movements to prevent these people from returning home in the coming weeks to launch attacks on the Sochi Olympics.

How exactly the elite soldiers are preparing for the Games is secret. They must adhere to a code of silence. Some were nevertheless willing to speak to SPIEGEL. One of them was deployed to Sochi several weeks ago. He calls himself Victor, asking that his real name not be shown in print. He and his comrades are tasked with preventing terrorists from crossing the mountain passes out of the provinces in order to infiltrate the Olympic games.

Victor's career thus far exemplifies the perseverance of the Spetsnaz. He lost his right eye in a skirmish in the Chechen capital of Grozny in September 2000. Victor, a sniper, asked his commander to be allowed to remain in service. The commander acquiesced.

From then on Victor practiced at the shooting range every day for hours until he regained his former marksmanship. Sometimes he fired off a thousand cartridges per day. "To take care of terrorists, you must never give up," says the officer. He sounds like President Putin, who pithily announced before assuming the presidency in 1999, that he would hunt down terrorists and, if necessary, "waste them in the outhouse."

But despite some successes, Russia has failed to win the fight against terrorism. Since the first major attack in 1995, when Chechen separatists occupied a hospital in the southern Russian province of Budyonnovsk and took patients and doctors hostage, terror attacks have killed 2,240 people nationwide and injured some 5,880.

Just before the New Year, however, FSB chief Alexander Bortnikov boasted with hard numbers. In 70 counter-terrorism operations last year, "more than 260 bandits were neutralized," including 42 from the leadership level of the underground fighters.

"In operations like these, we take no prisoners -- we shoot to kill," says a Spetsnaz officer.

In Makhachkala, the capital of the troubled province of Dagestan -- where most of the terrorists come from -- a Spetsnaz detachment fatally shot militant Murad Kasumov in mid-November. Kasumov was one of three militants suspected in an attack in Volgograd on Oct. 21, in which a suicide bomber from Dagestan blew himself up on a bus, killing seven passengers.

Despite his perceived toughness, many Spetsnaz fighters don't like Putin. Russia's strongman still seems too soft to them -- and much too liberal. "We need someone like Stalin," says Mikhailov, the retired colonel with Spetsnaz's "Alpha" unit.

The majority of the Spetsnaz fighters are nostalgic for the lost Soviet imperium, even if most of them were small children -- if they had been born at all -- when it vanished. They hate America and NATO and don't think much of democracy. As a result, those who are charged with protecting Russians against terrorists and insurgents are skeptical of their own state.

The government, for its part, does little to ensure the loyalty of its elite force. Spetsnaz members are paid the equivalent of between €1,000 and €2,500 per month. Veterans of the elite unit are forced to work for security firms once they leave active service because their tiny pensions aren't enough to live from.

Some former fighters become alcoholics and suffer from depression. At one meeting that was generously lubricated with vodka, a veteran complained: "We are the bloodhounds of the Kremlin. But when we stop functioning, we are thrown away like a used condom."

Andrei Pelikov, former captain of the Spetsnaz unit "Rus," feels similarly. Pelikov was proud of belonging to "Rus." Putin even bestowed him with a medal for courage after he lost his left foot to a land mine while pursuing fleeing rebels in Chechnya in March 2006. Pelikov injected himself with painkillers and wrapped up his leg before leading his unit's retreat and organizing a mine sweeping team. He then lost consciousness. Later it turned out that the minefield had actually been laid by a Russian helicopter.

But after he recovered, he was only allotted a six-square-meter (65-square-foot) room in the dilapidated living quarters of a military barracks for himself, his wife and his son. "You are at the very end of a waiting list for your own place," the commander told him.

Pelikov lost his lower leg for the Fatherland and now he was being humiliated by that same state. In order to prevent any problems of loyalty, Putin placed security for the Winter Olympics in the hands of a man that many in Moscow reverently call "the president's shadow:" General Viktor Zolotov. As head of the Presidential Security Service, he has hardly left Putin's side in recent years.

In July, Putin sent him to the Interior Ministry and put him in charge of providing security for Sochi. His first step was to optimize the organization of Spetsnaz units and to increase salaries.

But the short-term personnel changes did little to help solve long-standing problems or to reduce the hate between Russians and non-Russians in the regions near Sochi. There is no Spetsnaz commander with more to say on that subject than Sergey Illarionov. The 38-year-old lives in a tiny brick house on the outskirts of the southern Russian city of Novocherkassk.

Five years ago, Illarionov was fighting against extremists in the Caucasus, now he receives a pension of just 5,500 rubles (€125, $170) per month. He works as a bodyguard to earn enough to support his wife and his two-year-old son. He still has the look of a body builder.

Illarionov was a major in the elite unit "Rossich," and his Spetsnaz comrades respect him first and foremost due to his role during the battle for the Chechen town of Komsomolskoye in March of 2000. A rebel leader had holed up there along with hundreds of fighters. A Spetsnaz unit stumbled into an ambush and 22 soldiers died within the space of just two minutes.

Illarionov volunteered to negotiate the return of the fighters' bodies with the rebels. One furious Chechen shoved the barrel of his pistol into Illarionov's mouth, but because he showed no fear, he was allowed to live and to take the bodies of his dead comrades. He removed the helmet of a friend of his who had been shot. "His skull fell apart and his brain flowed out onto my hand," he says.

Nevertheless, Illarionov speaks with respect of the people in the Caucasus, due to their courageousness. And the veteran is aggrieved by the tensions between them and the Russians. Just 30 kilometers from his apartment, in a village called Axai, a massive brawl recently took place between Russians and Dagestanis.

"You Russian pigs," the Caucasian immigrants chanted while the Russians told the men from Dagestan to go back where they came from. "That too weighs on the Sochi games," says Illarionov. "Hate is the breeding ground for new terrorists."