"He wants to drag me through the mud," fumed Italian Prime Minister Silvio Berlusconi, referring to his Economy and Finance Minister, Giulio Tremonti. If it weren't for this "storm" on the financial markets, he would have fired him long ago, Berlusconi added. "The sooner he leaves, the better!"

A chorus of cabinet ministers loyal to Berlusconi has chimed in to rail against Tremonti, saying it's impossible to work with him. "He wants to get rid of me?" Tremonti shot back. "Well let him chase me off, see if he manages that!"

Italian newspapers have been giving blow-by-blow coverage of the war raging between the two political heavyweights for weeks, during which time the prime minister and his finance minister have only been talking about -- not to -- each other. Two versions of the urgently needed growth and reform program are being drafted: one in Berlusconi's Chigi Palace, the other in Tremonti's ministry. They aren't coordinating their work. Neither side knows what the other is up to.

This Roman operetta wouldn't warrant much attention it weren't so potentially damaging. But much is at stake, not just for Italy, but for all of Europe. Italy's debt problems have given the crisis a potentially disastrous new dimension. The country has a gigantic debt burden and its economy is shrinking. The government needs to walk a tightrope between imposing radical savings and boosting economic growth. It if slips up, Italy will suffer a fiasco and pull the rest of Europe down with it. But Berlusconi has chosen this, of all times, to wage a bitter campaign against his finance minister. He is exacerbating the crisis.

Last weekend the long-simmering dispute escalated. Tremonti was attending top-level meetings of the International Monetary Fund and G20 in Washington where officials were looking for ways out of the global financial crisis. But while he was deep in discussion about bailout funds for banks and high-debt nations, his boss back in Rome was lambasting him as "immoral" and "unworthy." Instead of parlaying in Washington, Berlusconi seethed, Tremonti should have been in parliament in Rome helping to rescue "his friend."

Tremonti Not Backing Down

Last Friday, the parliament voted on whether an MP, Marco Milanese, a member of Berlusconi's People of Freedom party and a close aide of Tremonti until a few weeks ago, should have his immunity lifted to allow his arrest on corruption charges. In most other European parliaments, a lawmaker accused of such serious crimes would pre-empt an immunity vote and hand himself over. In Rome it was different, as is so often the case. The request by Naples magistrates was rejected by a majority of seven votes.

What, "just seven votes?" roared an outraged Berlusconi, and was quick to find the culprit for the narrow outcome.

"This time he's got no excuses," Italian media cited an irate Berlusconi as telling confidants. "We're here to work and he didn't even see fit to show up. How can he remain in his job?" As if that weren't enough, Berlusconi went on ranting, Tremonti had been going around telling people that he had spent three years trying to gain this government some credibility and Berlusconi had ruined its reputation in just three weeks. A monstrous accusation, Berlusconi bristled, and another reason why Tremonti should be chased out of office. If it weren't for all the trouble with the financial markets, he would have long since told him to resign, said Berlusconi.

But Tremonti isn't the type to back down quietly. The law professor was one of Italy's most successful tax lawyers. He has been a member of Berlusconi's party since 1994 and already served as economy and finance minister in the prime minister's first cabinet. Former British Tony Blair once feted him as the "best-educated economy minister in Europe."

His friendship with Umberto Bossi, the chairman of the right-wing Northern League, is one important tool in his political survival kit. It was Tremonti who mended a rift between Bossi and Berlusconi in 2000 and created the foundation for the current ruling coalition.

'If I Fall, Italy Will Fall'

But above all, financial markets see Tremonti as a guarantor of Italy's reform program. "If I fall, Italy will fall and the euro will fall," he declared months ago, brimming with self-confidence. That may be exaggerated, but financial markets would indeed be in turmoil if he were to be kicked out. The yields on Italian bonds would surge, worsening the debt burden weighing on Italy's finances. In a worst-case scenario, the euro zone's third-largest economy could tip into a downward spiral -- just like Greece.

Italian President Giorgio Napolitano is so worried about dramatic consequences that he sent out emissaries to persuade Berlusconi and Tremonti to bury the hatchet. The country can't afford such quarrelling, said the 86-year-old Socialist, whose words carry weight across the political spectrum.

Meanwhile the populist Northern League chairman Bossi spent two hours on Monday talking to Tremonti about how the government can carry on in its current makeup. Anything else, Bossi warned, would divide the government majority in parliament and hurt Italy's reputation in Brussels and in the financial markets.

Bossi has also been trying to make this clear to his pal Berlusconi. The combined pressure of the Northern League chairman and President Napolitano seemed to show initial results on Tuesday, when Tremonti met Berlusconi at lunchtime in his Rome apartment. The economy minister left quietly some two hours later with a serious expression on his face. While few believe this could be a sign of a return to peace, hope remains that the conflict will escalate no further.

Because Berlusconi has reportedly already convinced the majority of his cabinet to reject Tremonti's economic reforms. He is also said to have spoken with potential successors, including Vittorio Grilli, the finance ministry's general director. Grilli, who is Tremonti's most important colleague, respectfully declined. 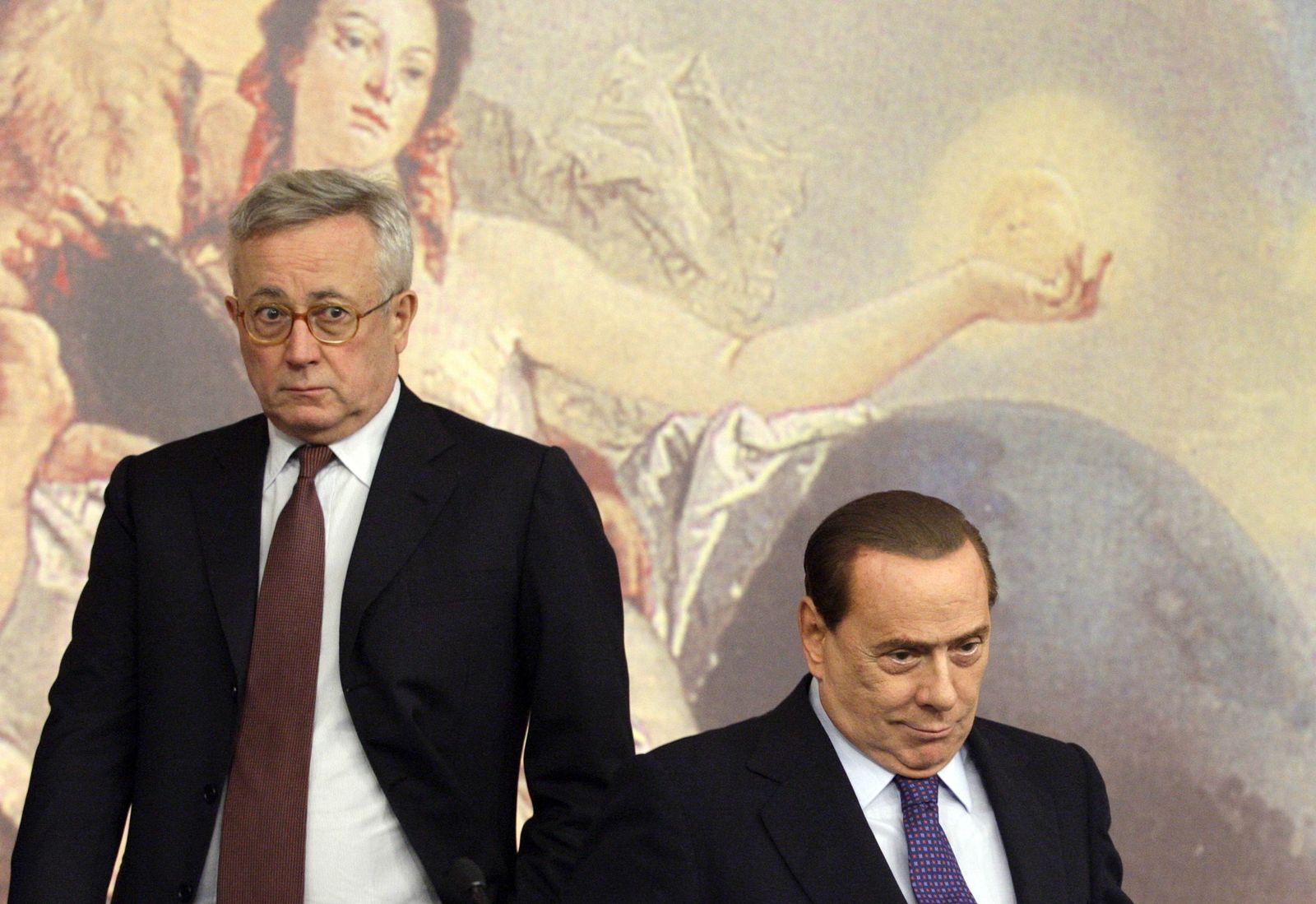 Not the best of friends: Italian Finance and Economy Minister Giulio Tremonti (L) at a news conference with Prime Minister Silvio Berlusconi in August.