He did it. Within two days, Giorgio Napolitano, Italy's 87-year-old savior who was elected president on Saturday, laid the foundation for a new government through talks with representatives of the main parties. It is something the party leaders themselves couldn't manage to do in eight weeks.

As a result, the center-left Social Democrats (PD), together with Silvio Berlusconi's center-right People of Freedom (PDL) party, and the group around centrist incumbent Prime Minister Mario Monti, will form a broad coalition government under the leadership of the former Christian Democrat and current PD deputy leader Enrico Letta.

The new government is to be sworn in on Thursday. The following day -- or no later than next Monday -- the Italian parliament is expected to put the new leadership in Rome up for a vote of confidence that it is likely to pass.

For a while, the aging President Napolitano flirted with an almost "revolutionary" solution: the nomination of the 38-year-old mayor of Florence, the young star of Italian politics, Matteo Renzi. He regularly takes aim not only at his political opponents -- especially Silvio Berlusconi -- but also at his own supporters.

Renzi gleefully stirs up public acrimony against "people who sit in parliament for 25 to 30 years." They "cannot decide our future," he says, calling for new faces in Italian politics and suggesting that the '68 generation be vacated "to the archive." With such statements, Renzi has quickly become the most popular politician in the country -- but he's also become correspondingly unpopular among his colleagues.

The Rising Star Has Too Many Enemies

While Napolitano was still considering whether Renzi could effectively run a government in such difficult times and hold his own with heads of state from Berlin, London and Paris, Silvio Berlusconi was giving the thumb's down.

Berlusconi made it clear he had nothing to say against Letta, but that he had serious reservations about Renzi, adding that the Florentine mayor "wouldn't even get voted in by his own party." That was that. Renzi took it in stride. A "veto by Berlusconi," he said, is actually a "good sign for the future."

Napolitano, however, had to look once more to the past. So he went for a well-known and experienced candidate and nominated Letta. Not a bad choice, but clearly a man who is part of the very caste of politicians that the people would rather see cast into utter exile. Letta is 46, so at least on paper he's young. But he acts -- and looks -- as if he has 100 years of party politics under his belt.

At 31, Letta became deputy leader of the Partito Popolare Italiano (PPI), one of the successor organizations of Democrats Italiana (DC), the long-time ruling party that sunk into a swamp of corruption. When many ex-communists and socialists from from DC came together in the center-left Ulivo (olive tree) party, Letta was elected first to the European Parliament and then to the Italian parliament and ultimately became a high-ranking ministry official under Prime Minister Romano Prodi. He replaced his uncle Gianni Letta, who held the post under Prodi's predecessor, Silvio Berlusconi.

In 2007, the Ulivo party became the Democratic Party, and once more, Letta was in the middle of the action. But when he set out to become party leader, everything went thoroughly wrong. When it came time to tally the ballots -- which were filled out not only by party members but by all interested citizens -- he ended up with just 11 percent, putting him in third and last place. His victorious rival Walter Veltroni received about 75 percent of the vote.

By the time he was nominated on Wednesday for Rome's top political office, he had more or less put his career in party politics behind him.

The Government Must Save -- and Pump Money into Economy

Now it is up to Letta to prove that the old guard of Italian politics can actually get the job done under his leadership -- and that it is capable of doing more than just quarrelling. The next government, after all, faces huge challenges.

These are the kind of difficult, nagging issues that, in fact, can only be tackled by a multi-party coalition that enjoys a broad majority. To create the basis for that, Napolitano was firm with the parties' representatives, arguing it was "unforgivable" that they haven't yet implemented needed reforms. It's time to put an end to "empty words," he said; the country requires actions. Napolitano then added that if party representatives continue to shirk their responsibility, he will step down. Representatives of the right and the left then pledged their full support.

In practice, though, that's going to be difficult -- particularly for Letta's Democratic Party. Over the weekend, party boss Pier Luigi Bersani announced his resignation in tears after his own rank and file refused to back two candidates he supported for the presidency. Now the Democratic Party could be facing a split. And this "anarchy," as Bersani called it, in the party leadership and administration is just the beginning. The situation could get much worse.

The reason is that for most Democratic Party voters, and even more so for party members, the idea of forming a government with Berlusconi, even in a state of emergency, is unfathomable. This, after all, is the media impresario who demonized them as godless communists on his TV stations, the man who has been tried in court multiple times, the man who custom-tailored legislation during his time as the country's leader to suit himself. This is the person who disparaged the Italian justice system as "mafia" and the same billionaire leader who awarded amnesty for tax evasion and illicit construction -- the very man who in his two decades of media and political omnipresence nearly drove the nation into the abyss.

Across the country, young members of the Democratic Party have already occupied local party offices out of protest. They've adopted "Never with Berlusconi" as their slogan. Pollsters are already predicting a dramatic erosion of party support for the Democratic Party if it enters into a coalition government with Il Cavaliere. 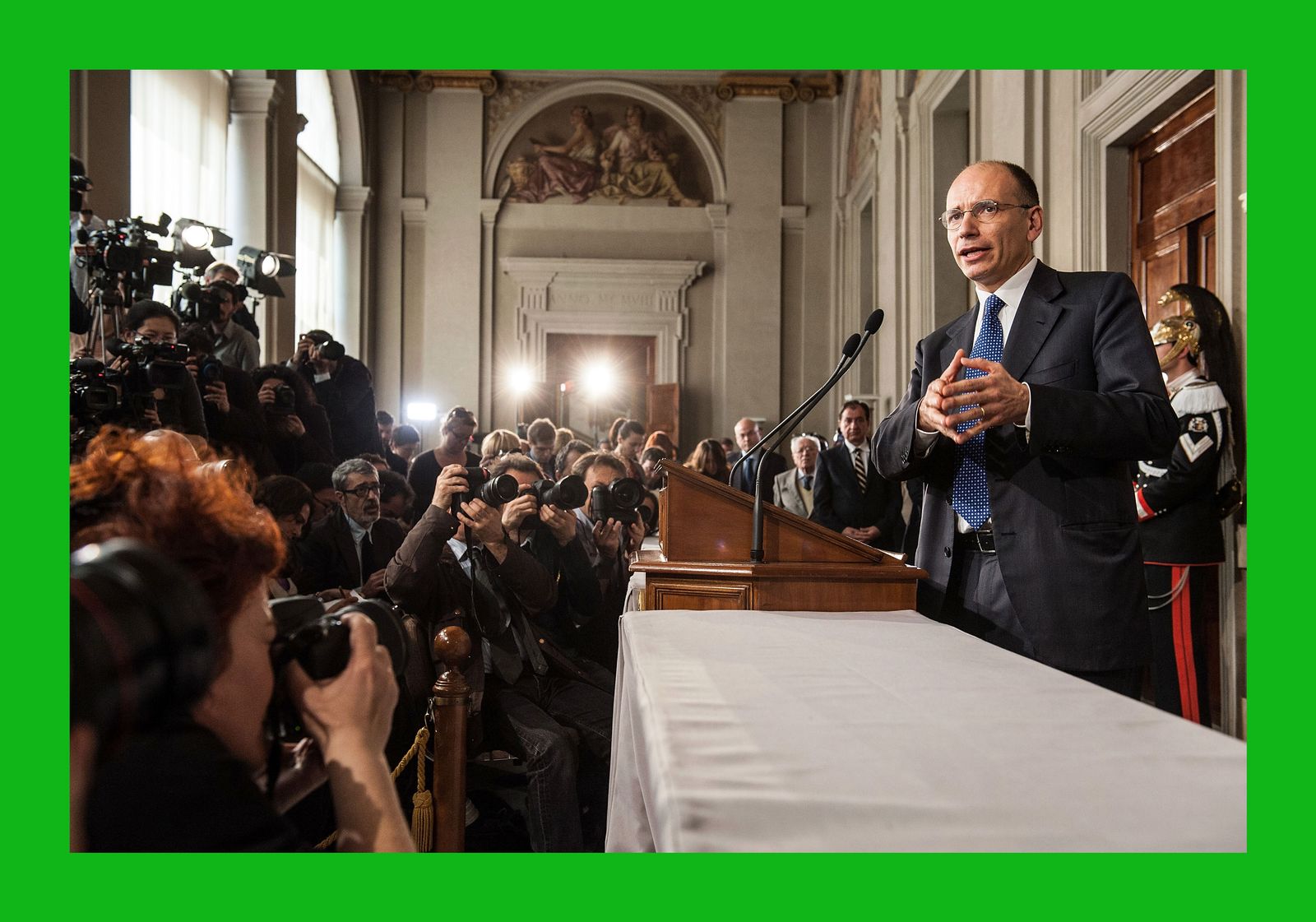 Enrico Letta addresses the press in Rome on April 24 after being tasked with forming a new Italian government.