Once again, images of violence in Istanbul have been broadcast to living rooms across Europe. They showed Turkish police advancing on Taksim Square during the night with bulldozers and water cannons. For hours, officers in riot gear engaged in street fighting with protesters. On Wednesday morning, the remnants of those clashes could be seen on the cleared square.

The drastic measures taken by the government of Prime Minister Recep Tayyip Erdogan have created a dilemma for Turkey's partners in the European Union. Since the escalation of the civil protests at Gezi Park at the end of May, the Europeans have been helplessly observing as events unfold. Besides an appeal or warning here and there, so far there has been no substantial reaction from Brussels, Berlin, Paris or London.

They are worried that the violent excesses in Turkey could destroy progress made in recent months. After years of stalling, diplomats had worked painstakingly to get talks over Turkey's future European Union accession back on track. On June 26, EU foreign ministers had hoped to open a new chapter in accession talks with Turkey for the first time in three years. It would be the 19th of 35 chapters that must be completed before Ankara can join the European club.

The massive police deployment is being monitored very closely in EU capitals, including Berlin. German Foreign Minister Guido Westerwelle described the images from Istanbul as "unsettling." He also urged Erdogan to de-escalate the situation "in the spirit of European values" and seek a "constructive exchange and peaceful dialogue." Until now, Westerwelle's position had been to open a new chapter in EU negotiations with Turkey as soon as possible. In May, he had said that a "new impetus" was needed and offered the prospect of fresh talks in the near future. 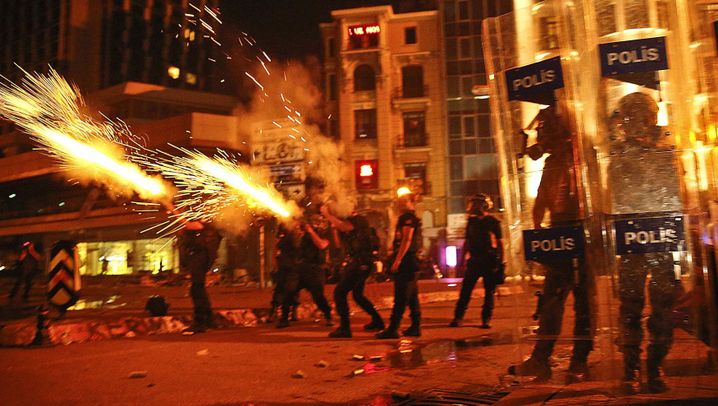 But the prevailing mood in Berlin at the moment is reserved, and the television images have raised questions about whether things can move forward. "In light of the many open questions, there are considerable doubts over whether it will soon be possible to open another accession chapter," a source at the German Foreign Ministry told SPIEGEL ONLINE. The source also explicitly stated that this "probably won't be possible." The words serve as a clear warning to the government in Ankara from the Foreign Ministry.

In member countries' parliaments and the European Parliament, the chorus of voices demanding that accession talks be suspended is growing. A decision by the foreign ministers to open a chapter on regional policies on June 26 could even be delayed, EU sources in Brussels said, expressing their disappointment. Turkey has been engaged in accession negotiations with the EU since 2005, but so far only one chapter has been closed -- that of science and research.

Over the weekend, EU foreign policy chief Catherine Ashton warned there is a connection between how members of the opposition are treated in Turkey and the country's accession negotiations. And, last Thursday and Friday, EU Enlargement Commissioner Stefan Füle traveled to Turkey to get an overview of the situation himself. He visited protesters at night at Taksim Square and left with the impression that normal people were peacefully exercising their freedom of assembly. In a public speech given in Erdogan's presence the next day, he said those responsible for the violence should be held accountable. The Turkish prime minister responded by saying it was he who would decide what was in Turkey's best interests.

For the EU, the situation presents a difficult balancing act. On the one hand, officials don't want to watch silently as violence is inflicted upon peaceful protesters. All the same, they don't want to lose Ergodan as a partner. "There have been many reforms recently in Turkey," European Commission sources say. "It wouldn't be good to discontinue negotiations." The hope in Brussels is that Erdogan will start a face-saving retreat in the coming days. The fact that he plans to meet with protest leaders on Wednesday is already being perceived as a positive sign.

In Germany, Frank-Walter Steinmeier, the parliamentary leader of the opposition center-left Social Democratic Party, holds a similar view. He argued in an interview with the newsweekly Focus that accession negotiations should not be linked to daily politics, but the big picture.

But Erdogan is putting his partners to the test. The British government, traditionally the most outspoken supporter of Turkish EU membership, is very concerned that he may create irreparable damage. "The more Erdogan acts like a Putin light, the more difficult it will be to promote EU membership for Turkey," said Charles Grant, director of the Center for European Reform, a London-based think tank.

Grant points out that Turkey's EU partners also have no real means with which to pressure Erdogan to reason, however. "The threat to suspend membership talks is an empty threat," Grant said. "Erdogan won't mind. He has other priorities."