A contingent of astronauts and instructors from the Paris-headquartered European Space Agency (ESA) recently found themselves attempting to navigate an alien frontier: the Beijing training base for taikonauts, China's new space explorers.

Joining the week-long visit in January to the Astronaut Center of China were representatives of ESA's Human Spaceflight Directorate, along with a young European astronaut who is studying Chinese. Just weeks earlier, a group of Chinese taikonauts had visited the European Astronaut Center in Cologne.

Some ESA higher-ups have been pushing for strengthened spaceflight ties with China, which launched its first manned capsule into orbit a decade ago. The January gathering in Beijing was just the latest in a whirlwind of high-level exchanges aimed at mulling and perhaps shaping a new European-Chinese space alliance.

Last spring, after viewing the liftoff of an Ariane rocket bound for the International Space Station (ISS), one director of the Chinese space agency urged speeding up joint space endeavors. But the heads of its ever-expanding program have yet to issue a formal invitation for a European astronaut to join the crew on a mission using China's Shenzhou spacecraft.

In Europe, Thomas Reiter, the former space station astronaut who now leads ESA's Human Spaceflight Directorate, is spearheading the drive to forge closer ties with China. In early 2012, Reiter told SPIEGEL: "Our goal is that, within the current decade, a Chinese spaceship will dock at the International Space Station or a European spaceship will dock at the Chinese space station."

But several obstacles stand in the way of Reiter's goals of European-Chinese space collaboration.

The US has also been bombarded with a barrage of cyberattacks from China. With military-like precision, hackers have hit an array of American targets, including the email accounts of members of the US House of Representatives, Google's central servers, NASA's high-security database and major newspapers, including the New York Times and the Wall Street Journal.

Chinese membership in the space station, says Moltz, "would require US consent, and it seems very unlikely to be forthcoming before at least 2020."

But even in the face of American opposition, at least technically, any ISS partner could use its allocation of astronaut slots to invite a single Chinese taikonaut, rather than an entire Shenzhou spacecraft, to visit the station. Russia might do this, Moltz predicts, "in order to make a political statement."

Efforts to get the Chinese to the globe-orbiting station could echo 1975's Apollo-Soyuz Test Project, when Cold War combatants Washington and Moscow crafted their first link-up in space. The event heralded the end of a nearly two-decade long space race between the two superpowers and ultimately paved the way for their joint construction of the ISS.

Reliance on Russia and China

Meanwhile, in its 2011 report, NASA's Aerospace Safety Advisory Panel (ASAP) warned that "there is a greater-than-30-percent chance that the ISS could sustain a (loss of mission) sometime during its projected operating life." Since August 2011, when the US mothballed its aging Space Shuttle fleet, NASA has relied solely on Roscosmos, its Russian counterpart, to transport American astronauts to the ISS. But a series of failures over the past two years has raised doubts about the reliability of the Russian launchers.

In December 2012, Scott Pace, the director of the Space Policy Institute at George Washington University, cited the report when speaking before Congress on NASA's strategic direction. Pace testified that ASAP "believes that continued reliance on a single, foreign (launch) system could result in the temporary or permanent abandonment of ISS prior to its end-of-life, resulting in an unplanned, potentially uncontrolled deorbit significantly earlier than the 2020s."

In other words, following a worst-case chain reaction of missteps -- including, for example, a life-threatening accident, emergency evacuation and then failure to be able to rocket a rescue team up in time to save the station -- the ISS could plunge back to Earth like a giant missile.

To prevent such a catastrophe, scientists at the Paris-based International Academy of Astronautics (IAA) are urging ISS partners to approve contingency plans guaranteeing that there are at least two alternative launch systems available for getting humans to the ISS. Since Russia and China are now the only powers in a position to get astronauts into space, the group recommends that Beijing's Shenzhou spacecraft be retrofitted with American or European docking equipment for future ISS missions.

In its 2010 report entitled "Future Human Spaceflight: The Need for International Cooperation," the academy also called on Europe to develop a spacecraft capable of taking humans into orbit and beyond, and recommended "reciprocal access to the ISS and Chinese space stations for international cooperation."

Internally, "ESA has been discussing ... with its partners whether and how the ATV could become human-rated," and its possible role in averting an accidental destruction of the ISS, says IAA member and Italian rocket designer Claudio Bruno.

But Pace, who co-edited the report, cautioned that proposed Shenzhou missions to the ISS, jointly piloted by Chinese and American astronauts, would depend on improved political ties between the rival superpowers.

A Change in Space Leadership

While the heads of China's space program are screening elite cadets to deploy on a new mission to the Sky Palace-1 orbital spacelab in June, they are also finalizing plans to land a robotic explorer on the moon as well as to test a new Long March 5 rocket designed to transport the first taikonauts to the lunar surface.

"China is on track to become the world's leading space-faring nation," says Michael Griffin, who headed NASA between 2005 and 2009. "They have some ground to make up, but today are in the No. 2 position, behind Russia, in the only metric that really counts: the capacity to conduct an independent human spaceflight program."

China's steady advances in sophisticated rocketry and human spaceflight have coincided with a series of retreats by NASA over the past four years.

Griffin, a physicist and aerospace engineer by training, is widely regarded within the American space community as one of the agency's greatest leaders. This is primarily attributed to his former role as the chief architect of blueprints to create a human settlement on the moon starting in the 2020s.

These ambitious plans envisioned a powerful Ares V rocket, Orion capsule and Altair lunar lander to get Americans back on the moon, where they could establish a permanent human outpost. But the White House terminated the so-called Constellation program in 2010, roughly a year after Griffin had left NASA, citing budgetary reasons. Although Congress rallied to save the Orion spacecraft and to order the development of an alternative booster, America's entire human spaceflight program is severely underfunded and lacks an overarching vision.

As a result, says Griffin, the US hasn't just lost its ability to launch astronauts into space for the time being. It has also ceded its long-standing position as the world's leader in manned spaceflight to Russia and China.

With Beijing's space advances and NASA's retrenchments, Griffin adds that, if it wanted to, "China could take the lead in developing a lunar base in the 2020s."

Within NASA, Griffin was also an early backer of proposals to send human explorers to Mars, which could even be inhabitable. But NASA's current disarray is making the prospect of seeing American astronauts land on the red planet seem ever more remote.

In contrast, two years ago, ESA joined forces with the Astronaut Center of China and Russia's Federal Space Agency to launch Mars500, a simulated mission that lasted 520 days and included a 30-day sortie on a virtual Martian surface.

The simulation tested the ability of a crew of six -- three Russian cosmonauts, two European astronauts and one Chinese taikonaut -- to withstand a long-duration flight with only sporadic radio contact with Earth and together complete a joint mission.

The Mars500 experiment "will for sure help us in defining the best conditions for a successful human mission to Mars," says Jennifer Ngo-Anh, who headed the project and is based at the European Space Research and Technology Center in the coastal Dutch town of Noordwijk.

Ngo-Anh says that selecting a Mars500 crewmember from the Astronaut Center of China signaled that the ESA "is very keen on collaborating with our Chinese colleagues."

This collaboration and desire for more raises one question: If Washington continues to resist spaceflight cooperation with Beijing, could Europe, Russia and China instead agree on their own joint mission to Mars with a mixed crew such as the one used in the Mars500 simulation?

"Without question, Russia, China and ESA could … begin work on a joint program to mount the first expedition to Mars," says Griffin, who now sits on the board of Stratolaunch Systems, an Alabama-based start-up launched by Microsoft co-founder Paul Allen that aims to revolutionize space transportation.

"It will take awhile to develop and execute such a mission no matter who does it, but the overall technical capability of these societies, especially Europe, is such that they can easily do it if they want to," Griffin says. "The question is one of societal will and commitment, not one of basic technical feasibility." 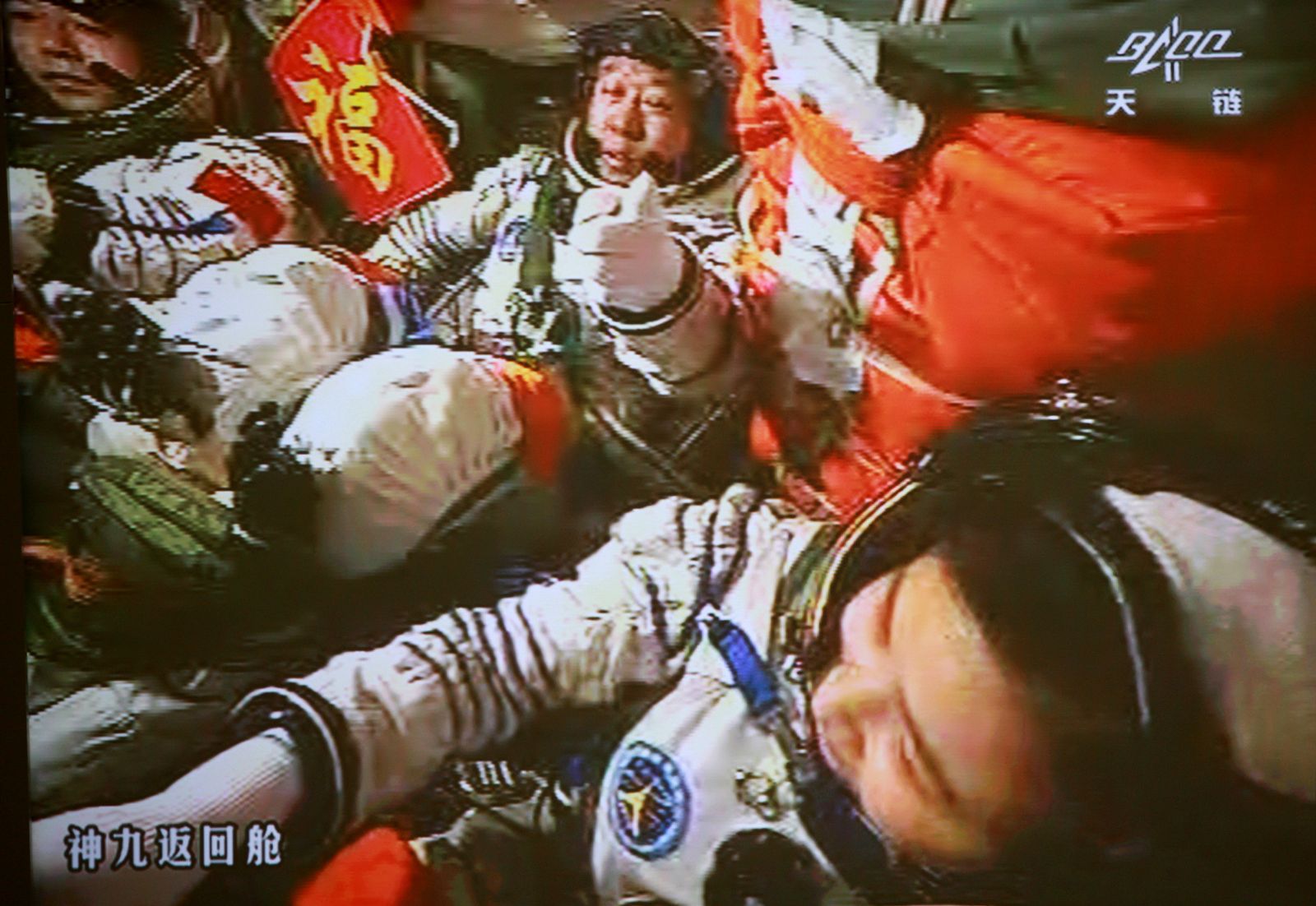 Partner or rival for Europe? Chinese astronauts can be seen as their Shenzhou-9 manned spacecraft docks with the Tiangong-1 space lab in June.