Jouma al-Badi thought he was safe when he first set foot on European soil on April 28. Together with 21 other refugees, he had been taken in a rubber dinghy from Turkey to the Greek island of Samos. The young Syrian planned to apply for political asylum. He documented his arrival in videos. Local residents also remember the refugees.

Greek security forces captured the migrants. Under international law, it is their duty to give the new arrivals a hearing and field their applications for asylum. Instead, according to al-Badi, the officers dragged them back out to sea and released them on an inflatable rubber raft. Videos obtained by DER SPIEGEL also show him on the raft.

For an entire night and a morning, Greek border guards kept pushing the men and women away as their raft floated around in circles. The Turkish coast guard filmed the maneuver.

The waves struck the Syrian in the face. He eventually ran out of strength and thought he was going to die.

An aircraft used by the European border protection agency Frontex also passed over the refugees. The crew of the surveillance plane, with the registration identifier "G-WKTH,” were part of a European Union operation in Greece. The plane twice flew over the Strait of Mykali, where al-Badi and the other migrants were located. According to flight data that has been viewed by DER SPIEGEL, the first flight happened at 2:41 a.m. and the second at 3:18 a.m.

The plane’s crew has a standard MX-15 camera on board with an infrared sensor and a sensor for poor lighting conditions. Even at night, the sensors are capable of detecting small objects on the water. According to a Frontex promotional video, the camera images are streamed live to Frontex headquarters in Warsaw, Poland. But Frontex didn’t send any help.

The waves struck the Syrian in the face. He eventually ran out of strength and thought he was going to die.

The Greek government denies it conducted pushbacks of refugees to Turkey, even though DER SPIEGEL and other media have fully documented several of these operations, known as pushbacks. Greek border guards are growing increasingly ruthless. As in the case of al-Badi, they are now pushing even refugees who have reached the Greek isles back to sea in operations that are illegal under international law.

Frontex officials have publicly claimed that they know nothing about pushbacks by Greek border guards. The agency has 600 employees deployed in Greece as well as ships, drones and aircraft.

Breaking the law has become an everyday occurrence at Europe's borders.

Together with Lighthouse Reports, Bellingcat, "Report Mainz” -- a program on ARD, the German public broadcaster -- and Japanese broadcaster TV Asahi, DER SPIEGEL spent several months reporting in the Aegean Sea region. The reporters tracked the positions of Frontex units and compared them with position data from pushbacks recorded by NGOs and migrants. They interviewed witnesses, refugees and Frontex staff. They viewed internal documents and dozens of videos and satellite photos.

Their research proves for the first time that Frontex officials know about the Greek border guards’ illegal practices – and that the agency itself is at times involved in the pushbacks. Breaking the law has become an everyday occurrence at Europe’s borders, and the EU is allowing it to happen.

Samira Mohammad could already see Lesbos when the men with the masks arrived. The Syrian woman, who does not want to provide her real name, is 45 years old. That morning of August 15, she was sitting in a rubber dinghy with dozens of other people. She recalls how Greek border guards tried in vain to stop the arrivals and how they steered toward the boat repeatedly and pushed it back toward Turkey multiple times. She says the Turkish coast guard held them off. Locals even have a name for the cynical game: "Greek water polo.”

Mohammad claims the Greek officials took their gasoline and destroyed the engine. And that masked Greek border guards then boarded the dinghy. Several refugees claim that they forced the migrants to tie the shaky rubber dinghy to a speedboat at gunpoint. The border guards then towed the boat toward Turkey. Videos corroborate the statements made by the refugees, and the destroyed engine is clearly visible.

Mohammad said she was scared to death during those moments. Her entire family had been onboard, including her pregnant daughter-in-law, who was later hospitalized with severe bleeding.

The maneuver off the coast of Lesbos lasted hours, and the Turkish Navy didn’t rescue the refugees until noon.

"If (Frontex) don’t do that and even make waves instead, only to drive away and let the Greeks do the dirty work, then they are still involved in the illegal pushback.”

A Romanian Frontex boat was also on site that morning. The MAI 1102 was located only a few hundred meters away from the refugee boat. The boat can be clearly identified in a photo. A German navy ship on a NATO mission that observed the incident reported it to the German government. It also stated that Frontex people had been present. This is documented in an internal paper that has been obtained by DER SPIEGEL. Nevertheless, this pushback has never been revealed publicly before now.

On June 8, Frontex officials went one step further, with the MAI 1103, a ship also flying the Romanian flag. It directly blocked a refugee boat. The incident can be seen in several videos recorded by the Turkish coast guard and verified by DER SPIEGEL. It shows officials standing on the deck, where they are obviously communicating with the refugees floating in the water in front of them.

Frontex in the Agean Sea: It has been reported that Europe's border agency has been helping to block refugees rather than helping to rescue them. (Excerpted from a Turkish coast guard video.)

Later, the MAI 1103 passes the refugees traveling at high speed, with waves beating against the boat. The Romanian officials then withdrew and the Greek coast guard took over the operation.

"These pushbacks violate the ban on collective expulsions and international maritime law,” says Dana Schmalz, an expert on international law at the Max Planck Institute in Heidelberg. She notes that if Frontex officials stopped a completely overcrowded inflatable boat, they would be required to rescue the people immediately. "If they don’t do that and even make waves instead, only to drive away and let the Greeks do the dirty work, then they are still involved in the illegal pushback,” she says.

Greek border guards: Locals have a name for the cynical game officials are playing here. They call it "Greek water polo." (Excerpt from a Turkish coast guard video.)

Reporting by DER SPIEGEL and its partners found that a Frontex surveillance plane or Portuguese or Romanian Frontex ships were near at least six pushbacks in the area since April. The number of undetected cases could actually be much higher.

The vast majority of Frontex vessels patrol the Aegean Sea with their AIS transponders switched off or untraceable in order to prevent giving away their positions. Their presence can only be verified with difficulty through videos and photos.

When contacted for comment by DER SPIEGEL, Frontex did not deny the individual incidents, instead stating that the officials protected the fundamental rights of migrants and respected their right to non-refoulement. It further stated that the incidents that had been reported were forwarded to the Greek coast guard, which opened an investigation into the matter. The Greek government gave a blanket denial to the allegations, saying that it complies with the law and does not carry out illegal deportations.

Under Frontex’s statutes, police officers are required to file so-called Serious Incident Reports to document violations of the law. But people familiar with the situation say that fewer and fewer of these reports are getting filed. The sources said the Frontex border guards, who are sent to Greece from all over Europe, frown upon such reports because they cause trouble for the host country.

Interviews with migrants are seemingly also censored. According to documents viewed by DER SPIEGEL, asylum-seekers repeatedly reported pushbacks by Greek security forces to Frontex officials. But Frontex officials avoid the use of the word "pushback” in their reports, instead referring to "returns.” Greek police were also given access to the reports so they could read them.

In an internal letter to a member of the European Parliament that DER SPIEGEL has viewed, Frontex head Fabrice Leggeri admits that his agency recorded a pushback from the air. The people had been placed in a rubber boat and were later rescued by the Turkish coast guard. In this case, too, international law expert Dana Schmalz argues that Frontex should have sent a nearby ship to rescue the refugees.

In the coming years, there are plans to further expand Frontex with more money and staff to support patrols at Europe’s borders. But Frontex’s complicity in crimes being committed in the Aegean Sea raise fresh doubts about whether the authority is suited to the task.

Jouma al-Badi had to endure more than 17 hours of fear after Greek security forces abandoned him on a rubber raft. It was only then that the Turkish coast guard rescued him.

Months later, he finally made it to Greece and from there on to Germany, where he has since applied for asylum protection. He feels safe now, but he is still struggling to come to terms with the night he spent on the raft. Those hours he spent at sea, al-Badi says, were the darkest moments of his life.

Lighthouse Reports and Bellingcat were provided with a grant for their reporting by the Investigative Journalism for Europe program. 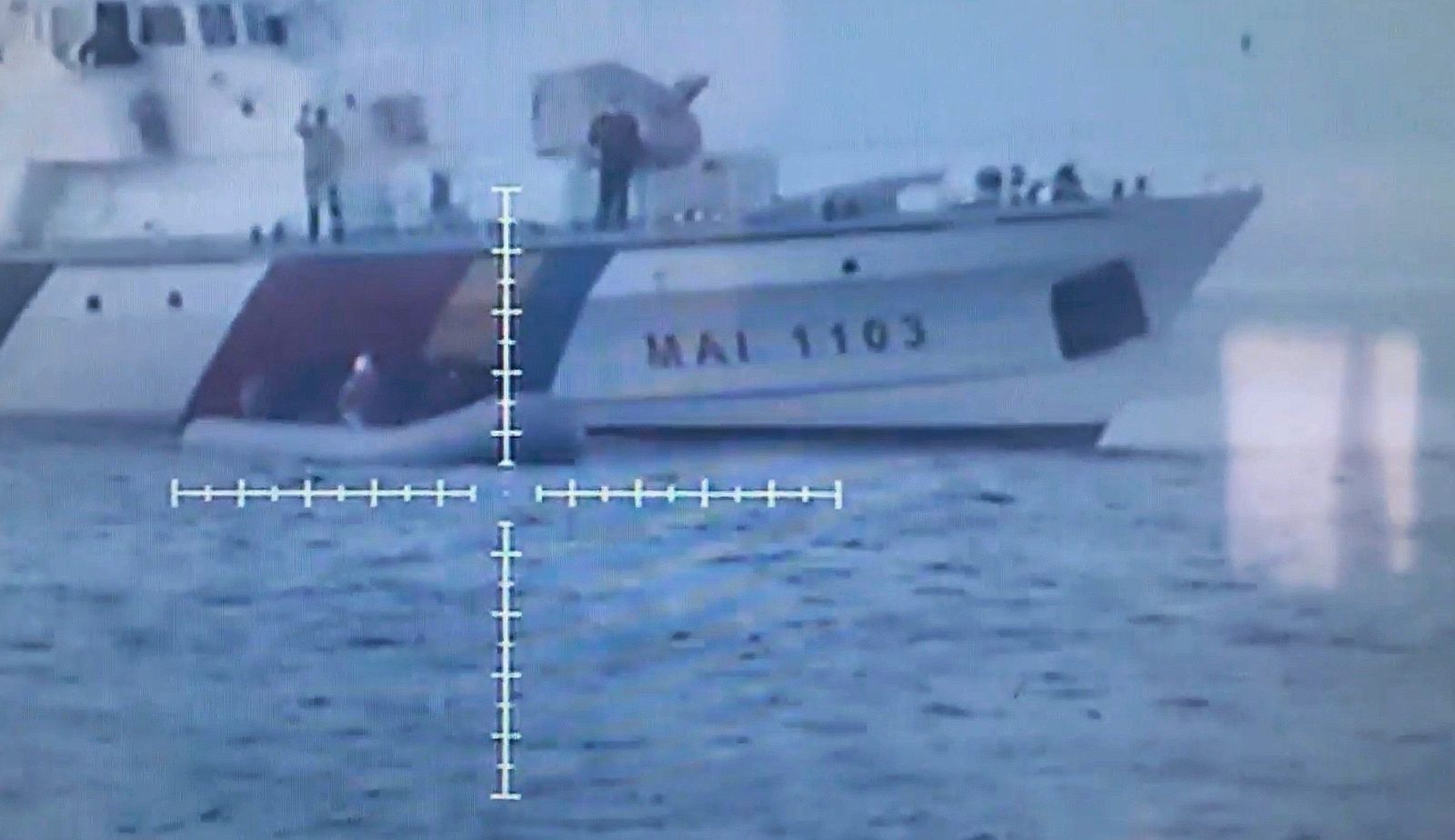 A Frontex ship in the Agean Sea (Excerpt from a Turkish coast guard video.)