Věra Jourová, 55, has already proven how tough she can be. As the European Union’s justice commissioner, she took on America’s tech giants, mostly in an effort to improve data privacy. Now Jourová, who grew up in communist Czechoslovakia, is vice commission president for values and transparency. In 2019, Time magazine selected her as one of the world’s 100 most-influential personalities.

DER SPIEGEL: Madame Vice President, is there a new strategy in the European Union for dealing with member states like Poland and Hungary that are running afoul of the rule of law?

Jourová: I would not say a new strategy, but I would say a new effort to find a way out of the problem. The legal procedures will remain the same - the commission is and will remain the guardian of the treaties. It is our duty to ensure that the member states abide by the law. And it remains our responsibility, right up to the final appeal at the European Court of Justice.

"Perhaps there is also at times a lack of understanding in Brussels for the concerns of Eastern Europe."

DER SPIEGEL: We are asking because Ursula von der Leyen, after her election as president of the European Commission, said that she wanted a fresh start with Eastern Europe.

Jourová: Again, we have a duty to ensure that member states comply with the EU treaties. At the same time, I reject any kind of activism, any kind of barking on Twitter and grand declarations about the end of democracy in Poland. It’s not my style. So, what’s new? I fully agree with Ursula von der Leyen that we cannot afford to have the door closed. The EU needs Poland, and Poland needs Europe. We need to have a fair and civilized dialogue.

DER SPIEGEL: You were just in Warsaw, where the conflict between the government and the remaining independent judges is escalating massively. What is your impression? Do you think the Polish government is even prepared to compromise with the EU?

Jourová: I am realistic. It has taken four years to finally sit at the same table as Justice Minister Zbigniew Ziobro, one of the architects of the judicial reform. I have now spoken with him, which is good, but there haven’t been any positive developments yet. He explained to me why he wants to reform the judiciary, and I explained to him why he is violating EU laws.

DER SPIEGEL: The Polish government, led by the Law and Justice party (PiS), began its "judicial reforms” over four years ago. Is it not too late to save the rule of law in Poland?

Jourová: The so-called reform in Poland is now at a very dangerous moment, because it threatens to become irreversible. It is already affecting all levels of the judiciary. At the moment, close to 400 out of 10,000 judges have been affected. But the situation is far more serious than these figures suggest. The restructuring of the judicial system has been largely completed, especially at the top level, at the Constitutional Court and the presidents of the courts. And it is also in full swing with parts of the Supreme Court. This has an impact on the lower courts, too.

DER SPIEGEL: In a letter you wrote to Polish President Andrzej Duda, you asked him, in a request he ignored, to refrain from signing the next, perhaps decisive stage of judicial reform, in which the government wants to significantly tighten the disciplinary measures available against judges.

Jourová: I already communicated the Commission's concerns about this law to the Polish leaders in December. The new system that the Polish government is building – and part of that is this new law – opens up extremely wide space for disciplinary proceedings and thus jeopardizes the independence of judges. This is no longer a targeted intervention against individual black sheep, of the kind other EU member states are also familiar with, it’s a kind of carpet bombing. This is not reform. This is demolition. That’s why we are keeping all our legal options open and are analyzing the new law in detail right now. A few weeks ago, we also asked the European Court of Justice to impose interim measures to suspend the work of the Polish Disciplinary Chamber, which was established last year.

DER SPIEGEL: Is the PiS government in Warsaw actually aware of the extent to which it is isolating Poland in Europe?

Jourová: Poland is not leaving the EU, this is too strong coffee. But these so-called reforms will have consequences, including ones that few people are thinking about at the moment. Businesses, for example, are urging us not to give in. They want to do business, but for that they need legal certainty and an independent justice system. It’s also not good for Poland to isolate itself further at a time when the balance of power within the EU is shifting. The British are leaving and they were always an important partner to Eastern European countries like Poland.

DER SPIEGEL: You grew up in Czechoslovakia in communist times. What explanation would you give for why Poland, of all countries, would try to torpedo the achievements of its still nascent democracy?

Jourová: I lived for 25 years in a state without an independent judiciary, without freedom of speech or civil society. Was it safe? Yes, it was. But we wanted freedom, we wanted dignity. I believe that this feeling is still there. Perhaps there is also at times a lack of understanding in Brussels for the concerns of Eastern Europe. For us, the EU sometimes feels constrictive, like an overly tight T-shirt. We don’t like this atmosphere where we are expected to imitate the West.

DER SPIEGEL: Bulgarian political scientist Ivan Krăstev blames the refugee crisis for Eastern Europe’s alienation from the EU. Do you agree with him?

Jourová: Yes, that explains a lot. Many citizens feel insecure because of migration or new technologies. This part of society is relieved when they have somebody who is making decisions for them. That’s always the ideal environment for authoritarian men to take control. But this doesn’t apply exclusively to Eastern Europe – look at the yellow vests in France or AfD voters in Germany.

DER SPIEGEL: One of those strong men is Hungarian Prime Minister Viktor Orbán. How does his system of dismantling democracy differ from that of Poland’s PiS?

Jourová: Polish judicial reform is happening with a crowbar. In Hungary, the process is more gradual, but also broader. The media is affected there, too. We have seen a large-scale consolidation of the media in the country, which now write and broadcast things that suit the government.

DER SPIEGEL: In addition, Central European University, which was founded by U.S. billionaire George Soros, who is originally from Hungary, had to move some of its areas of study to Vienna because it was no longer possible to operate in Budapest.

Jourová: We’re not just looking on as Orbán acts: Think of the infringement proceedings in the case of Central European University. Although we see a thought-out judicial reform project with a clear objective in Poland, that is not the case in Hungary. At parliament’s initiative, rule of law proceedings under Article 7 are now underway, and we had our second hearing with Hungary in the European Council only a few weeks ago.

DER SPIEGEL: Can Viktor Orbán’s illiberal democracy still be considered a democracy in the EU sense?

Jourová: If he means by this slogan that a majority can do what it wants, then he is surely wrong. A democracy cannot be a dictatorship of the majority. This context reminds me of a quote from the first president of Czechoslovakia. In 1918, he said: "Democracy needs at least 50 years of undisturbed development.” So, let’s not forget that Poland and Hungary are young, fragile democracies.

DER SPIEGEL: Both countries reject criticism of their so-called reforms as interference in their domestic affairs. But as in Warsaw, there are also complaints in Germany that judges on the Federal Constitutional Court are appointed by politicians.

Jourová: There is no perfect system. We are working on a report, a monitoring, in which we will take a close look at the rule of law in all EU countries. This is to show that the accusation that we are only targeting this or that country is false. We will look at the gaps in each system in terms of the independence of the judiciary, the fight against corruption and freedom of the media.

DER SPIEGEL: Your own country, the Czech Republic, could provide a good case study. The European Commission has found serious conflicts of interest in Prime Minister Andrej Babiš, given that he is not only a politician, but also the owner of one of the biggest companies in his country, with holdings in Germany and elsewhere.

Jourová: There is no systematic attack on the rule of law in the Czech Republic, so the country is not a case for me. I had no involvement in the audit report from the European Commission you are referring to, which has been sent to Prague. The Czech government must now respond to it.

"Polish judicial reform is happening with a crowbar. In Hungary, the process is more gradual, but broader."

DER SPIEGEL: You were the deputy head of Babiš' party and are considered one of the most loyal supporters of the "Czech Trump," as some call your prime minister. How independent can your view of the Czech Republic really be?

Jourová: These colorful comparisons are exaggerated. Andrej Babiš respects the fact that my new job also involves setting new boundaries. It may surprise you, but I sometimes even take the liberty of criticizing him in public. He has the image of being a man who can’t handle criticism. But the reality is that he wants to be surrounded by people, including women, who have strong opinions.

DER SPIEGEL: Regardless whether it is Poland, Hungary or the Czech Republic, there is no place where the application of instruments like Article 7 proceedings have really improved the situation. That’s why EU countries like Germany are pushing for a simple rule: Countries that don’t adhere to the principles of the rule of law should get fewer EU subsidies.

Jourová: We’re talking about different goals. With Article 7, the Commission examines whether the rule of law is being breached systematically in an EU member state. In terms of the budget, we want to ensure that we give subsidies only to those countries where you can call on an independent court if there are any doubts that the money is being spent properly. That’s only fair – also to the citizens of the net payer countries like Germany (who pay more into the EU than they get back in subsidies). The best thing would be for Poland and Hungary, like the vast majority of EU members, to participate in the new European Public Prosecutor’s Office, which will monitor the use of EU funds everywhere. Then the calls for the rule of law mechanism would likely be less strong. 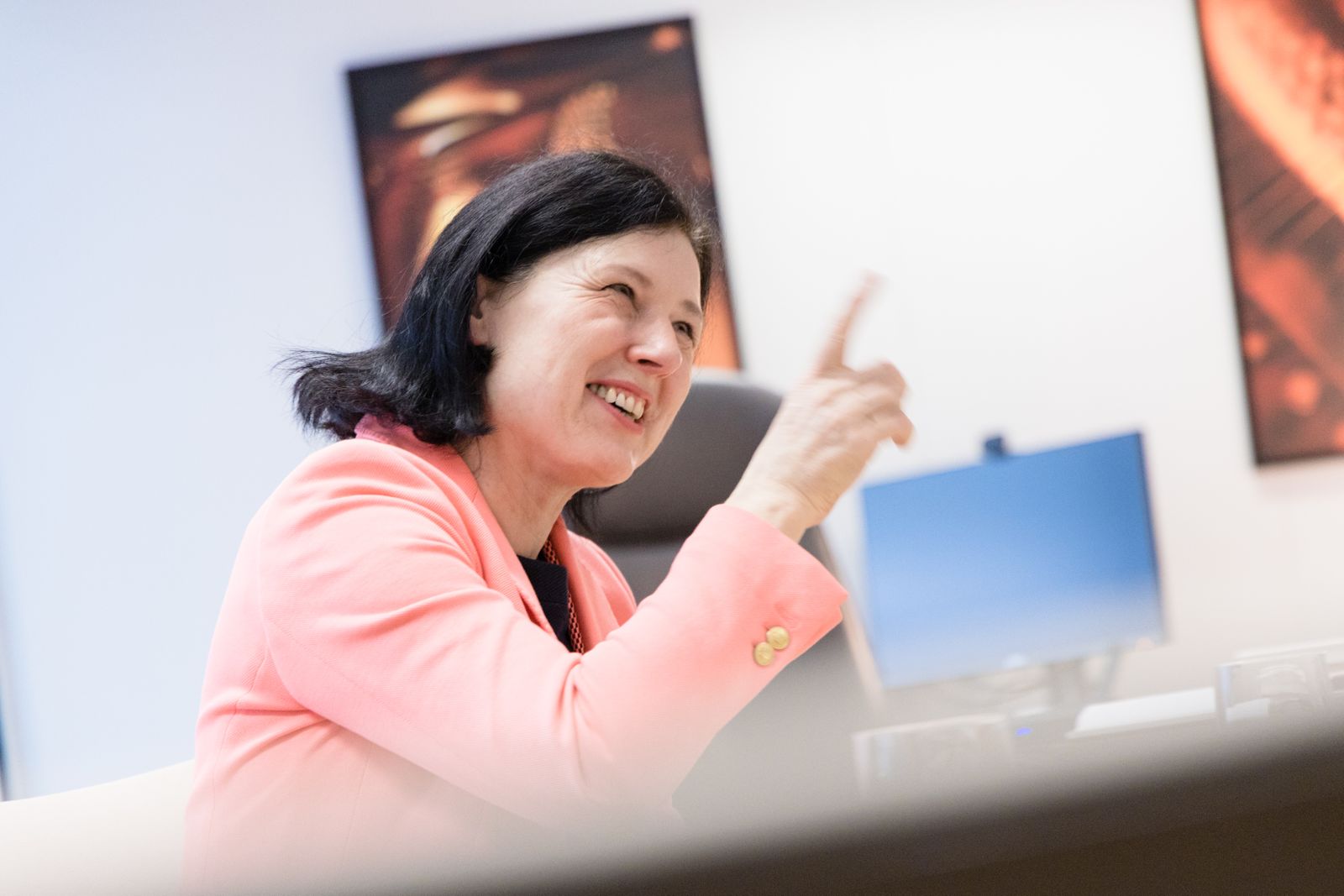 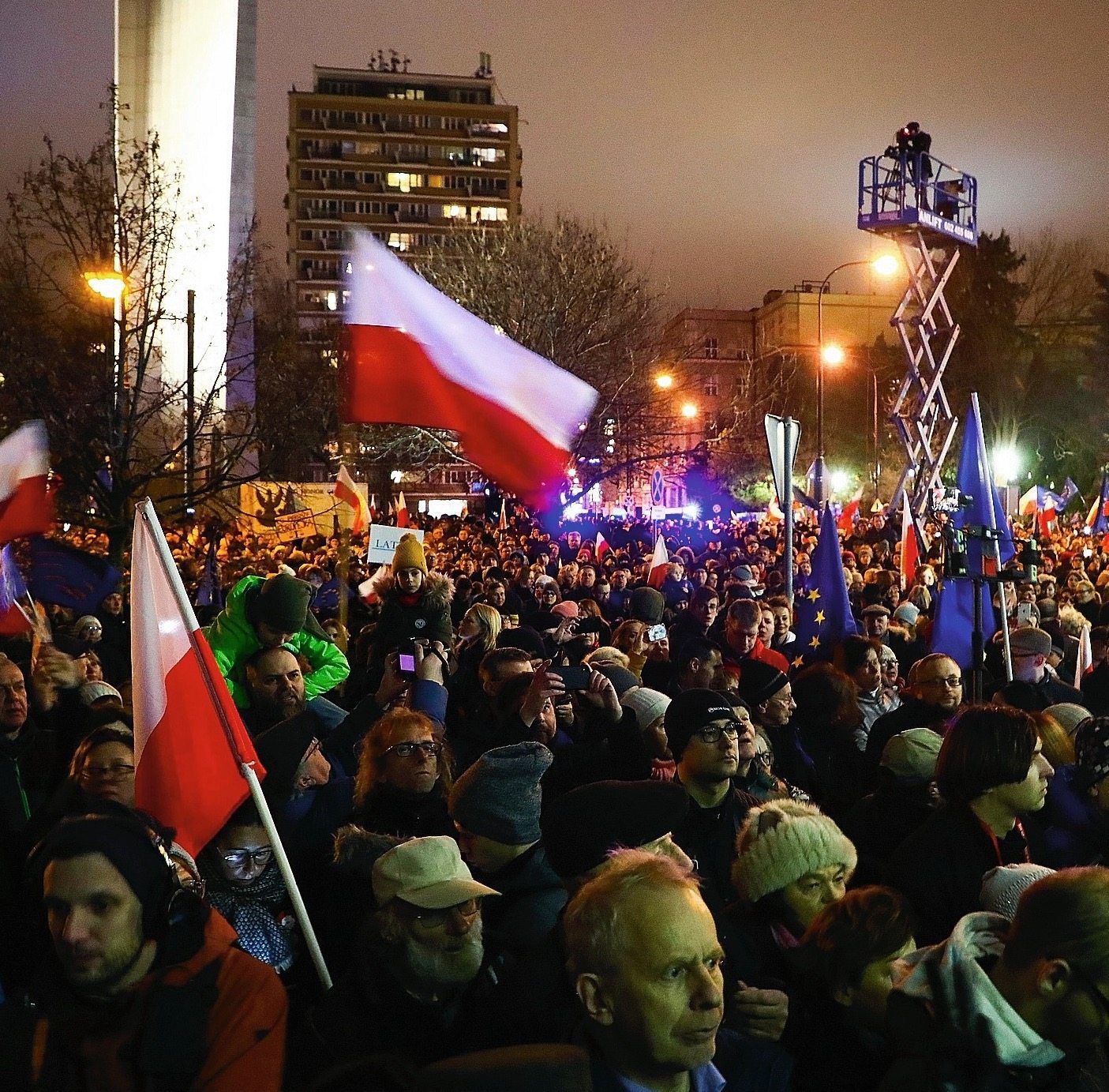 Protesters in Warsaw: "Let’s not forget that Poland and Hungary are young, fragile democracies," Jourová says.