DER SPIEGEL: Commissioner, do you know the German saying: When two are fighting, the third wins?

Malmström: Yes. But if you are alluding to the trade dispute between the U.S. and China, then this saying doesn't fit. A trade war between the two countries doesn't remain without consequences for Europe: Products get more expensive, markets react nervously and companies postpone investments. There's no reason for us to be happy.

Malmström: With regard to China, we see many things in the same way as the U.S. does. We are defending ourselves against state-subsidized companies buying up our most creative companies, we are fighting against intellectual property theft and for greater transparency. We are working closely with the U.S. and Japan on this, for example when it comes to better monitoring Chinese investments in our countries.

DER SPIEGEL: But you don't want to join Trump in his threats of punitive tariffs?

Malmström: These aren't our methods. The EU is a community based on the rule of law, and we abide by international rules. Trump, on the other hand, is using the threat of massive tariffs to assert political goals. We expressly do not share this approach. China is an economic rival for us, but not a political enemy.

DER SPIEGEL: Nevertheless, the EU's approach to the Chinese has also become clearer recently -- at the EU-China summit in April, for example. Is it helping you that the Chinese don't want to risk a second front in the trade war?

Malmström: We want to cooperate with China in environmental protection and in business. But we are not abandoning our demands in terms of human rights or in any other area. We want Chinese investment, but we will not naively stand by and watch China buy up key European industries.

DER SPIEGEL: Will Europe also have to shed its naivety toward the Chinese Internet giant Huawei and, as Trump is demanding, prevent the company from building up 5G networks in the EU?

Malmström: Each EU member state decides on its own how to deal with Huawei. As the Commission, we can only make and coordinate recommendations. We are doing that, too: By the end of September, we expect a report from each EU member state on its assessment of the threat to its communications infrastructure posed by Huawei.

DER SPIEGEL: The U.S. used to go into battle with tanks, but now it's with punitive tariffs. Is the EU prepared for that kind of confrontation?

Malmström: President Trump apparently prefers this strategy, but it would end up as the law of the jungle without the World Trade Organization (WTO). His approach is creating great uncertainty on the markets. In addition, some of Trump's measures, such as the U.S.'s punitive tariffs on steel and aluminum from the EU, violate WTO rules.

DER SPIEGEL: Trump seems to be using tariffs to achieve non-economic objectives, such as on migration. Will this method deliver success?

Malmström: Others will have to judge that, not least you as journalists. I just have one serious question: Has anything really happened at the southern border of the U.S. other than the fact that more soldiers were stationed there? Are there fewer refugees arriving or more? I don't know if anything has changed. But one thing's for sure: The damage to the U.S. economy is real. Each day we're hearing about complaints in the U.S. -- for example that steel and aluminum have become more expensive.

DER SPIEGEL: In Trump's world, Europe isn't a friend -- it is also a foe. If Trump reaches an agreement with Chinese President Xi Jinping on the trade dispute at this week's G-20 summit in Japan, will the EU be his next target?

Malmström: An American president who sees Europe as an opponent -- we all still have to learn how to deal with this situation. We've often had problems with the U.S., but at the core, the trans-Atlantic friendship was unbreakable. That appears to be different under Trump, which is disturbing to many Europeans.

DER SPIEGEL: You've been negotiating with Washington for months. Can you predict whether Trump will impose punitive tariffs on European cars in November?

Malmström: So far, there has been no sign of this happening. In any case, we do not share President Trump's view that the export of European cars is a threat to American national security. Some 420,000 jobs in the U.S. are dependent on Europe's auto industry. If Trump goes through with his threat, we're prepared. Our list of countermeasures is ready. But we are still talking -- about a free trade agreement and the harmonization of industrial standards.

DER SPIEGEL: U.S. Trade Representative Robert Lighthizer has complained that Europeans don't always have "the same level of ambition" as the U.S., particularly in agriculture.

Malmström: I have no mandate from the EU member states to negotiate with the U.S. to reduce our agricultural tariffs. The U.S. is also not prepared to talk about increased access for European companies to public tenders. Our idea is to first negotiate a very rudimentary free trade agreement in order to build trust. In the end, we could perhaps even get the U.S. and the EU to abolish all tariffs on each other's cars. 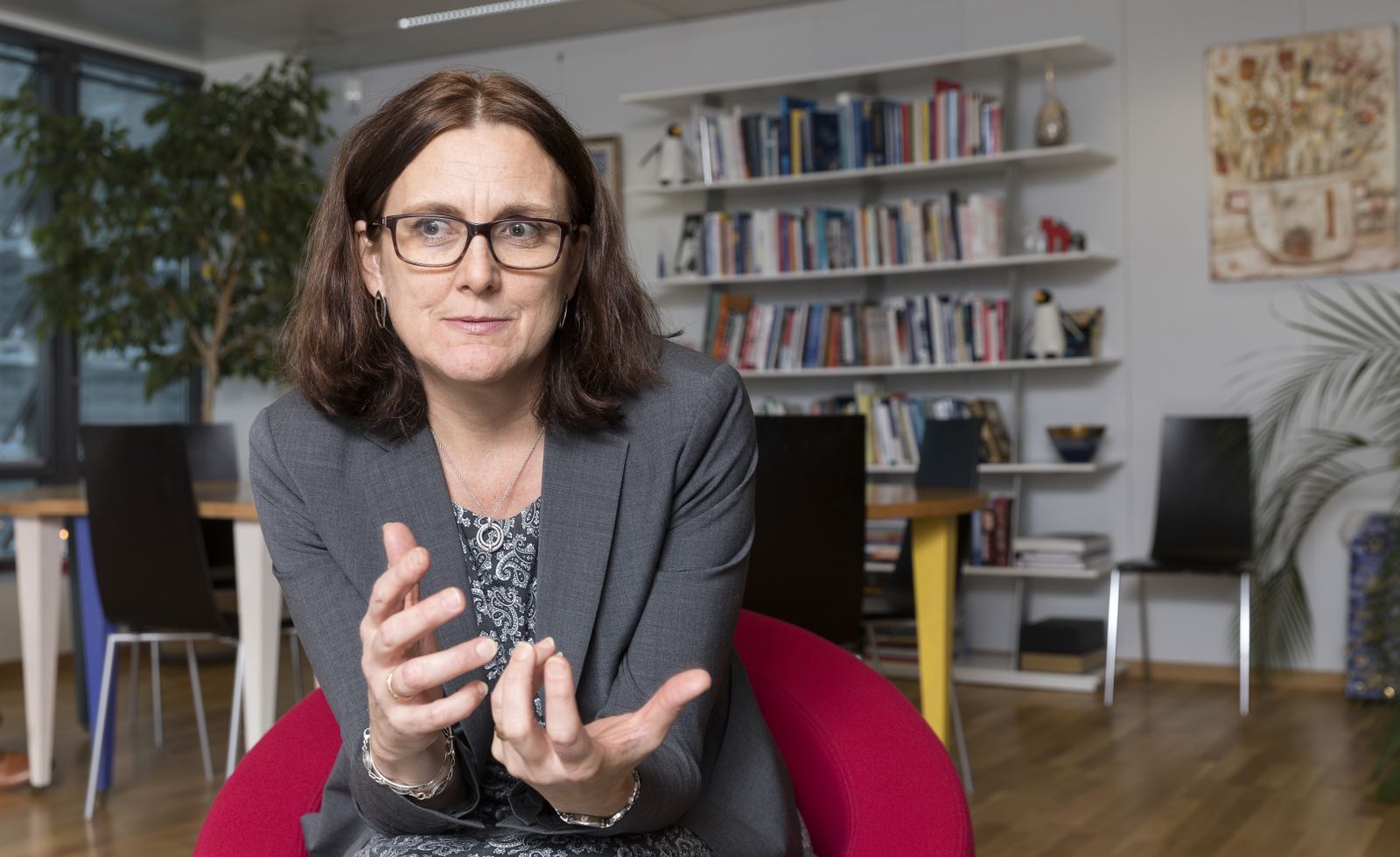