Malmström: I don't see why I would do such a thing.

DER SPIEGEL: The two have successfully blackmailed the European Union. The EU is now ready to negotiate lower tariffs with the U.S. on things such as American automobiles.

Malmström: Hang on. We won't allow ourselves to be blackmailed and we don't negotiate when someone puts a gun to our heads. I have made this very clear to my American counterparts over and over again. Only when it is certain that the U.S. will not impose punitive tariffs on steel and aluminum from the EU will we be prepared to discuss those issues that are important to President Trump.

DER SPIEGEL: The decision is to be made on June 1. Do you have any idea how Trump might ultimately decide?

Malmström: My impression is that there will be a permanent decision in one direction or another. Wilbur Ross and I have spoken on the phone maybe 10 times in the past few weeks. I will be meeting with him in Paris in a few days. I have made it very clear that we want to be permanently exempted from punitive tariffs. They violate the rules of the World Trade Organization (WTO) and are completely unjustifiable. But I cannot guarantee such a result. The final decision will be made by President Trump, and we have seen that his decisions can go either way.

DER SPIEGEL: Do you have the impression that Trump and his trade representatives are even open to rational arguments?

Malmström: I hope so. My impression is that Secretary Ross and U.S. Trade Representative Robert Lighthizer are close to the president and are negotiating on his behalf. They are extremely loyal to Trump, but that shouldn't come as a surprise to us.

DER SPIEGEL: When Trump recently decided to grant the EU another reprieve until June 1, your agency's reaction was almost churlish.

Malmström: Yes. This isn't a game. We are talking about 25 percent punitive tariffs on steel and 10 percent on aluminum. There is a lot of money at stake. And more than that, the uncertainty is hurting companies; all of this has taken far too long. To be clear, it is better for our companies to have a bad decision and clarity now than to perhaps have some prospect of improvement in the distant future. This uncertainty is already having negative economic effects. It hurts us all.

DER SPIEGEL: Assuming the decision is a positive one and negotiations can be started, will the EU offer a kind of TTIP light, some kind of comprehensive trade agreement?

Malmström: No, first we need to see what happens on June 1. I cannot enter any negotiations, I can only explore what the subject of those negotiations could be. And I would require a mandate for this. But regardless, there will be no TTIP light, it would be a minor agreement focused on tariffs and public procurement. In parallel, we are also ready to discuss how to reinforce our cooperation in the energy field, for example, and how to improve the functioning of the WTO.

DER SPIEGEL: So Trump will get what he wants: The U.S. will be able to sell liquified natural gas in the EU and tariffs on American automobiles will be eliminated.

Malmström: Tariffs on industrial goods would be part of this, including cars. The mechanics look like this: Since we do not have a free trade agreement with the U.S., automobile imports from the U.S. are subject to the same tariffs as imports from all other countries with which no such agreements exist either. If we want to reduce tariffs specifically for the United States, we need an agreement. That agreement would need to be mutually beneficial and they would also have to remove some of their high tariffs. That's what this is about.

DER SPIEGEL: With all due respect, that sounds like TTIP light ...

Malmström: No, please remember: TTIP was to become the largest, most ambitious trade agreement of all time. It was not just about industrial goods, it also included a big regulatory component, trade and sustainable development. I don't think the conditions are there to negotiate such an agreement today. If our TTIP negotiations with the Americans had been successful, we would not be in this predicament today. I still think President Trump would be worried about steel and aluminum, but that's not Europe's fault ...

DER SPIEGEL: What makes you so sure that Europeans will remain unified in negotiations with the U.S.? In recent weeks, it has been abundantly clear that Germany and France have opposing views on the question of how to deal with Trump.

Malmström: No. Look at the joint statement of the heads of state and government after their dinner in Sofia on Wednesday. Our common line is clear: We won't negotiate until Trump stops pointing the gun at our chest.

DER SPIEGEL: If we may, it seems to us that we Europeans are anything but united. German Economics Minister Peter Altmaier has been pushing for talks for some time, but France is hesitant.

Malmström: I wouldn't place too much stock in that. I speak almost daily with Peter Altmaier and the other ministers. They have different priorities, which is quite normal. I don't give the ministers grades here.

DER SPIEGEL: Let's talk about the alternative scenario. The EU is preparing to strike back if Trump actually does impose punitive tariffs. You recently notified the WTO of the countermeasures that have been prepared, such as punitive duties on bourbon whiskey, Harley Davidson motorcycles ...

Malmström: ... don't forget the peanut butter. Yes, I have made it extremely clear to Commerce Secretary Ross that our list of countermeasures is ready and includes 332 products on which we will also impose punitive tariffs in return, depending on the extent of the U.S. tariffs. We will react proportionally, just as the rules of the WTO allow for.

DER SPIEGEL: Does a schoolyard bully like Trump understand such tough talk better than suggestions for compromise?

Malmström: That may be true, but I always prefer compromise. That is in our DNA as Europeans. The EU is a community based on the rule of law and as such, treaties and the international order are correspondingly important to us. These rules almost always stem from the joint commitment of Europeans and Americans. That is why the EU is also defending the Iran agreement so vehemently. It is an agreement under the auspices of the United Nations, not just some deal, as it is often derogatorily referred to.

DER SPIEGEL: How badly damaged is the international system already?

Malmström: The international order is weakening because the USA is withdrawing more and more, but it is not collapsing. There is momentum in the other direction as well. Just look at how many countries the EU is currently concluding trade agreements with: The agreement with Japan is particularly important for Germany; our negotiations with Mexico just concluded; and discussions with the Mercosur countries are also making good progress. So there is also good news.

DER SPIEGEL: Does it make any sense to negotiate with the U.S. on customs issues? You can't even be sure that Trump won't simply cancel everything at the next full moon. Is the U.S. still a reliable partner?

Malmström: We'll see. But one thing is clear: If we enter into negotiations, we will have to set parameters. We do not negotiate anything that does not benefit both parties. And in every agreement, there's some sort of mechanism for conflict resolution between the parties.

DER SPIEGEL: You mentioned the Iran agreement. The question of whether Iran will continue to abide by the agreement and refrain from relaunching its nuclear program will depend very much on whether European companies can continue to do business with the country despite the American sanctions. The EU is clearly struggling to help these companies. What has to happen?

Malmström: We are working on it. Of course we must support European companies that are doing perfectly legal business with Iran and are now becoming the target of sanctions. However, this is not easy. And don't forget, we do not yet know whether Iran will continue to abide by the agreement. There are strong forces in Tehran who would now like to throw the deal into the trash.

DER SPIEGEL: Recently, the Trump administration was able to welcome a minor victory. The WTO ruled that EU aid to Airbus was inadmissible. Is it possible that the EU is not behaving much better than Trump on trade issues?

Malmström: The WTO ruled that some elements of our aid to Airbus violate WTO rules, but the vast majority do not. Plus, there will likely be another ruling this year when the arbitration court decides on American aid for Boeing. I'm looking forward to it.

DER SPIEGEL: Even if it's easy to forget due to Trump's conduct, the EU still has plenty of common interests with the U.S., for example with regard to the overproduction of Chinese steel. Why don't you work more closely with the Americans?

Malmström: This may surprise you, but we've been doing so for quite some time. We talk about it all the time in various bodies, including with the Americans. We talk about how to deal with China when it comes to overcapacity in the steel sector, or about issues relating to intellectual property protection and subsidies. We are also discussing how to deal with certain foreign investments. The U.S. and Japan have their systems and we just presented a proposal. I hope that we can bring this to a conclusion before the end of the year.

DER SPIEGEL: How much of a danger do Chinese investments in sensitive economic sectors -- for the purpose of, for example, stealing European know-how -- actually pose?

Malmström: Our law is not directed against any particular country, even if there are concerns about China right now. It is not a question of preventing free trade. Some of the investments from China and elsewhere have been fantastic. However, we want those member states that do not yet have instruments to evaluate investments to follow common criteria if they want to create them. And if we act together on this, maybe we will give member states the strength to say no to some tempting proposals.

DER SPIEGEL: What kind of proposals are you referring to?

Malmström: Investments in ports or airports, for example, or in communications or IT companies: They can be problematic, but they don't have to be. That's what I'm talking to my American partners about.

DER SPIEGEL: How do you explain the fact that the U.S. treats its partners like adversaries in some areas yet wants to join forces with them in others -- in opposition to China, for example.

Malmström: Frankly, I have no explanation for it. It is indeed a bit inconsistent.

DER SPIEGEL: Ms. Malmström, we thank you for this interview. 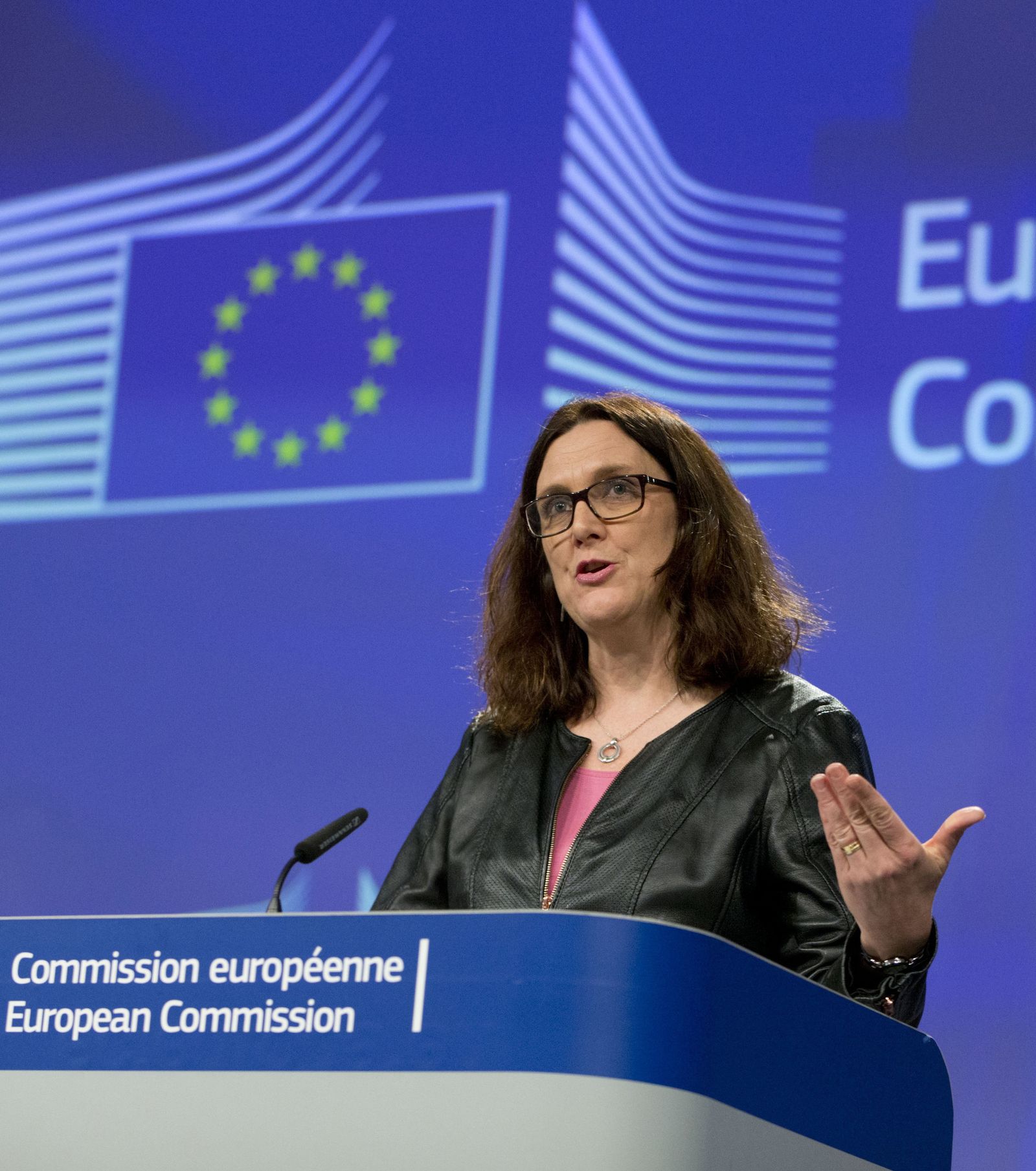 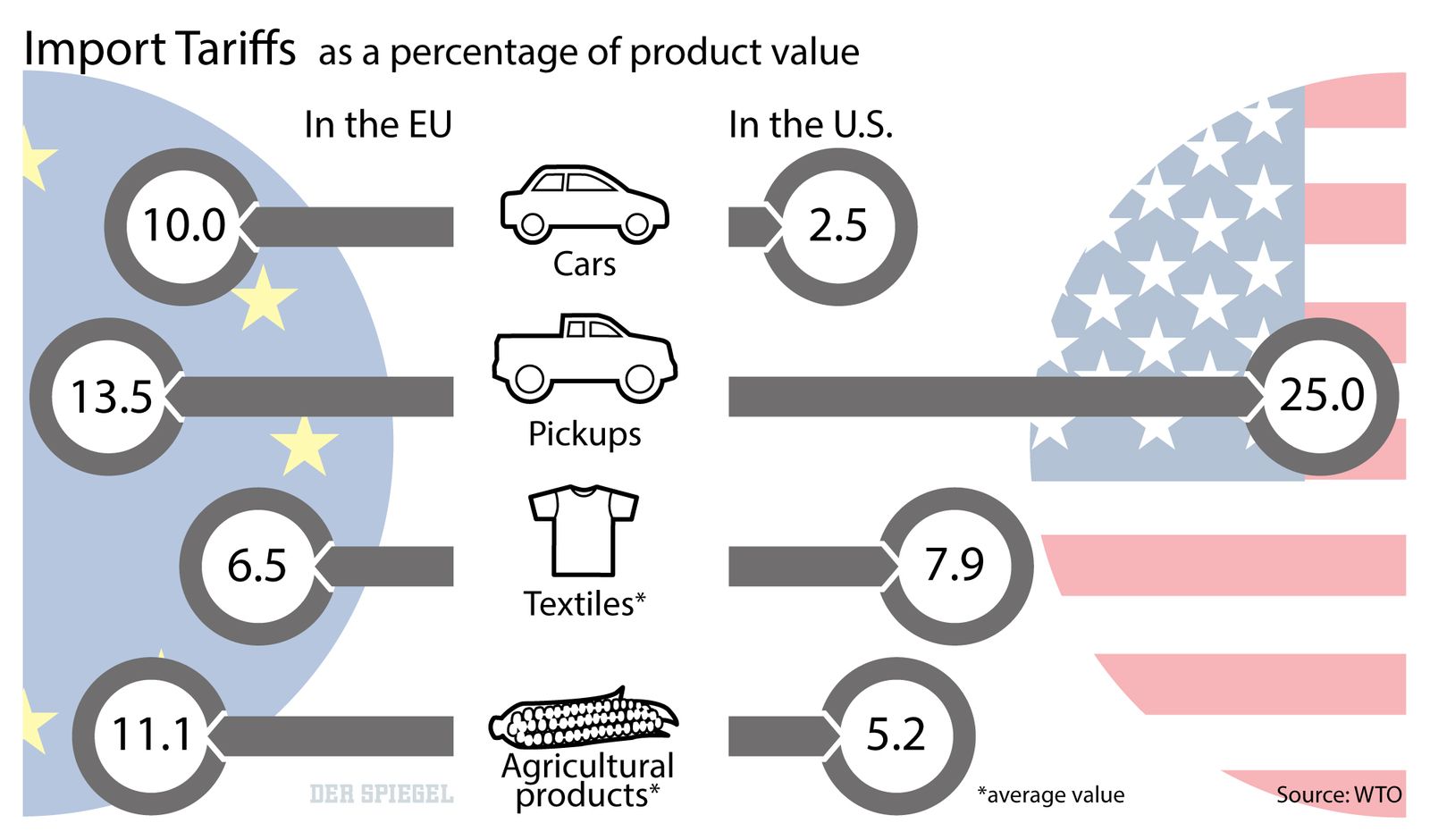