A debate has sprung up in Germany in recent months over a significant uptick in immigration from Romania and Bulgaria. The final limitations on the freedom of movement and access to labor markets in the European Union, which the countries joined in 2007, were lifted in January.

Since the two countries joined the EU, the number of migrants from Romania and Bulgaria moving to Germany has risen dramatically. Because they come from poorer countries, many populist politicians have accused these immigrants of seeking to take advantage of Western European social safety nets. In Britain, some politicians call them "benefit tourists;" in Germany they've been given the label "poverty migrants". Residents of the two countries generally earn far less than their fellow citizens in Western Europe, and large Roma populations from both have made their way to what they hope will be greener pastures in recent years.

Despite the statistical fact that most Bulgarians and Romanians living in Germany are gainfully employed, their presence has launched a heated discussion about the EU's freedom of movement rules and access to social welfare benefits.

SPIEGEL ONLINE spoke with Lásló Andor, the European commissioner for employment, social affairs and inclusion, about his office's recent criticism of a German legal clause that restricts immigrants from other EU countries from immediately accessing German unemployment benefits.

SPIEGEL ONLINE: Your office is on the eighth floor of the European Commission's headquarters in Brussels. Does it feel like you live in an ivory tower?

Andor: Definitely not. Yes, our offices are in Brussels, but like all commissioners, I visit the member states regularly. We have to see the situation on the ground. We inspect all the issues we are dealing with. During the past year I visited Berlin, I was twice in Bavaria and twice in Leipzig. I was in Hamburg and I will visit Berlin's Neukölln district this week and Duisburg next week.

SPIEGEL ONLINE: When the Süddeutsche Zeitung recently reported that the European Commission had criticized a central element of Germany's so-called "Hartz IV" welfare laws for the unemployed at the European Court of Justice, Horst Seehofer -- chairman of the Christian Social Union (CSU), the Bavarian sister party to conservative Chancellor Angela Merkel's Christian Democratic Union (CDU) -- said it drives him "to despair how little this EU Commission takes note of the everyday reality of citizens in Europe."

Andor: In this debate many things are presented in a distorted manner. Last year, a so-called quality newspaper from the United Kingdom suggested that there were 600,000 unemployed people from other EU countries (in Britain). The correct number is just one-tenth of that figure. Some people are deliberately spreading lies. They take advantage of the fears in some sectors of the population.

SPIEGEL ONLINE: The opinion you submitted to the European Court of Justice on behalf of the Commission, argued there cannot be a blanket ban excluding citizens from other EU countries from receiving German Hartz IV unemployment benefits -- and that each case has to be dealt with individually on the basis of the person's circumstances. The head of the joint CDU/CSU group in the German parliament, Volker Kauder, warned of a "substantial flow of people" if the court backs the Commission's position.

Andor: We are not advocating that every EU citizen should have the right to social welfare in Germany from day one! In times of elections or economic crisis, bashing migrants is very easy for populists. There are unscrupulous politicians who want to capitalize on such feelings. They start to blame the EU for expanding to certain countries. There is very often a sense of superiority: "Because we are a higher income country we should be able to tell the others where their place is." That is very far away from the spirit and the law of the EU under which we are all EU member states and EU citizens and thus share the same rules and the same rights.

SPIEGEL ONLINE: In some places, such as Duisburg, which has seen the arrival of large numbers of Romanian and Bulgarian workers, reality might look different.

Andor: I am not denying the problems. But the freedom of movement in the EU is a fundamental right. It applies to everybody because we are all European citizens with equal rights. The European single market was developed to create opportunities for all. Everybody benefits from the mobility: The companies who would otherwise not find the workforce. The origin countries because many of the workers are sending home a significant part of their income and then come back with more professional experience. And the host countries, because the fact is that their gross national product is growing faster. In addition, the social welfare budgets of the host countries are also boosted because migrant workers pay more in taxes than they receive in benefits. If a country like Germany is already a big winner of labor mobility, I think it is morally wrong to try to to reduce your welfare costs as much as possible at the expense of EU citizens from other countries.

SPIEGEL ONLINE: Germany's Hartz IV law includes a clause stipulating that citizens from other EU countries can be the subject of a blanket ban from that social payment. Is that in line with EU law?

Andor: It is not. There always has to be an individual assessment of each case.

SPIEGEL ONLINE: If the German government does not change that clause, will the Commission launch an infringement procedure against Germany?

Andor: If there is a sustained practice which breaks EU law or if national law is not in full harmony with EU law, the Commission can start an infringement procedure. It starts with a letter of formal notice. But we are very far from this. If the problem can be solved by the European Court of Justice, the Commission does not have to act.

SPIEGEL ONLINE: Last spring, the Belgian government filed a complaint with the Commission against wage dumping -- unacceptably low wages that undercut competition -- in the German meat processing industry. The government claimed that some workers in Germany are paid only €3 ($4) or €4 per hour, without any social protection, and that these "mini-jobs" undermine EU competition rules. Belgian Economics and Consumer Affairs Minister Johan Vande Lanotte described such practices as unacceptable. "That is unfair competition," he said. Where does the Commission stand on this?

Andor: We seriously looked into this. This example shows that not everything should be allowed under the umbrella of free movement. The fact that the new German government announced the introduction of a comprehensive minimum wage (for the first time in Germany) changed the situation and could be a solution to the wage dumping Belgium complained about. The decision to implement a minimum wage is a very good one; we have been advocating it for a long time. It is good for the German taxpayers because there will be less need for topping up lower salaries with social assistance. It is good for the German economy because it will boost demand, and it is also very good for the euro zone as a whole. If you ask me, the minimum wage should come even earlier than planned. (The German government is set to implement a minimum wage nationwide by Jan. 1, 2017.)

SPIEGEL ONLINE: As a Socialist yourself, are you happy that Germany's Social Democrats have joined Chancellor Merkel's government?

Andor: I see that there is a more balanced approach. The German government is more aware of the problems the export surpluses create for other countries. I also think it is good that the new government wants to reconcile better work and family life. Indeed, some ministers are living that new vision themselves by working from home on some days.

László Andor, 47, studied economics in Budapest, Oslo and Washington and later taught as an economics professor at various universities. He has served as the European commissioner for employment, social affairs and inclusion since 2010. The Hungarian national is married and has two children. 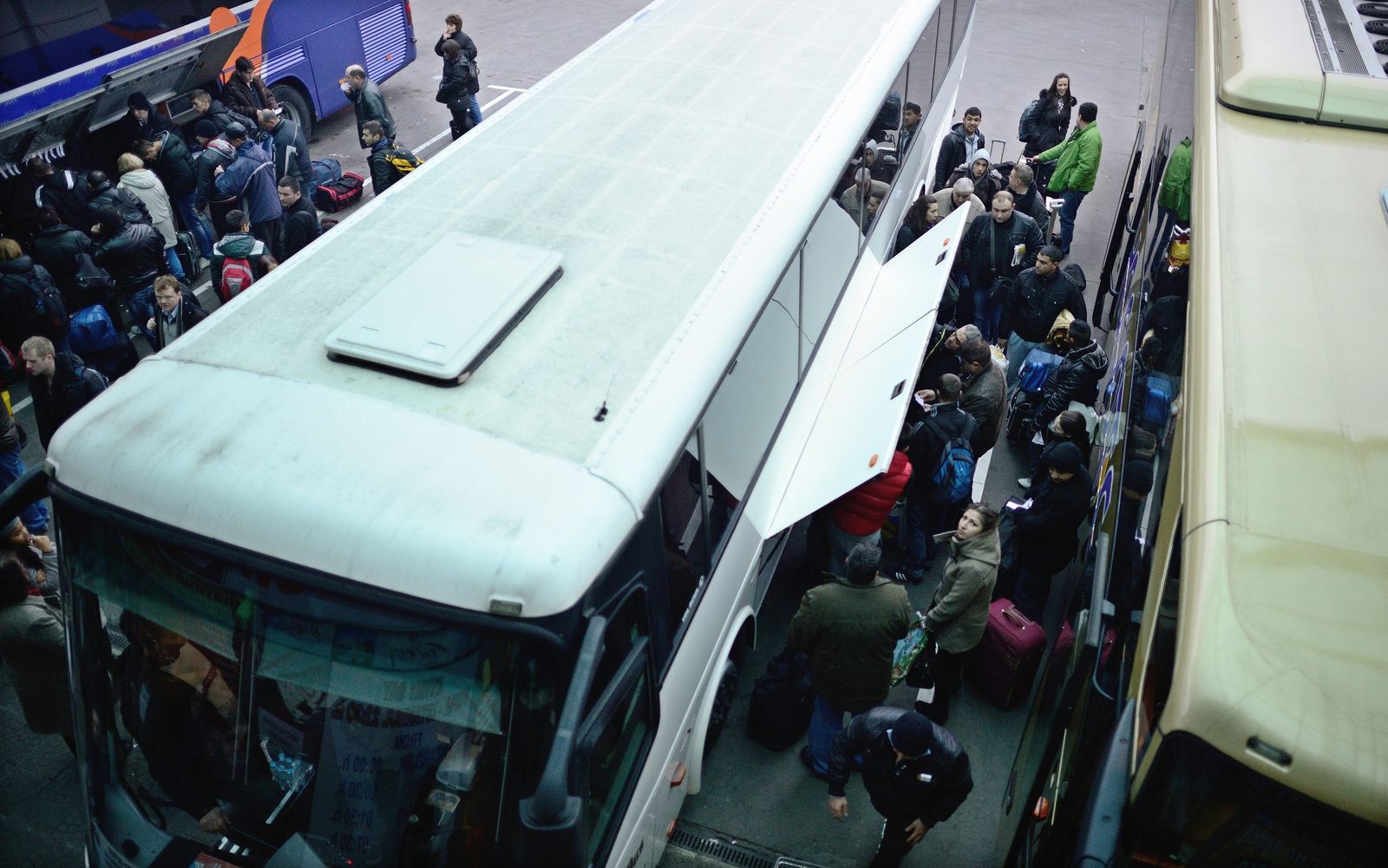 Passengers put their luggage onto a bus departing for Western Europe at the central bus station in Sofia, Bulgaria on Jan. 2.