DER SPIEGEL: Mr. Oettinger, the head of the center-left Social Democrats (SPD) in Germany, Martin Schulz, has said that he would like to see the European Union transformed into the United States of Europe. Even though you are a member of the center-right Christian Democrats (CDU), it is a goal that you, as Germany's representative on the European Commission, have a great deal of sympathy for, is it not?

Oettinger: The term is certainly not objectionable. Plus, Martin Schulz didn't invent it himself. Konrad Adenauer also spoke of the United States of Europe as did, much earlier, Victor Hugo. What they meant is more relevant than ever: There are challenges that we Europeans can only meet together -- controlling migration, for example, and making research more effective, and our militaries. To put it in the language of business, in the competition with the Pentagon and Silicon Valley on the one hand and China on the other, only Europe in its entirety has the necessary operational size.

DER SPIEGEL: The problem, though, is that the EU is currently far from being able to agree on common goals. On the contrary, divisions seem to be growing. Recently, the Commission even took the step of initiating rule-of-law proceedings against Poland.

Oettinger: The risk of division exists, but it was greater one year ago. As bad as Brexit is, it has brought Europeans together to a certain degree.

DER SPIEGEL: Why is the Commission going after Poland while at the same time Commission President Jean-Claude Juncker is fawning over Austria's new chancellor, Sebastian Kurz, in Brussels even though Kurz has formed a government with the right-wing populist Freedom Party of Austria (FPÖ)?

Oettinger: Austria's new government has earned a chance. There is nothing in their coalition agreement that is inconsistent with European law and the rule of law. Plus, the Austrian president has a vigilant eye on the new government. And you can be sure that we too will keep close watch on the work done by the FPÖ ministers in Vienna and particularly in Brussels.

DER SPIEGEL: Kurz, though, has already said that he agrees with the Polish government's rejection of certain EU decisions, such as the quota for the redistribution of refugees. What is your response?

Oettinger: Europe is an extremely attractive continent in an extremely unstable neighborhood. The consequences are born by countries like Greece, Italy, Bulgaria, Spain, Malta and Cyprus, in particular. As such, solidarity would dictate that we assist them. The quota remains a correct instrument to fairly distribute the challenges we face.

DER SPIEGEL: Do you think it would make sense to force countries like Poland or Hungary to accept refugees and adhere to rule-of-law principles by cutting the funding they receive from the EU?

Oettinger: The question has indeed been raised. In early January, I will discuss the issue with experts and with my Commission counterparts. I don't want to take a position prior to those discussions, but it seems clear to me that the EU's Regional Development Fund, for example, works better if recipients adhere to the rule of law.

DER SPIEGEL: The Catalonians have also complained that Brussels is applying double standards. Whereas the Commission is moving decisively when it comes to Poland, it has stayed away from the conflict between Madrid and Barcelona. Shouldn't the EU position itself as an intermediary in the standoff?

Oettinger: We are counting on the Spanish prime minister being skillful enough to restart talks with Barcelona after the election. From the German perspective, I can only suggest from a position of humility that Spain take a closer look at governing systems in Europe where regions have their own constitutions and a significant degree of autonomy -- on issues such as the budget, for example, or the judiciary or education.

DER SPIEGEL: You envision Catalonia becoming something like a state on the German model?

Oettinger: Germany and Austria have had positive experiences with strong states and a cooperative democracy. I am certain that this example could be helpful in a constructive debate on the Catalonian situation.

DER SPIEGEL: Given the problems facing the EU, French President Emmanuel Macron's ambition to modernize the bloc is refreshing. How great are his chances for success when it comes to, for example, reforming the eurozone?

Oettinger: A eurozone budget, one perhaps including several percent of gross social product, is not something I believe is realistic. But that shouldn't be the extent of our answer to Macron. The completion of the economic and currency union is an urgent task that we should complete before European elections in spring 2019. The proposals made by the Commission and by Macron provide an excellent basis for discussion. My request to Berlin is to avoid tearing each individual proposal to shreds, but to work with them.

The article you are reading originally appeared in German in issue 1/2018 (December 30th, 2017) of DER SPIEGEL.

DER SPIEGEL: The problem, though, is that Germany doesn't currently possess a government with the authority to participate in such far-reaching reforms. Do you think the CDU should form a minority government in the interest of the European Union?

Oettinger: There are a few minority governments in Europe, but I think the largest member state would be well-advised to establish a government that can rely on a clear parliamentary majority. Think about EU summits. If the chancellor were forced to obtain support from parliament for each and every detail, it would slow the work of the EU.

DER SPIEGEL: Will the decision regarding Germany's next representative on the European Commission be part of the coalition negotiations?

Oettinger: The mandate of the current Commission extends to the middle of 2019. As such, I don't believe it is necessary to address the question at this time.

DER SPIEGEL: Are you available for an additional term on the Commission?

Oettinger: I plan to fulfill my mandate to the end and, in particular, to finalize the budget for the coming years. After that, however, I plan to move into the private sector. 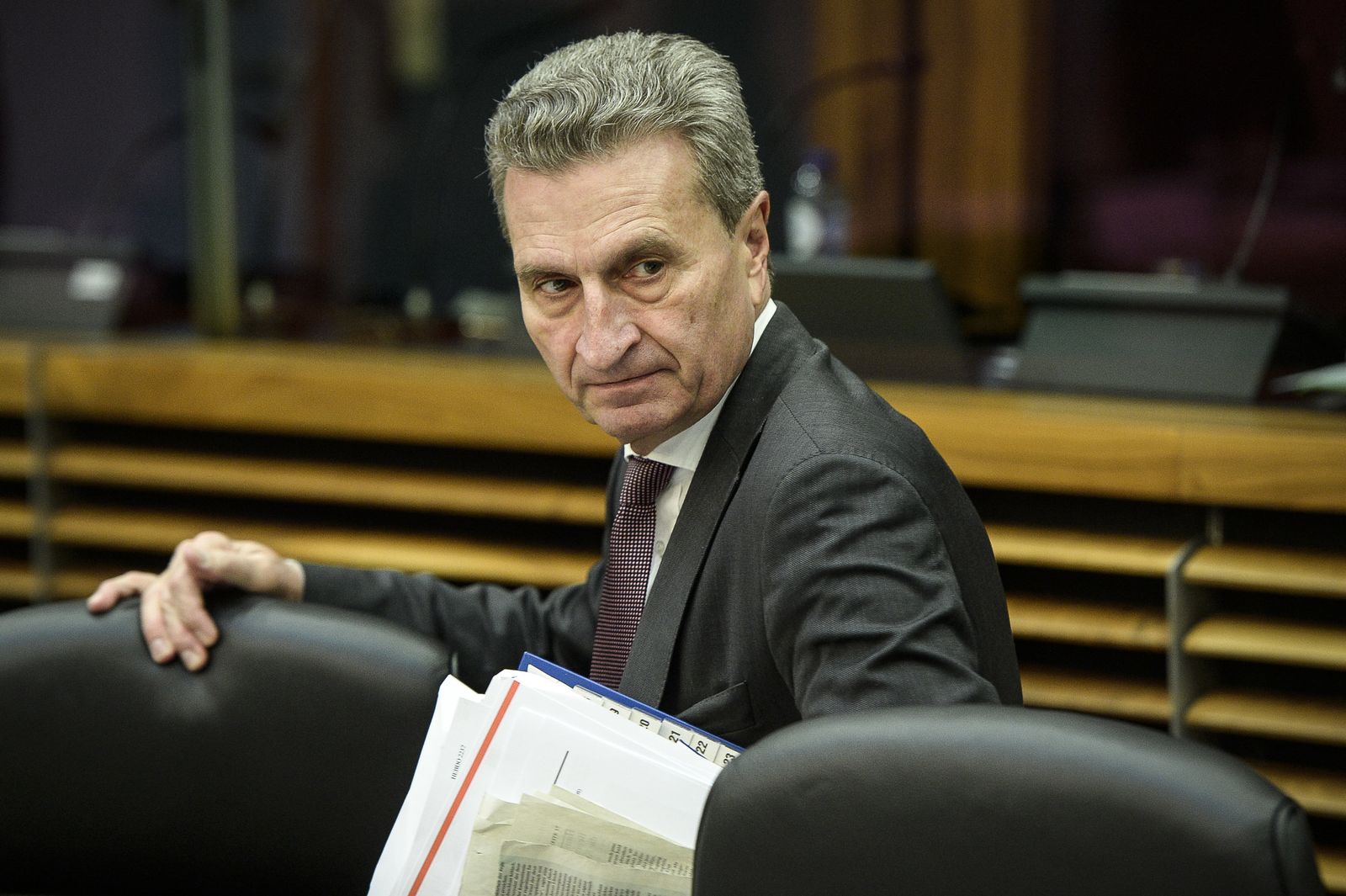