SPIEGEL: Mr. Moscovici, why should anyone believe that you, as the EU currency commissioner, will push through the euro stability criteria? During the entire time you served as finance minister in Paris, the French budget deficit was always over the permitted 3 percent.

Moscovici: Between 2012, when I entered office as finance minister, and 2013, France reduced its budget deficit from around 5 percent of gross domestic product to 4.1 percent despite a difficult economic situation. But I am not sitting in front of you as the French finance minister, but rather as the EU currency commissioner. In this function, I represent the interests of the European Union. I make decisions that must be approved by the entire College of Commissioners and are based on set rules. My political past doesn't play any role.

SPIEGEL: In the debt negotiations with Greece, you have tended to be lenient. You followed a weak line despite the fact that the euro-zone member states are liable for the money that has been lent. Why?

Moscovici: The Commission negotiated as an honest broker! After all, all of us in Europe are in agreement that a Grexit would be a catastrophe -- for the Greek economy but also for the entire euro zone. There's more to it than just a common exchange rate zone -- it's a currency union. If a country leaves this union, the market will immediately wonder what country will come next, and that could be the beginning of the end.

SPIEGEL: Such an apocalyptical view mean the Greeks can simply go on placing additional demands -- because, according to your logic, the euro zone would be far worse off without them.

Moscovici: Read the agreement that we reached with Athens very closely. In it, the Greek government explicitly recognizes the monitoring of its institutions by the Commission, the European Central Bank and the International Monetary Fund. In addition to further reforms, it also commits to generate a primary surplus in order to eliminate its debt step by step. Do these results really sound like successful blackmail?

SPIEGEL: Yet the possibility of a third bailout package of up to €20 billion is already under discussion.

Moscovici: Before we discuss that, we first need to complete the review of the current bailout program so that we can disburse the funds remaining in it.

SPIEGEL: Member states like Spain, Portugal and Ireland, which had to implement tough reforms in exchange for bailouts, oppose further aid for Greece.

Moscovici: I can well understand these countries' frustration. Eighteen finance ministers in the Euro Group recently made extremely clear to Mr. Varoufakis that the Greek government should not just be thinking about its voters -- it must also take into consideration those in the other EU member states. The finance minister of one Baltic state pointed out that Greece is insisting on increasing its minimum wage by 20 percent despite the fact that the (minimum wage) in his country is only half as high. It is difficult to convey to people there why they should be paying.

SPIEGEL: Perhaps this frustration is also based on the fact that the Greek government is heating up the situation with constant new demands. Shortly after the agreement, Greek Finance Minister Varoufakis again demanded a debt haircut.

Moscovici: What's more important to me is that Varoufakis wrote in an official letter to the Euro Group that it recognizes the monitoring by the institutions. That counts much more than any interview he gives.

SPIEGEL: Are you similarly optimistic about the reform list that Athens has presented? After all, the Greek government constantly makes promises that it doesn't keep.

Moscovici: That's going too far. Not enough has happened, that much is true. But we have to work together with the Greek government to change precisely that. What's the alternative?

SPIEGEL: What could this alternative look like if, as you portray it, a Greek exit from the euro is not an option?

Moscovici: We cannot forget that a Grexit would have serious consequences for us. But I am convinced that we can keep the country in the euro zone -- and that we can also insist on a comprehensive reform program.

SPIEGEL: Greece is not the only problem child in the euro zone. France has violated the euro Stability Pact for the past seven years. Why did the Commission nonetheless decide to give Paris another two years to get its deficit down to 3 percent of gross domestic product?

Moscovici: Read our decision in its entirety. It keeps up pressure on France. Already this year, the government must markedly reduce its budget deficit, and it has to continue doing so for both of the next two years as well as implement numerous structural reforms. We have in no way given it a free ride, rather, we have formulated very serious conditions.

SPIEGEL: Still, you have more or less ruled out the possibility of extensive fines. You describe sanctions as "collective failure".

Moscovici: That's also true. We want to convince euro member states to improve themselves through reforms. That is precisely what France needs to do now. If we just impose sanctions, then this type of persuasion fails.

SPIEGEL: But one of the lessons of the euro crisis was that stiff punitive measures must be taken against rules violations because otherwise member states won't adhere to their joint agreements.

Moscovici: Only when the objective conditions are present. However, France has definitely made progress in the past two years -- and we are now demanding many further steps in the coming years. That is much more effective than sanctions.

SPIEGEL: How do you justify such optimism? Just last month, French Prime Minister Manuel Valls only managed to push through moderate reforms by issuing a rare emergency decree in the National Assembly in order to bypass parliament.

Moscovici: Should we seriously say to a French government that is finally bringing itself to undertake reforms, "We still don't trust you?" Shouldn't we really be placing greater trust in it right now? The German chancellor, incidentally, also views it this way. She just praised the "impressive reform agenda" of the government in Paris. And, I repeat: This year alone, in order to comply with requirements, France must implemented additional savings of €4 billion by June -- that's no trifling matter.

SPIEGEL: Günther Oettinger, your German colleague on the College of Commissioners, says that France will only be able to achieve that through "creative bookkeeping".

Moscovici: I don't think that choice of words is appropriate. I object to French people openly criticizing Germany and vice-versa when Germans do the same to France. If France and Germany don't trust each other, there's simply no future for Europe.

Moscovici: Neither President Hollande nor I ever expressed any doubt about the need for France and Germany to work together. But it is also right to remind people that Germany also has a need for reforms. France must become more competitive and reduce its trade deficit. However, Germany received the recommendation from Brussels that it do more to spur investment. That is in Germany's interest and in the interest of the entire euro zone. 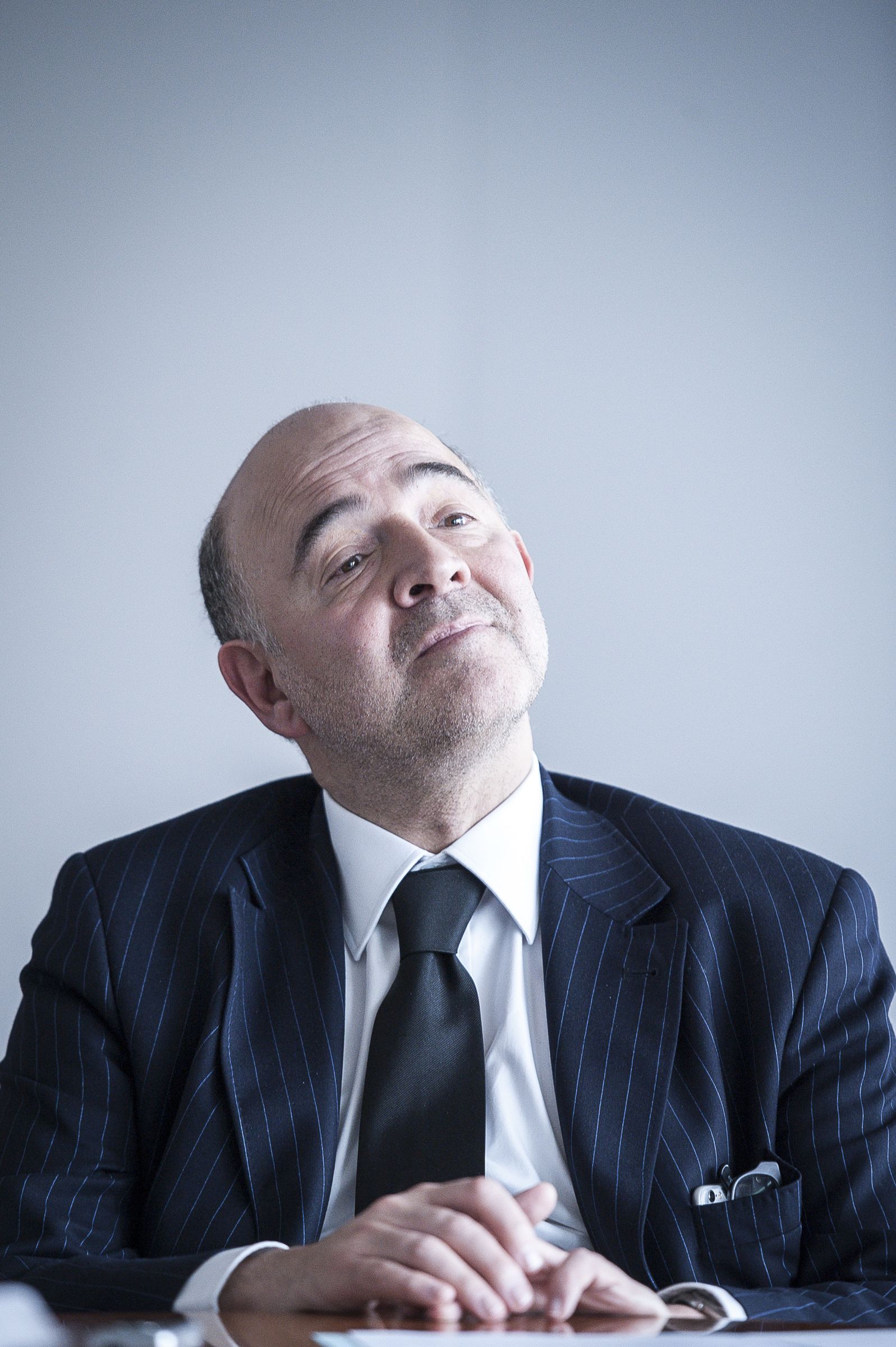 EU currency commissioner Pierre Moscovici: "We cannot forget that a Grexit would have serious consequences for us." 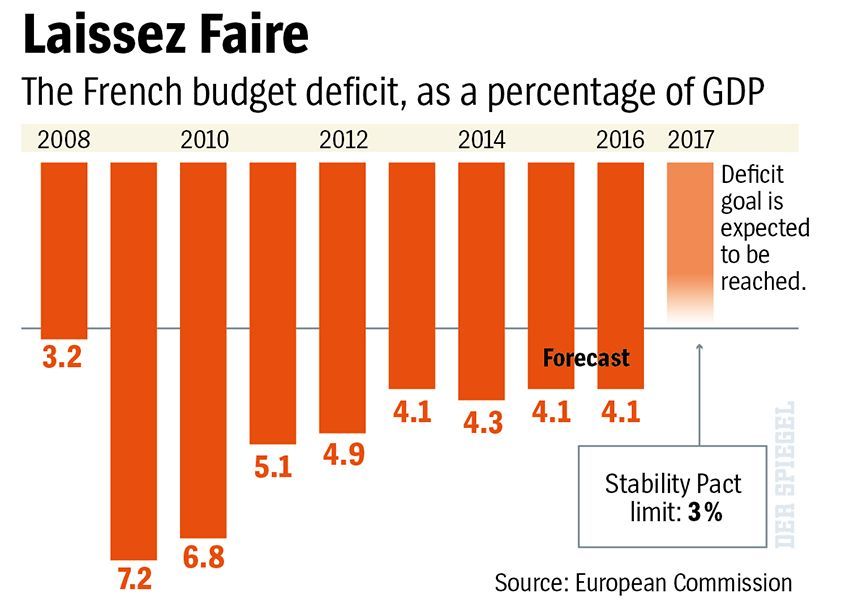