Great Britain would very much like to penalize Russia for its encroachment on the Crimean Peninsula. But it should cost the UK as little as possible. That, it would appear, is London's strategy for dealing with Moscow's aggression against Ukraine -- an approach made public through an embarrassing blunder on Monday. A freelance photographer snapped a picture of a classified document held by a government official as he entered Downing Street for consultations. The document outlined the potential punitive actions British Prime Minister David Cameron might take against Russia.

Britain should "be prepared to join other EU countries in imposing 'visa restrictions/travel bans' on Russian officials," the paper advised. It added that Britain should "not support, for now, trade sanctions … or close London's financial center to Russians."

The message is clear: The British economy, which profits immensely from wealthy Russians, should be protected from potential fallout from the ongoing stand-off over Ukraine. Sanctions of some sort, it has become increasingly clear, will almost certainly be imposed, particularly with EU leaders gathering in Brussels on Thursday to develop a joint bloc response.

But the document photographed outside Downing Street reflects the deep wariness in the EU of the potential costs associated with punitive action against Moscow. Brussels wants to send a message, while preventing excessive backlash.

The risks for such a backlash are high. The EU economy is heavily reliant on Russia -- the country represents the EU's third-largest trading partner. The reverse, of course, is true as well: Europe is number one on the Russian list. Economic ties between the EU and Russia continue to be tight despite the turbulence triggered by the global economic crisis and the 2008 Russia-Georgia conflict. European exports to Russia primarily include machinery, chemicals and agrarian products whereas imports from the Russians are predominantly made up of raw materials.

The EU was also a major backer of Russia's admission to the World Trade Organization in 2012 and maintains significant influence over Moscow; EU member states are by far the most important source of foreign investment in Russia.

Nevertheless, with tough rhetoric having come out of several European capitals in recent days, and equally pointed retorts emanating from Moscow, it seems likely that some form of tit-for-tat looms. French Foreign Minister Laurent Fabius on Tuesday said that EU sanctions could come as soon as Thursday. In response, Russian parliament has warned that Moscow would respond in kind, according to a Wednesday report on the Voice of Russia website.

Countermeasures from Russia could prove painful to the EU, particularly when it comes to the energy sector. Germany, for example, imports more than a third of its natural gas and oil from Russia; other European countries are vastly more dependent on Moscow for their energy needs. Theoretically, Europe could compensate by turning to Norway for its natural gas needs, but energy prices would spike as a result.

Thus far, no concrete steps have been taken to impose penalties aside from the suspension of trade talks between the US and Russia. The EU, however, has been openly considering sanctions on individuals and specific companies, so-called targeted measures.

The US is keeping a close eye on Europe's sanctions debate, knowing full well that America alone is unable to exert sufficient pressure on Moscow. The US isn't even among Russia's top 10 trading partners. "The Americans can only exert effective economic pressure on Russia together with Europe," says transatlantic expert Jack Janes of the American Institute for Contemporary German Studies in Washington.

It is now up to the Europeans to decide how far they want to go. And given the wildly varying degrees of enthusiasm for sanctions, it seems safe to assume that they won't go far. Several Eastern European countries have emerged as hardliners, but the further the distance from Ukraine, the less the enthusiasm for confronting Russia. The Austrians, too, expressed skepticism of punitive measures on Wednesday, with Finance Minister Michael Spindelegger saying that in the Ukraine crisis, the focus should not be put on sanctions.

Germany is somewhere in the middle, with Foreign Minister Frank-Walter Steinmeier stressing the creation of a forum for direct Ukraine-Russia talks over sanctions. Gernot Erler, the German government's coordinator for relations with Russia, has also been cautious. "I would warn against imposing sanctions at the current point in time," he told SPIEGEL ONLINE on Tuesday. "Such a move could ruin chances for achieving a political solution, as small as the window for such a solution might appear."

No matter what happens, though, collateral damage is to be expected, with the New Russia-EU Framework Agreement likely to suffer. Negotiations on the deal have been sluggish recently, primarily due to Russia's focus on creating a customs union with Belarus, Kazakhstan and Ukraine.

On the website of Germany's Foreign Ministry, a blurb about the Framework Agreement reads: "Negotiations have been ongoing since 2008 on this ambitious document, which is to establish a reliable and long-term foundation for relations in the areas of politics, economics, trade, science and culture. The discussions have come a long way. But because of the importance of the agreement to both sides, diligence takes precedence over speed."

Given the current stand-off, that is likely truer now than ever before. 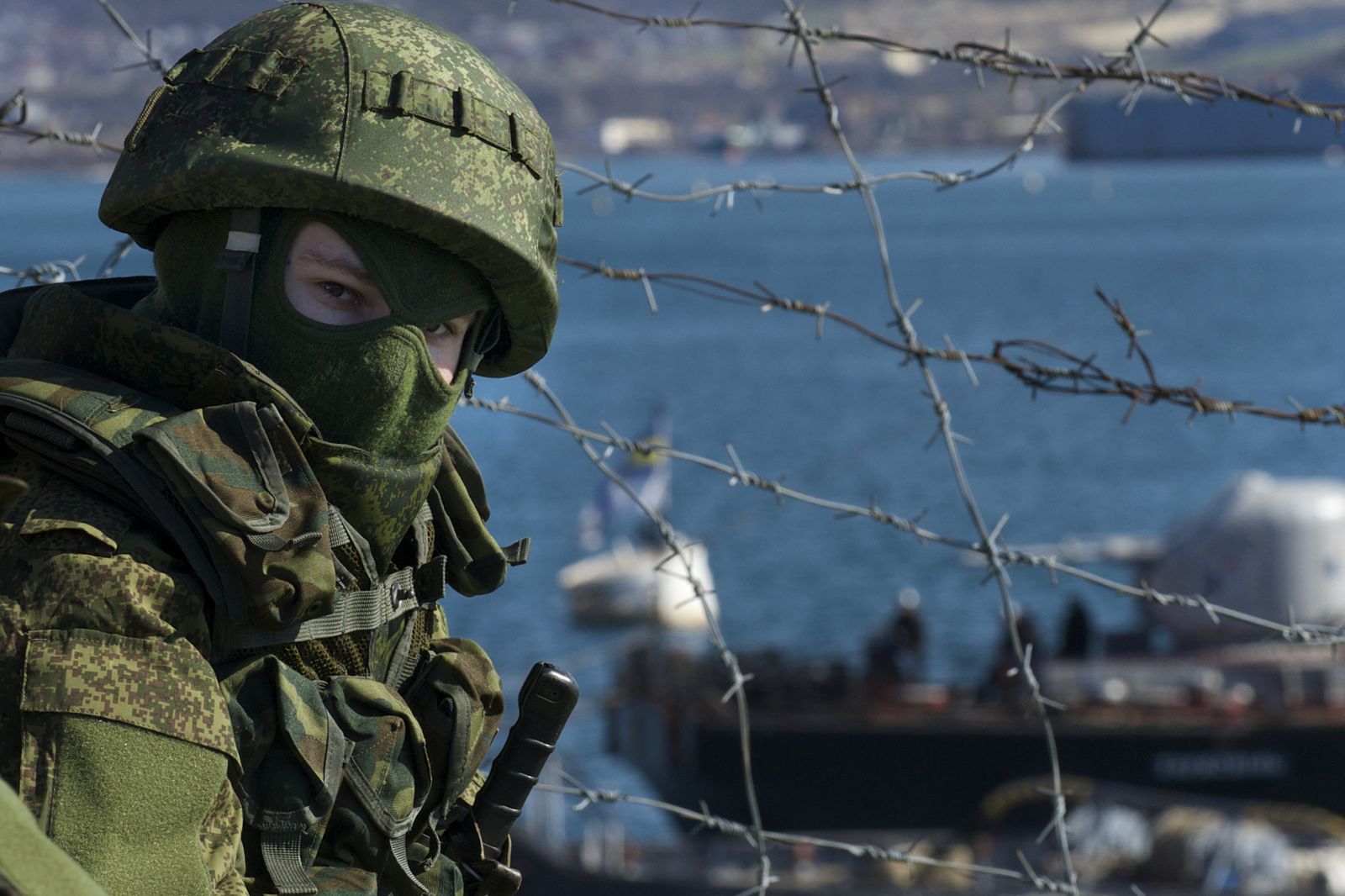 A Russian soldier at Sevastopol on the Crimean Peninsula in Ukraine. Europe is trying to come up to a response to Russian aggression there.