Romania has long had a love-hate relationship with Traian Basescu. A former ship captain who is notorious for his salty language and gruff mannerisms, the Romanian president was first elected in 2004 before quickly losing his way in Bucharest's maze of corruption, intrigue and influence. He was suspended from office in 2007.

This month, history seems to be repeating itself. Basescu, who ultimately avoided impeachment five years ago and was re-elected in 2009, is once again facing proceedings to remove him from office after Romanian parliament suspended him on Friday. His political opponent this time is the country's new prime minister, the Social Democrat Victor Ponta. And Europe is paying particularly close attention due to concerns that Ponta is bending the rule of law and transforming Romania into another European Union black sheep on the model of Hungary.

"The fundamental principles of democracy, the rule of law and constitutional division of powers cannot be ignored," German Foreign Minister Guido Westerwelle told the Frankfurter Allgemeine Zeitung on Sunday in reference to Romania. He pledged that Berlin "will not ignore" developments in the country and added: "Serious violations of the letter and spirit of European values would raise questions about Romania's readiness to take the last steps toward full integration into the European Union." The country is not yet a full member of the EU's visa-free travel regime.

Merkel added her voice to the criticism on Monday. Following a telephone conversation with Basescu, her spokesman Steffen Seibert said that Merkel finds in "unacceptable when fundamental principles of the rule of law are violated in a European Union country."

Westerwelle and Merkel were only the most recent leading European politicians to have spoken out on the situation in Romania. Last week, European Justice Commissioner Viviane Reding said via Twitter: "I am seriously concerned about recent attacks on the independence of the Constitutional Court of Romania." Specifically, she was referring to comments from the Ponta government that it intended to revamp the court. Ponta ally Crin Antonescu, president of the Senate, said that parliament had the right to remove judges from the court and said its current makeup was "a disgrace."

At the Expense of the Rule of Law

On Friday, the Council of Europe announced it was asking constitutional experts to review Basescu's suspension by parliament, particularly given that Ponta elected to move ahead without waiting for the Constitutional Court's review. Prime Minister Ponta will be travelling to Brussels on Thursday to speak with European Commission President Jose Manuel Barroso about the EU's concerns. Among his talking points will also be Ponta's recent decree changing the rules on impeachment proceedings, making just a majority of those citizens voting in a referendum necessary to remove Basescu from office instead of a majority of the entire electorate.

Still, there aren't many in Romania who are prepared to shed tears for Basescu. The suspended president's approval rating hovers at just 17 percent. A recent survey indicated that 64.3 percent of Romanians plan to vote to impeach him in the July 29 referendum. He has presided over a series of widely unpopular austerity measures, including deep salary cuts and tax increases. Romania is currently dependent on a €5 billion ($6.15 billion) International Monetary Fund aid package to stay afloat.

Most Romanians have seemed recently to be more concerned with staying out of the scorching summer temperatures than pressuring their politicians. Media commentators in the country, on the other hand, have been writing about Ponta's machinations as though a government overthrow were in the works. Their German colleagues join them on Monday.

"Prime Minister Ponta is attempting a quiet coup d'état and is once again raising doubts as to his country's democratic institutions. Romania has long had a credibility problem, particularly due to its rampant corruption, which permeates all levels of the state. That is the reason that the EU has yet to make Romania a full member of the Schengen visa-free travel regime. The country simply isn't reliable. But the verbal protests from Berlin and Brussels aren't enough."

"The case of Hungary offers a blueprint for how the EU should now deal with Romania. Early this year, the EU suspended payment of funds from Brussels because Hungary also seemed to think that it didn't need to adhere to EU rules. Since then, Budapest has reacted to the pressure from Brussels and made the necessary changes."

"Three years ago, Romania -- which is facing significant economic problems -- was forced to apply for help from the IMF. Without the billions in assistance from Washington, Bucharest would likely have rapidly gone bankrupt. Victor Ponta, in other words, should be well aware what a reduction of funds from Brussels would mean for his country."

"It is good and correct that European Union representatives are sounding the alarm on Romania. It is too bad they didn't do so as early and as loudly in the case of Hungarian leader Viktor Orbán. But Europe's Social Democrats must join the criticism of Romanian Prime Minister Victor Ponta. They should not give him the benefit of the doubt because of his own center-left leanings; rather they must criticize his deficits. The Romanian people need the European Union to demand that their leaders adhere to democratic principles."

"The EU must clearly take a position -- not for one protagonist against the other, but in favor of democratic institutions and the rule of law. Otherwise, the credibility of the entire political union is at stake."

"There is a danger that the EU, as it so often has done in the past, will fail to speak with a single voice to Bucharest and will fail to stop the machinations of the socialist prime minister. Social Democrats in the European Parliament have thus far remained largely quiet. Parliament President Martin Schulz, himself a Social Democrat, said that Ponta's behavior thus far has not violated any EU treaties. It seems legitimate to speculate as to whether Schulz would have been more critical were Ponta from the conservative political camp."

"It has once again become apparent that, when dealing with the comparatively young EU democracies, party affiliation all too often determines how intensely they are criticized. In the example of conservative Hungarian Prime Minister Viktor Orbán -- who sought to severely limit press freedoms in his country -- Europe's center-right politicians were conspicuously inconspicuous. But it is young democracies first and foremost that need clear messages, independent of party affiliation."

"The suspension of the president by the parliament on Friday evening was a clear violation of the constitution, which says that only 'serious violations of the constitution' are enough to justify impeachment proceedings. The Constitutional Court's evaluation of the impeachment motion didn't find a single instance in which Basescu had made himself guilty of such a violation. Nevertheless, the parliament exercised the will of the party in a session that had clear characteristics of a humiliating show trial."

"Since the government of Victor Ponta took power, the separation of powers has become fluid. Parliament has taken it upon itself to both make and interpret laws. The government is abusing the instrument of emergency decree. And opposition politicians are being placed under tremendous pressure." 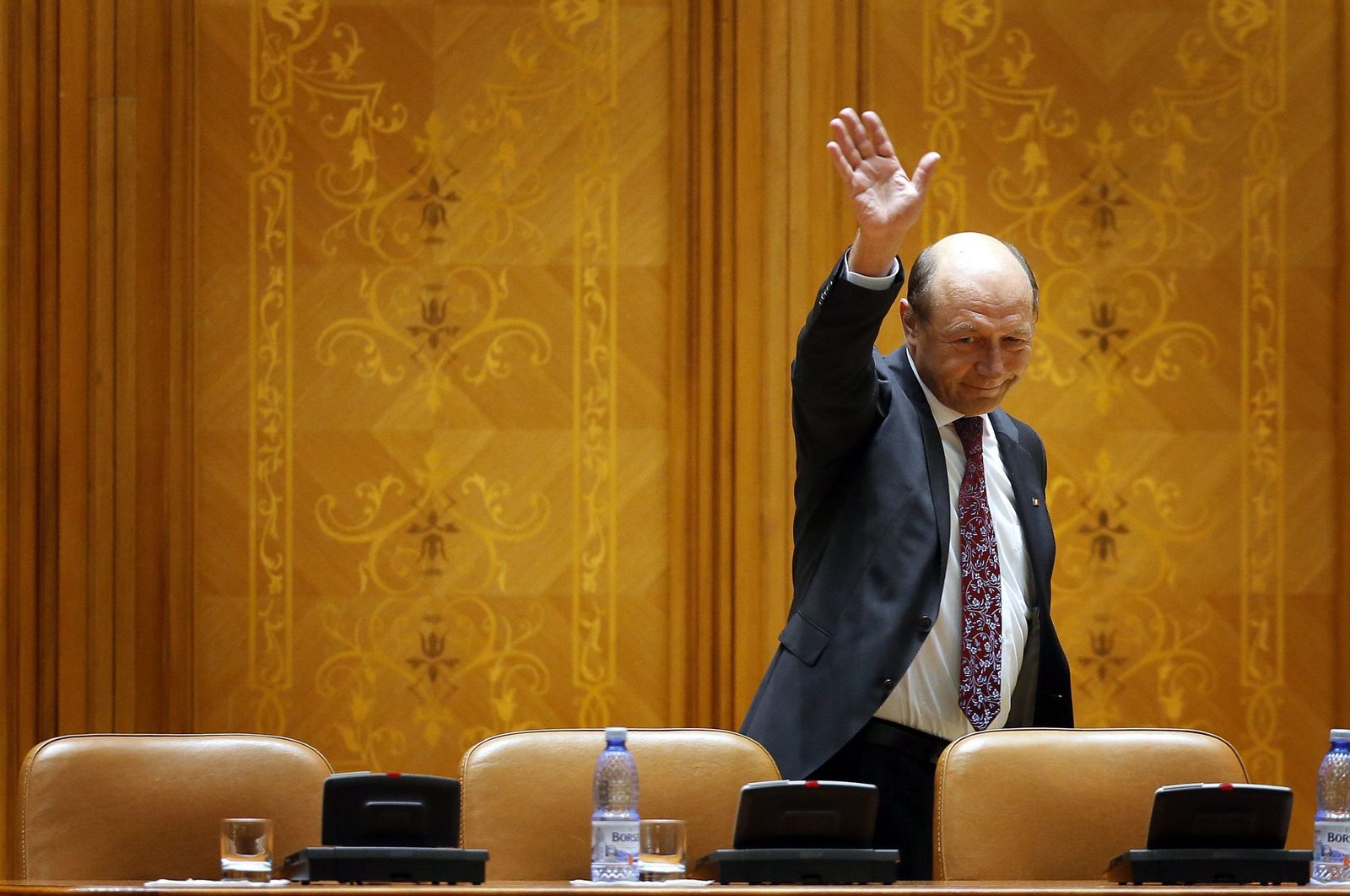 Romanian President Traian Basescu was suspended from office on Friday pending the results of an impeachment referendum at the end of this month.