When Günther Oettinger enters the Polish parliament, the Sjem, dozens of cameras immediately turn toward him. A journalist calls out a question to him in German, demanding to know if he hopes to change anything in terms of "regional subsidies." The question is rather technically formulated, but no matter how Oettinger responds, his answer is guaranteed to be big news here in Poland. After all, the question focuses on whether the European Union will continue to pay subsidies to the country if Poland doesn't adhere to the basic principles of the rule of law. And during this visit to Warsaw on March 26, it is a question that follows Oettinger throughout the day.

Oettinger is the European Union budget commissioner. It is hardly the most glamorous of posts, but he is nonetheless treated like an official state guest in Warsaw, and both Prime Minister Mateusz Morawiecki and his foreign minister took time out of their schedules to meet with the Brussels officials. Ultimately, there is a lot at stake for Poland and other Eastern European countries: Namely, what the next EU budget will look like and how much those countries will receive in subsidies.

It possible there will be significantly less money from subsidies than in the past -- and the blame for that lies with the government in Warsaw. In response to the governing Law and Justice (PiS) party's controversial recent judicial reforms, which have the potential to make the country's judges compliant to the government, the European Commission implemented legal proceedings under Article 7 of the EU treaty. The proceedings could ultimately strip Poland of its voting rights in EU bodies, at least in theory. But so far, Poland's most powerful man, PiS party head Jaroslaw Kaczynski, has simply ignored Brussels. Now, however, the EU is mulling new leverage the efficacy of which is undisputed. Oettinger's EU budget plans for the period from 2021 to 2027 could finally convince Warsaw to budge.

Negotiations in the EU are never as tough as when money is at stake -- particularly when 1 trillion euros are to be divvied up. The last negotiations between the net payers and the net beneficiaries took over 29 months. The situation is even more difficult this time around because even though the EU wants to spend more money on issues like protecting its external borders, the integration of immigrants and pan-European scientific research, it will have less cash at its disposal following Brexit and the departure of one of its financially strongest member states.

Add to that the question being raised by Oettinger in Warsaw: Should the EU also use the budget to discipline intractable EU member states? The Commission hasn't made a final decision, but Oettinger's own position is clear. And at a Commission meeting last Wednesday, he received broad support for his idea.

The situation at the moment is potentially explosive. Officials in Brussels are tired of transferring billions of euros each year to Eastern Europe only for the recipients to cause headache after headache. The four Visegrad Group countries -- Poland, the Czech Republic, Slovakia and Hungary -- alone have received around 150 billion euros in net subsidies from the EU budget since 2007. But when it comes to taking in refugees or adhering to rulings made by the European Court of Justice, they show the EU the cold shoulder. It is an approach, say officials in Brussels, that is particularly helpful to right-wing populist parties. And the complaint is increasingly being adopted by Chancellor Angela Merkel's government as well.

"The EU is a community of values, not just a single market," says Michael Roth of Germany's center-left Social Democratic Party (SPD), which is Merkel's junior coalition partner. Roth is the senior official responsible for EU policy in the Foreign Ministry in Berlin. "But that also then needs to be reflected in the EU budget," Roth continues. He says that all member states are obligated to adhere to the principles of the rule of law. "If that doesn't happen, then it also has to have an effect on the allotment of EU funds."

The development threatens to further widen the rift between east and west at a time when unity needs to be shown in the wake of the nerve gas attack in Salisbury and the threat of a trade war made by U.S. President Donald Trump. "A fight pitting migration against cohesion and agricultural subsidies against funds for a mutual defense force would divide the EU," Oettinger warned in the Polish parliament. And EU Agricultural Commissioner Phil Hogan also lamented that the rivalry between the east and west is "creeping into the debate."

German Foreign Minister Heiko Maas also expressed concern during a recent trip to Warsaw made immediately after he was sworn in to his new post. The issue of rule of law was one of the items discussed in a meeting with his Polish counterpart Jacek Czaputowicz. "I hope we don't get into a situation where structural funds play any kind of role," Maas said.

But behind closed doors, he leaves no doubt that the German government backs the European Commission's plan to link money and values. The argumentation is simple: If Germany is going to pay more into the EU budget in the future as it has already said it would, then Berlin also wants to have a say in how that money is spent.

Oettinger has happily taken up the issue. "We can only apply our budgetary resources in places where we know that the courts are independent," he told Polish business leaders in Warsaw.

The commissioner is also fully aware of the strength of his threat given that the transfers from Brussels are already calculated into national budgets in the east. For the budget period between 2014 and 2020, EU subsidies comprise 2.6 percent of Hungary's gross domestic product, 2. 4 percent in Poland, 1.8 percent in the Czech Republic and 2.3 percent in Slovakia.

The funds are used in an effort to raise the standard of living in Eastern Europe closer to that enjoyed in the west. It's a success story that the EU's general director for regional policies sought to convey to budget controllers last Tuesday. But what his PowerPoint presentation did not mention is something that is also a part of everyday European life: Controllers frequently find instances of misuse of funding.

The primary reason, says Inge Grässle, the chair of the European Parliament's Budgetary Control Committee, is that the EU does not have the capacity to monitor the use of funds, meaning the benficiary countries must do so themselves. Grässle, who like Oettinger is a member of the conservative Christian Democratic Union party, says it is unsurprising that countries aren't particularly eager about exposing abuses back home.

Last September, for example, Grässle and her team traveled to Budapest, where, in addition to talks with the government, the visit included a ride on a narrow-gauge railway. The train didn't have many passengers, but it did travel through an area near Prime Minister Viktor Orbán's hometown, a circumstance that raised suspicion among controllers.

Problems began cropping up even during the trip's planning stages. "The preparation and organization of the mission was rendered difficult by the initial lack of cooperation from the Hungarian Authorities," a later parliamentary report on the visit states. The report was also devastating in its conclusion that "public spending in Hungary suffers from a lack of transparency and corruption risk in public decision making is perceived to be high."

Now, a new multi-billion-euro corruption scandal has created additional pressure for Orbán. The daily newspaper Magyar Nemzet recently reported on a Hungarian man who is in the FBI's witness protection program in the United States. The witness reportedly told the FBI about a massive money laundering operation in which up to 4 billion euros in EU subsidies were smuggled out of the country. According to the story, the money trail reaches into the upper echelons of Orbán's political party Fidesz.

The situation is even tenser in Slovakia, particularly after the murder of journalist Ján Kuciak and his fiancée. Kuciak had learned through his reporting that EU money was apparently seeping into mafia channels. A hastily organized European Parliament delegation visited the country in early March on the search for answers to a long list of questions. But the Slovakian government did not appear particularly eager to clear things up. On one occasion, there was no simultaneous interpreter on hand, and on another, according to the report on the trip, the Slovakians tried to prevent all of the delegation from being present at talks.

As such, Grässle's conclusions aren't all that surprising. "I would like to see stronger instruments in the next multiannual financial framework, and a link to the issue of rule of law is appropriate," she says.

Oettinger has been hard at work on the issue for quite some time and last Wednesday, he presented initial details at an internal Commission meeting. The idea isn't free of controversy given the fears some have that such a move could backfire if the citizens of the countries in question ultimately paid the price of any punitive action taken by Brussels.

In order to get around that problem, it appears Oettinger wants to take advantage of tendering procedures. Normally, EU member states pay the costs of EU-financed projects up front and they are later reimbursed by Brussels. But this repayment in the future would be capped if rule-of-law violations are found in a country.

The threat is already having a certain effect, as the procedures currently underway against Poland have shown. For months, Poland had stonewalled the European Commission, but more recently, the Poles have, for the first time, indicated that they would be prepared to make some changes to the judicial reform. They submitted three proposals to Brussels. One would entail equalizing the minimum retirement age for men and women after the EU had rebuked the Polish government on this point, saying the rules in place were discriminatory.

The assessment in Brussels is that this doesn't go nearly far enough in meeting the EU's demands, but many believe that the suggestions for improvement are only a preliminary signal. "Others will follow," said one EU diplomat.

One reason could be because the incentive for the Polish government to fall back into line might be greater than previously thought. If Poland relents, Oettinger told a small group in Warsaw, then he could refrain from including a rule-of-law clause in his budget framework or drop it at a later date. Officially, the Commission is denying such a link, but diplomats with knowledge of the issue confirmed to DER SPIEGEL that such a correlation has, in fact, been established.

It would be a deal where everyone emerged victorious: the EU, because it ultimately lacks the votes to issue sanctions against Poland (given that Hungary has already announced it would use its veto); the Polish government, because it would return to the EU's good graces; and Foreign Minister Maas, who would be freed from the uncomfortable position of having to maneuver between Brussels and Warsaw.

Berlin is encouraged. Although Warsaw has so far only raised the prospect of cosmetic changes to the judicial reforms, the German government is nevertheless saying that the discussion of the next EU budget framework is producing the first results. "Our talks," says senior Foreign Ministry official Roth, "are having an impact." 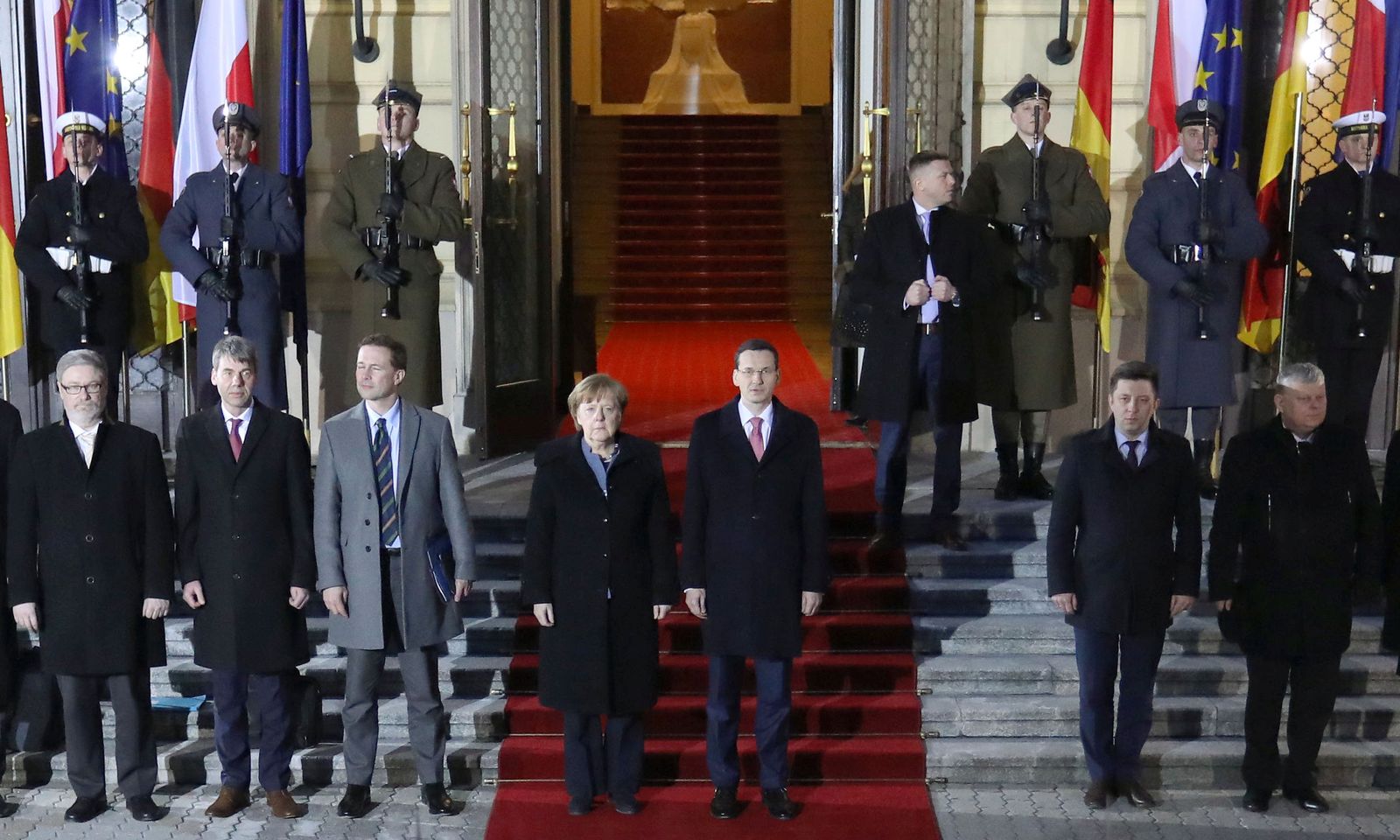 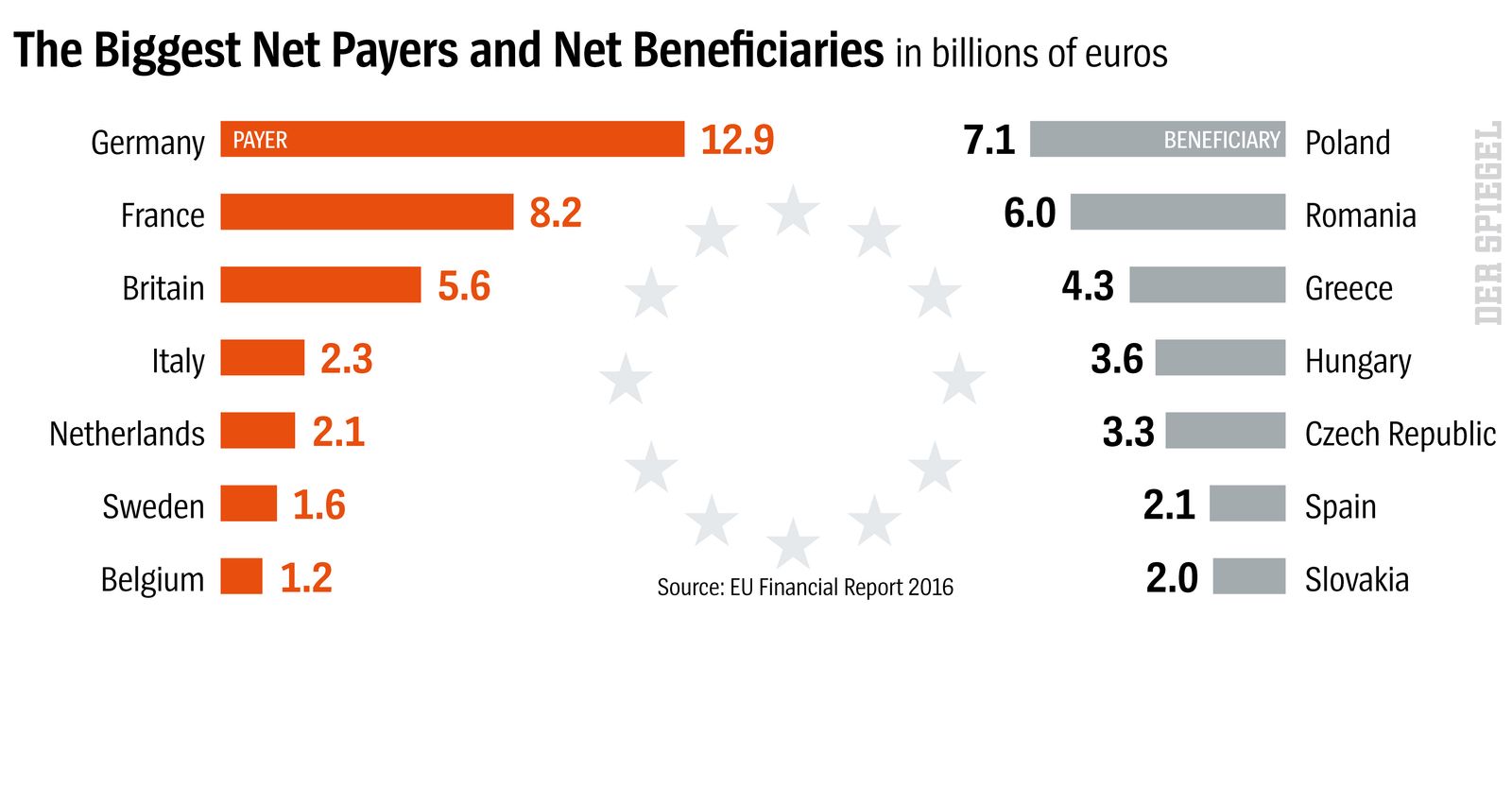