BASF, the world's largest chemical group, is primarily known for its paints, state-of-the-art plastics and perhaps its natural gas dealings with Russia. The down-to-earth managers at the company's headquarters in Germany's Palatinate region have occasionally criticized the greedy banking sector, but otherwise have quietly gone about their business of generating billions in profits. But innovation isn't the only source of BASF's profitability.

The chemical group, based in Ludwigshafen in southwestern Germany, has a large tax department, whose work consists partly in moving money around between continents. But now the company has discovered a tax haven right at home in Europe.

In addition to a large plant, the company operates the BASF Belgium Coordination Center in Antwerp. Some 160 employees at the center spend a portion of their time searching for legal ways to reduce BASF's tax bill. In 2011, the company paid taxes on its many millions in profits at a rate of only 2.6 percent.

BASF is by far not the only company to take advantage of favorable tax conditions in a neighboring EU country to improve its bottom line. Volkswagen, currently the most profitable company in Germany, was even greedier. In 2012, Belgian subsidiary Volkswagen Group Services paid no taxes at all on profits of €153 million, and in the previous year it raked in €141 million in tax-free profits -- and it was all completely legal.

Again and again, major European multinationals manage to take advantage of loopholes in national tax laws. They outwit the tax authorities in different EU countries by moving around their capital and profits, and not just to faraway tax havens in the Caribbean, but to nearby countries like Belgium, Ireland and the Netherlands.

Many EU governments are tired of watching this tax carousel and want to do something about it. With Europe in the grip of a recession, government debt is limiting many governments' options while aid packages for crisis-stricken countries are straining euro-zone budgets.

When European Council President Herman Van Rompuy hosts a summit in Brussels next week, the subject of fair taxation will be at the top of the agenda. Many European leaders now realize that EU countries will have to coordinate their tax policies more tightly if they hope to put an end to tax flight.

There has never been a more favorable time for tax reform. Europeans are outraged over several cases of high-profile tax fugitives, including that of FC Bayern President Uli Hoeness in Germany, who stashed away millions in Switzerland, and French actor Gérard Depardieu, who acquired houses in Belgium and Mordovia, as well as Russian citizenship, to avoid paying taxes in France.

Nevertheless, there are strong national forces resisting change, as was evident at a meeting of EU finance ministers last Tuesday. Their goal was to adopt a guideline on the taxation of interest income, but Luxembourg and Austria refused to play along. As a result, tax flight is still possible with the help of anonymous foundations, life insurance policies and other income from capital.

The two countries did agree to EU negotiations over a tax treaty with Switzerland, San Marino, Andorra, Liechtenstein and Monaco. But they are still unwilling to give up their banking secrecy laws, and they also voted against the automatic exchange of data with other EU countries.

After the meeting, EU Tax Commissioner Algirdas Šemeta said he was "very disappointed." He is now pinning his hopes on Europe's heads of state and government. But even if a breakthrough is achieved at the EU summit on the issue of prosecution of individual tax offenders, Europe's leaders will do little more than pay lip service to the issue of corporate taxation.

And yet action is urgently needed on this front. According to European Commission estimates, EU countries lose €1 trillion ($1.3 trillion) a year to tax evasion and avoidance. The German treasury alone is deprived of €160 billion in this way, says Norbert Walter-Borjans, finance minister in the western state of North Rhine-Westphalia.

The majority of the money is lost as a result of manipulation by international corporations, "which deliberately take advantage of loopholes in the law," says Borjans.

There was great outrage when Cyprus choked on its oversized banking sector, with German Finance Wolfgang Schäuble declaring the island's "business model" a failure. In reality, tax dumping is part of the core business of some EU countries.

Tough competition over the most favorable business tax has been raging for years. The average rate in the EU has dropped from 35.3 percent in the mid-1990s to 23.0 percent today, according to a recently released joint report by Eurostat, the European Union's statistics office, and the European Commission. Bulgaria has the most attractive business tax rate, 10 percent, while Ireland and Cyprus both have a rate of 12.5 percent. With a 15-percent business tax, Latvia and Lithuania also offer attractive investment conditions.

But official rates often say little about the true scope for tax trickery. In theory, companies pay a 35-percent tax in Malta, but a large number of discounts and rebates bring the real rate down to 5 percent.

Belgium has come up with a special instrument to attract companies. It allows countries to claim something on their tax returns that doesn't actually exist: interest on a company's equity capital.

This creates a large incentive for companies, including German businesses, to legally move large amounts of capital across the border to Belgium, because declaring the capital there reduces their tax burden. The tax-free money can later be moved back to Germany.

Companies are predictably keen to exploit that loophole. In 2011, pharmaceutical company Bayer, based in Leverkusen near Cologne, doubled the equity capital of its Belgian subsidiary, bringing it to more than €8 billion. The effort paid off. According to a figure released by the Belgian central bank, the Bayer subsidiary paid only €10.8 million in taxes on pre-tax profit of €254.8 million.

The pharmaceutical giant managed to bring down its tax rate to 4.25 percent. Even the company admits: "Bayer, like other companies, takes advantage of the favorable macroeconomic climate in Belgium created by the withdrawal of risk capital."

Other flagship German companies, like Henkel, Südzucker and fertilizer manufacturer K+S use different options to cash in their profits in Belgium while paying minimal taxes.

But BASF remains the champion among German companies using Belgium to save on taxes. The chemical group furnished its coordination center in Antwerp with €14 billion in capital so that it could fund international corporate activities in the United States, for example. The purpose of the detour through Belgium is that the country allows companies to declare high, fictitious interest payments.

In 2011, the coordination center was able to transfer a large dividend of €116 million to the BASF Antwerp subsidiary. Under Belgian law, 94% of that dividend is now tax-free. And the €488 million in profits earned by the Belgian BASF subsidiary through the sale of a subsidiary remain completely tax-free.

Although the company confirms all of these figures, it also cites its own calculation, stating: "If we eliminate the tax-free dividend and the capital gain, the €455 million in remaining profits on BASF Antwerpen's operational business in 2011 are taxed at more than 30 percent." What this really means is that once all possible deductions are taken into account, the tax rate is perfectly normal.

The Netherlands is also especially popular among German companies. The system there works like this: A company's main office establishes a Dutch offshore company. The main office then pays the Dutch company license fees, which are tax-exempt in the Netherlands. In this manner, the parent company reduces its profits in its home country and pays fewer taxes.

The Netherlands' attractions for foreign capital are reflected in the level of direct investment. In late 2012, the kingdom posted, according to Organization for Economic Cooperation and Development (OECD) figures, $3.5 trillion in foreign investments, of which only $573 billion flowed into the real economy, while the rest went to shell companies. There are an estimated 23,000 of these firms in the Netherlands.

There have been many attempts in the euro zone to structure business taxes fairly and uniformly. In 1998, the Austrian government placed the issue on the agenda of a meeting of EU finance ministers. "The differences in the tax systems of the member states are becoming increasingly important for investment decisions," an official noted at the time.

The introduction of the euro intensified this conflict. In the past, governments could improve competitiveness by devaluing their national currencies. Because this is no longer an option in the monetary union, the easiest way to improve a national economy's standing is by cutting taxes on companies.

At the time, experts proposed imposing lower and upper limits on corporate income tax rates. "What sort of socialism is that?" Germany's Economics Minister at the time, Günter Rexrodt, a member of the business-friendly Free Democratic Party (FDP), said angrily on the sidelines of a European Council meeting.

There are different politicians in office now, but the arguments haven't changed. "There can be no lower limit or upper limit," says Luxembourg Finance Minister Luc Frieden. "Each country must decide for itself how much tax a company should pay. A certain amount of tax competition is necessary."

"I'm opposed to harmonization at a high level," says Austrian Finance Minister Maria Fekter. "I support tax competition. It's in the national interest to structure the tax system in such a way as to make a country more attractive to businesses."

And so the tax carousel keeps on turning. Even a crisis-ridden country like Portugal, which has €78 billion in bailout loans to repay, has reduced its business tax. A few weeks ago, British Chancellor of the Exchequer George Osborne announced that the country's Corporation Tax is being reduced to 20 percent, which would be the lowest rate among all G-20 countries.

The British intend to address the aggressive financial optimization of companies and the super-rich with international treaties. They have placed the issue on the agenda of the G-8 summit in mid-June, which US President Barack Obama is expected to attend.

The British and the Americans advocate a system involving the automatic exchange of data between tax authorities. Switzerland has bowed to intense pressure and made that concession to the Americans. The British have convinced tax havens in the Caribbean, like the Cayman Islands and the British Virgin Islands, to agree to similar programs.

The idea of a large-scale exchange of data is also gaining traction in the EU. Last week, 17 EU countries, including Germany, Belgium and the Netherlands, announced their willingness to exchange tax-related data on private individuals and companies in the future.

There probably will be more transparency in the end, but there are no signs that aggressive tax competition among the member states will end. The draft of the conclusions for the EU summit includes the promising statement that the "Code of Conduct" task force will be asked to submit proposals. But it's been doing that for a long time -- for more than 15 years, to be precise. 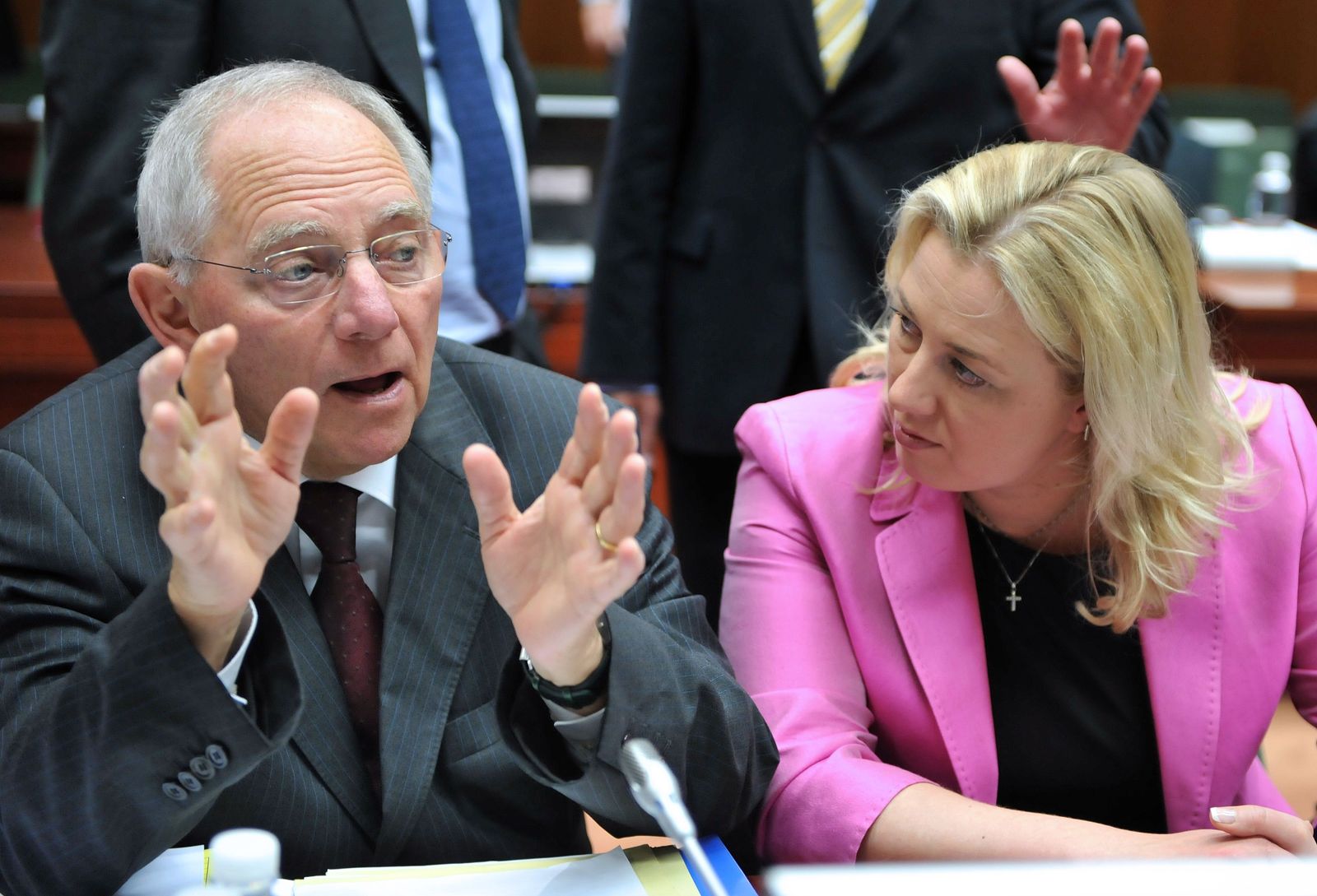