The continuing struggle of Dutch border towns against drug tourism could soon take a new turn, as the European Court of Justice (ECJ) prepares to hand down a ruling regarding one of the most severe measures employed in this battle so far.

Last Thursday, the ECJ heard arguments in Josemans v. Maastricht. The case dates to 2006, when authorities found two foreign nationals on the premises of Easy Going, a coffee shop that sells cannabis. Maastricht is the largest city in the far south of the Netherlands; it sits directly on the Belgian border and is only a 30 minute drive from Germany. The Easy Going coffee shop there is owned by Marc Josemans, who is also the chairman of a branch association to which the city's coffee shop owners belong.

Law enforcement officers found the two foreigners shortly after a municipal regulation had gone into effect prohibiting the presence of foreigners in coffee shops. It remains the only time the city has enforced the new law as the municipality awaits the outcome of the ECJ case. In the Netherlands, the case has made its way up to the Council of State, the highest Dutch court ruling on such matters. Before the European Court gives a ruling, the council has asked it whether distinguishing between local and foreign cannabis customers isn't at odds with the underlying principles of the European Union's internal market.

In a weird legal twist, the case has led to a clash between the EU's laws governing free trade among member states and Holland's soft-drug policy. For decades, the Netherlands has had a unique policy governing soft drugs, effectively decriminalizing -- though not legalizing -- the use of cannabis. The sale of soft drugs through coffee shops is strictly regulated: Advertising is not allowed, for example; nor is selling to underage customers.

On the other hand, the European Union guarantees a free, unified market of goods and services among its members. Whether this should apply to the semi-legal parts of the Netherlands' cannabis industry is the question now up for debate.

André Beckers, Joseman's legal counsel, has argued it should. He claims cannabis is an economic commodity like any other. Beckers has shown that Easy Going, one of Maastricht's 14 coffee shops, expects to sell €10 million worth of cannabis this year, in addition to the €500,000 it stands to make from "normal" activities, such as selling coffee. Because of the illegal nature of some of its business, a coffee shop is under no obligation to pay sales tax on the cannabis it sells, but Easy Going is required to pay income tax, employee benefits, corporate tax and value-added tax on its legal revenues. The lawyer also cited a recent study which found coffee shops indirectly added €140 million and 1,370 jobs to the Dutch economy.

Sander Lely, an attorney for the city, countered that trade in contraband could never be covered by regulations governing the common market. "That some of its revenue is generated through the sale of legal products is irrelevant," Lely said. He was supported in his argument by both Dutch and Belgian representatives.

Hubert van Vliet, a representative of the European Commission, pointed out the possible consequences if the ECJ found coffee shops were not covered by EU laws. "Everything pertaining to coffee shops would then be exempt," he argued. "What will that mean for the border workers employed there? The free flow of capital would also be affected, which means only Dutch nationals would be allowed to own coffee shops."

Lely and the representative of the Dutch state argued that the exclusion of foreign nationals from coffee shops was not merely a matter of Dutch self interest, but also important for the maintenance of public order in other EU member states. "The Netherlands is subject to international pressure in this respect," said Corina Wissels, the Dutch representative. Approximately 70 percent of the 2 million people who visit a Maastricht coffee shop each year are from foreign countries, mainly Germany, France and Belgium. The Belgian representative asked the court to consider the nuisance caused by French drug users traveling through Belgium, drug runners and users returning home driving under the influence.

Arguing for the European Commission, Van der Vliet referred to an earlier ruling by the ECJ concerning Polish prostitutes in the Netherlands. In that case, the court ruled that a member states could not apply one set of business laws to its own citizens and another set to other EU nationals. "The European Commission does not oppose a test case in itself," he said. "But why haven't less far-reaching measures been tried first, such as a customer-card system, reducing the maximum amount available to single customers or requiring customers to consume purchased wares on the spot?"

The judges expressed surprise over the Dutch drug policy. They asked what the coffee shop's permit was for exactly, if the sale of cannabis was technically illegal in the Netherlands. The court also wondered who supplied the drugs on sale to the coffee shop. The state perhaps?

The ECJ declined to schedule a specific date for its ruling. It did, however, promise to process the case quickly. A definitive ruling by the Dutch Council of State is expected before the end of this year. The case will play an important part in the formation of new Dutch soft-drug policy. Mayors of Dutch border municipalities have also said they would await a ruling by the Council of State before experimenting with customer cards for cannabis users. 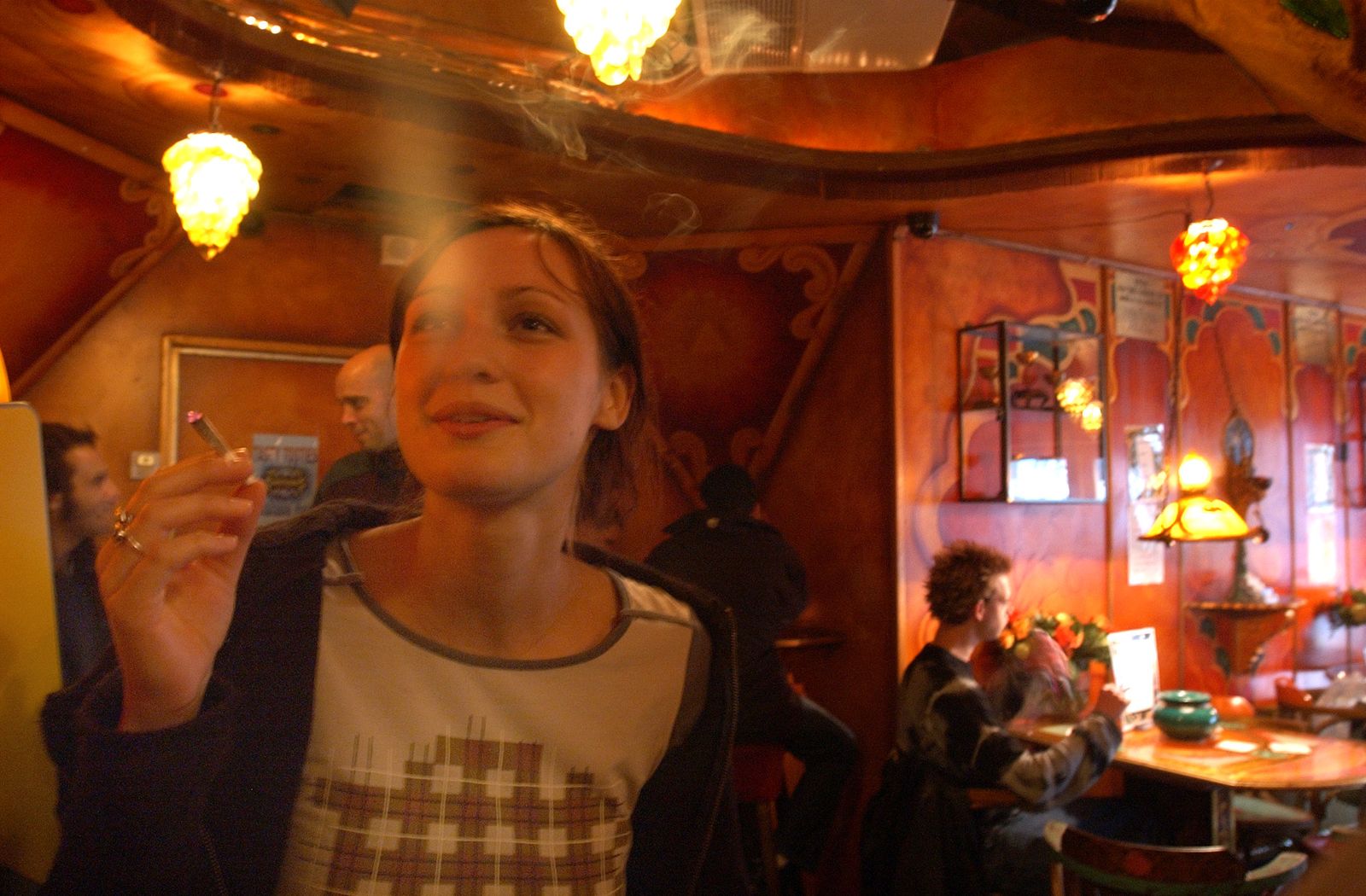 Do Dutch cannabis laws apply to EU free-trade regulations? A tourist smokes marijuana in a coffee shop in Amsterdam.