It will be the 17th European Union summit in the last two years focused on the ongoing debt crisis on the Continent. And it may be the most difficult one yet -- at least when it comes to getting there.

With Chancellor Angela Merkel, French President Nicolas Sarkozy and 25 other heads of state and government from across Europe set to arrive in Brussels in the early afternoon, disgruntled Belgian workers have chosen Monday for a nationwide strike. The work stoppage -- which has left travelers stranded and the public transport system at a standstill -- started late on Sunday and is set to continue for 24 hours. Workers are protesting deep austerity measures passed in the country, similar to belt-tightening packages that have triggered social unrest across the Continent.

Some measure of relief, though, may be in sight. With several European economies suffering because of the far-reaching consolidation policies put in place last year, leaders are reportedly hoping to agree on a summit communiqué calling for "growth-friendly consolidation and job-friendly growth." According to Reuters, EU leaders may announce their intention to use €20 billion ($26 billion) of unused funds from the 2007-2013 budget to promote job creation programs.

But that is likely to be just a footnote in a summit that, in addition to passing Chancellor Angela Merkel's fiscal pact mandating budgetary discipline, will almost certainly focus on the ongoing problems in Greece.

And those problems, it would seem, are only getting worse. SPIEGEL has learned that the so-called troika, made up of the European Commission, the European Central Bank and the International Monetary Fund, now believes that Greece requires €145 billion in aid money to remain solvent through 2014, fully €15 billion more than the €130 billion bailout package currently being negotiated between the EU and Athens. The increase is largely a function of Greece's struggling economy, which performed even worse than expected in 2011.

The EU-Athens talks are becoming more embittered as a result. On Friday, the Financial Times reported that Germany had proposed imposing an external "budget commissioner" to ensure that Athens was implementing all austerity measures it has committed to. The proposal foresees granting the commissioner the power to veto Greek tax and spending decisions. Germany's vice chancellor, Philipp Rösler, threw his support behind the idea in an interview with the mass-circulation tabloid Bild.

Reaction in Athens has been hostile to the idea. Implementing such a budget overseer, said Greek Finance Minister Evangelos Venizelos, "ignores some key historical lessons." Others in the Greek capital have said such a move would be an unacceptable violation of the country's sovereignty.

Still, despite months of austerity promises and EU frustration at the lack of progress in Greece, the situation has yet to improve. Athens has announced that it is at the brink of a debt-relief agreement with its private creditors, but the final details have not yet been announced. Many expected the deal -- which aims at a 50 percent debt haircut worth €100 billion -- to be sealed in mid-January. But the talks with the International Institute of Finance (IIF), which is representing banks that hold Greek sovereign bonds, have been slow and difficult. And they are not expected to be completed before Monday's summit begins -- despite a successful debt-relief deal being a prerequisite for a second EU aid package.

Perhaps more disturbing is the lack of progress on austerity measures long-since passed. Attempts to privatize state-owned enterprises, for example, have met with limited success at best. The Greek government initially announced it intended to raise €50 billion in four years by selling state-owned companies and property -- a sum that was calculated into the country's financing needs.

But lack of interest has crippled the program. In 2011, the government's privatization program brought in just €1.7 billion instead of the €5 billion planned. In 2012, expectations have been reduced from €11 billion to just €4.7 billion. Government-owned enterprises in Greece are simply not competitive enough to attract investors.

Despite the ongoing difficulties encountered in Greece, though, there is some measure of optimism that there may be a tiny flicker of light at the far-away end of the tunnel. A year ahead of schedule, the EU leaders on Monday also plan on sealing the agreement to introduce the permanent euro backstop, the European Stability Mechanism (ESM). Furthermore, there is some indication that Berlin may be willing to reconsider its opposition to increasing the size of the fund over the current €500 billion.

That, combined with tight fiscal discipline and efforts at improving productivity in the EU could be a recipe for slowing the debt crisis, some say. "The fiscal compact and the ESM will shape a better future," Carsten Brzeski, a euro-zone economist with ING, told Reuters. "Combined with ongoing austerity measures and structural reforms in peripheral countries, and, of course, with a lot of ECB action, the euro zone could master this stage of the crisis." 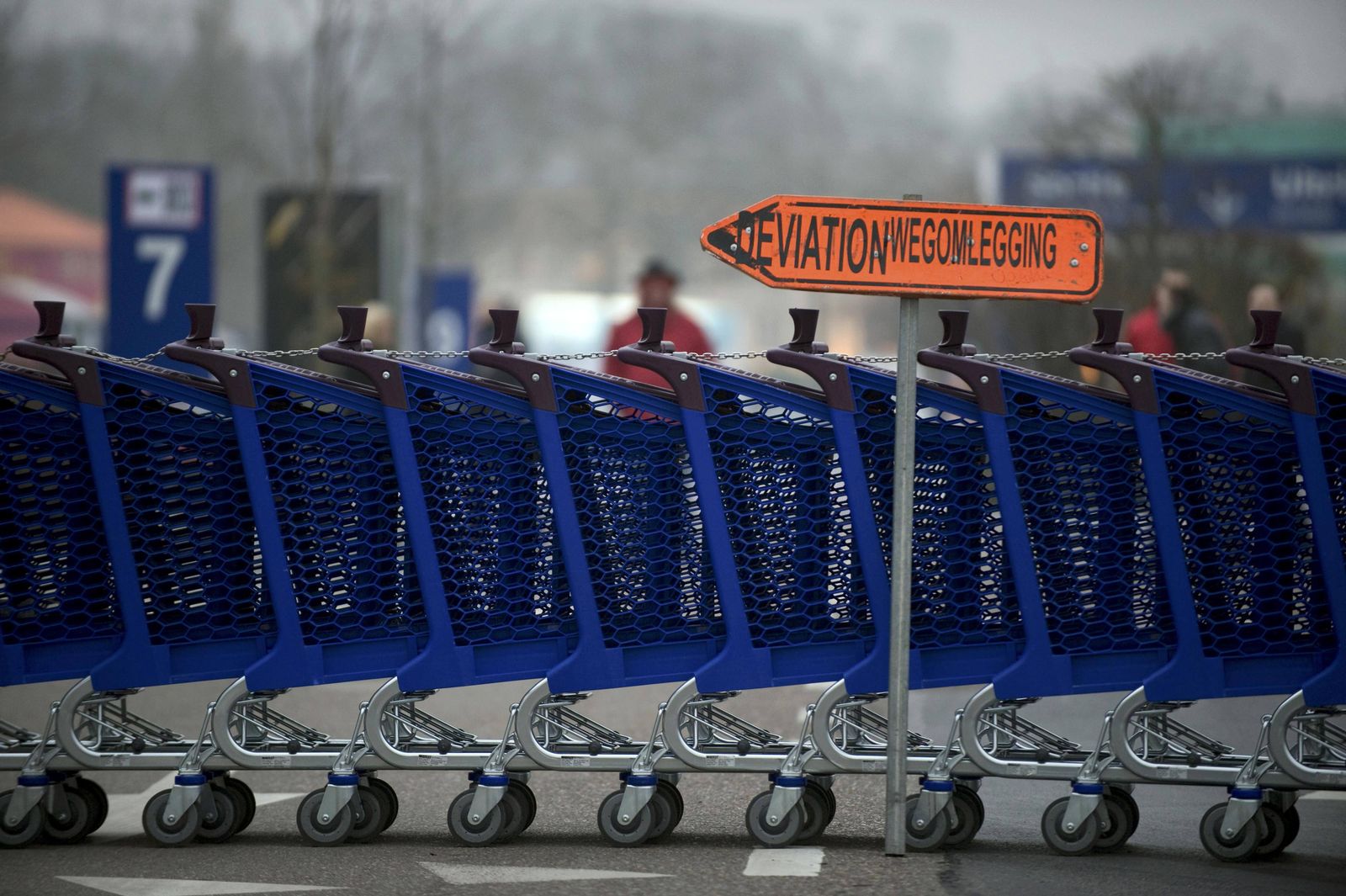 Shopping carts block the entrance to a supermarket in Brussels as part of a 24-hour general strike called to protest austerity measures.