When a bomb exploded on a tourist bus in the Bulgarian Black Sea resort town of Burgas last July killing five Israelis and the Bulgarian bus driver, many immediately suspected that Hezbollah was behind the attack. Israeli Prime Minister Benjamin Netanyahu immediately pinned blame on the Lebanese Islamist Shiite militant group, asserting that the hit had been carried out by "Hezbollah, the long arm of Iran." American intelligence officials privately backed up that claim.

Now, a six-month investigation by the Bulgarian Interior Ministry lends new credibility to the suspicion that it was indeed Hezbollah that executed the fatal attack. Bulgarian Interior Minister Tsvetan Tsvetanov on Tuesday said there were "well-grounded reasons to suggest" that two men who helped plan the bombing -- one bearing an Australian passport and the other a Canadian one -- were Hezbollah members who had been living in Lebanon prior to traveling to Bulgaria.

"We have followed their entire activities in Australia and Canada, so we have information about financing and their membership in Hezbollah," Tsvetanov said at a news conference.

The Shiite group, whose name literally means "Party of God" in Arabic, has rejected the allegations, with a deputy leader stating that this week's announcement was an Israeli plot "to intimidate people and countries against Hezbollah."

The revelations could have major implications for how the European Union deals with Hezbollah, which both the United States and Canada have deemed a terrorist organization. That designation permits both governments to outlaw Hezbollah's activities, freeze its bank accounts and monitor suspected members. Currently, just two EU countries have blacklisted the organization: the Netherlands and the United Kingdom (the latter of which has only banned what it determines to be Hezbollah's "military wing"). Throughout the rest of Europe, Hezbollah members can raise money, stage demonstrations and work unimpeded.

But with a suspected attack on European soil, EU policy toward the organization could soon change. "If the evidence proves to be true that Hezbollah is indeed responsible for this despicable attack, then consequences will have to follow," Steffen Seibert, a spokesman for German Chancellor Angela Merkel, said in Berlin earlier this week. Whatever those consequences, they could deal a significant blow to the organization: A 2011 analysis conducted by Germany's domestic intelligence agency, the Office for the Protection of the Constitution, reported Hezbollah has nearly 1,000 members in the country.

Hand of Iran Looms Behind Hezbollah

Saba Farzan, a German-Iranian journalist and the head of Iran research with the Mideast Freedom Forum Berlin, said it may ultimately be the EU's antagonistic relationship with the Islamic Republic that tips the scales. "Especially since the issue of Hezbollah has a direct linkage to the Iran conflict, it is realistic that those policymakers who really want to act now come out on top," she said. However she added that the internal European debate over Hezbollah is far from over, and that "it remains to be seen if Chancellor Merkel and other heads of state in Europe will speak publicly in favor" of labeling it a terrorist group.

Such hesitancy was echoed by EU foreign policy chief Catherine Ashton, whose spokesperson issued a statement that did not even mention the group by name. "The terrorists who planned and carried out the Burgas attack must be brought to justice," it read, adding that "the High Representative underlines the need for a reflection over the outcome of (Bulgaria's) investigation." Swedish Foreign Minister Carl Bildt ominously tweeted on Tuesday that "we need to reflect seriously on consequences of Bulgarian probe naming Hezbollah as behind terrorist attack."

'Calling It Terrorist Would Limit France's Ties with Beirut'

Opponents of designating Hezbollah as a terrorist organization -- a bloc led by France, Lebanon's former colonial power -- say the group's status as the most powerful political party in Lebanon, in addition to its social welfare work for Lebanese Shiites, is reason to hesitate before banning it as a terrorist outfit.

"Calling it terrorist would limit France's ties with Beirut and put French targets and personnel in Lebanon at risk of retaliation," Claude Moniquet, a former French intelligence official told the Jewish Telegraphic Agency this week. "The Bulgarian report doesn't alter this realpolitik. There were always plenty of smoking guns."

Changing the EU designation would require a unanimous vote by the regional bloc's 27 member states, a move that Washington has repeatedly urged its European allies to take.

Julien Barnes-Dacey, an expert on the Middle East at the European Council on Foreign Relations in London, predicted the EU would be "following the British track, whereby they differ between the political and military wings" of Hezbollah. "Because of the reluctance on the part of European states to fully isolate and sanction Hezbollah, that could be a compromise path forward," he said. But even a half-way measure such as this would be significant, Barnes-Dacey added, because "Hezbollah does give a lot of store to their ongoing relationship and communication with the Europeans. It is important to Hezbollah, it will leave a mark and it will isolate them politically."

Indeed, the Bulgarian Interior Minister seemed to presage just such a distinction by stating that the two men had been members of the group's armed faction. "What we can make as a justified conclusion is that the two persons whose identity we have established belonged to the military wing of Hezbollah," Tsvetanov said at the Tuesday press conference.

For decades, European governments have preferred to avoid confrontation with Hezbollah as long as its terrorism was not directed at continental targets. In spite of a 1983 Beirut bombing that killed 58 French peacekeepers and 241 American Marines, deadly attacks on Israeli and Jewish targets in Buenos Aires in 1992 and 1994 (which Argentine prosecutors pinned on the group), and its military support for the embattled Syrian regime of Bashar Assad (whom the EU has repeatedly called upon to step down), Brussels has resisted naming Hezbollah a terrorist outfit. But now that the Party of God has struck European soil, calls within the EU for a tougher stance against Hezbollah are growing. 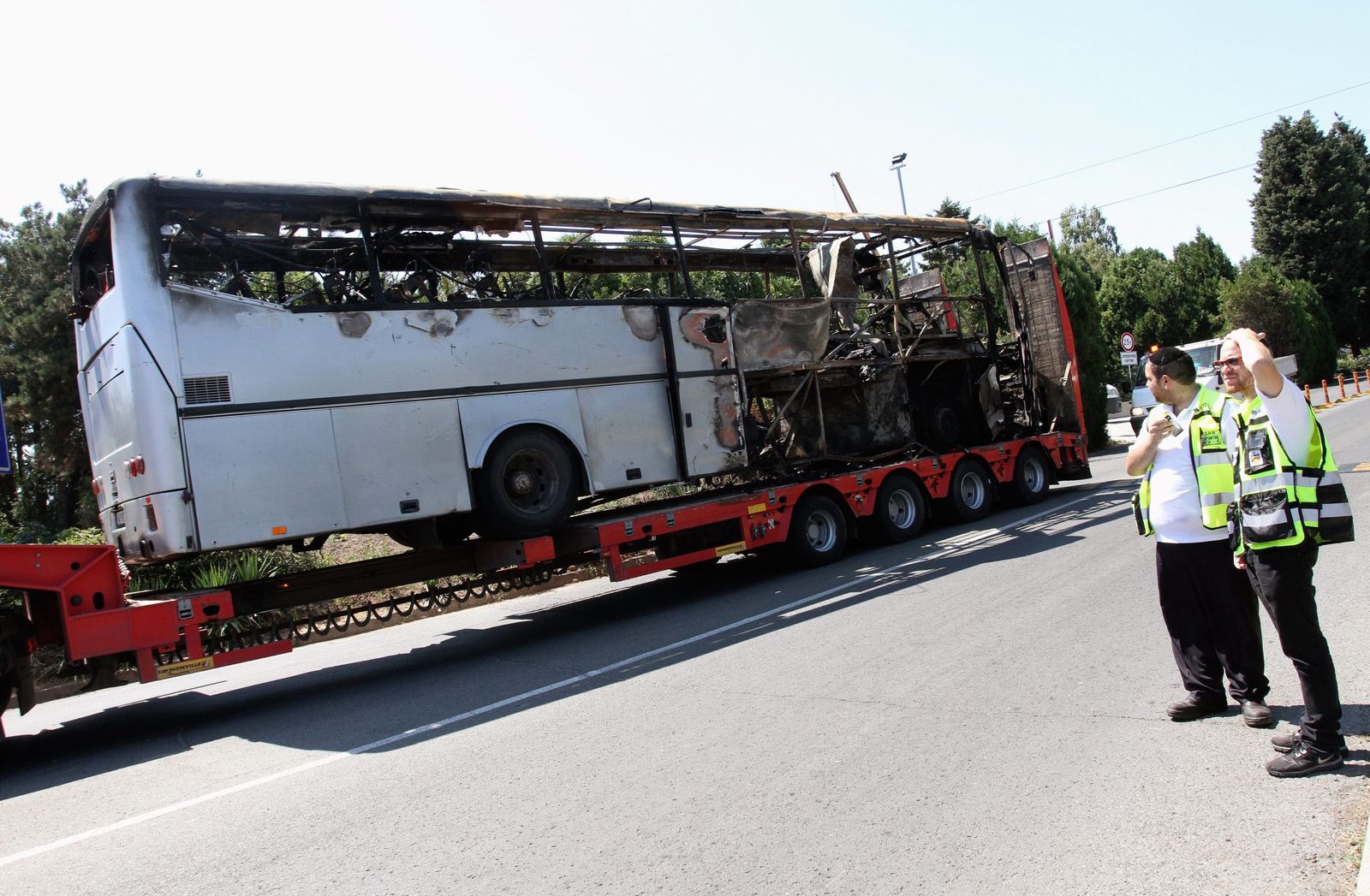 A bus damaged in a terrorist attack on Israeli tourists at Bourgas Airport in Bulgaria on July 19.