The countdown to the end of the traditional light bulb in Europe has begun. On Monday, a panel of European Union experts voiced their support for a European Commission plan to phase out standard, incandescent bulbs by 2012. The formal adoption of the plan is expected to take place in March.

"This groundbreaking measure delivers a clear message about the EU's commitment to reach its energy-efficiency and climate-protection targets," European Energy Commissioner Andris Piebalgs said in a statement released in Brussels on Monday.

The plan envisions the gradual disappearance of incandescent bulbs, first introduced by Thomas Edison 130 years ago. The first to vanish will be the 100-watt bulb, set to disappear from shelves on Sept. 1, 2009. Seventy-five watt bulbs will follow a year later and by autumn of 2012, only energy efficient fluorescent lighting will be available. 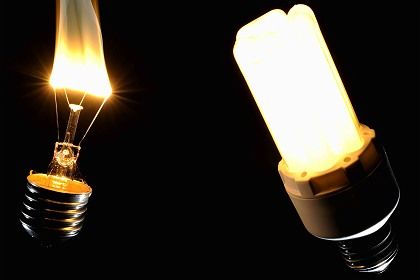 The traditional light bulb is on its way out in the European Union.

As a result of the switch, the EU hopes to make significant cuts to the 27-member bloc's energy consumption. According to Piebalgs, the average European household will save €50 ($64) per year on electricity bills and annual CO2 emissions will be cut by 15 million tons. The Commission estimates that up to 3,000 jobs could be lost in the European Union as a result of the switch. Most incandescent bulbs used in the EU are manufactured within the bloc while most of the new, energy efficient alternatives are made elsewhere.

The switch -- one already made by Australia and underway in Canada -- is one that has long been demanded by environmental groups. Incandescent lamps, though much cheaper to buy, have long been seen as wasteful, with only 5 percent of the energy consumed going to light production.

Nevertheless, many criticize energy-efficient fluorescent lights as not being all they are cracked up to be. A study by the Health Protection Agency in the United Kingdom found that spending too much time in close proximity to a compact fluorescent lamp (CFL) -- the kind that will now replace incandescent bulbs in the EU -- can result in exposure to radiation levels higher than allowed under international guidelines.

Furthermore, CFLs contain mercury and other harmful substances that can be dangerous if the bulb is broken. It is also illegal in many countries, including Germany, to dispose of them in household trash. At present, there is no system for the disposal of such light bulbs in Germany, forcing consumers to take expired bulbs to electronic recycling centers themselves.

Potentially even more concerning, an environmentally oriented German consumer protection magazine in October came to the conclusion that some of the energy-efficient bulbs on the market are hardly better than their incandescent counterparts. According to the controversial study by Öko Test, many of the bulbs tested take at least a minute before they reach their optimal brightness and many of their lifespans are much shorter than indicated by the manufacturers. Furthermore, they are prone to high-frequency flickering, leading to headaches and other complaints, though no concrete proof was offered for this claim.

The test was blasted by environmental groups and by bulb manufacturers. Still, many are asking that CFLs be more closely examined and that issues related to their disposal be addressed.

Furthermore, consumers will have to become much savvier about the energy-efficient lamps now on the market. According to the Öko Test result, one of the most expensive bulbs on the market, the Swiss Lights Classic 68, not only burns out quicker than promised, but it also uses more energy than it is supposed to. Indeed, compared to a traditional 60 Watt bulb, the energy-saving lamp uses 14 percent more energy.