Europeans are furious. Revelations that the US intelligence service National Security Agency (NSA) targeted the European Union and several European countries with its far-reaching spying activities have led to angry reactions from several senior EU and German politicians.

"We need more precise information," said European Parliament President Martin Schulz. "But if it is true, it is a huge scandal. That would mean a huge burden for relations between the EU and the US. We now demand comprehensive information."

Schulz was reacting to a report in SPIEGEL that the NSA had bugged the EU's diplomatic representation in Washington and monitored its computer network (full story available on Monday). The EU's representation to the United Nations in New York was targeted in a similar manner. US intelligence thus had access to EU email traffic and internal documents. The information appears in secret documents obtained by whistleblower Edward Snowden, some of which SPIEGEL has seen.

The documents also indicate the US intelligence service was responsible for an electronic eavesdropping operation in Brussels. SPIEGEL also reported that Germany has been a significant target of the NSA's global surveillance program, with some 500 million communication connections being monitored every month. The documents show that the NSA is more active in Germany than in any other country in the European Union.

EU and German politicians on Sunday, however, were reacting primarily to the revelations that the US had specifically targeted the 27-member bloc with its surveillance activities. "If these reports are true, then it is abhorrent," said Luxembourgian Foreign Minister Jean Asselborn. "It would seem that the secret services have gotten out of control. The US should monitor their own secret services rather than their allies."

Asselborn characterized the operation as a breach of trust. "The US justifies everything as being part of the fight against terrorism. But the EU and its diplomats are not terrorists. We need a guarantee from the very highest level that it stops immediately."

A spokesperson for the European Commission in Brussels said officials had been in contact with US authorities in Washington, DC, and in Brussels and "have confronted them with the press reports. They have told us they are checking on the accuracy of the information released yesterday and will come back to us. We will make no further comments at this stage."

German Justice Minister Sabine Leutheusser-Schnarrenberger, who has been sharply critical of the US since the beginning of the Prism scandal, was furious on Sunday. "If media reports are correct, then it is reminiscent of methods used by enemies during the Cold War," she said in a statement emailed to the media. "It defies belief that our friends in the US see the Europeans as their enemies. There has to finally be an immediate and comprehensive explanation from the US as to whether media reports about completely unacceptable surveillance measures of the US in the EU are true or not. Comprehensive spying on Europeans by Americans cannot be allowed."

Elmar Brok, chairman of the Foreign Affairs Committee in European Parliament added his opprobrium. "The spying has reached dimensions that I didn't think were possible for a democratic country. Such behavior among allies is intolerable." The US, he added, once the land of the free, "is suffering from a security syndrome," added Brok, a member of Chancellor Angela Merkel's conservative Christian Democrats. "They have completely lost all balance. George Orwell is nothing by comparison."

"It is unacceptable when European diplomats and politicians are spied on in their day-to-day activities," said Manfred Weber, deputy head and security expert for the European People's Party, an amalgam of European center-right parties in European Parliament. "Our confidence has been shaken." Weber is a member of the Christian Social Union, the Bavarian sister party to Merkel's CDU.

'Our Trust Is at Stake'

A further Merkel ally in European Parliament, Markus Ferber, accused the US on Sunday of using methods akin to the feared East German secret police, the Stasi. Like Weber, Ferber is a member of the CSU. "A democratic constitutional state that uses Stasi methods sacrifices all credibility as a moral authority," Ferber told the German daily Die Welt on Sunday. "It has destroyed trust."

Guy Verhofstadt, former Belgian prime minister and currently head of the Alliance of Liberals and Democrats for Europe, added: "This is absolutely unacceptable and must be stopped immediately. The American data collection mania, shown publicly with SWIFT and hidden with Prism, has achieved another quality by spying on EU officials and their meetings. Our trust is at stake."

Green Party officials in Brussels are demanding far-reaching consequences. "This is meltdown of the constitutional state," said Jan Philipp Albrecht, a Green Party representative in European Parliament. The NSA engaged in nothing less than "espionage against democratic countries and their institutions," he added. Albrecht was deeply involved in negotiating the EU's own policies on data privacy. He said that no one is safe from surveillance anymore and demanded that the EU open proceedings at the International Court of Justice in The Hague.

Green Party floor leader in European Parliament Daniel Cohn-Bendit went even further. "A simple note of protest is not enough anymore. The EU must immediately suspend negotiations with the US over a free trade agreement," he said. "First, we need a deal on data protection so that something like this never happens again. Only then can we resume (free-trade) negotiations."

Foreign Affairs Committee Chair Brok isn't willing to go quite that far, though he does allow that the free trade deal is endangered. "How are you supposed to negotiate when you have to worry that your negotiating positions were intercepted," he asked.

His views were echoed during a citizens' dialogue in Luxembourg on Sunday by European Commissioner for Justice, Fundamental Rights and Citizenship Viviane Reding who also suggested the revelations could adversely impact trade talks. "Partners do not spy on each other," she said in response to a question from the audience. "We cannot negotiate over a big trans-Atlantic market if there is the slightest doubt that our partners are carrying out spying activities on the offices of our negotiators. The American authorities should eliminate such doubt swiftly."

The spying revelations also look as though they could become an issue in the German election campaign. Peer Steinbrück, the Social Democratic challenger to Merkel, demanded that the chancellor investigate. "The government must clear up the facts as quickly as possible," Steinbrück told SPIEGEL ONLINE. "If the accusations are confirmed, it would go far beyond legitimate security concerns. That would mean that friends and partners were spied on. That would be completely unacceptable."

The targeting of EU representations marks a further expansion of the data surveillance scandal that has surrounded the NSA in recent weeks. New details about Prism and additional surveillance programs have continually come to light thanks to whistleblower Snowden. The British secret service agency GCHQ has a similar spying program called Tempora, according to Snowden, which monitors Internet and telephone connections across the globe.

The US has thus far declined to respond to the revelations printed in SPIEGEL. "I can't comment," Deputy National Security Advisor Ben Rhodes told journalists on Saturday in Pretoria, according to the German news agency DPA. 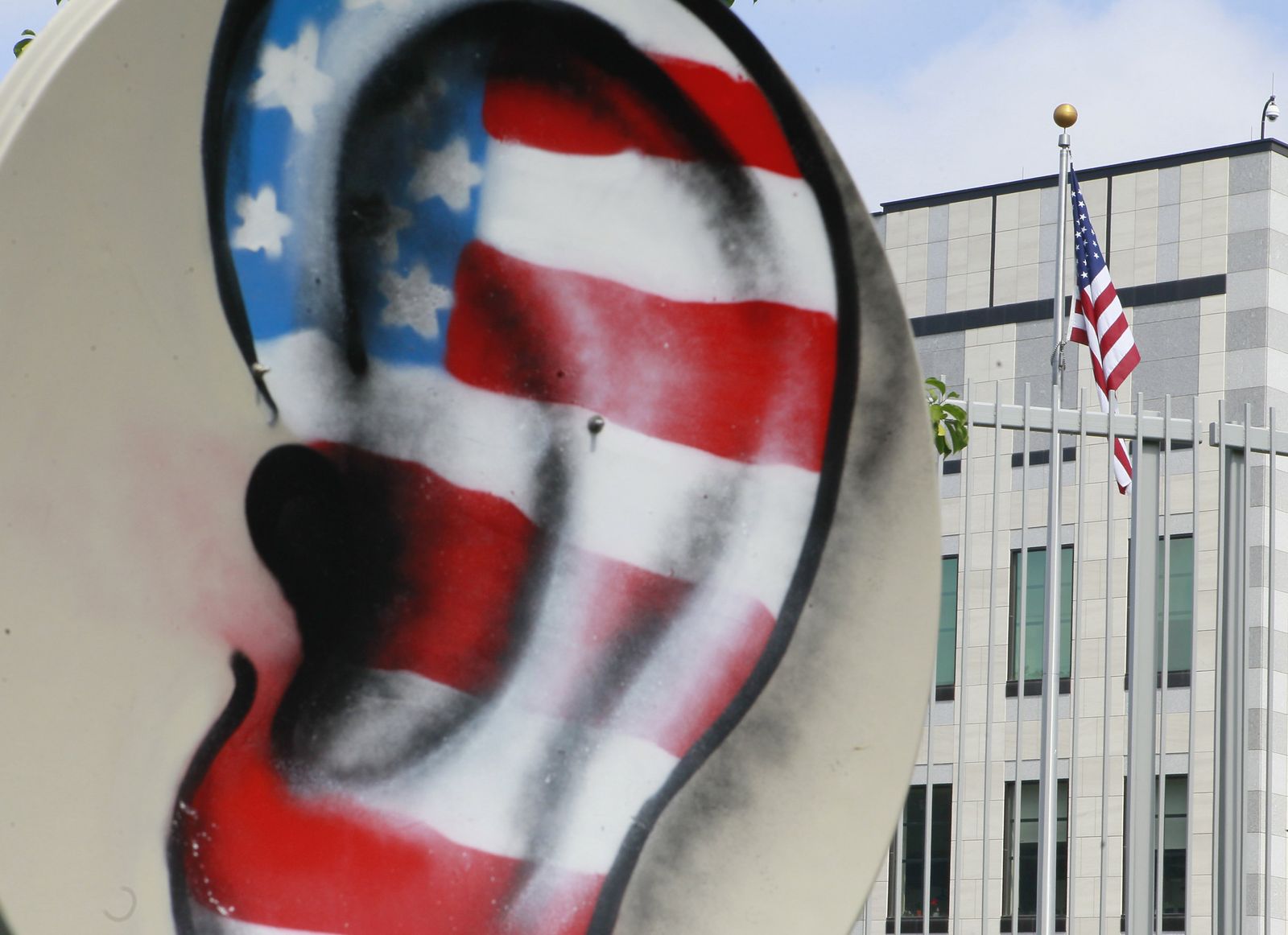 Europe is angry over revelations that the US has spied on European Union facilities. Elsewhere too, such as at this demonstration in Ukraine, citizens are upset with US surveillance practices.