When Jeanne Ponté wanted to go home, she found a man blocking her way to the exit. The Frenchwoman was coming from a meeting with lobbyists, and in the conference room she had already noticed an older man who kept staring at her. Now, with the meeting over, he caught the woman like a predator captures its prey. His hand grabbed the door jamb and he placed his arm like a gate just below her breasts. The lawmaker said: "You seem to be new here. Shouldn't we grab a drink?"

Ponté was a self-confident young woman who studied law and has a degree from the elite College of Europe in Bruges. But she didn't know how to react. She had only been working in the European Parliament for a few weeks and didn't want to cause a ruckus at one of her first official meetings. "I didn't want to make a drama out of it," she now says. Ultimately, she summoned up her courage and pushed the arm to the side. The man, a German delegate, is still a member of the European Parliament.

The nightmarish encounter, which took place in July 2014, became the first entry in a diary that Ponté has been keeping ever since. In the small book with a floral cover, she has been documenting the harassment faced by her and her colleagues at the European Parliament in Brussels. "I don't want to accept that this kind of behavior is normal," she says. "I want to create solidarity among those affected. " She has collected over 50 cases, the most recent entry is just two weeks old.

The European Parliament likes to be at the forefront of supporting women's rights in the developing world, but when it comes to protecting women in its own ranks, it is less eager. The institution has apparently neglected a sexism problem that has been rampant for years.

Ever since a growing number of women began revealing experiences of sexual assault as part of the #MeToo campaign in the U.S., women in Brussels have also been speaking up. Now the parliament has passed a resolution calling for its leaders to bring in independent experts. "We cannot clear this up internally," says French Socialist Edouard Martin. "Anyone who wants to clear the subject up internally is minimizing it." Yet even though the resolution had the support of a clear majority of the parliament, it isn't legally binding.

There have been indications of problems for quite some time. In January 2017, members of the anti-harassment committee wrote a letter of complaint to then parliament President Martin Schulz. They argued that the precautions against harassment and abuse needed to be improved as quickly as possible. But only now, almost a year and several concrete scandals later, is Schulz's successor, the Italian Antonio Tajani, taking action. He plans to present his suggestions by the end of the year.

For Victoria* Tajani's proposals will come too late. The British woman is sitting in a café across the street from the impressive parliamentary building, as a colorful melange of languages drifts through the space. It's lunchtime in the European Quarter. Victoria speaks quietly as she describes her harassment. In June 2009, she was accompanying her boss to lunch along with several colleagues. The meal was to be used to plan a coming election campaign, and a German political consultant had been invited.

Victoria, who was 22 years old at the time, sat next to the German. "Suddenly he shoved his hand under my butt," she remembers. "I sat there, like a stone, and didn't know what I was supposed to do." The hand stayed there for five minutes or longer. When two female colleagues went outside to smoke, Victoria joined them even though she was a non-smoker.

Terry Reintke, 30, is one of the people who wants to put an end to assaults like these. Even lawmakers aren't safe from sexist remarks, says Reintke, a Green party member from Gelsenkirchen in Germany. A male parliamentarian from Poland, for example, a member of the right-wing conservative PiS party, lauded the high proportion of women in the European Parliament in a committee meeting by saying: "That means I at least have something to look at."

Reintke is one of the few women who dares speak openly about sexual harassment. In early September, before the #MeToo campaign, she gave a speech in parliament about how she had been harassed in the train station in Duisburg. "A man came from behind and grabbed between my legs," she said. Reintke received a lot of respect for her appearance, but on Facebook, she faced malice and hatred. "Finally, someone actually touched you," was one of the milder comments.

Traditional power structures -- male boss, female employees -- famously facilitate abuse. This is exacerbated by the fact that the female lawmakers and assistants in Brussels are often working far from home, and that receptions and lots of alcohol replace meals at home with the family. This feeling of being on a school trip is especially strong when the parliamentarians meet once a month in Strasbourg.

On top of that, the European Parliament is still a way-station for men who were once important. Former commissioners, former party leaders and several big-name politicians spend their political twilight years here. "Many have the feeling that nothing can happen to me here," says Martin, the Socialist from France.

That also makes it difficult to organize help for the women affected. Although there has been an advisory committee for harassment complaints for several years, its work hasn't had much of an effect. "It is unrealistic to believe that women affected would turn to a committee composed of European parliamentarians," says Terry Reintke, "which is to say, to exactly those people that would need to condemn the person sitting next to them, or their colleague in the parliamentary group, in order for something to happen." This explains why former French environment ninister and European parliamentian Yves Cochet is one of only a few who have so far been accused of harassment. Britain's Sunday Times reported that he made inappropriate advances to a 25-year-old colleague, allegedly writing to her in a text message that she should share "passions, dreams and fantasies" with him.

As early as July 2013, more than four years ago, the European ombudsman, an independent complaints authority, had ascertained that the anti-harassment committee hadn't fulfilled its duty. A woman who sought help in May 2011 because of sexual harassment was only able to present her version of events in October 2012. "The 10-day deadline for an initial hearing was clearly not adhered to," claims the EU auditors' devastating report.

Nevertheless, the chairwoman of the anti-harassment committee, Elisabeth Morin-Chartier, refuses to involve external consultants in individual cases. "The process must remain confidential and internal," she says.

Jeanne Ponté's situation has improved since her boss, Edouard Martin, reorganized his office. The Frenchwoman is sitting in the 14th floor of the Brussels parliament building and holds her diary in her hand, a pressed gingko leaf between its pages.

In one of the entries, she describes how a parliamentary group colleague sent her an email in the middle of the night of photos he had secretly taken of her during a meeting. Prior to that email, the man had repeatedly asked her to go out with him. The morning after sending the email, he asked her how she had liked his photos. "I have more of them," he said. Jeanne Ponté consulted a lawyer, and her boss ensured that a different assistant would be responsible for working with the stalker in the future.

Ponté asked that the name of the nighttime email-writer remain confidential, as well as that of the German lawmaker who hassled her at the door in her first days as an assistant. "For me, it's not about a quick news story," she says. "I want to see structural changes." 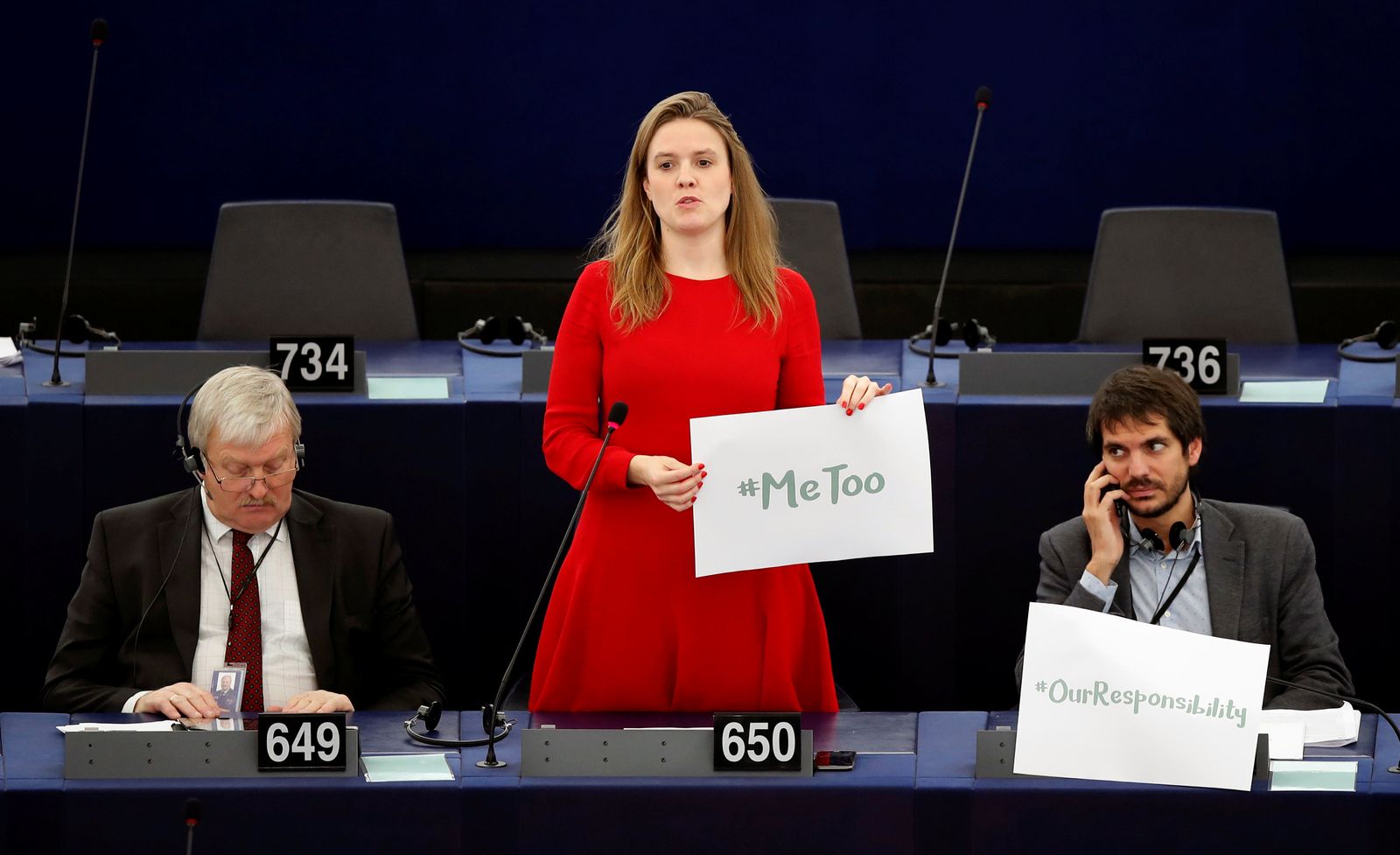