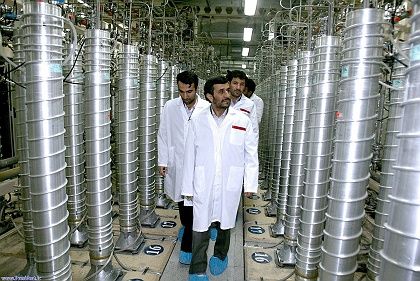 Iranian President Mahmoud Ahmadinejad visits one of the nuclear facilities.

Europe's agriculture ministers had been bickering over the usual topics for hours: the reform of agricultural policy, the economic misery of many fishermen, the import of genetically modified varieties of soy, the distribution of fruit and vegetables in schools.

Then they had to deal with a particularly unusual point on the day's agenda: the European Union's new list of terrorist organizations. Following an "exhaustive examination," according to the press release, the ministers voted unanimously in favor of the list.

However, those who took part in that meeting on July 15 recall that the submission was approved silently "without any discussion, without a single word being spoken and without a formal vote." Most of those present had "no idea" what the document was about. The agriculture ministers could hardly have realized that their silent decision would lead two months later to a huge political stir.

There is method to this democratic farce. Important EU decisions are regularly made by bodies that officially have nothing to do with the issue being voted on. The decisions have to be made by a "council," a collection of ministers from the 27 member states, which can be responsible for finance, health, labor or for dealing with the dear cows and their grass. The ladies and gentlemen of these councils don't have to discuss or even understand the laws they are enacting. They just have to follow their own government's guidelines. Blindly, to a certain extent.

The decision that the agriculture experts made in their meek ignorance had been prepared and formulated by a group that meets in secret. The names of the members of the group is classified as is the location where they meet and the dates of the gatherings. Every six months they update the so-called black list, which currently contains 48 organizations and 46 individuals suspected of terrorist activities. Those on the list can have their accounts frozen, and it is illegal to donate money to them or to support them in any other way. The organizations in practice lose the means to support themselves.

One of the groups on the list is the People's Mujahedin of Iran (PMOI), an Iranian dissident group. Its inclusion has long been the focus of controversy. Top European courts have accused the EU officials of having been far too lax in dealing with the truth and with fundamental principles of the rule of law.

The process by which the exiled Iranian opposition group was branded a terrorist group has been deemed unlawful by several courts. The courts have ruled that the fact that the parties involved have no opportunity to defend themselves is in contravention of their basic rights. Such concerns did not enter the minds of Europe's clueless agriculture experts when they approved the inclusion of the PMOI on the current list.

That was a crude "violation of the principles of the rule of law," according to prominent judges, lawyers and law professors from a number of countries who went to Brussels this week to vent their fury in the form of a collection of legal opinions.

Professor Antonio Cassese is one of them. The internationally respected lawyer was the president of the International Criminal Tribunal for the former Yugoslavia as well as the chairman of the UN's commission to investigate genocide in the Sudanese region of Darfur. The way the EU has dealt with the PMOI, he argues, is contrary "not only to the text of (EU) Community law but also to some fundamental human rights."

The EU's conduct "undermines the rule of law" and amounts to a "misuse of power," writes Lord Slynn of Hadley, who was for many years one of the most senior judges in Great Britain and in Europe. London-based law professors Sir Geoffrey Bindmann and Bill Bowring regard the process as "shocking."

In short: the elite of Europe's legal profession are appalled.

The roots of the controversy stretch back almost 30 years. The PMOI was founded by left-wing students who together with the followers of the Ayatollah Khomeni deposed the Shah of Iran in 1979. The revolutionaries began to disagree and when Khomeni's mullahs seized power the PMOI turned to violence. Many people died -- in the attacks by the PMOI and on the mullahs' gallows. In 1981 the dissidents fled to Iraq and under the protection of Saddam Hussein they launched attacks against the Ayatollah regime in Tehran. When Saddam was toppled, the Mujahedin disbanded their army.

Their Paris-based leadership in exile swore off the armed struggle in 2001. When the EU and the US placed dozens of organizations and individuals on a "black list" after the attacks of Sept. 11, 2001, the PMOI was not included. The West was grateful for its information about Iran's nuclear program. That did not suit the regime in Tehran.

The mullahs complained to Berlin, London and Paris and pushed for the hated and feared PMOI to be declared a terrorist organization. And they succeeded, as the former British Foreign Secretary Jack Straw freely admitted later in a BBC interview. He said that in 2002, in order to accommodate Tehran, London declared there was evidence that the Iranian exiles were involved in terrorist activities.

Britain's EU partners followed suit, without particularly concerning themselves with this "evidence." Every six months the list was "examined" and the result for the PMOI was always the same: at the request of the British interior minister the group stayed on the list.

It was only years later, following a prolonged legal battle instigated by the PMOI, that the British justice system declared that there was no such proof and there never had been.

According to a ruling by the country's most senior judge, the British can no longer tell their EU colleagues that the Iranians are suspected terrorists. But then the French jumped in. In July they suddenly found evidence against the PMOI. This "new" evidence is old, according to insiders. Accusations that date back to before 2001 gave the French authorities the opportunity to open up an investigation in some PMOI members. That was enough for the secret anti-terror group in the EU to keep the group on the black list, this time at the request of the French rather than the British.

However, for some European Parliament members this was a step too far.

A year ago more than 100 members of the European Parliament (MEPs) protested against Brussels' strange list. The Austrian Liberal politician Karin Retarits railed that it was a "scandal," while the German Green MEP Cem Özdemir said that it "should not continue" in this way.

But it did continue.

Now, following the massive criticism by the prominent lawyers, the parliamentarians are having another go. Spain's Alejo Vidal Quachas, vice president of the EU parliament, described the EU's treatment of the Iranian dissidents as "politically, legally and ethically wrong" and he announced massive opposition.

It is doubtful that the new protest by the MEPs will have much influence on the governments in London, Berlin and Paris. The terrorist label for the biggest Iranian opposition group is an important trump in the delicate game being played between Tehran and Europe. Many EU countries have important trade links with Iran, German companies alone generate around €4 billion there every year. And French oil companies also have a heavy presence in Iran. These companies, according to sources in diplomatic circles, have put the French government under pressure to do Tehran a favor and keep the PMOI on the black list.

Will this geniality toward the fundamentalists who would not only like to see Israel wiped from the map but are rushing to build their own nuclear bomb pay off in the end? The Europeans' hopes of dissuading Tehran from going ahead with its nuclear program through a mixture of carrots and sticks has not been shown much success so far. Quite the opposite in fact.

The International Atomic Energy Agency announced this week that Iran is increasing the efficiency of its centrifuges which it has constructed to produce enriched uranium. The country is now one-third of the way toward building a bomb that could threaten the world. And now the French government is demanding more UN sanctions against Iran.

Do the people pursuing these confusing policies still understand what they are doing?