"I find it almost unbearable that religious services can only take place with police protection."

"Anti-Semitism is one reason for me to leave Germany because I want to protect my family from any danger."

"The anti-Semitic insults I have experienced were not from neo-Nazis or from leftists, but from ordinary people of the political center."

What is it like for Jews to live in Europe? Are they able to practice their religion without restraint? Seventy-five years after the beginning of the Kristallnachtpogrom, also referred to as the "November pogroms," how much harassment, discrimination and hate crime do they encounter?

On Friday, the Vienna-based European Union Agency for Fundamental Rights (FRA) released a report titled "Discrimination and Hate Crime against Jews in EU Member States: experiences and perceptions of antisemitism." The online survey polled 5,847 self-selected individuals who identified as Jewish in Belgium, France, Germany, Hungary, Italy, Latvia, Sweden and the UK, states in which an estimated 90 percent of European Jews live.

The survey's results provide insight into the perceptions, experiences and self-conception of European Jews. Rather than supplying absolute figures on anti-Semitic attacks, the study focuses on the perceived danger of such attacks and how much the anxiety this causes affects their lives.

The study also examined whether these incidents made it into official statistics. The overwhelming majority of respondents (82%) said that they had not reported to any authority or organization "the most serious incident, namely the one that most affected them."

In Germany, the KPMD, a service for registering crimes, has recorded a decline in anti-Semitic crimes since 2009. However, by itself, that says nothing about the perceptions of Jews living in Germany. According to the FRA report, 63 percent of the Jewish respondents in Germany have avoided "wearing, carrying or displaying things that might help people identify them as Jews in public," such as a skullcap (kippa). Likewise, 25 percent of them claimed to have considered emigrating from Germany in the last five years because they don't feel safe there.

When it comes to the relative seriousness of anti-Semitism, Germany was the only country in which a majority (61%) of respondents said it was the greatest problem. Respondents from the other seven countries believed that unemployment was the most pressing issue.

In the report, FRA states that a survey it published in 2012 had "found evidence suggesting that events in the Middle East can act as a trigger for translating anti-Israel sentiment into antisemitic sentiment targeting Jewish populations as a whole." For the poll published Friday, 49 percent of respondents in Germany claimed to have heard or seen non-Jewish people suggest that Israelis behave "like Nazis" toward the Palestinians. The study's results seem to suggest that German Jews are viewed as proxies of the state of Israel and its policies. Indeed, it found that 81 percent of them have felt accused of or blamed for something the Israeli government had done. Moreover, it noted a close coincidence between when trouble flares up in the Middle East and when Jews in Germany perceive rising hostility.

"One reason (not the only one!) for the latent anti-Semitism is the open conflict between Israel and Palestine and other neighboring Arab countries. A peaceful solution to this conflict would also reduce the ground for anti-Semitism in other countries."

The study also found that respondents claimed that they had been increasingly exposed to negative statements about Jews online, including on blogs and social-networking sites. Three-quarters (75%) of all respondents in the eight countries identified the Internet as "the most common forum for negative statements" and a place where such statements could be made with virtual impunity. This was particularly true for respondents between the ages of 16 and 29, of whom 88 percent said that they saw or heard negative comments about Jews online.

Worries about suffering verbal or physical attacks, the study notes, have been found to have negative effects on physical, social and emotional well-being by prompting people to restrict their movements or activities. Almost a quarter (23%) of respondents claimed to avoid visiting Jewish events, sites or parts of their neighborhoods because they don't feel safe there or on the way there owing to their Jewish identity.

The survey also found that Jews living in Germany were particularly concerned with two issues that have sparked much debate in recent years: the prohibition of circumcision (brit mila) and traditional Jewish rituals associated with slaughtering animals (shechita). Almost three-quarters (71%) said that banning circumcision would be a "very big" or "fairly big" problem for them, while half (50%) held the same view regarding prohibitions on traditional slaughter.

"I will wait for the developments concerning a statutory regulation on the Brit Mila. This will be crucial for my decision on whether or not to leave Germany."

* The quotations in italics are statements made by Jews living in German who responded to the survey online. Translations are taken directly from the report. 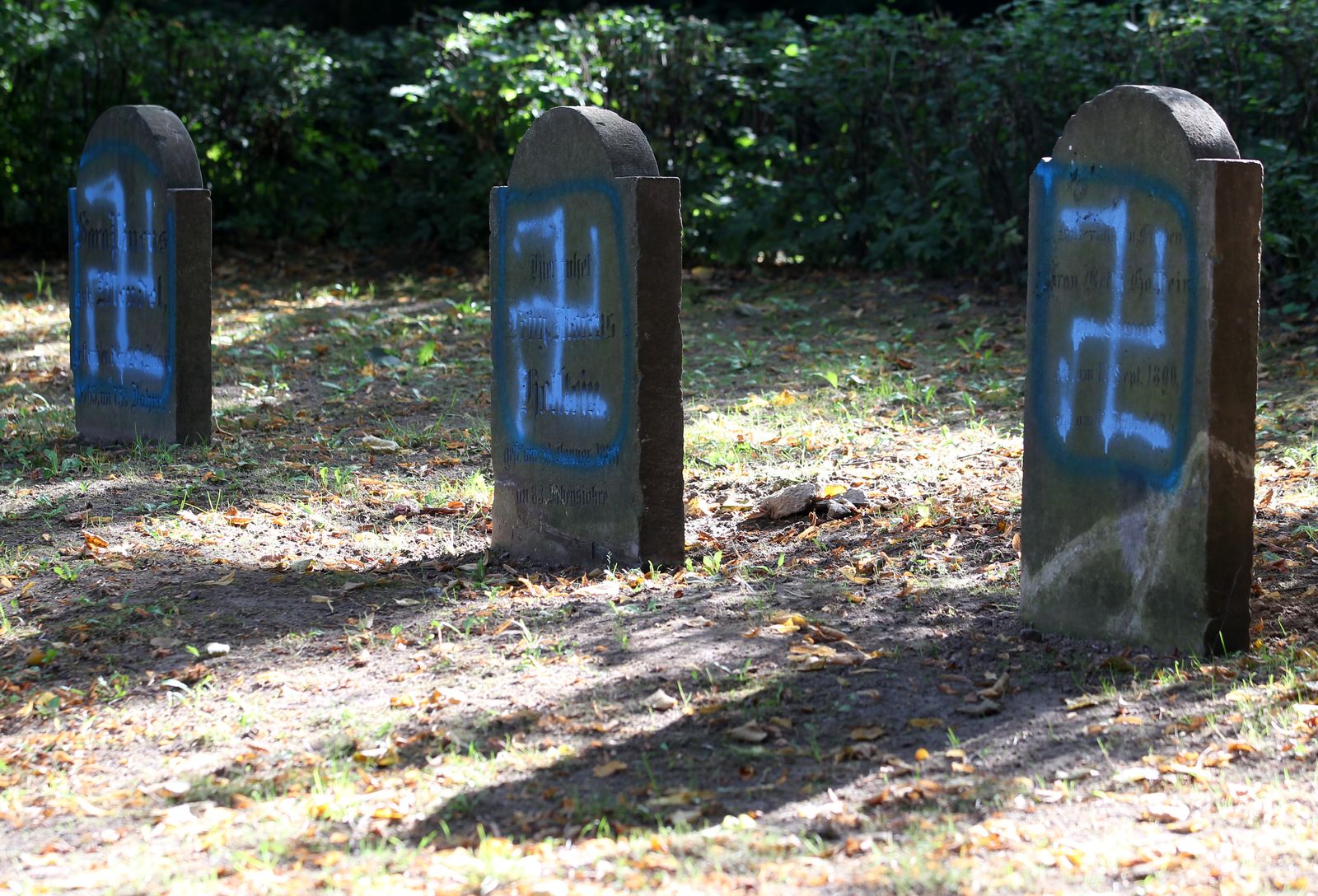 Gravestones desecrated with swastikas in a Jewish cemetery in northeastern Germany.