Greek Prime Minister Giorgios Papandreou was notably silent during dinner in the European Council building in Brussels on Thursday night. Everything, after all, had already been said. As the European Union summit began, he had been hoping for yet another clear indication that the EU was completely supportive of Greece -- and he got what he wanted.

The 27 EU heads of government and state granted their approval for a second aid package for Greece -- on the condition that Papandreou, 59, and his socialists are able to push yet another austerity package through the Greek parliament on June 28.

At their traditional meeting prior to the summit, conservative heads of state and government turned up the pressure on the conservative head of the Greek opposition, Antonis Samaras. He has presented himself as a staunch opponent of further austerity measures in Greece -- and should he be successful in torpedoing the package in next week's vote, it could very well lead to a cessation of foreign aid payments to Athens and the insolvency of his country. The consequences for the European common currency and for the global economy would be immense.

The debate among the conservatives was unusually passionate. Diplomacy was set aside, and Samaras was left in no doubt that his European colleagues were furious with the course he has chosen to chart. One leader spoke of his positive experiences with the International Monetary Fund (IMF) and suggested that Samaras follow its advice. Swedish Prime Minister Fredrik Reinfeldt said that "it is very important that no Greek political leader tells the Greek people that they have a shortcut."

German Chancellor Angela Merkel -- pointing to the fact that Samaras' conservative party had been in power for years prior to Papandreou's election in 2009 and was thus equally responsible for the country's untenable national debt -- said that Greek conservatives should accept their "historical responsibility."

Still, few concrete results emerged from the EU summit on Thursday evening. Even as leaders sought to provide their backing to Papandreou's course, rhetoric trumped resolutions. Before the summit even began, Merkel had said that no "operative resolutions" regarding further aid to Greece could be expected.

Indeed, the timeline for putting together a new bailout package was agreed to by euro-zone finance ministers last Sunday in Luxembourg. By the time the group meets again, on July 3, the basic elements of such a package will have been worked out. Only then will it become clear how big the package will be (initial estimates go as high as €120 billion, or $172 billion) and to what degree private investors will be expected to contribute.

With his thin parliamentary majority (Papandreou's socialists control 155 seats in the 300-seat parliament), it is seen as likely that the prime minister will be successful in pushing through the austerity program. Even so, Samaras will have to step back from his current hardline position. The IMF demands broad support from both parties before it will agree to a package that extends beyond the current legislative term. Samaras will have to convince the IMF that he would not annul the austerity package should he become Greece's prime minister.

The European leaders gathered in Brussels also looked beyond the acute problems in Greece to address a long-term reform of the euro zone. There too, however, a final decision must wait. Earlier this year, Merkel had hoped that all elements of a far-reaching reform would be approved all at once. But, instead, it now appears that the euro-zone reform will be piecemeal.

Still, this week, EU leaders hope to reach final agreement on the euro backstop. On the one hand, the temporary European Financial Stability Facility (EFSF), set to expire in 2013, is to be boosted to make €440 billion available to bailout debt stricken euro-zone members. On the other, the European Stability Mechanism, the permanent fund that will succeed the EFSF, can now be sent to national parliaments for ratification.

The funds are designed to prop up the common currency should the debt crisis continue to spread. But just as important are measures to prevent future crises -- and finding agreement on such measures is proving to be much more difficult.

On the table are the tightening of the stability pact to ensure that countries keep firm control of their budget deficits as well as a pact to boost competitiveness. The first is known as the Six Pack (because it consists of six legislative proposals by the European Commission); the second is simply called the Euro-Plus Pact.

Both, though, fall short. Governments are still not in agreement with the European Parliament over the tightening of the stability pact. One point in particular is disputed: The EU states want to keep the final say on the imposition of sanctions on errant members. Parliament members, however, want automatic sanctions. The less political influence in such a situation, the better, said European Parliament President Jerzy Buzek. An agreement is not expected until the fall.

The competitiveness pact, meanwhile, does not live up to its name. It is intended to encourage governments to better coordinate their economic policies. But as long as it remains a list of vague promises of reform in tax, social and wage policies, no government will be forced to implement any of it. Each member country must submit a national reform program in Brussels each year, but the German government managed to provoke a rebuke for its first attempt: The Commission's verdict was that the proposals from Berlin were "not very ambitious." The situation is similar in other countries.

In the coming days, however, EU leaders will be closely following events in Athens. Whether the collective outrage has had much of an effect on opposition leader Samaras is questionable; he has already committed too much to his position. Nevertheless, the summit participants were optimistic -- they believe there is a high probability that Papandreou will succeed.

It is unclear, however, if there is a Plan B in case the austerity package fails to be approved by parliament. What would the euro-zone governments do? There was once again no answer forthcoming in Brussels -- except for the affirmation from euro group head Jean-Claude Juncker that there is no Plan B.

The position of government heads is tricky. Parliament President Buzek described it in a particularly poetic way: "We are like Odysseus, who must sail between the Scylla of mistrustful financial markets and the Charybdis of growing discontent amongst the population." But in the end, Buzek added, a safe harbor awaits. 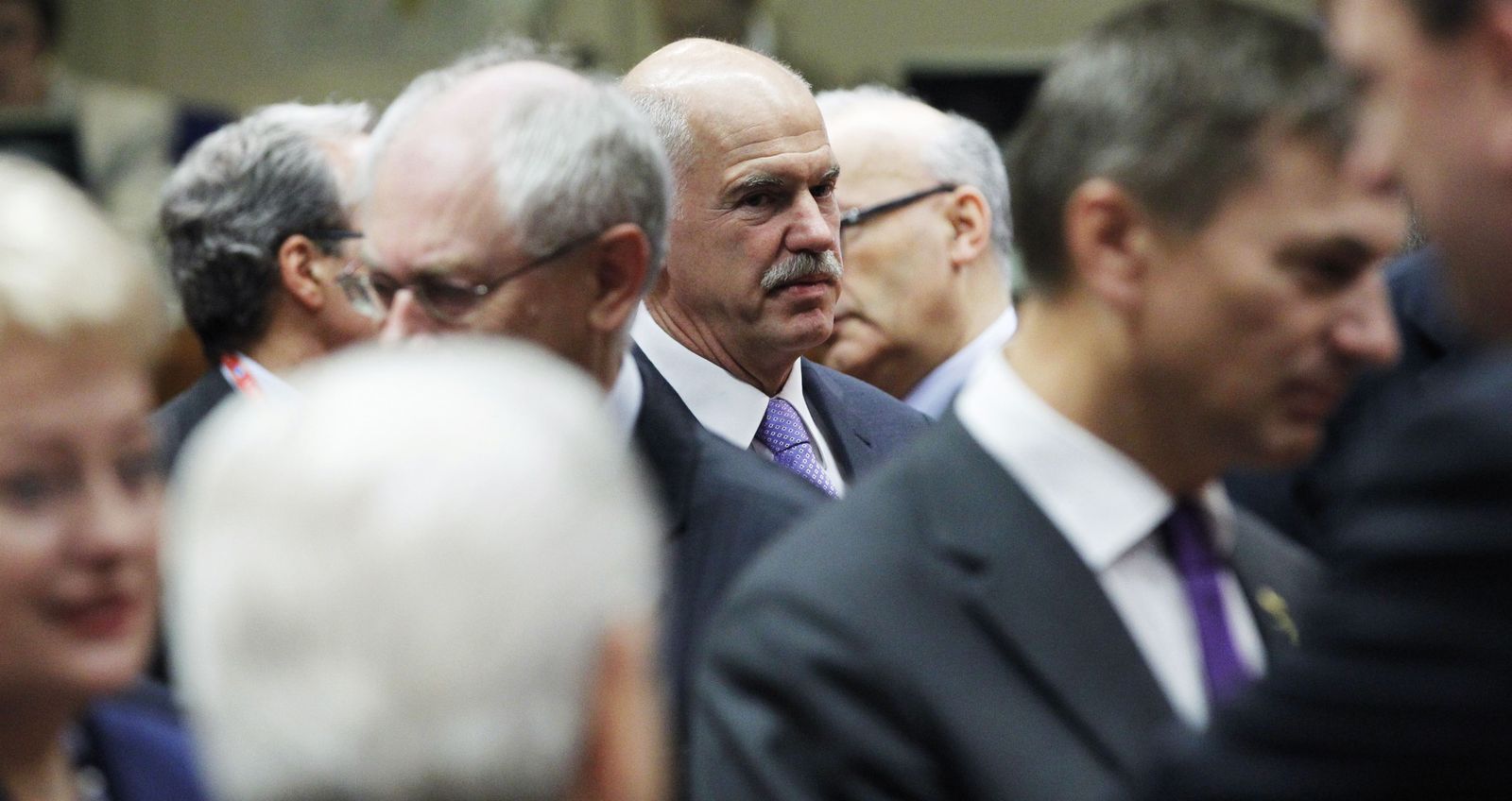