Following an exhausting recent stint of crisis diplomacy, top German officials had one big wish ahead of Thursday's European Union summit: This should be a "normal summit," the Berlin Chancellery hoped, not just another bailout. Amid expectations that there was little to be discussed, the 27 leaders' meeting was shortened from the usual two days to just one.

But in recent days, dark storm clouds re-emerged. The media rumored that a rescue package for Spain was in the works. Nonsense, replied Madrid, Brussels and Berlin indignantly. Following the Greek experience, their denials have lost credibility. At least they agree on one point this time round: They do not want to fuel market speculation.

National leaders gathering in Brussels this Thursday will still probably not be able to avoid addressing the Spain issue with a statement. On the heels of the European Commission's praise for the €65 billion ($80 billion) Spanish savings package, member states now need to give verbal support to their ailing partner.

German Chancellor Angela Merkel set the tone on the eve of the summit. Speaking at a preparatory meeting, she said the reforms just passed by the Spanish government had made an important contribution to European competitiveness. "I think we should encourage Spain that it is on the right track," Merkel said.

It is likely that the Spanish Prime Minister Jose Luis Zapatero will, once again, explain his country's predicament to his colleagues. But the other leaders do not want to divert their agenda towards the Spanish situation. Swedish Prime Minister Fredrik Reinfeldt insisted that he does not think that any one particular country will be under discussion.

Instead, all the EU countries attending the summit are expected to commit themselves to austerity measures. "All member states are ready, if necessary, to implement additional savings measures, in order to boost budget consolidation," the draft of the summit declaration states. Germany has already raised the bar with its €80 billion savings package. On the eve of the summit, France also announced its plan to increase the retirement age in that county from 60 to 62.

Two core issues the heads of government want to discuss immediately after breakfast on Thursday are:

A task force under the leadership of Herman Van Rompuy, the president of the European Council -- the body which includes the heads of state and government of the 27 EU member states -- has been working since February on proposals for the reform of the euro zone. At lunch on Thursday, the Belgian is expected to present a progress report. The heads of government want to give their blessing to individual "orientations" on Thursday, but the working group's closing report is first expected in October.

What will be absent from Thursday's discussions is the demand by France to upgrade the so-called Euro Group of the 16 euro-zone members to an economic government with a permanent secretariat. But French President Nicolas Sarkozy yielded on the issue during his meeting with Merkel in Berlin on Monday. Instead, economic policy decisions will be made, as they have been so far, at meetings of all 27 EU leaders.

With that move, Merkel has effectively limited further political integration. Her position is to take care of the most pressing issues first. She sees the three major rescue packages passed by the EU so far (to rescue the banks, Greece and then the euro) as proof that, in emergency situations, the European Council already has the capacity to act as an economic government, and she doesn't believe that new institutions are necessary.

One area where the leaders of EU member states are unanimous is that the EU should have greater influence on national budget policies. In the future, they would like to see some benchmark data reported to Brussels and cleared by the EU before budgets are finalized. The details are still being wrangled over, but the direction is clear: The "preventative arm" of the Stability and Growth Pact must be strengthened, the draft summit statement declares.

In particular, Germany is pushing for more monitoring and an early warning system. Merkel is also demanding sanctions against repeat violaters of the Stability and Growth Pact's 3 percent limit on deficit spending, going as far as to strip them of voting rights in the European Council. That, however, would require a change to the European Treaty -- something most governments want to avoid at the moment. British Prime Minister David Cameron, who will be attending his first EU summit on Thursday, openly warned of a British veto a few weeks ago on his visit to Berlin.

In Berlin, the dreams of a change to the treaty persist -- it will have to be changed anyway by 2012, at the latest, when Croatia is set to join the bloc. A few extra budget rules could be added at the same time, the argument goes.

Thursday's meeting is unlikely to dispel the many sharp differences of opinion on the European budget and economic policy. It will be Van Rompuy's task to find a compromise within the working group by October.

The Europeans will find it easier to agree on a banking levy. They want to present this demand at next week's G-20 summit in Toronto. Under the plan, a special tax would be imposed on banks in order to force them to cover the costs of the next financial crisis themselves. The idea is popular in Europe and the United States, but Japan, Australia, Canada, China and Brazil have already dismissed it. The levy is, therefore, already regarded as dead in the water.

The same can be said for the financial transactions tax, another of Merkel and Sarkozy's pet projects. A tax would be imposed on all transactions in order to dampen speculation on the financial markets. However, the idea cannot even win approval within the EU, never mind the G-20. Cameron may have pledged not to appear too unpleasant at his first EU summit, but he is unlikely to go stomach any such tax. 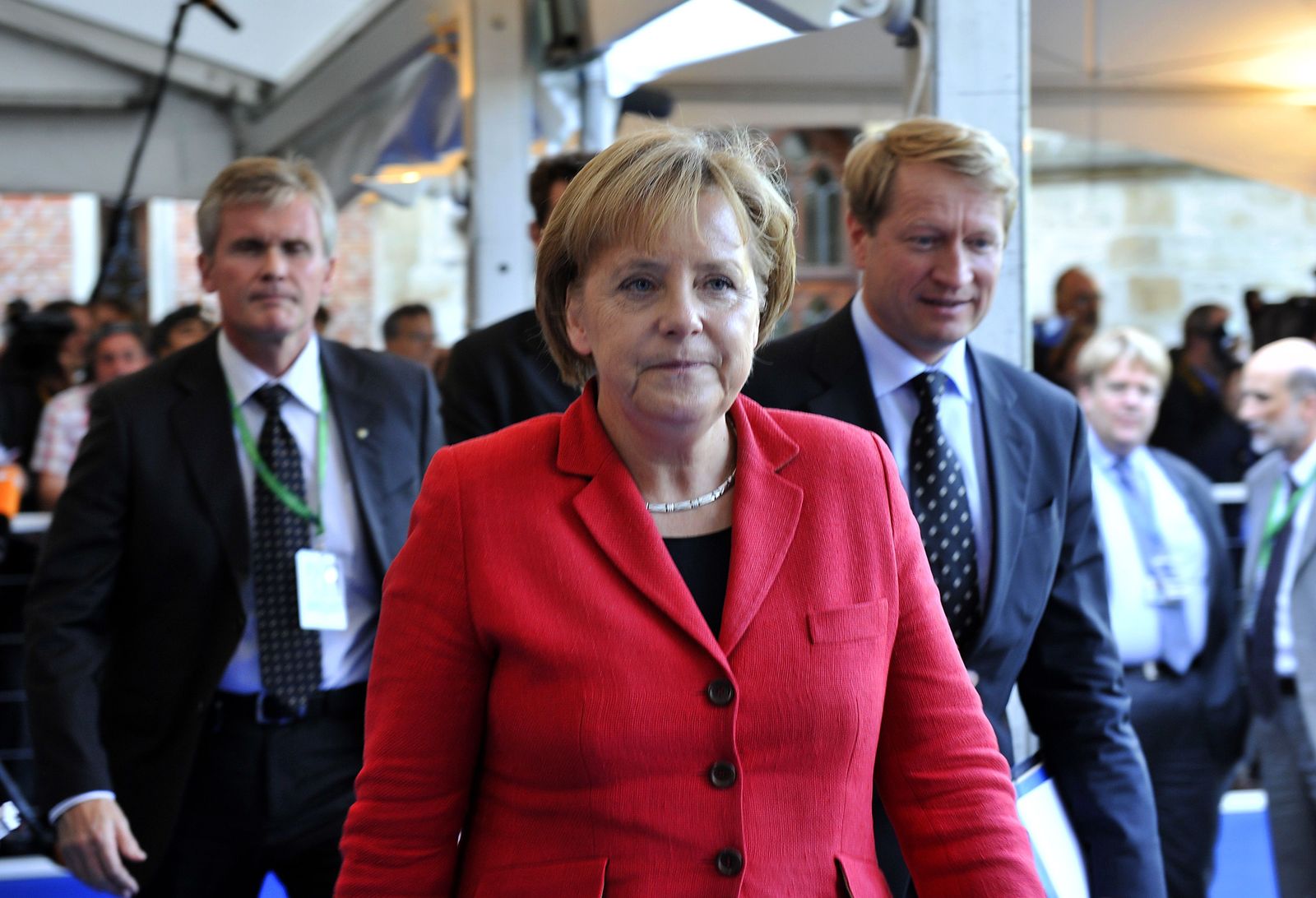 Sleeves rolled up? German Chancellor Angela Merkel in Brussels for the EU summit.