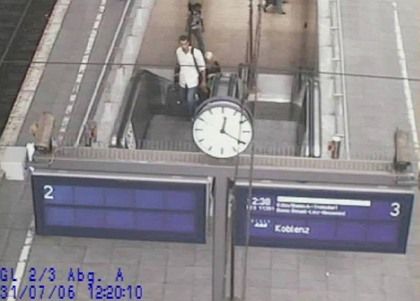 The failed suitcase bomb plot in Germany was the only Islamist terrorist attack in the EU in 2006, according to the Europol study. Here German CCTV footage shows Jihad Hamad, one of the main suspects in the plot, at Cologne railway station.

Almost all the terrorist attacks in the European Union in 2006 were unrelated to Islamist terror, a new report reveals -- but the potential impact of an attack aimed at mass casualties made Islamist terrorism a top priority for European investigators nonetheless.

According to a report released Tuesday by Europol, the European Union's law enforcement organization, 498 attacks were carried out in the EU in 2006. Of them, only one -- the failed suitcase bomb attacks in Germany -- was perpetrated by Islamist terrorists.

The vast majority of terrorist attacks were carried out by separatist terror groups targeting France and Spain. Almost all attacks "resulted only in material damage and were not intended to kill," the report's authors write.

However, Islamist attacks such as the German plot and the foiled airplane mass bomb attacks in the United Kingdom were aimed at mass casualities, the report points out. As a result, "investigations into Islamist terrorism are clearly a priority for member states law enforcement," the report writes. Half of the 706 terrorism-related arrests made in 2006 were related to Islamist terrorism, with France, Spain, Italy and the Netherlands having the highest number of arrests of Islamist terrorist suspects.

A small number of attacks by left-wing and anarchist terror groups were also carried out in Germany, Greece, Italy and Spain. The report concluded that France, Spain and the UK are the EU member states "most severely affected" by terrorism.

One of the two main suspects in the German suitcase bomb plot, Jihad Hamad, went on trial in the Lebanese capital Beirut Wednesday with three other Lebanese suspects. However the trial was immediately adjourned to April 18, as the defense had asked for the trial to be relocated to the northern city of Tripoli because the defendants are all from northern Lebanon. The other main suspect, Youssef Mohammed el-Hajdib, is in custody in Germany, but will also be tried in absentia by the Lebanese court, according to media reports.

Meanwhile a new report by the UK-based think tank the Oxford Research Group has warned that British and American policy towards Iraq has "spawned new terror in the region." The report, "Beyond Terror: The Truth About the Real Threats to Our World," said that the ongoing war on terror and particularly the war in Iraq were increasing the risk of future terrorist attacks on the scale of those of Sept. 11, 2001.

"Treating Iraq as part of the war on terror ... created a combat training zone for jihadists," it said, and also warned that any military intervention in Iran would be "disastrous." The report added that the United States is "increasingly viewed as the greatest threat to world peace."